An NHS finance chief stole £50,000 from a ‘vulnerable’ elderly relative to help pay for her daughter’s school fees and pay off her mortgage, a tribunal heard.

Janet Ashby took the cash from the family member, referred to only as Mr A, after persuading him to let her oversee his assets.

Ashby, who worked for Barnsley Hospital before she was sacked and later jailed over the theft, was ‘living beyond her means’ after taking the money, a disciplinary panel for the Institute of Chartered Accountants in England and Wales (ICAEW) was told.

Mr A was described as an elderly man whose assets were ‘a small amount of savings and a house’.

The house had no mortgage as he had ‘paid it off’ during his working life.

The hearing was told ‘mean’ Ashby, 55, began caring for her relative when his wife died, and later persuaded him to give her power of attorney and control over his financial affairs. 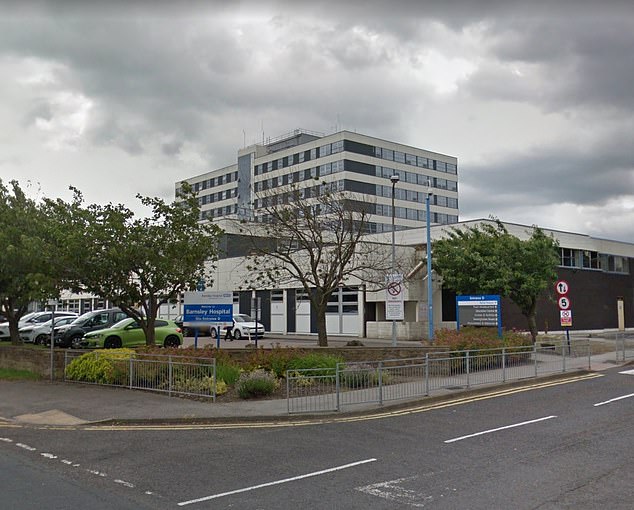 Janet Ashby worked as a Finance Director at Barnsley Hospital, pictured, but was sacked and later jailed over the theft

The former Finance Director of Barnsley Hospital then convinced him to take an equity release of £64,500, in May 2013.

Ashby had assured him the money would be spent on ‘converting her house’ so he could ‘go and live with her family’ instead of in a care home, where he didn’t want to go.

The money was placed in a shared account between Ashby and Mr A, who trusted her to act ‘in his best interests’.

The panel was told that she used the money to ‘pay her daughter’s school fees’, ‘pay off some of her mortgage arrears’ and ‘buy presents for her children’.

Ashby, of Low Barugh, Barnsley, was sentenced to two and a half years in prison after being convicted of theft at Leeds Crown Court in June 2018.

During her trial she accused Mr A of ‘being confused’ and ‘forgetting what he had promised to give her’.

The court also heard that she ‘hid her actions’ from Mr A’s son, who was ‘intended to be the beneficiary under his will’.

His Honour Judge Guy Kearl QC told the court: ‘Mr A put his financial affairs in [Ashby]’s hands knowing that she was an accountant and someone who he thought could be trusted.

‘[She] exploited that trust. She siphoned off the money, without keeping any record of what she was doing.

‘She hid her actions from Mr A’s son, who she knew was intended to be the beneficiary under his will.

‘There was evidence that, despite having had a well-paid job with the NHS, [Ashby] had been living beyond her means.

‘Mr A trusted [Ashby] to act in his best interests. However, she did the opposite.’

The details came to light in a judgement this week after Ashby successfully lodged an appeal against £4,350 in costs she was ordered to pay after being stripped of her ICAEW membership in 2019.

She argued that she ‘did not have the means to pay’ and was ‘heavily bankrupt’ and the panel this week reduced her costs to £500.

Ashby was also dismissed from her job as Finance Director at Barnsley Hospital Foundation Trust for gross misconduct in 2015, after a multi-million pound black hole was found in its accounts.