New South Wales has recorded no new cases of coronavirus but restrictions will remain in place until Monday morning.

A Sydney couple infected by the ‘double mutant’ Indian variant of the disease tested positive on Wednesday and Thursday.

The B.1.617 strain was identified in the subcontinent in October, with two key mutations to the outer-spike protein that helps the virus bind and enter cells.

The couple have the second of three subvariants known as B.1.617.2. Scientists are not yet sure if the strain is more infectious or more deadly than original Covid, but many fear it probably is. 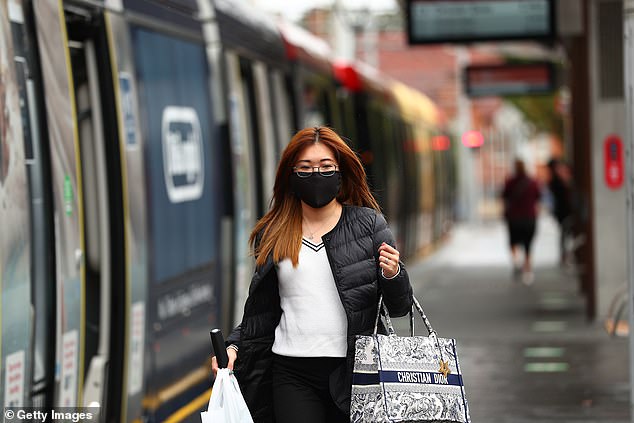 The Sydney couple who have mysteriously tested positive to coronavirus are infected by the ‘double mutant’ Indian variant of the disease. Pictured: A Sydney commuter

University of Sydney virologist Megan Steain told the Sydney Morning Herald: ‘The rate at which [the variant] seems to be spreading in India suggests that it may be transmitted more efficiently than earlier variants of the virus.’

India has suffered a wave of coronavirus cases and deaths in recent weeks, with a record 412,262 new cases on Wednesday.

Scientists believe current vaccines are effective at stopping severe disease from the Indian variant – and are urging people to get their jab as soon as possible.

SA: Banned people who have been to exposure sites

WA: People who have been to exposure sites must hotel quarantine

QLD: People who have been to exposure sites must hotel quarantine

NT: People who have been to exposure sites must self quarantine

ACT: People who have been to exposure sites must self quarantine

VIC: People who have been to exposure sites must self quarantine

TAS: Banned people who have been to exposure sites

The infected couple are believed to have caught the virus from a mystery person who caught it from a US traveller in hotel quarantine.

The outbreak prompted tough new restrictions for all of greater Sydney at 5pm on Thursday, including mandatory masks indoors, because of the ‘missing link’ – with contact tracers now racing to find the mystery infected person within the next three days.

Other states have taken a more relaxed approach to borders than last year, with only South Australia and Tasmania banning travellers from exposures sites.

Western Australia and Queensland are requiring exposed people to do hotel quarantine, while other jurisdictions only require self-isolation.

NSW Premier Gladys Berejiklian hopes to ease the restrictions as planned on Monday morning, but could extend the rules if the mystery link is not found.

The man in his 50s travelled across Sydney’s eastern, northern and western suburbs over the weekend while on a quest for a new barbecue.

NSW Health fear there is at least one other person who has been unknowingly infected.

Using genome sequencing, experts linked the cases to a returned traveller from the US who has the virus, but so far they cannot explain how the traveller in hotel quarantine infected a couple from the eastern suburbs.

NSW Chief Health Officer Kerry Chant explained the restrictions were brought in predominantly because they couldn’t figure out how it passed from the US traveller to the couple. 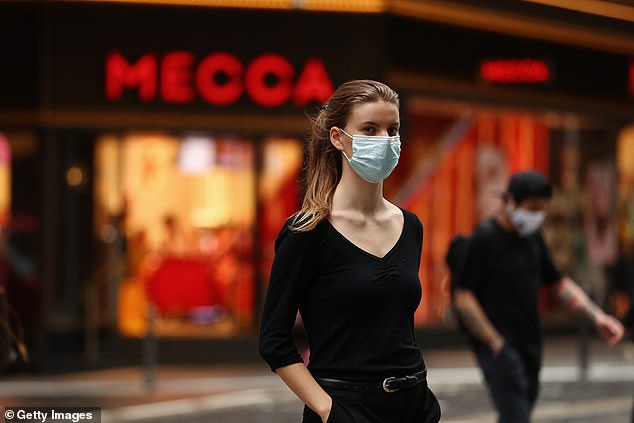 Greater Sydney, including Wollongong, the Central Coast and the Blue Mountains, are now under new restrictions (pictured, a women wears a face masks as she walks along Sydney’s George Street on Thursday) 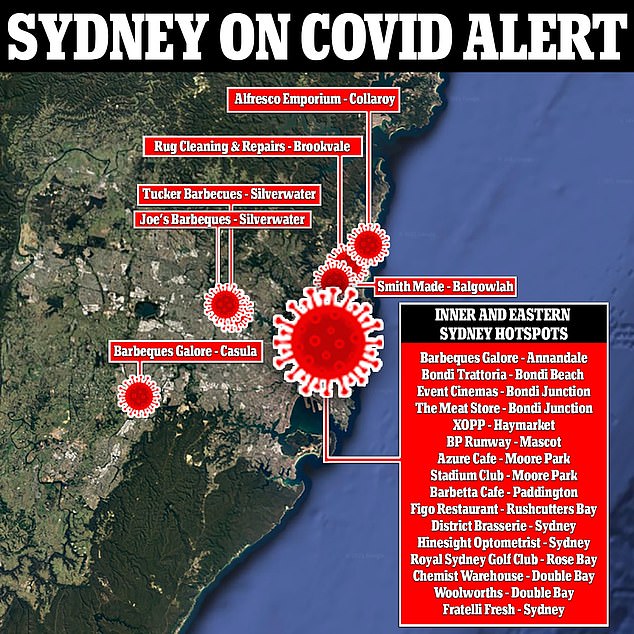 Both have a ‘high viral load’ meaning they are very infectious, pointing to an undetected case lurking around the city who is also still able to infect others.

Experts now have until Monday morning to find the mystery case or the tough new restrictions – which ban Sydneysiders from dancing, standing in pubs, shopping without a face mask, or have more than 20 people over on Mother’s Day – could be extended.

‘What we’re concerned about is that there is a missing link,’ Dr Chant said.

‘We can’t find any direct link between our case, so what we’re concerned about is there is another person as yet unidentified that infected our case.’

Ms Berejiklian agreed, saying the rules were a ‘proportionate’ response while health officials tracked the source of the infection.

Health workers have been trawling through CCTV footage to try and work out how the mystery transmission occurred. 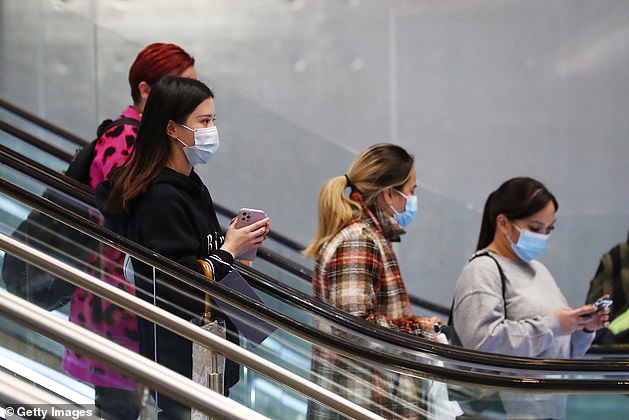 The window of transmission is likely between April 26, when the traveller arrived and quarantined at the Park Royal Hotel in Darling Harbour, and April 29, when they were moved to special health accommodation after testing positive on April 27.

The US traveller was staying in the Darling Harbour hotel, which is not one of the 14 suburbs listed in the man’s extensive search for the perfect outdoor cooker on Saturday and Sunday.

An increase in case numbers would also impact the government’s decision to ease or extend restrictions. 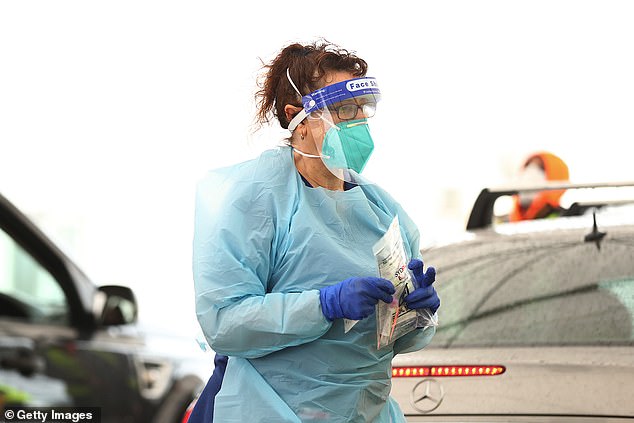 A nurse collects Covid-19 test samples at the Bondi drive-through testing clinic on May 6, with a huge increase in testing numbers expected thanks to the two new cases

THE 14 SYDNEY SUBURBS ON ALERT:

Previous infections in Sydney have been the result of contact with transportation between the airport and quarantine facilities.

An outbreak in south-west Sydney in December was revealed to have been started by a bus driver who carried infected passengers to and from the airport.

With strict controls in NSW’s quarantine hotels, there are concerns it is this stage of the journey where the virus can slip out.

The NSW premier and Dr Chant on Wednesday said the infected man had a ‘high viral load’ and was potentially highly infectious while in the community.

On top of the 14 suburbs, a range of eateries, entertainment venues and stores were put on alert after the infected man’s jaunt around the city.

Ritzy Chinese eatery XOPP in Haymarket was added to the lengthy list on Thursday.

Anyone who attended the two venues at the times specified is asked to get tested and isolate until NSW Health provides further advice.

Dancing and singing are banned, except at weddings where 20 people are allowed to gather on a dancefloor, and face masks will be mandatory indoors and for hospitality workers. 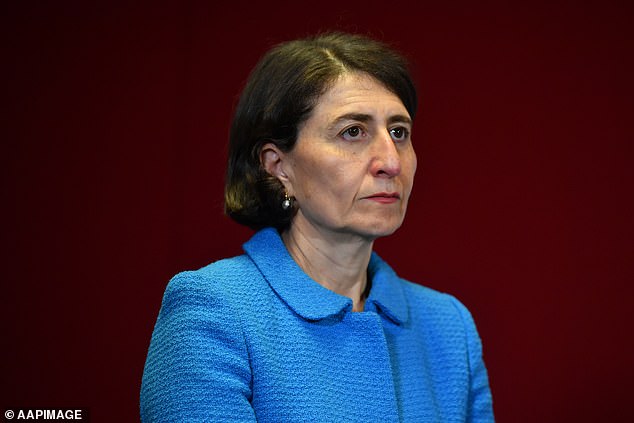 ‘In relation to mask-wearing, mask-wearing at indoor places will be compulsory for the next three days,’ Ms Berejiklian said.

‘Public transport, if you go to the supermarket, any indoor event, will require compulsory mask wearing in addition to hospitality workers.

‘You can go and have a meal. You can enjoy a hospitality venue, but the workers will be expected to wear a mask for the next three days.’

Despite the new rules, Ms Berejiklian was adamant it was ‘business as usual’ for the next three days in Greater Sydney. 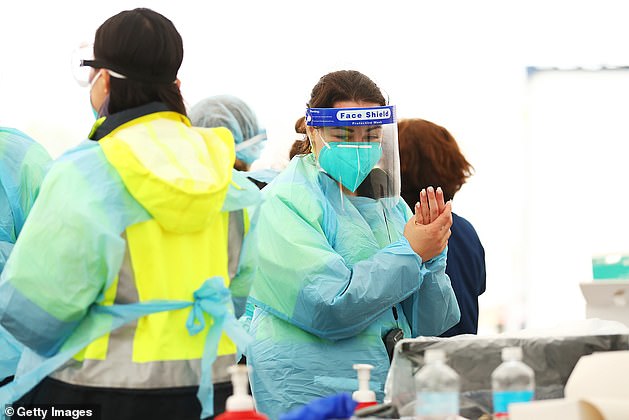 ‘But we are asking people just to take extra precautions if you have a looking for Mother’s Day, go to the booking, go to the restaurant if you have a family gathering at home, that’s great, but just limit it to 20 people,’ she said.

The premier said it is a ‘a very measured proportionate response’ to the risk.

More than 42,000 people in the inner west are also on high alert after virus fragments were found in wastewater from a sewage plant.

NSW Health urged everyone in those areas to be especially vigilant in monitoring for symptoms, and if they appeared, to get tested and isolate immediately until a negative result is received.

Anyone who attended one of the following venues at the times specified is asked to immediately get tested and isolate until NSW Health provides further information.