One of the most important factors to consider when buying any car is how much it could be worth once you’re done with it.

With finance – notably PCP (Personal Contract Purchase) – now the most common way for drivers to get their hands on new vehicles, the future value of a motor also determines how affordable a motorist’s monthly payments are.

Choosing a model that depreciates quickly will see cash buyers getting less of their money back at the time of sale and higher monthly outgoings for those who finance their vehicles.

With car showrooms reopening last month, new data has revealed which are the 10 new motors that keep the highest percentage of their value – and the 10 that shed it at an alarming rate. 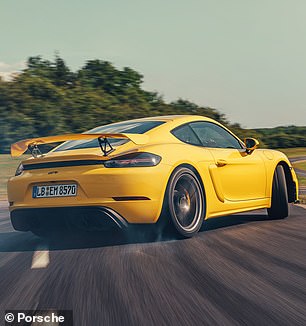 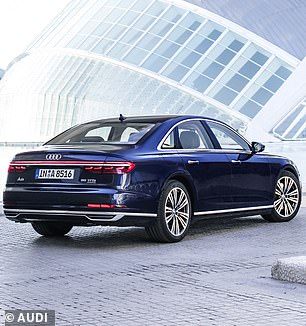 Differences in depreciation: One of these cars keeps 72% of its original value after three years of ownership while the other retains just 27% of its new price

Britain’s best and worst cars for depreciation have been revealed by What Car? in collaboration with valuations experts CAP HPI.

The figures are based on an estimated trade-in valuations for new cars after three-years of ownership and the first owner putting 36,000 miles on the clock in that time.

The research comes after the Society of Motor Manufacturers and Traders published its latest new car registration figures, which revealed that 141,583 new cars were registered in April.

These promising stats suggest there is a high level of demand for 21-plate vehicles since showrooms were allowed to reopen from lockdown on 12 April, which could help the sector recover from a dismal 2020.

To help motorists make a decision when they step foot into a dealership, What Car? and CAP HPI has highlighted which models are likely to lose pounds quicker than a pair of jeans with holes in the pockets.

The car with the unwanted record of losing value hand over fist faster than any other mainstream model is one that’s steeped in luxury.

At the bottom of the list is the £106,305 Audi A8 55 TFSI quattro Vorsprung – the fastest depreciating model in the findings – with a retained value of just 27.3 per cent.

That means it will shed around £77,000 of its new price in just three years of ownership.

And the cars that join it in the list of rapid depreciating new motors suffer a similar level of lost value.

All of the fastest depreciating vehicles listed by CAP HPI retain around a third or less of their value after three years of driving. 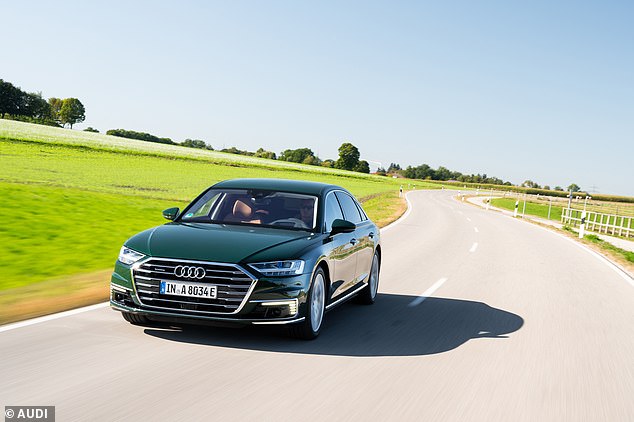 The model that jumps out most in the value-losing motor standings is the Vauxhall Astra.

The family hatchback has been one of the biggest selling cars in Britain for years, but in recent times has fallen down the pecking order.

With its closest rival, the Ford Focus, seemingly more appealing to buyers and the likes of the more premium VW Golf and Mercedes-Benz A-Class growing in popularity, fewer drivers appear to want a second-hand Astra.

Fitted with the 1.5-litre Turbo diesel engine in the sporty SRi specification that costs £23,675 in showrooms, CAP HPI says it will be worth just £7,900 after three years and average mileage.

That’s a 66.6 per cent loss in value – depreciation of two thirds.

What Car? does point out that few drivers will pay the £23,675 asking price in showrooms, with Vauxhall dealers currently offering sizable discounts to shift Astras in an increasingly competitive market. 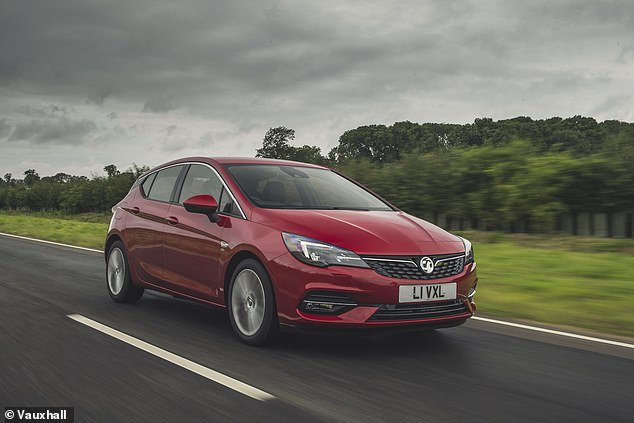 Other ‘affordable’ cars to feature in the list include the Fiat 500 Convertible with the 1.0-litre petrol engine in Pop trim.

It holds just 29.2 per cent of its original value in three years, says CAP HPI. 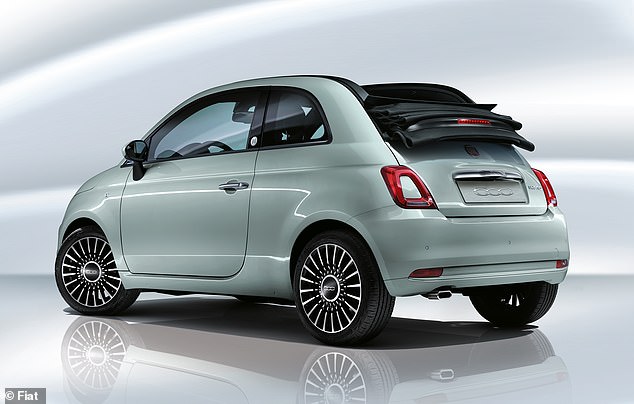 Fiat’s 500 Convertible with the 1.0-litre petrol engine in Pop trim holds just 29.2% of its original value 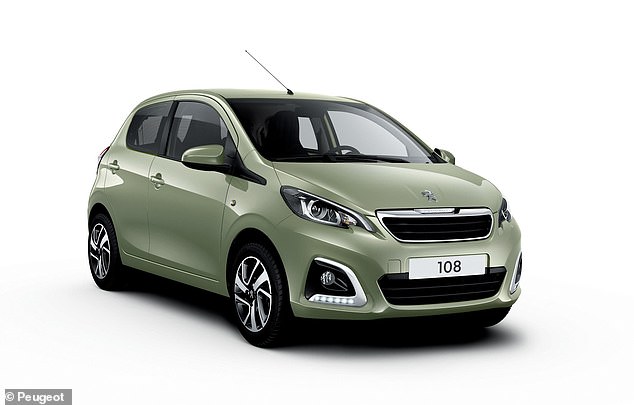 Steve Huntingford, editor of What Car?, said a number of factors influence how a car depreciates, but this latest research shows that ‘badge appeal’ and a high list price are no guarantee of a slow depreciating car.

‘Factors such as what segment it falls into, how well it has sold, the trim and option levels available, and fuel types all influence how well a car holds its value over the years,’ he explained.

‘It’s important buyers do their homework when choosing a next car, especially if they are looking to trade it in or sell it on in a few years.’

Porsche dominated the top 10 standings of cars that hold their value best, with five models among the least depreciating motors in the UK.

The standout performer is the new 718 Cayman 4.0 GT4, named the slowest depreciating car in the UK, with a retained value of 72.4 per cent.

That said, it isn’t cheap in the first place.

Porsche’s asking price is £78,495 for one, which is a steep charge for a compact sports car that sits below the iconic 911 in the range.

However, with a naturally-aspirated engine (instead of turbocharged like the other Cayman models) and a six-speed manual gearbox (instead of an automatic), it’s considered a purist’s dream that’s in huge demand, which is why it holds value so well. 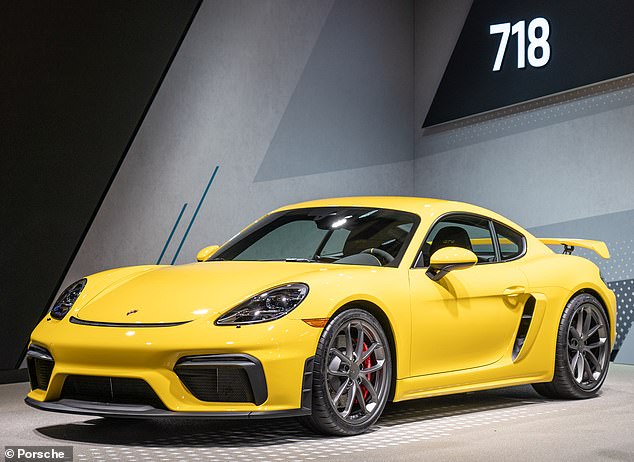 The top 10 for the slowest depreciating cars also included a plug-in hybrid and two fully electric models, with the Porsche Cayenne E-Hybrid, Tesla Model 3 and Porsche Taycan found to retain 57.6 per cent, 58.2 per cent and 60.9 per cent of their values after three years, respectively.

None of these are cheap to buy either.

Drivers wanting to get their hands on Porsche’s Cayenne hybrid SUV are expected to fork out £71,110, while the Tesla Model 3 variant in the list – the Long Range – is priced from £49,990 in the UK.

The Porsche Taycan is the most expensive of the three, with the 4S version starting from £83,635. 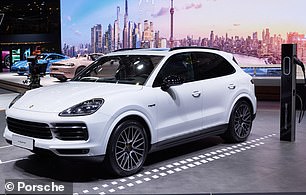 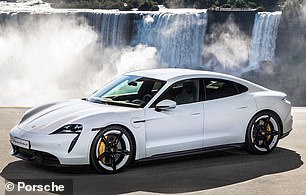 Left: The Porsche Cayenne E-Hybrid holds 57.6% of its value after 3 years. Right: The fully-electric Porsche Taycan holds 61% of its value 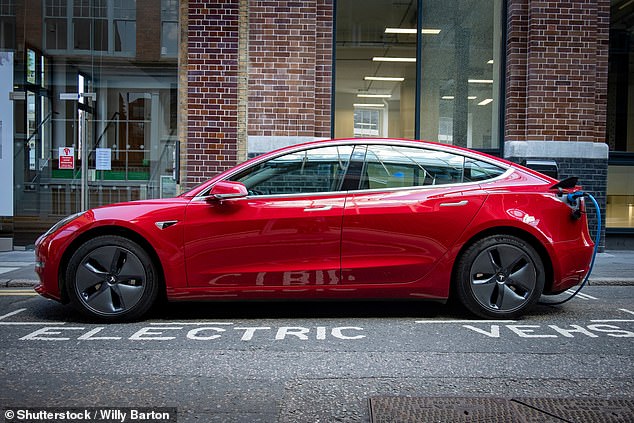 In fact, this is the theme for all the models in the slowest deprecating list, with the lowest price of any of the top 10 being a staggering £42,400 for the Range Rover Evoque P250 R-Dynamic S. The compact SUV retains 59.3 per cent of its value after three years of ownership and average annual use of 12,000 miles.

The most expensive of all is the slowest depreciating list is the Lamborghini Urus, which is priced from £174,711.

The Italian supercar brand’s SUV holds an estimated 63 per cent of its original value. That means the likelihood is that it will be worth around £110,068 after three years of driving.

All of the top 10 models retained more than half of their value after 36,000 miles of use.