The NCAA women’s basketball tournament in San Antonio finally has a real weight room after players and coaches publicly shamed the governing body on social media for the disparities between their facilities and the ones being used by men’s teams in Indianapolis.

‘Guess what guys,’ Oregon star Sedona Price exclaimed in a social media video showing the new equipment. ‘We got a weight room! We got a ton more dumb bells. Look at all these racks for squats, whatever you want to do.

‘Thank you NCAA for listening to us,’ added Price, who helped raise the issue on Twitter last week.

Both the men’s 68-team field in Indianapolis and the women’s 64-team field in San Antonio are conducting their respective tournaments in a single location due to pandemic restrictions.

The men had a fully stocked weight room before the start of their tournament, whereas the women had a single stack of hand weights. Women’s players also criticized the NCAA for what they saw as inferior swag bags and dining options compared to what their male counterparts were enjoying in Indianapolis.

NCAA basketball administrators apologized to the women’s basketball players on Friday for the inequities.

SCROLL DOWN FOR VIDEO 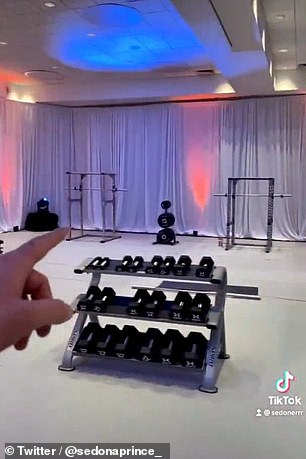 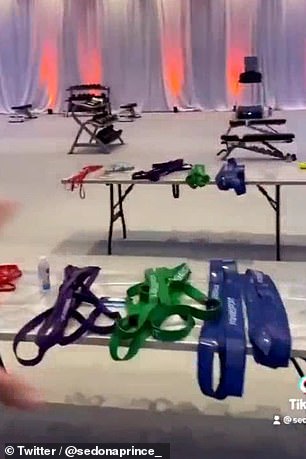 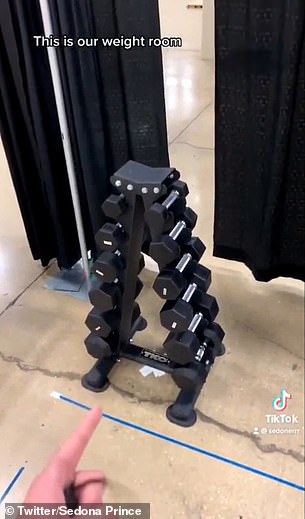 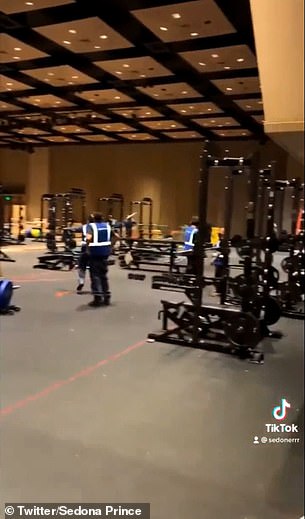 Oregon star Sedona Prince showed off the women’s weight room (left) and compared it to the men’s (right), saying: ‘If you aren’t upset about this problem, then you are a part of it’ 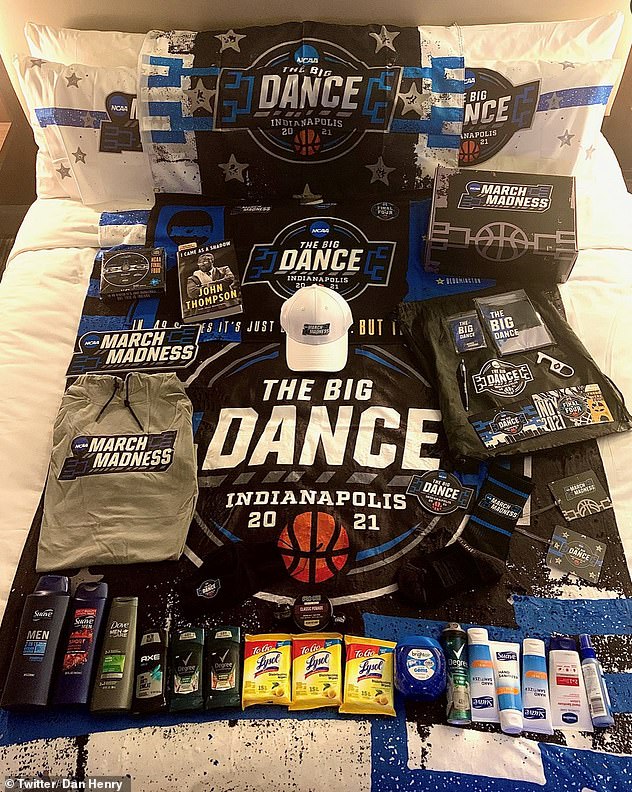 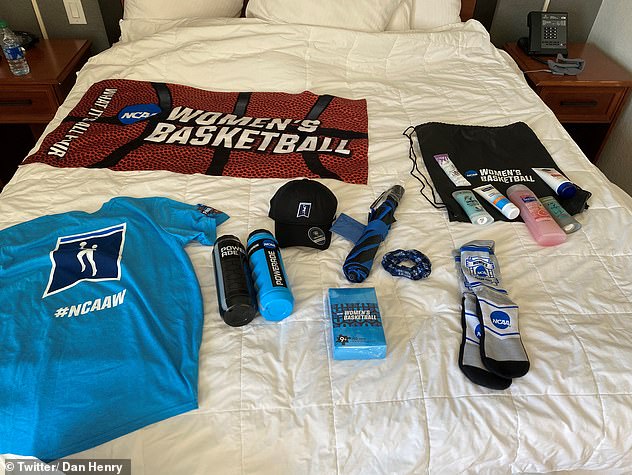 Several women’s players were quick to point out that their swag bag was significantly smaller than the men’s.  ‘The men have everything in that weight room and we have yoga mats,’ South Carolina star Aliyah Boston said. ‘What are we supposed to do that. The bags, I’m glad we got a body wash, but they got a whole store’

Despite the improvements to the original weight room, many coaches were still furious with the NCAA over what Stanford’s Tara VanDerveer called ‘blatant sexism.’

‘A lot of what we’ve seen this week is evidence of blatant sexism,’ the 67-year-old Van Derveer said in a statement. ‘This is purposeful and hurtful. I feel betrayed by the NCAA. I call on University Presidents and Conference Commissioners to demand accountability. Who made these decisions and why?

‘Women athletes and coaches are done waiting, not just for upgrades of a weight room, but for equity in every facet of life.’

Prior to picking up her 500th career win on Sunday, South Carolina women’s basketball coach Dawn Staley took aim at the NCAA and president Mark Emmert over the issues, which she said is bigger than any one weight room.

‘There is no answer that the NCAA executive leadership led by Mark Emmert can give to explain the disparities,’ Staley posted to Twitter on Friday night. ‘Mark Emmert and his team point blank chose to create them! The real issue is not the weights or the “swag” bags. It’s that they did not think or do not think that the women’s players “deserve” the same amenities of the men.’

The NCAA also took criticism for a tweet picturing the new weight room in San Antonio because it did not include any apology to the players.

‘We apologize for our insensitive, sexist conscious decision to disrespect the women of the NCAA and while the only reason we corrected it was because we were put on blast, we still want you to believe that we are indeed proponents of gender equality,’ he wrote. ‘There I fixed it for you.’

Teams can now sign up for 45-minute blocks of time to workout in the new weight room. There are heavier weights as well as squat racks, benches and exercises balls. The NCAA brought in a few of the teams strength and conditioning coaches to ensure that the new area was up to their standards.

Several teams took advantage of the facility on Saturday, including Louisville.

‘It was great. It’s nice. Everything that we needed,’ Louisville coach Jeff Walz said. ‘Our strength coach was pleased, our players were pleased. We appreciate the efforts.’ 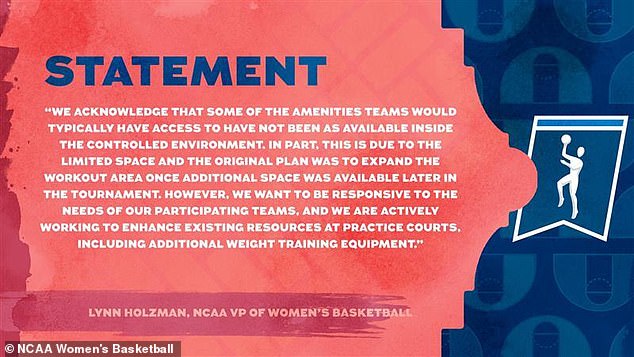 The NCAA had originally told women’s teams in a manual that there wouldn’t be a weight room facility until after the second round when only 16 teams would remain. They changed that plan after a tweet from Stanford strength coach Ali Kershner and a video from Prince went viral with nearly 16 million views showing off a single rack of dumbbells and yoga mats.

That set off a backlash condemning the inequities between the men’s and women’s tournaments that drew the attention of NBA and WNBA players as well as former coaches.

The NCAA said that the workout items shown in Prince’s video were never intended to be the weight room, but just some equipment for teams to use while they waited to get onto the practice court as it was being sanitized.

NCAA vice president Lynn Holzman initially said that the issue in San Antonio had to do with limited space and more areas would be opening up as teams were eliminated over the course of the tournament.

‘We acknowledge that some of the amenities teams would typically have access to have not been as available inside the controlled environment,’ Holzman told the Washington Post in a statement. ‘In part, this is due to the limited space and the original plan was to expand the workout area once additional space was available later in the tournament.

‘However, we want to be responsive to the needs of our participating teams, and we are actively working to enhance existing resources at practice courts, including additional weight training equipment.’

That excuse did not fly with several top players, including Prince.

‘I got something to show y’all,’ Prince said in a social media video.

‘So, for the NCAA March Madness, the biggest tournament in college basketball for women, this is our weight room,’ she continued, pointing her camera at a single stack of free weights.

The clip then moves to footage of the men’s weight room in Indianapolis, showing modern weight machines evenly spaced across a large indoor area.

‘Lemme show y’all the men’s weight room,’ she continued. ‘Now when pictures of our weight room got released vs. the men’s, the NCAA came out with a statement saying that it wasn’t money, it was space that was the problem.’

Finally, Prince showed the women’s practice court, which included enough empty space for an array of exercise equipment that would have been comparable to the men’s weights in Indianapolis.

‘If you aren’t upset about this problem, then you are a part of it,’ she concluded. 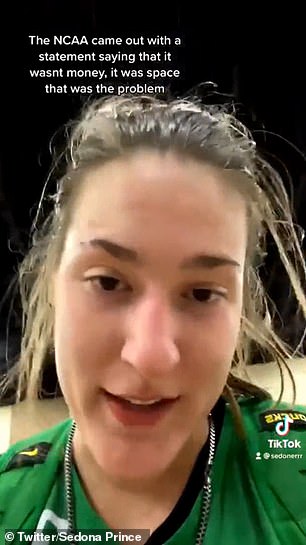 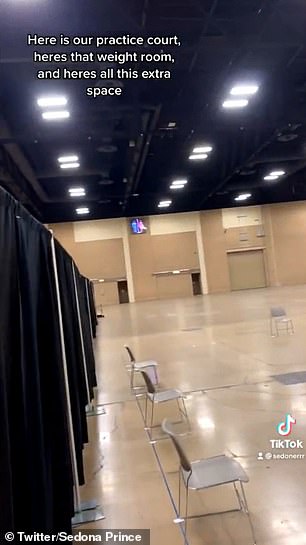 The NCAA’s excuse did not fly with several top players, including Oregon star Sedona Prince (left). ‘Now when pictures of our weight room got released vs. the men’s, the NCAA came out with a statement saying that it wasn’t money, it was space that was the problem,’ said Prince. She then showed the women’s practice court (right), which included enough empty space for an array of exercise equipment that would have been comparable to the men’s weights in Indy

Prince was hardly the only one pointing out the disparities between the men’s and women’s facilities in Indianapolis and San Antonio.

In a Twitter post, Stanford sports performance coach for women’s basketball Ali Kershner posted a photo of a single stack of weights next to a training table with sanitized yoga mats, comparing it to pictures of massive facilities for the men with stacks of free weights, dumbbells and squat racks.

‘These women want and deserve to be given the same opportunities,’ Kershner tweeted. ‘In a year defined by a fight for equality, this is a chance to have a conversation and get better.’

Several of the top women’s basketball players see it as a bigger issue than just a subpar weight room.

‘We are all grateful to be here and it took a lot of effort for them to put this all together,’ UConn freshman All-American Paige Bueckers said on an AP Twitter chat Thursday night. 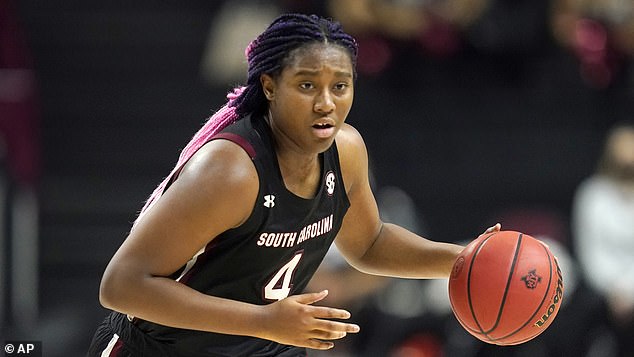 ‘The men have everything in that weight room and we have yoga mats,’ she said. ‘What are we supposed to do that. The bags, I’m glad we got a body wash, but they got a whole store.’

The current players got a lot of support from several top former college and current WNBA players who quickly tweeted support for the women and criticism of the NCAA.

‘That NCAA bubble weight room situation is beyond disrespectful,’ tweeted A’ja Wilson, who led South Carolina to the 2017 national championship and now plays for the Las Vegas Aces in the WNBA. 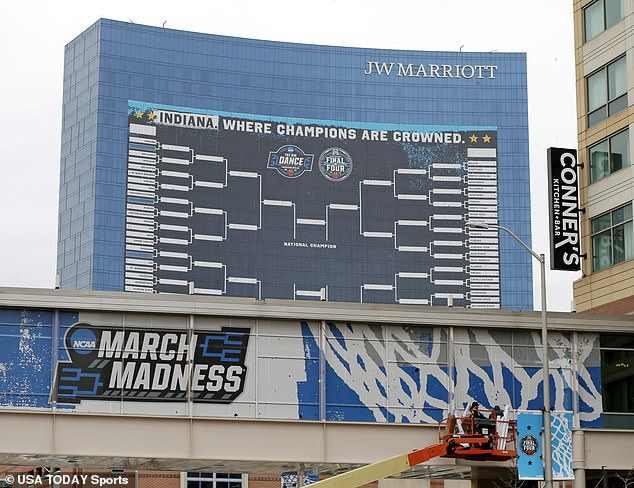 Indianapolis, Indiana; A giant banner showing the tournament bracket hangs from the J.W. Marriott hotel as Indianapolis prepares to host the 2021 NCAA Division I Basketball Tournament on Wednesday. Indianapolis is hosting the entire tournament this year from the First Four to the National Championship game due to the coronavirus pandemic