Mother, 32, avoids making eye contact with men because she suffers from rare brain disorder cataplexy that means she COLLAPSES any time she sees someone she finds attractive

By Katie Weston For Mailonline

A mother avoids making eye contact with men because she suffers from a rare brain disorder that means she collapses any time she sees someone she finds attractive.

Kirsty Brown, 32, from Northwich, Cheshire, has been diagnosed with cataplexy – a sudden muscle paralysis which can be triggered by any strong emotion such as anger, laughter and fear.

The condition is most commonly associated with narcolepsy, a sleep disorder, and attacks usually last less than two minutes.

The mother-of-two is forced to keep her head down in public to avoid hurting herself when her knees buckle.

Kirsty said: ‘It’s so embarrassing. I was out shopping once and I saw someone that looked alright, and my legs just went and I had to cling onto my cousin for support. 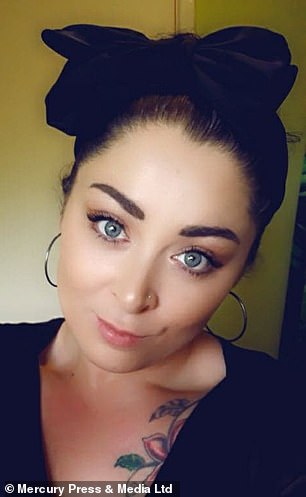 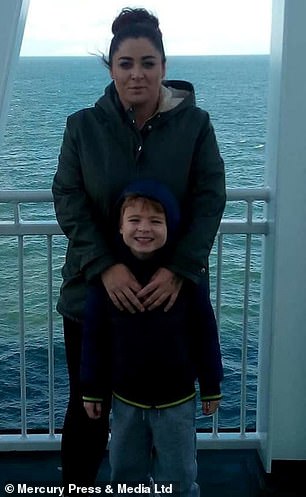 Kirsty Brown (pictured left and right, with her son Joey), 32, from Northwich, Cheshire, suffers from cataplexy – a sudden muscle paralysis which can be triggered by any strong emotion

‘If I see someone attractive, my legs just go so I try not to put myself in situations where that could happen, or I try to keep my eyes down for my own safety.’

On average, Kirsty has five cataplexy attacks per day but can have up to 50 on a bad day, making it difficult to leave the house.

She said: ‘Considering it’s a sleep disorder, we don’t sleep much and when we do it isn’t a deep sleep so if I’m really tired, I have more attacks than usual.

‘I can have an attack at the top of a flight of stairs if they’re steep because I don’t like heights. I’m trying to move to a new house that doesn’t have stairs or where I can have a stairlift. 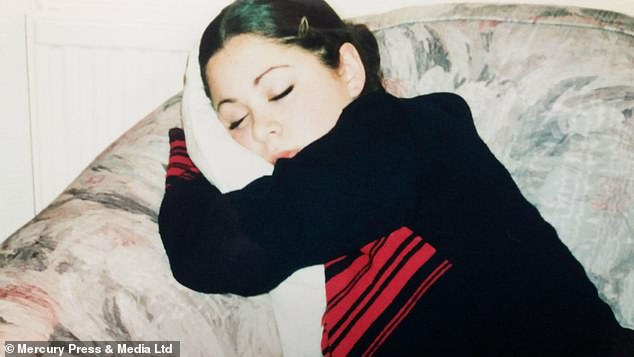 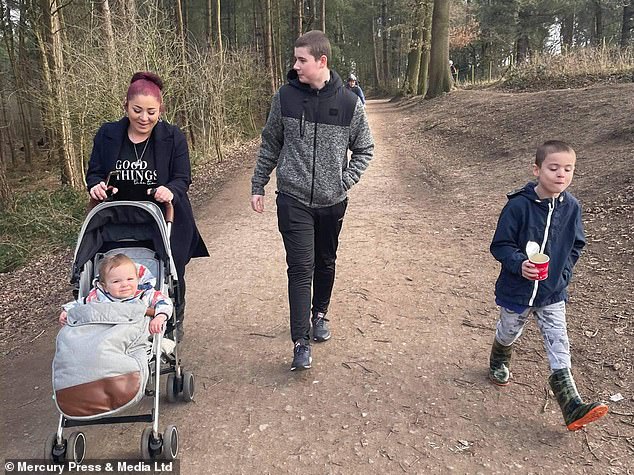 The mother with her nephew, Harry, and sons Ryan and Joey. Kirsty was born with the narcolepsy gene, but it was brought on early by a head injury when she was aged nine

Cataplexy is a sudden muscle paralysis that can be triggered by any strong emotion such as anger, laughter and fear.

It can range from a barely noticeable weakening of the facial muscles to weakness of the knees and collapsing.

The condition is most commonly associated with narcolepsy, a sleep disorder, and attacks usually last less than two minutes but can only go on for a few seconds.

Those suffering from the condition stay fully conscious throughout both mild and severe attacks.

Around 75 per cent of people with narcolepsy, a rare neurological condition, are thought to have suffered from cataplexy.

‘Anger and laughter trigger it and me and my sisters are either arguing or making each other laugh because they’re the funniest people I know.

‘I think they know what they’re doing sometimes, if they know I won’t hurt myself then they’ll make me laugh.

‘Even if I just find myself funny, I can have an attack. It’s any strong emotion or loud noises like beeping cars or shouting.

‘I haven’t had an attraction that strong recently that it would trigger an attack which on one hand is brilliant but also a bit sad because I’d like to feel that attracted to someone.

‘There’s been times when I’ve been arguing, and I’ve collapsed which does put an end to the argument. I’m due to have physio on my back because I hurt it when I had an attack.’

Kirsty was born with the narcolepsy gene, but it was brought on early by a head injury when she was aged nine.

She said: ‘Me and some friends were throwing stones into a tree to get conkers and one hit me on the head.

‘I would have suffered with cataplexy eventually because of the gene anyway.

‘It has been a struggle because I brought my kids up on my own and it’s hard to find a job when you need to explain that you could collapse at any point.

‘When I have an attack I don’t feel anything go through my body, it’s like a short circuit from the brain to the muscle is interrupted and I just lose control over my legs, but the top half of my body does feel strong.’