More than 100 protesters took to the streets of Columbus, Ohio, Wednesday night to demonstrate against the police shooting of Ma’Khia Bryant.

Bryant, a 16-year-old black teenager, was shot dead by a white police officer after she charged at two people with a knife.

The demonstrators were seen peacefully protesting down a street in Columbus holding signs that read ‘Black Lives Matter’ and ‘Power to the People’.

Protests and a vigil also occurred earlier on Wednesday with groups gathering to march and pray for the Bryant family.

Police bodycam footage on Tuesday showed a chaotic scene that happened within minutes of the verdict in George Floyd’s killing and ignited outrage by many over the continued use of lethal force by police in Columbus and the US. 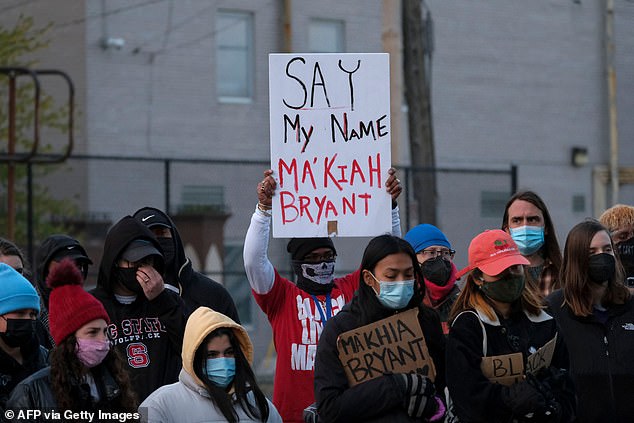 More than 100 protesters took to the streets of Columbus, Ohio, Wednesday night to demonstrate against the police shooting of Ma’Khia Bryant. Demonstrators are seen Wednesday evening 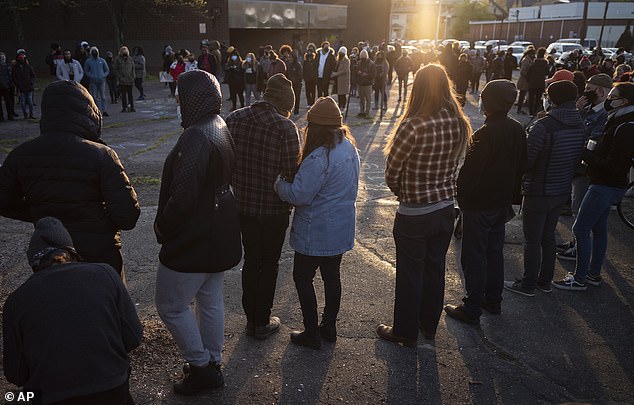 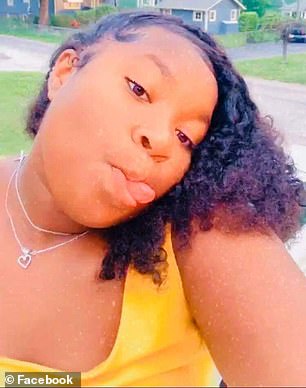 Officials with the Columbus Division of Police had released initial footage of the shooting Tuesday night just hours after it happened, which was a departure from protocol as the force faces immense scrutiny from the public following a series of recent high-profile police killings that have led to clashes.

Bryant was in foster care with Franklin County Children’s Services at the time of her death. Her grandmother, Debra Wilcox, described her as a shy and quiet girl, who liked making hair and dance videos on TikTok.

‘The fact that I see what I saw on that video is not how I know my Ma’Khia,’ Wilcox told The Associated Press on Wednesday. ‘I don’t know what happened there unless she was fearful for her life.’

The incident has caused an outcry in the community and nationwide as Bryant’s killing is the second high-profile fatal shooting of a teenager by police in the last month.

‘Her family is grieving. Regardless of the circumstances associated with this, a 16-year-old lost her life yesterday.’

He added: ‘I sure as hell wish it wouldn’t have happened.’

‘She was a child. We’re thinking of her friends and family and the communities that are hurting and grieving her loss,’ Psaki said in a statement.

The 10-second body camera clip begins with the officer, identified Wednesday as Nicholas Reardon, getting out of his car at a house where police had been dispatched after someone had called 911 saying they were being physically threatened, Woods said. It remains unclear who called the police.

The officer, who was hired by the force in December 2019, is seen taking a few steps toward a group of people in the driveway when Bryant starts swinging a knife wildly at another girl or woman, who falls backward. The officer shouts several times to get down.

Bryant then charges at another girl or woman, who is pinned against a car.

From a few feet away, with people on either side of him, the officer fires four shots, and Bryant slumps to the ground. A black-handled blade similar to a kitchen knife or steak knife lies on the sidewalk next to her.

A man immediately yells at the officer, ‘You didn’t have to shoot her! She’s just a kid, man!’

The officer responds: ‘She had a knife. She just went at her.’

The race of the officer wasn’t clear and he was taken off patrolling the streets for the time being. 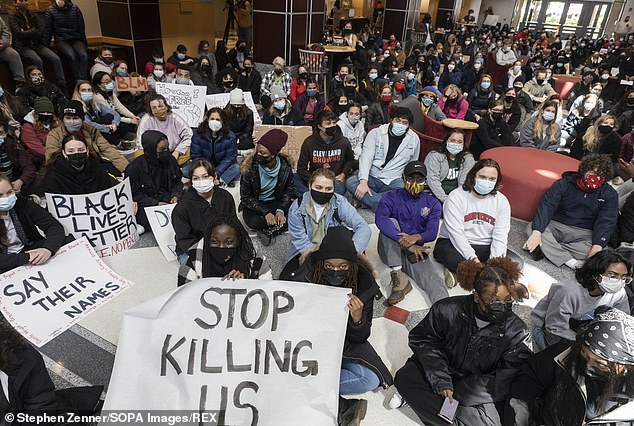 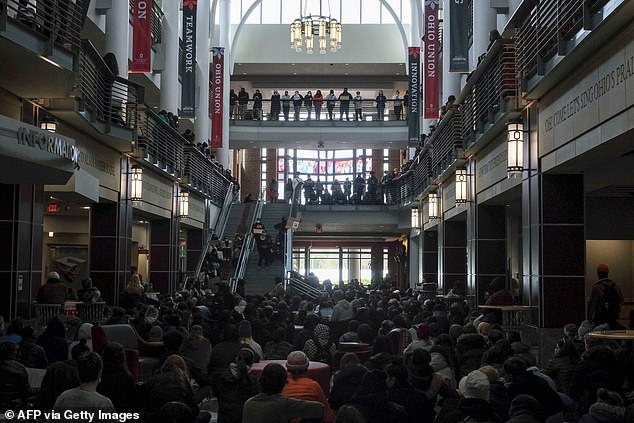 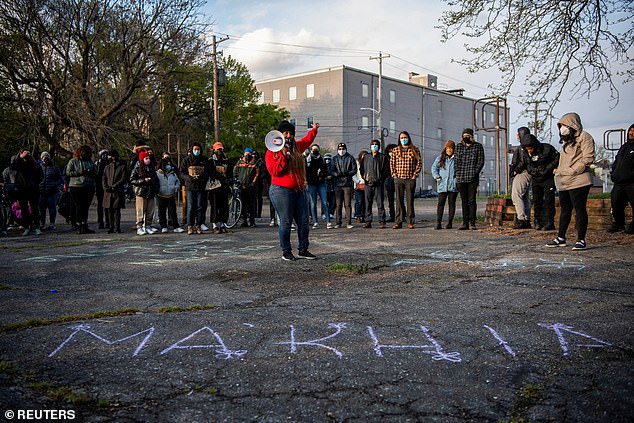 People attend a vigil for 16-year-old Ma’Khia Bryant, who was shot and killed by a Columbus Police officer on Tuesday, in Columbus

Bryant was taken to a hospital, where she was pronounced dead, police said. Police did not say if anyone else was injured.

In the moments after the shooting, people living or visiting the street filmed as police roped off the area with yellow tape in front of the house where the shooting took place.

A neighbor’s video shows an officer performing CPR on the teenager while a man can be heard yelling: ‘You all just jumped out of the (expletive) car and shot her!’

Woods said state law allows police to use deadly force to protect themselves or others, and investigators will determine whether this shooting was such an instance.

Ohio’s Bureau of Criminal Investigation is now reviewing the killing following a recent agreement with the city.

The shooting happened about 25 minutes before a judge read the verdict convicting former Minneapolis Police Officer Derek Chauvin of murder and manslaughter in the killing of Floyd.

It also took place less than 5 miles from where the funeral for Andre Hill, who was killed by another Columbus police officer in December, was held earlier this year.

The officer in Hill’s case, Adam Coy, a 19-year veteran of the force, is now facing trial for murder, with the next hearing scheduled for April 28.

Last week, Columbus police shot and killed a man who was in a hospital emergency room with a gun on him. Officials are continuing an investigation into that shooting.

Ohio Gov Mike DeWine said Wednesday that he watched the footage of Bryant’s killing and called it a ‘horrible tragedy’.

He added that while the public has the video evidence, ‘we need to let the investigation play out.’

The effort was initially introduced in another form with Attorney General Yost in the days after Floyd’s killing last summer.

The new bill, to be introduced by GOP State Rep Phil Plummer, of Dayton, would, among other things, establish an oversight board for law enforcement in the state. DeWine said the goal of the legislation is to increase transparency in the profession.