More than 100 Royal Air Force planes and helicopters are to be scrapped as part of a defence revolution which will see most manned aircraft replaced by drones.

The cuts are part of a defence review which also confirmed the Army will shrink by 10,000 to 72,500 troops – its smallest size since 1714 – while the Royal Navy will be reduced, if only temporarily, to just 17 frigates and destroyers. 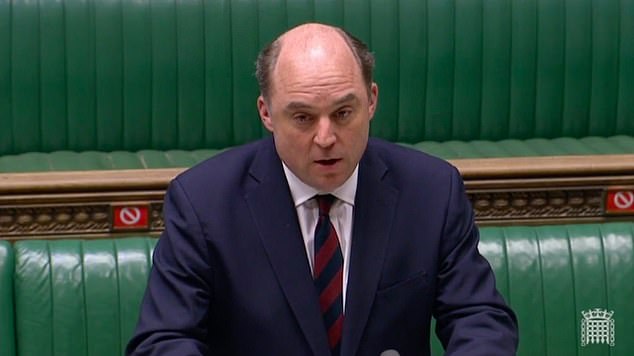 Defence Secretary Ben Wallace wants the UK to have the most integrated, digital and agile forces in the world, projecting British influence on the world stage 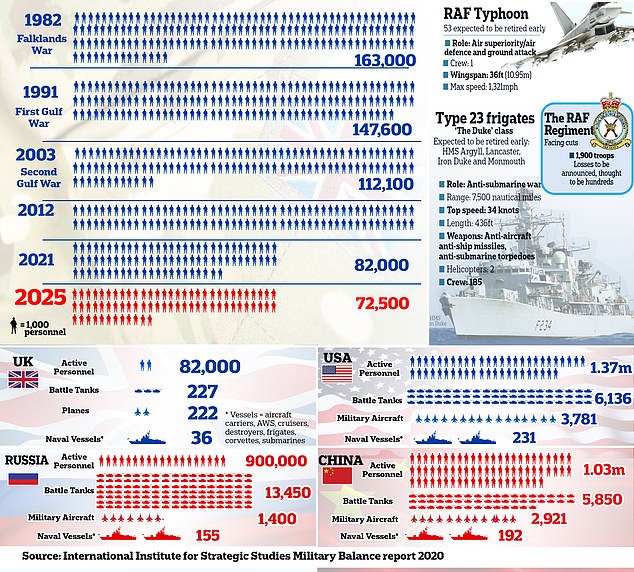 While these cutbacks will almost certainly reduce capability, RAF commanders are adamant a new generation of aircraft, crewed and un-crewed, will strengthen the service in the years ahead

The review has garnered severe criticism in some quarters, with one former British commander saying the US military would be ‘horrified’ by the cuts.

One infantry battalion is being axed in the overhaul, with five more given new roles. The 2nd Battalion the Mercian Regiment will be removed from the Army’s Order of Battle. Four infantry battalions, which currently specialise in training troops overseas, will eventually merge to form the Army’s new Ranger Regiment.

While one of Yorkshire Regiment’s two full-time infantry battalions will be given a new role as the Army’s ‘experimental unit’, testing the latest equipment and fighting techniques. The RAF will axe all 14 of its C-130J ‘Super Hercules’ transporters favoured by the SAS, 24 Typhoon jets and its four BAE-146 ‘Royal Flight’ aircraft.

While these cutbacks will almost certainly reduce capability, RAF commanders are adamant a new generation of aircraft, crewed and un-crewed, will strengthen the service in the years ahead.

They also anticipate that by 2040, piloted planes and helicopters will account for just one in five RAF aircraft with semi-autonomous drones due to enter service, many of them bristling with hi-tech weaponry.

The reduction in manned aircraft has raised concerns among aviation experts, including Douglas Barrie, of the International Institute for Strategic Studies, who said: ‘Quantity retains a quality all of its own and the loss of the C-130J and its Special Forces tasking capability will be missed.

‘While depending on timings, the withdrawal of the Sentry – if before the Wedgetail [early-warning aircraft] enters service – would leave a notable capability gap.’

Under the review, there will be £6.6billion of investment for research, development and experimentation, at least 48 F-35 fighter jets to be stationed on the UK’s aircraft carriers and £2billion in funding for the RAF’s next generation of fighter jet Tempest. The number of Royal Navy warships will also increase to more than 20 by the next decade.

And the RAF will be running a Space Command which will develop a strategy to protect British satellite infrastructure.

But cuts to the Armed Forces are likely to cause alarm among US military planners, according to Colonel Richard Kemp, a former British military commander in Afghanistan. He said: ‘In the defence review the Government says that its most important ally is the United States.

‘Well I know that the US senior military officers will be horrified at the idea of further cuts to our Armed Forces because British forces are pretty much the only Armed Forces around the world who the Americans can rely on. I think they already believe we are too small in size and the idea that we are going to get smaller will mean that they question whether we are any longer a properly effective and reliable ally.’

Defence Secretary Ben Wallace wants the UK to have the most integrated, digital and agile forces in the world, projecting British influence on the world stage.

Yesterday Mr Wallace said: ‘Increased funding offers defence an exciting opportunity to turn current forces into credible ones, modernising to the threats of the 2020s and beyond and contributing to national prosperity in the process. It marks a shift from mass mobilisation to information-age speed, readiness and relevance for confronting the threats of the future. These principles will guide our doctrine and force development.’

But the plan was immediately attacked by members of the Commons defence Committee. Its chairman Tobias Ellwood said: ‘There is much to welcome on the paper, including investments in autonomous platforms.

‘But it comes at a dramatic cost to our conventional defence posture including troop numbers and over 100 RAF aircraft, including fighter jets and heavy lift aircraft, which if tested by a parliamentary vote I do not think would pass.’