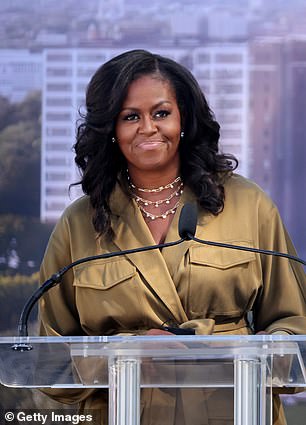 Despite her past insistence against running for the White House, Michelle Obama is a ‘completely plausible’ 2024 candidate, a former Trump aide said

A former Trump administration official this weekend floated the possibility of Michelle Obama succeeding President Joe Biden as the 2024 Democratic nominee, warning that the former first lady would be a formidable opponent to the GOP.

‘If [Democrats] were to run Michelle Obama, that would put us in a very difficult position,’ former Trump aide Monica Crowley said at the Conservative Political Action Conference in Orlando on Saturday.

‘They’d reach for a candidate who is completely plausible, very popular, and immune to criticism.’

Crowley, who was Assistant Secretary of the Treasury for Public Affairs under Donald Trump, appeared at a panel discussion alongside former White House physician-turned-House Rep. Ronny Jackson, conservative activist Jack Posobiec and California lawyer Kurt Schlichter during the multi-day event.

After tossing the popular Democratic first lady’s hat in the ring, Crowley explained how Obama would have been positioning herself to mount a White House bid in the years after her husband Barack Obama left the White House in early 2017.

‘When you think about her positioning, she spoke as a [Democratic National Convention] keynote speaker in 2020,’ Crowley claimed.

‘She wrote her autobiography and did a 50-city tour, she has massive Netflix and Spotify deals, and she’s got a voting rights group alongside Stacey Abrams.’

It’s a testament to the Harvard-educated lawyer’s popularity, particularly among Democrats. 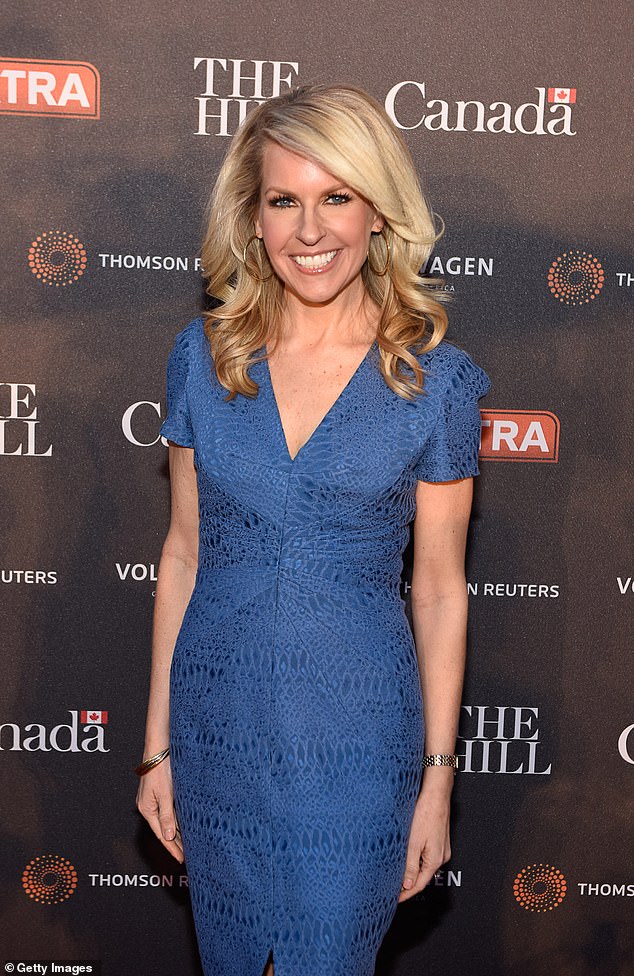 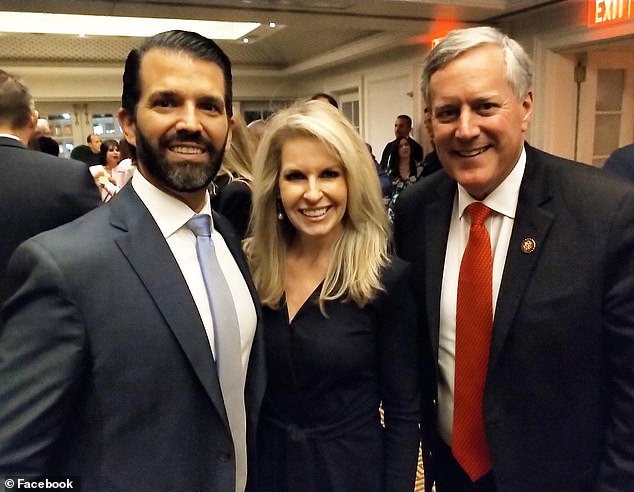 She previously served as Assistant Secretary of the Treasury for Public Affairs under Donald Trump (pictured with Donald Trump Jr. (left) and former Trump Chief of Staff Mark Meadows (right)

She was voted as the top most admired woman in YouGov’s global survey three years in a row, most recently winning the number one spot in December 2021.

And while Obama has publicly dismissed the idea of running for her husband’s old job, a recent Hill-HarrisX poll placed her high on the list of potential candidates in 2024 should Biden choose not to run.

The president, who’s so far said he’s running for re-election, would be 81 years old at the start of his second term.

But on Saturday, former Trump aide Crowley highlighted Harris’ gaffe-laden first year. She suggested Obama would be a good alternative so as not to alienate black women, among the Democratic Party’s most loyal voters, according to Business Insider.

Obama has long been admired by Democrats and even Independents, and would have immediate name recognition should she cast a 2024 bid.

Despite her insistence that she won’t run, Crowley warned her crowd at the Republican event to be ready for it and compared Obama’s profile-enhancing activism that put her back into the public eye after leaving the White House to the actions of Hillary Clinton — another rumored potential 2024 candidate.

‘For all of these people who say, “Michelle Obama isn’t political, they’re making too much money now,” keep a very close eye on her because her trajectory is exactly what Barack Obama did before he ran for president and what Bill and Hillary Clinton both did,’ Crowley said.

She reasserted:  ‘I think if she were to run, that would be a very difficult situation for us.’

Obama famously said during a leadership conference in Boston in 2018 that to run for president, ‘my sense is that, first of all, you have to want the job.’

But despite her claimed distaste for running for office, Obama has waded into the political arena several times — to a warm reception.

Obama was seen as a key asset for her husband’s successful 2008 and 2012 presidential campaigns, including a highly praised speech at the 2008 Democratic National Convention.

She also delivered an impassioned speech endorsing Biden in 2020, claiming he was the only one who could ‘put an end to this chaos’ of the Trump administration.

Most recently, Obama waded into November’s midterm elections, throwing her weighty influence and her group When We All Vote behind an effort to register 1 million new people for the ballot box this year.

‘She’s great, she’s articulate, she’s intelligent, she’s the wife of the best president that we have had in our lifetime,’ Rogan said. ‘She can win.’

The annual straw poll is seen as a key indicator of who is favored by the party base. 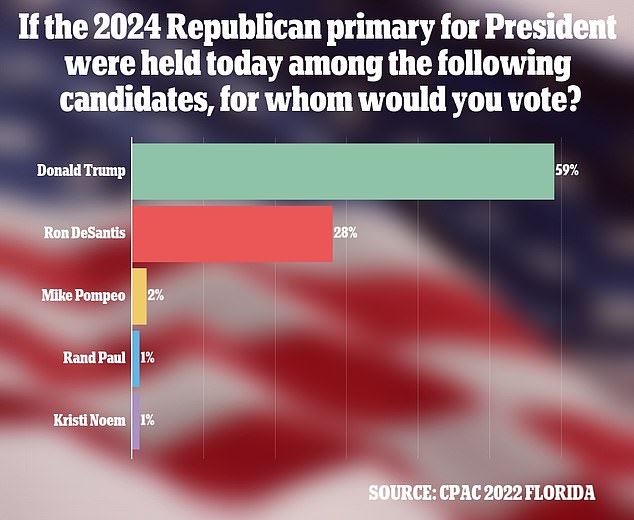 The survey of 2500 attendees found that the most popular candidates occupied the same political territory as Trump – such as allies Mike Pompeo, Rand Paul and Kristi Noem

Trump’s win was no surprise — but he took five percentage points more than last year — with Governor Ron DeSantis, who gave a rousing speech at the gathering on Thursday, in second with 28 percent.

That left the rest of the field as rank outsiders, with former Secretary of State Mike Pompeo taking two percent and Vice President Mike Pence one percent – along side Nikki Haley, Governor of South Dakota Kristi Noem, and Senators Ted Cruz and Rand Paul.

But CPAC’s status as a gathering of hardline conservatives tends to skew the results towards the Trumpist wing of the party.

If Trump were not running, DeSantis takes 61 percent.

And the Republican Party is already cashing in on the chances of Michelle Obama being their opponent.

Two January fundraising emails from the National Republican Senatorial Committee were sent to donors touting the possibility of another Obama in the White House.

‘Left-wing Democrats KNOW they are going to LOSE their Majority in Congress this November, so they want to bring out an OBAMA to save them in 2024,’ one email obtained by Punchbowl News read.

The second stated: ‘Rumors are spreading like wildfire that a certain someone, someone who already spent 8 YEARS in the White House, is thinking of running for PRESIDENT in 2024.’