MERCANTILE INVESTMENT: UK could be entering a purple patch as ‘most exciting market in the year ahead’

Fund manager Guy Anderson is excited about the prospects for the UK economy and the stock market – more so than at any time in the past three years.

Anderson, joint manager of the £2billion Mercantile Investment Trust, believes most consumers are in a healthy financial position as restrictions begin to be lifted – and this will help drive a strong UK recovery.

He says: ‘There is an opportunity for the UK to experience a purple patch of economic growth as consumers start spending again against a backdrop of resilient house prices.’ 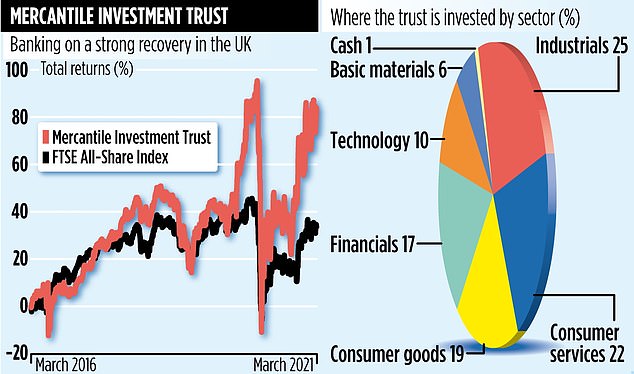 With the UK stock market looking cheap compared to other global equity markets – especially the United States – Anderson says the UK could be ‘the most exciting market in the year ahead’ although he warns that any advance in share prices will be marked by ‘volatility’.

‘It won’t be a straight line increase,’ he adds.

Not surprisingly, Mercantile is set up to benefit from both the anticipated recovery in the UK economy and equity prices.

The trust has used some £250million of borrowings to increase its exposure to UK equities, the latest slice of which (£80million) has been deployed in the last couple of months as the vaccination programme has paved the way for the economy’s re-opening.

In total, the trust now has 82 holdings, compared to 75 at the end of last year.

Existing positions in economically sensitive stocks such as airline Jet2 and steel foundry supplier Vesuvius (previously known as Cookson) have been tickled up as the economic picture has brightened.

Also, new stakes have been taken in RHI Magnesita – another supplier to the steel industry – and copper miner Central Asia Metals.

‘We’re investing in companies that should benefit from an improving economic landscape,’ says Anderson.

He says exposure to the troubled UK steel industry is negligible for both RHI Magnesita and Vesuvius.

Although Anderson is in a positive mood, he admits the past 12 months have been challenging. Last March, every holding was reassessed as the pandemic took grip.

It resulted in stocks being sold, including oil and gas companies Premier Oil and Hunting – and recruitment business Hayes. 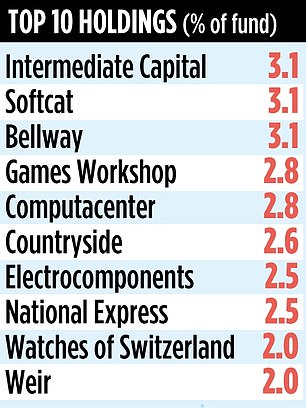 Both these companies have benefited from people spending more time at home, playing more video games and eating in rather than out.

Says Anderson: ‘We could see a tremendous growth runway ahead for Team17. Premier Foods is an established business and has had challenges, but it has paid down debt and is looking to sell more of its produce outside of the UK.’

Over the past five years, the trust has generated a total return for investors of 86 per cent – way in excess of the FTSE-AllShare Index (37 per cent).

Over the past year, the equivalent returns are 25 per cent and 20 per cent respectively.

Next month, the trust’s board will announce the last quarterly dividend payment for the financial year ending January 30. It has already intimated the payment is likely to be 2.55 pence a share.

If so, it will mean a total dividend payment for the year of 6.6 pence – the same as in the previous year.

Some of the dividends paid to shareholders in the last year have come from the trust’s healthy income reserves built up over many years for times such as now when UK dividends have been under extreme pressure.

One big attraction of the trust is its competitive annual charge of 0.44 per cent. One of a number of investment trusts managed by JPMorgan Asset Management, its stock market identification code is BF4JDH5.