Mass vaccination hub that can immunise 30,000 people a week will be set up in Sydney – if the federal government supplies enough jabs

A mass vaccination hub will be set up at Homebush in Sydney’s inner west that can immunise up to 30,000 people a week – if NSW can secure sufficient supplies from the federal government.

Premier Gladys Berejiklian announced on Wednesday plans to vaccinate 60,000 people a week through 100 pre-existing sites as well as at the new hub.

Half of those 60,000 vaccines will be administered at a building to be leased in Homebush.

That number could go up if there is more demand, the premier said.

But she emphasised the plan depended on the Commonwealth supplying the vaccine. 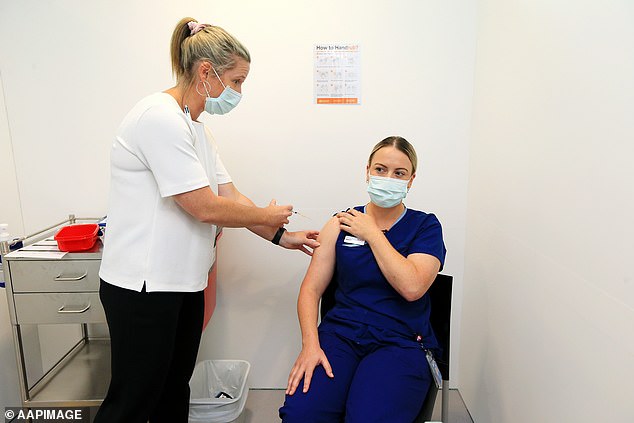 A mass vaccination hub will be set up at Homebush in Sydney’s inner west that can immunise up to 30,000 people a week – if NSW can secure sufficient supplies from the federal government

‘At the end of the day they’re responsible for making sure we have those doses to be able to give out,’ Ms Berejiklian said.

NSW Health Minister Brad Hazzard said the federal government had to overcome some ‘big challenges’ to get the rollout on track.

The NSW government will sign a lease on a commercial facility in Homebush which will open in the next few months.

NSW was originally given responsibility for vaccinating 300,000 residents with the federal government to take care of the rest, primarily through GPs.

But the state has stepped up to take over some of the federal government’s work in light of the bumpy rollout.

Ms Berejiklian said it would be difficult for NSW to take over aged care vaccinations in the state as the federal government had already paid out contracts for the work, but said she was relieved she had pushed to control of vaccinating quarantine workers. 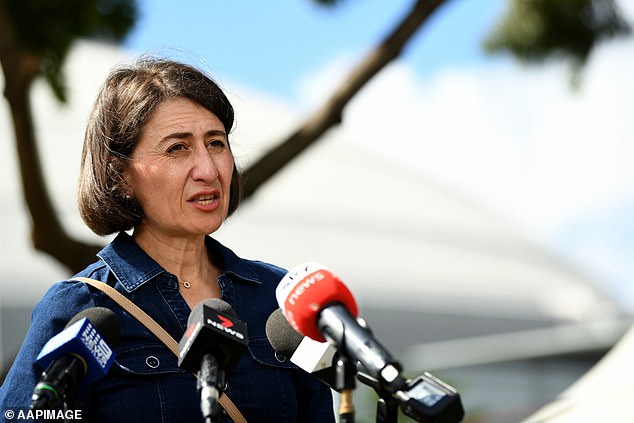 Premier Gladys Berejiklian (pictured) announced on Wednesday plans to vaccinate 60,000 people a week through 100 pre-existing sites as well as at the new hub

Australia has administered about 855,000 doses despite the government promising four million jabs by the end of March.

The premier and Chief Health Officer Kerry Chant reminded NSW businesses and residents of the importance of QR check-in codes.

‘We don’t want to see QR codes hidden at the back of a venue,’ Ms Berejiklian said.

Mr Hazzard said he did not regret cancelling the Bluesfest music festival over Easter despite the fact that transmission in northern NSW has been eliminated.

He said the festival would hopefully return later this year.

NSW recorded six new COVID-19 cases in hotel quarantine in the 24 hours to 8pm on Tuesday. There were zero community cases.