Analysts thought the telecoms giant would have to splash out £820million or even £1billion to buy the additional spectrum, which enables smartphone to download data faster. 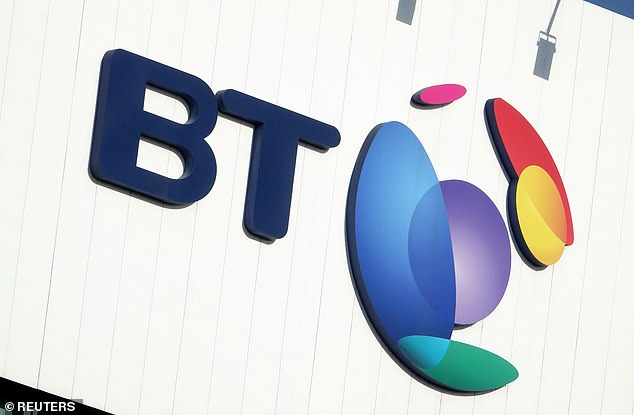 Shares soar: EE-owner BT only had to fork out £452m to buy new 5G airwaves in what turned out to be a cut-price auction

The 5G auction has raised £1.36billion for the Treasury, which is far less than the £2.5billion the industry had predicted.

And it’s not hard to see why – 5G will not only speed up internet on smartphones but will be critical for the development of driverless cars and the ‘internet of things’.

It is also key to the Government’s goal to eliminate mobile signal ‘not-spots’ that blight rural areas. 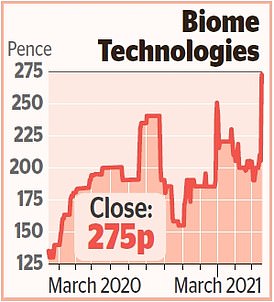 BiomeTechnologies has won more funding for a project that could cut back on large volumes of plastic waste in the UK.

These could be used instead of the plastic shelters usually put round new trees – of which around 45m are planted each year – for protection.

Marc Allera, chief executive of BT’s consumer business, which includes EE, said the outcome was ‘great news for our network, our customers and BT’.

There will be another big auction to come later this year when the Premier League puts its rights up for sale, which could be key to the future of BT Sport.

JP Morgan analysts upgraded Rolls to ‘neutral’ from ‘underperform’ and more than doubled the target price on its stock from 45p to 105p, citing Covid vaccine rollouts and air travel picking back up. Berenberg, meanwhile, raised its target price for Rolls from 130p to 150p.

The gains among BT, Vodafone and Rolls failed to keep the FTSE 100 in the black.

Brent crude fell by 0.7 per cent to below $68 a barrel after the International Energy Agency said talk of a ‘supercycle’ that could see prices rocket was overblown.

However, it also said oil demand could return to pre-pandemic levels of 100m barrels a day by 2023 and could carry on rising until 2026 unless governments take extreme actions to mitigate climate change.

Warhammer figurine maker Games Workshop said trading was in line with expectations in a surprise trading update yesterday, perhaps disappointing investors who had grown used to profit upgrades from the group, particularly during lockdowns.

News that Serco had won an £870million ten-year contract to provide support services at a military base in Canada was met with a lukewarm reception.

Embattled travel group Carnival (down 1 per cent, or 17p, to 1715.5p) is launching what it calls ‘very special’ cruises around the UK this summer for people who have been fully vaccinated with both jabs.

P&O will run the voyages, which will include a seven-night trip around the Scottish islands.

Over in the Pacific, however, Carnival’s Princess Cruises and Holland American Line divisions have had to pause all cruises scheduled to sail to Alaska in June.