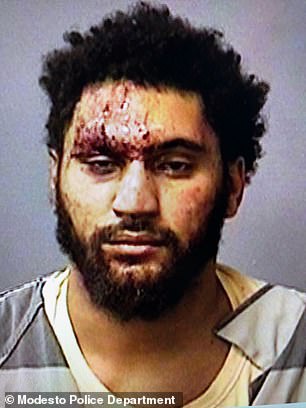 A man who was leaving an Alcoholics Anonymous meeting and had been sober for years was struck and killed by a drunk driver.

According to Modesto police, Ray Galindo, 58, was sitting on the tailgate of his truck in the parking lot outside of Living Sober Fellowship, talking to a new member of the group on April 23, when 22-year-old Braxton Howze allegedly swerved off the road and struck him.

As he lay on the ground, one of his fellow meeting attendees ‘held his hand’ to show their respect, Galindo’s friend, Dee Gisler told the Modesto Bee.

He was later pronounced dead at a local hospital.

Police said Howze was driving on a suspended license from a previous DUI charge at the time and allegedly walked away from the scene but was caught nearby.

He is now being held on a $1 million bond, and faces several charges, including hit and run, driving under the influence, hit and run with injury, gross vehicular manslaughter and driving on a suspended license. 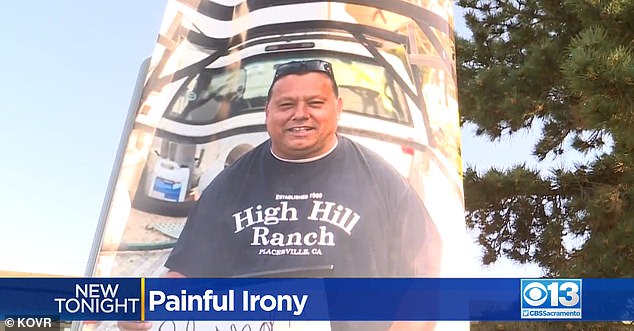 A tribute for Galindo, 58, the victim of a hit-and-run in Modesto, California was created outside of the Living Sober Fellowship where he attended AA meetings

One of the AA leaders, who is just identified as Mark G., said it seemed like Galindo was on his way to sobriety, and had become an active member in the group

‘All of us members in AA have done the exact same thing this man has done,’ Sheila Butler, a friend of Galindo’s, said of drunk driving in the Modesto Bee article, ‘so we have sympathy for him.’

‘We are all in the same rooms [at the meetings] ad we are striving to stay clean and sober,’ she added. ‘This man made a bad decision and it had a very bad outcome.’

Galindo moved to Modesto when he was just a child, and had worked most of his adult life as a union plasterer. He started attending AA meetings about 15 years ago, when he and his ex-wife, Josie Garcia, were going through a divorce.

She said he has struggled with sobriety over the years, but would always go back to AA. He made  amends with her and their sons, Ray Galindo Jr. and Thomas Galindo, before his death, she said.

‘He has come in and out of the program several times,’ one of the AA leaders, who is just referred to as Mark G., told CBS Sacramento, ‘but it seemed like this time he was on his way.’ 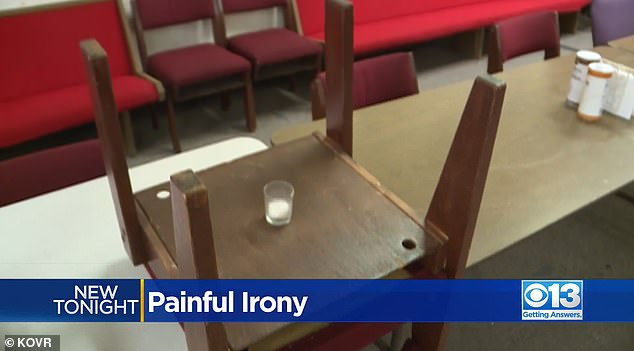 Galindo became an active member of the AA group, leading some of the committees. In his free time, he also coached several softball teams, and enjoyed taking his 9-year-old son, Elijah, to a local ranch to ride horses, or on AA-sponsored camping and fishing events.

‘Ray didn’t have much, but what he had he gave freely and was blessed to do so,’ said Dee Dee Leslie, Elijah’s mother said. ‘Every time you asked him how he was doing it was always the same: ‘I am blessed.’

Galindo is remembered as ‘a standup guy who always wanted to lend a hand,’ Mark G. said.

‘When I first got into sobriety, if I needed food or help or a hug, ray was the go-to-guy,’ Butler said. ‘He’s helped many young people come into the room [for meetings]. He’s bought them tennis shoes, clothes, whatever they needed.’

In fact, friends say, he was not scheduled to be at an AA meeting the night he died, but attended to welcome a new member.

His seat has since been turned upside down with a candle on top, CBS reports, and a vigil for him was started outside of the sobriety center.