London, Manchester and other cities could face spikes in coronavirus cases because millions are refusing to get the vaccine, a top infectious diseases expert has warned.

As many as 17 of the 21 local authorities with the worst jab uptake rates in England are in the capital, according to NHS data, having inoculated less than 70 per cent of their over-55s.

Manchester’s centre has also failed to jab more than two-thirds of those in this age group, risking another spike in cases that could lead to more deaths.

Studies have shown vaccines cut someone’s risk of catching Covid, and almost eliminate their risk of being hospitalised or dying if they are infected.

Boris Johnson has made the shots a cornerstone of his ‘roadmap’ out of lockdown, and prioritised them for older age groups who are more at risk of death or serious illness from the disease.

But the Prime Minister has also refused to rule out tightening the rules in areas where spiralling infections are putting residents at risk. 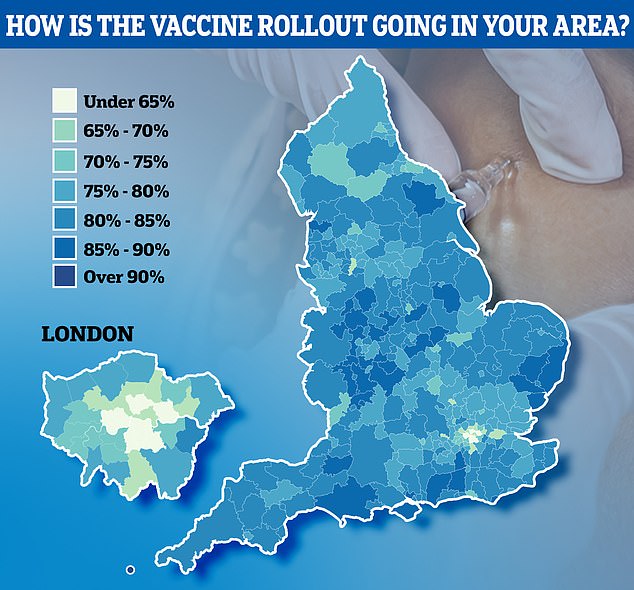 NHS England figures show 79 per cent of over-55s in the country had at least one dose of the vaccine by March 14, but London is significantly lagging behind in uptake

Britain risks ‘squandering the advantages of our vaccination programme’ by moving too slowly to lift the lockdown, Conservative MPs warned yesterday.

Amid signs of a gathering rebellion, a string of MPs said they were ready to vote against the Government this week when it seeks to extend Covid laws to the end of September.

The NHS yesterday revealed a third consecutive record day of vaccinations with 844,285 on Saturday.

A higher daily total of 873,784 was initially reported by the Prime Minister and Health Secretary Matt Hancock, who later clarified that figures from Scotland had ‘been revised down slightly’.

In the hour between 11am and noon on Saturday, a record 27 people per second were vaccinated.

The Institute of Economic Affairs yesterday said the success of the programme meant there was now ‘a strong case’ for bringing forward Boris Johnson’s road map dates by four weeks.

Professor Hayward told BBC Radio 4’s Today programme that more than three million over-55s are yet to get their first dose, including half a million over-65s.

He warned this was limiting the Government’s ‘leeway’ to lower curbs, saying that if cases again got out of control ‘there’s a lot of people who could still get very ill.

He added: ‘We are keeping an eye on cases but we’re also being particularly careful to see how those are translating into hospitalisations and deaths.’

Vaccine uptake rates are often lower in major cities, which experts say is linked to higher levels of deprivation and larger black, Asian and minority ethnic communities (BAME) which traditionally are more sceptic of vaccines.

The NHS has launched a’blueprint’ for tackling this, which involves doctors and nurses speaking to those with concerns alongside community leaders.

Vaccination clinics have also been set up in religious buildings and community centres to encourage everyone to get their first and second dose.

Professor Hayward also said today a ‘traffic light system’ could be used to allow Britons to go abroad over the summer holidays.

Professor Hayward told Radio 4: ‘I suspect what we may end up with is some sort of traffic light system with some countries that are no-go areas, for example likely to be South Africa and South America.

Ministers have urged Britons to ‘hold off’ on booking a foreign trip this year, saying it would be ‘premature’ and ‘potentially risky’.

Mr Johnson’s  lockdown exit roadmap states the taskforce will report on April 12 with recommendations for securing a return to foreign travel ‘as soon as possible’.

The Government will then determine when international travel should resume but it will be ‘no earlier than 17 May’.

A spike in coronavirus cases in some European countries and the spread of variants of the disease have sparked fears of the May 17 date being pushed back and Ms Whately today refused to be drawn on the issue. 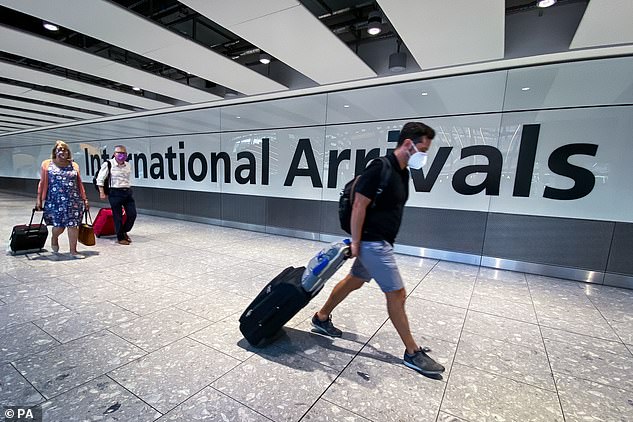 Care Minister Helen Whately said it ‘feels premature’ to book an international holiday now before a Government taskforce reports with a timeline for resuming travel.

Ms Whately told BBC Breakfast: ‘I know everybody feels like it is time for a holiday, we all need that.

‘It just so happens that when I was on holiday last August, I in fact booked my next holiday, which is a UK holiday, for later on in the summer.

‘But my advice would be to anybody right now just to hold off on booking international travel.

‘The Prime Minister launched a taskforce looking specifically at international travel that will be reporting back shortly and it just feels premature to be booking international holidays at the moment.’

Asked whether the roadmap target of foreign travel possibly starting up on May 17 was likely to be pushed back, Ms Whately added: ‘I don’t think it is helpful for me to say one way or the other.

‘What I would counsel is caution at the moment for people to hold off on booking because, as anybody can see, we are in a situation where there are rising rates in many countries in Europe and we know that also something that comes with rising rates is increased rates of variants, which is why it is so important that we are going to be able to test more rapidly for variants of concerns, as I have outlined.’

Many Tory MPs believe the success of the UK’s vaccination drive should allow Brits to take holidays abroad in the not too distant future.

Sir Graham Brady, chairman of the 1922 Committee of backbench Tory MPs, told The Times: ‘The huge success of Britain’s vaccination programme, together with the steps taken by the travel industry, mean that British people should be able to look forward to holidays abroad this summer.