Speaking at a press conference alongside Ukrainian-American Rep. Victoria Spartz, also a Republican, Graham said he would be introducing a resolution aimed at supporting Ukraine’s request for Putin to stand trial at The Hague.

Earlier Spartz had said Putin was not waging a ‘war’ but a ‘genocide of the Ukrainian people.’

‘It’s been hard to sleep at night, watching war crimes unfold on television and just feeling frustrated that you can’t do more. So I’m going to take that frustration and channel it into action,’ Graham said.

Graham accused Russia’s autocratic ruler of murdering opponents and stealing from his own country over his more than two decades in power.

He also took aim at his ally former President Donald Trump’s comments from late last week praising Putin as ‘savvy’ and a ‘genius’ for ordering a brutal and unprovoked invasion of Ukraine.

‘I think I know what he was trying to say,’ Graham offered when asked about Trump’s praise.

It comes as a barrage of Russian airstrikes and other explosions continue to batter Ukraine’s cities. Kyiv’s forces have put up an impressive resistance to Moscow’s troops, but they continue to close in on the capital as foreign officials and intelligence reports share concerns that Putin may only ramp up his brutal tactics.

As of Wednesday afternoon the Ukrainian Ministry of Defense denied reports that the city of Kherson became the first to fall to Russian soldiers. 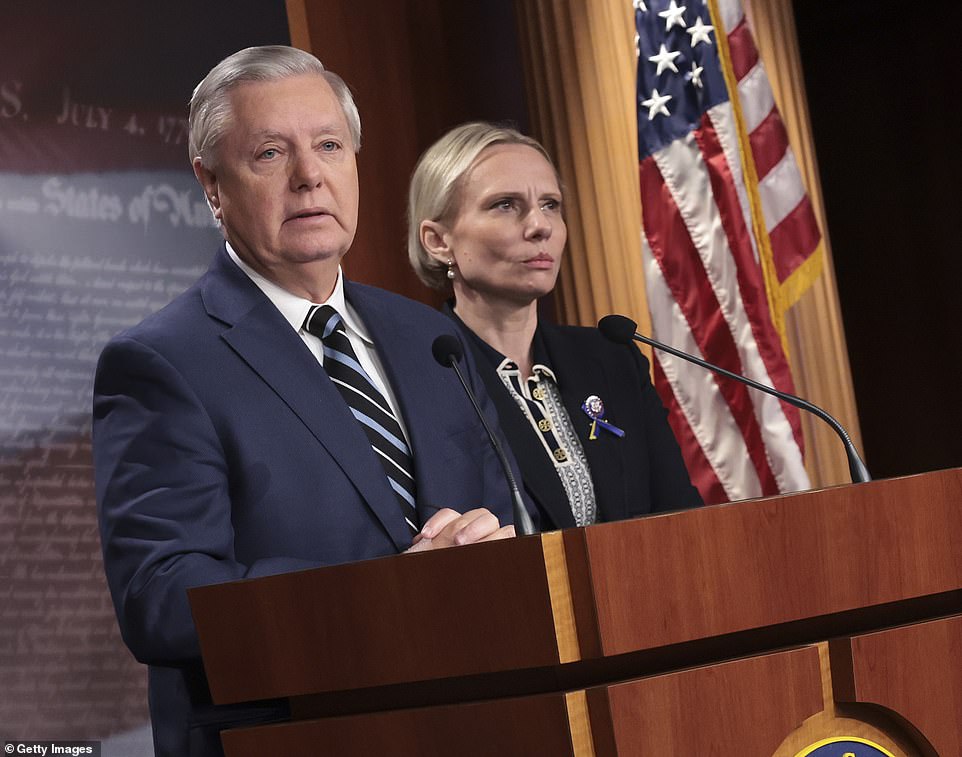 Lindsey Graham (left) and Ukrainian-born Indiana GOP Rep. Victoria Spartz (right) said they would be introducing resolutions in the House and Senate to support Kyiv’s calls for a war crimes trial against Vladimir Putin 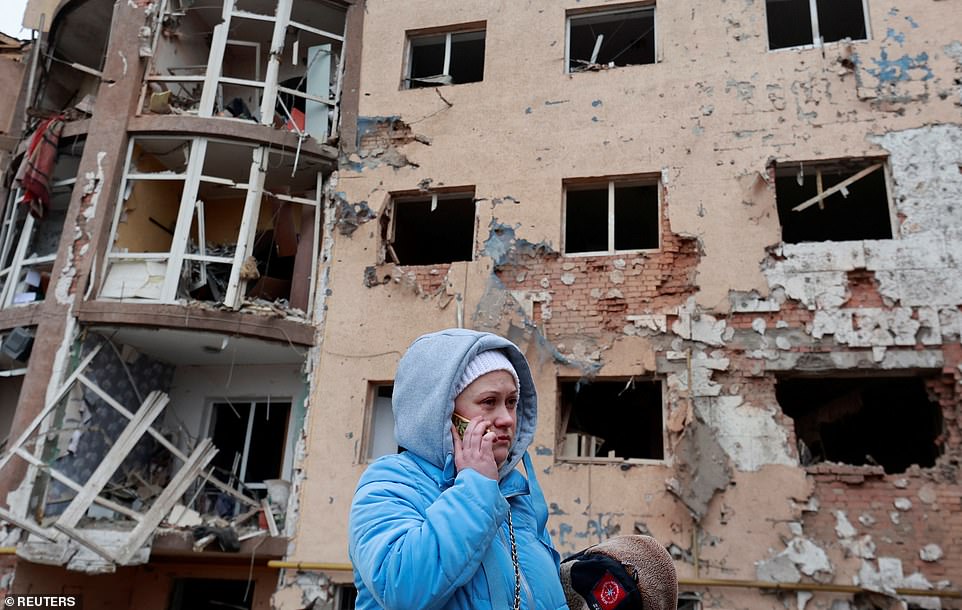 A woman stands in front of a residential building destroyed by recent shelling, as Russia’s invasion of Ukraine continues, in the city of Irpin in the Kyiv region on March 2. Spartz said Wednesday that Putin’s actions amounted to a ‘genocide’ 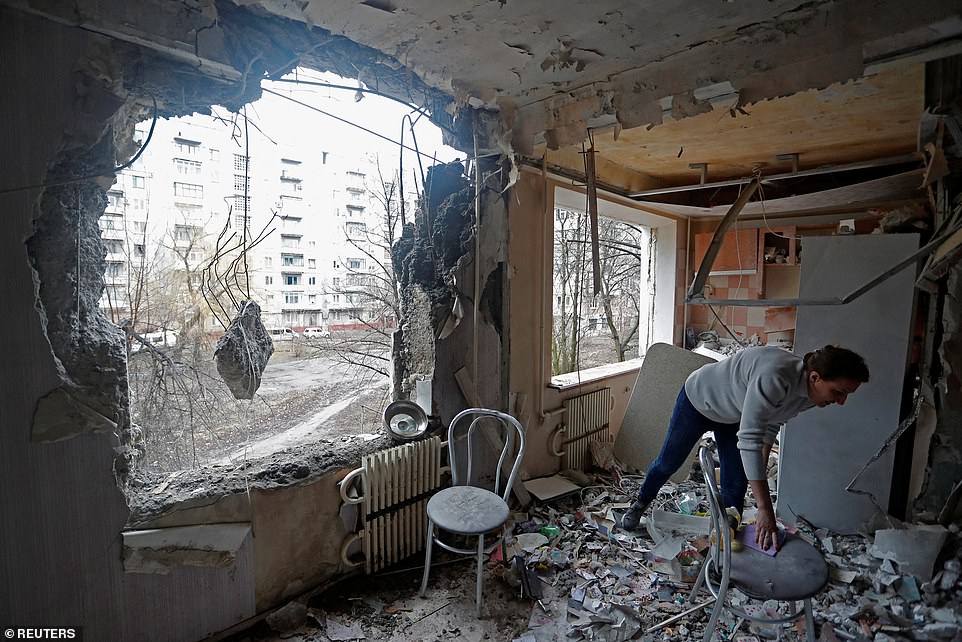 A woman inspects debris inside an apartment of a residential building, which locals said was damaged by recent shelling, in the separatist-run Donetsk region on March 2

Ukrainian President Volodymyr Zelensky posted a video on Facebook on Wednesday, as fighting entered its seventh day, delivering a chilling warning that Putin gave his soldiers an order to ‘erase’ Ukraine and its people.

Days earlier he called for Putin to stand trial at the International Criminal Court. Since then UK Prime Minister Boris Johnson has accused Putin of committing war crimes and earlier on Wednesday the US ambassador to the United Nations claims Russia was using weapons outlawed by the Geneva convention.

‘There is no rule of law in Russia. There is no other place to take this complaint to other than the International Criminal Court,’ Graham said.

‘So I’m hoping that Republicans and Democrats will speak with one voice when it comes to the rule of law, that what Putin is doing is a war crime.’

Graham added that he hoped to send a message to Putin’s cronies and top officials that they too could ‘end up in the Hague’ if they continue to follow the authoritarian’s orders.

After the press conference Graham said he would be placing calls to elected officials around the world to try and gin up support for such a resolution.

‘I’m trying to get parliaments throughout the world to follow our lead here, to send a clear signal to the Russian military: What will happen if you go down the road of committing atrocities against Ukrainian people,’ he said.

Spartz, who represents Indiana in the House but was born and raised in Ukraine, introduced a measure in Congress’ lower chamber aimed at providing more support for Ukraine in conjunction with Graham’s.

‘Vladimir Putin has invaded a sovereign nation and terrorized its civilians. His aggression will not stop with Ukraine. The gravity of this moment calls for Congress to speak with one voice. Today, the House voted overwhelmingly to support stronger sanctions against Russia, immediate and more military aid to Ukraine, and energy independence for America. Now, the Biden administration must take immediate action to keep military aid flowing to Ukraine, displace Russian oil and gas, and regain global energy leadership,’ McCarthy said.

The International Criminal Court’s top prosecutor said late last month that he would open an investigation into possible war crimes committed in Ukraine. 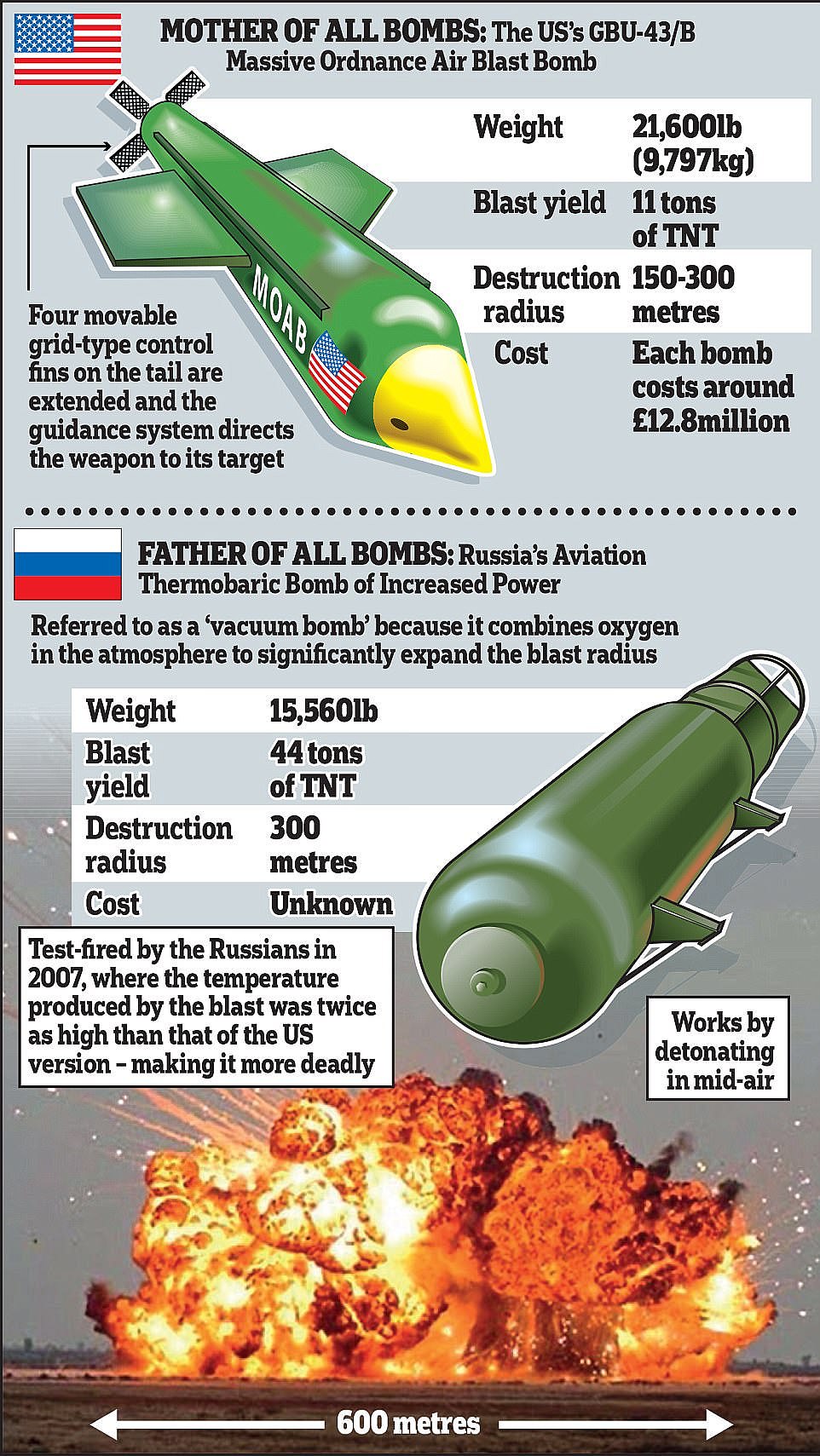 President Joe Biden said the same day that it is clear Putin is targeting civilians in Ukraine and insisted that ‘nothing is off the table’ with banning Russian gas imports, a drastic move that would send energy prices soaring further.

‘It’s clear they are,’ Biden said, when asked by a reporter if Russia is targeting civilians as he left the White House for Wisconsin.

However Biden said it was too early to say whether Russia had committed war crimes.

‘We are following it very closely. It’s early to say that,’ he told reporters.

The president announced another round of sanctions on both Russia and Belarus’s defense sector, after Ukraine announced Belarus had joined the fight on Putin’s side.

The Pentagon said Wednesday that Russia has now deployed about 70 percent of the troops it had amassed on the Ukraine border, about 100,000.

US Ambassador to the United Nations Linda Thomas-Greenfield spoke at the General Assembly in New York City shortly before member nations voted overwhelmingly to demand Putin draw back his troops. 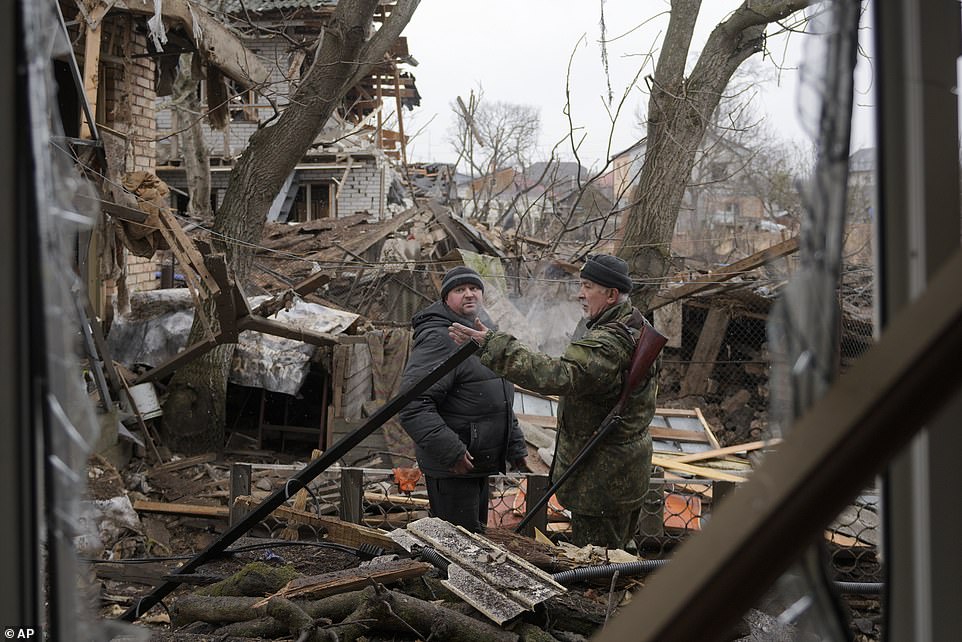 Andrey Goncharuk, 68, right, a member of the territorial defense speaks to a man in the backyard of a house damaged by a Russian airstrike, according to locals 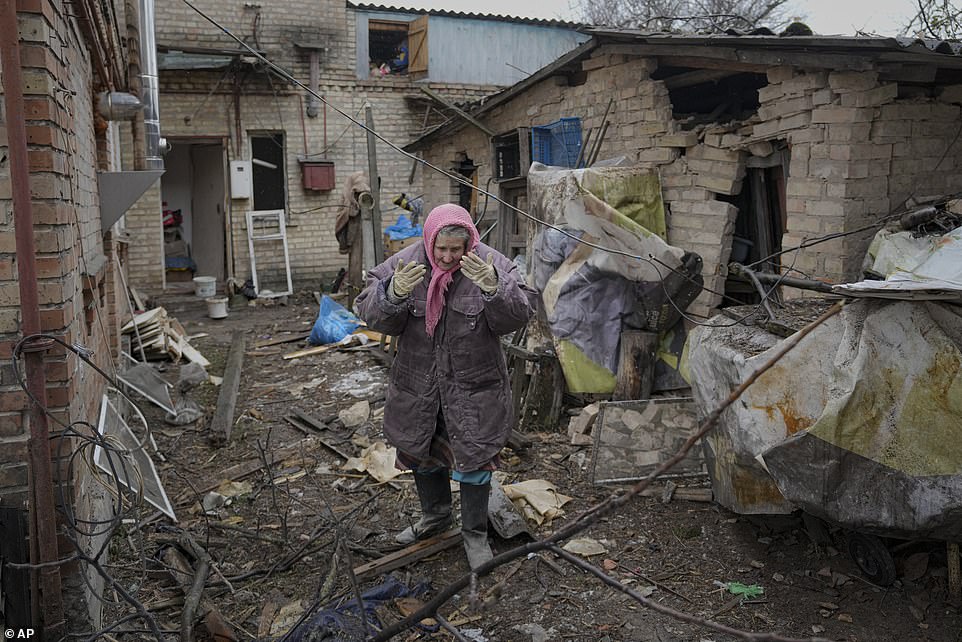 A woman is overwhelmed by emotion in the backyard of a house damaged by a reported Russian airstrike. Putin’s troops have been battering Ukraine for seven straight days 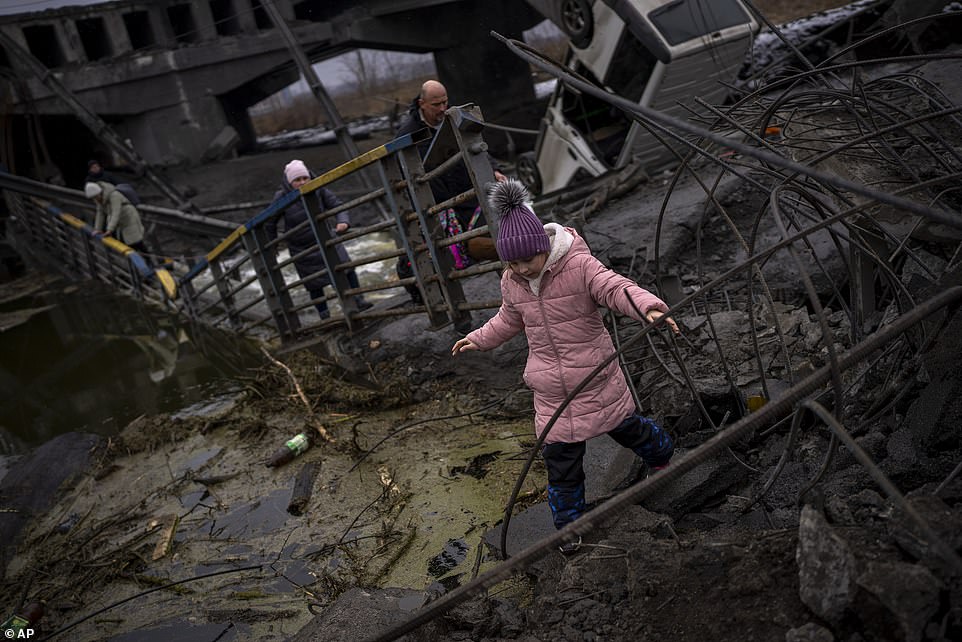 A girl walks as she is fleeing with her family across a destroyed bridge, on the outskirts of Kyiv on March 2. Hundreds of thousands of Ukrainians have been displaced by the war so far

The US and 140 other countries voted to condemn Russia’s attack. Russia, Syria, Belarus, Eritrea and North Korea voted against.

In a marked departure from Biden’s more hesitant tone, the diplomat did not shy away from accusing Russian forces of committing ‘war crimes’ within their neighbor’s borders.

Wearing a blue and yellow scarf as a show of solidarity with Ukraine, Thomas-Greenfield made an emotional plea to Russian soldiers on the front lines.

‘To the Russian soldiers sent to the front lines of an unjust, unnecessary war, I say your leaders are lying to you. Do not commit war crimes,’ Thomas-Greenfield said. ‘Do everything you can to put down your weapons and leave Ukraine.’

After accusing Russia of human rights abuses, she continued: ‘Putin declared war, Ukraine has defended itself with great courage and vigor.’

‘Russia has bombed residential apartment buildings, it has bombed sacred burial grounds, it has shelled kindergartens and orphanages and hospitals.

But the US ambassador said it’s now apparent that ‘Russia is preparing to increase the brutality of its campaign against Ukraine.’

‘We’ve seen videos of Russian forces moving exceptionally lethal weaponry into Ukraine, which has no place on the battlefield. That includes cluster munitions and vacuum bombs, which are banned under the Geneva Convention,’ Thomas-Greenfield said.

‘We all have seen the 40-mile long, lethal convoy charging toward Kyiv. President Putin continues to escalate, putting Russia’s nuclear forces on high alert, threatening to invade Finland and Sweden.’

Cluster munitions explode in mid-air to rain down dozens or even hundreds of mini-bombs, which can kill indiscriminately, and are banned by international law.

A vacuum bomb works by sucking in oxygen from the surrounding air to generate a high-temperature explosion, and is capable of vaporizing human bodies. Ukraine officials have already claimed Russians are using such weapons.

Russia has today stepped up its attacks on Ukraine’s major cities as officials in Mariupol said a ‘full-scale genocide’ was underway as Putin’s men unleashed a 15-hour artillery barrage while Kharkiv also came under heavy bombardment in a dark sign of what could be to come in the capital Kyiv.

Mariupol, located in the south of Ukraine on the Black Sea, has been surrounded by Russian forces and struck by artillery in an apparent attempt to bomb the city into submission as Putin’s men resort to ‘medieval’ tactics. Sergiy Orlov, the deputy mayor, said entire districts had been leveled with such heavy barrages that medics cannot get in to retrieve the dead.

‘We are near to a humanitarian catastrophe,’ he said. ‘Russian forces are several kilometers away on all sides,’ he added. ‘The Ukrainian army is brave and they will continue to defend the city, but Russia does not fight with their army, they just destroy districts… We are in a terrible situation.’

Meanwhile Kharkiv, Ukraine’s second city, came under heavy barrage in the early hours as Russian troops try to surround and seize it after days of fighting – with a rocket slamming into a university building and police station in the early hours before the city council was also struck, with one of the explosions caught in a dramatic video.

The bombardment gives a dark taste of what is likely to come for other cities such as Kyiv after analysts warned Russia’s military – having suffered heavy losses trying to pull off ambitious precision strikes – was likely to resort to surrounding cities and bombing them into submission to force a bloody victory.