Legal & General will tie its executive pay to climate targets as it embarks on a mission to become more environmentally friendly.

The FTSE 100 pensions and insurance group said its executive pay ‘scorecard’ – which measures how far the business has gone to achieving its annual targets and decides how much of the maximum bonus its bosses should get – would from this year include specific climate-related goals.

L&G, which is led by veteran insurance boss Nigel Wilson, has already committed to becoming net zero on carbon dioxide emissions by 2050. 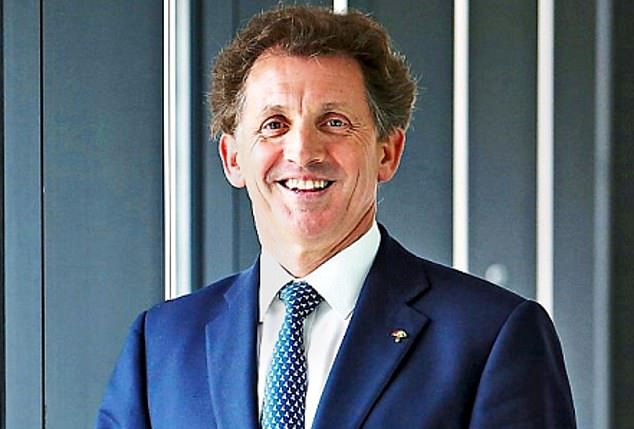 But in an updated set of policies yesterday, the firm said it would be halving the carbon intensity – or how much emissions are produced by businesses to do their job – of its own £95billion investment portfolio by 2030.

The group’s asset management arm LGIM, which manages £1.3 trillion of savers’ cash, will push even harder to encourage the companies it invests in to behave responsibly.

LGIM’s property division is working with landlords to reduce the emissions from the buildings it invests in, and the housebuilding operations which L&G funds will be net zero by 2030.

The company has also vowed to make its own offices and business travel net zero by 2030.

‘To deliver real change, actions must match words. We are fully committed to our journey to net zero, confirming not just our ‘net zero by 2050′ destination, but a credible roadmap to get there with significant progress by 2030.’

Last year, Wilson was paid a total of £2million. He could have bagged a bonus worth £1.5million, but only received 23.5 per cent of this even before climate targets were introduced.

A recent report from accountancy firm PwC found that almost half of FTSE 100 companies are now linking their executive pay packages to at least one of their environmental, social or governance targets.

The average executive at one of these companies stands to miss out on 15 per cent of their bonus if the targets are not met, PwC found.

But few of these firms tie their executive pay explicitly to environmental measures, and less than half focus on their ‘green’ responsibilities outside of regulatory requirements or immediate risk management.

Oil giant BP is one company which has set an example – 10 per cent of executives’ annual bonus depends on the company reducing emissions over the year.

Now investment firms such as L&G have come under more pressure to follow suit, as customers want their money to be put to work for good.

Rival Aviva last month unveiled plans to become net zero by 2040, and said it would funnel £10billion of worker’s pension money into climate-friendly investments by the end of next year. It also vowed to ditch coal investments by 2022.

And in 2019, the world’s largest asset manager Blackrock threatened to stop investing in companies unless they took action on climate change.