Kyiv’s mayor paid a visit to a newlywed couple who got married the frontlines, donned in military uniform and serenaded by soldiers, on the frontline in Ukraine.

Video shared online shows a loved-up pair, Lesya and Valeriy, who are with the territorial defence, celebrating the nuptials near Kyiv as Vitali Klitschko offers the pair his blessings and gives the bride a good luck kiss.

In a tweet, Klitschko shared a clip of the ceremony, with the pair surrounded by applause, cameras and fellow soldiers, saying that ‘life goes on’.

He wrote: ‘Today I greeted the soldiers of one of the battalions of the capital’s defence of the capital Lesya and Valeria. They have been living in a civil marriage for a long time, and now they have decided to get married.

‘The ceremony took place next to one of the checkpoints. Life goes on! And we will protect the life of Kyiv, Kyivites, our state!’

A video shows the grinning couple holding flowers as fellow soldiers around them shout ‘Glory to Ukraine!’ in the heartfelt moment, captured yesterday.

Lesya could be seen holding a bouquet of flowers as both her and Valeriy clutched champagne flutes. 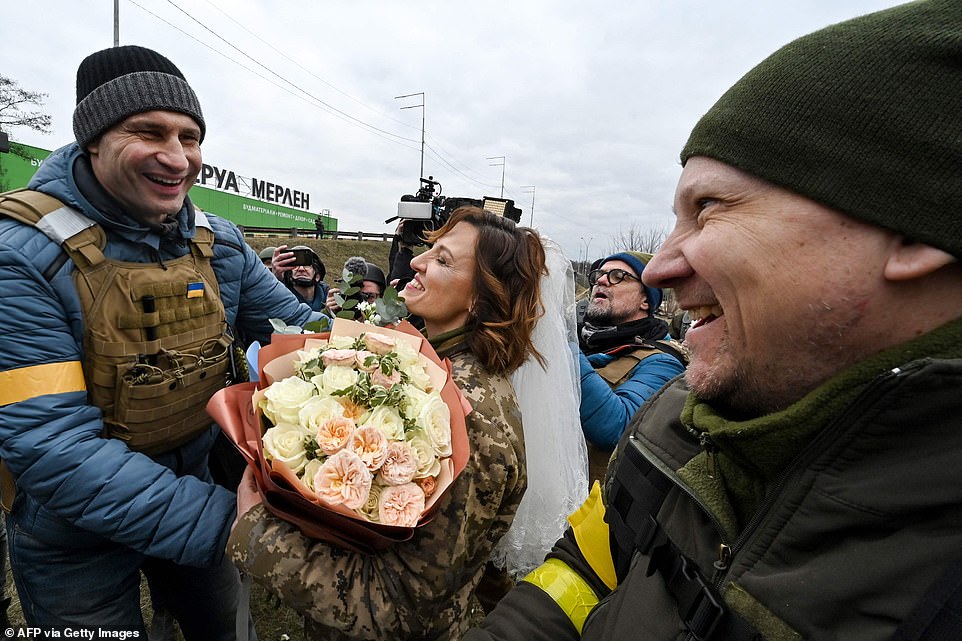 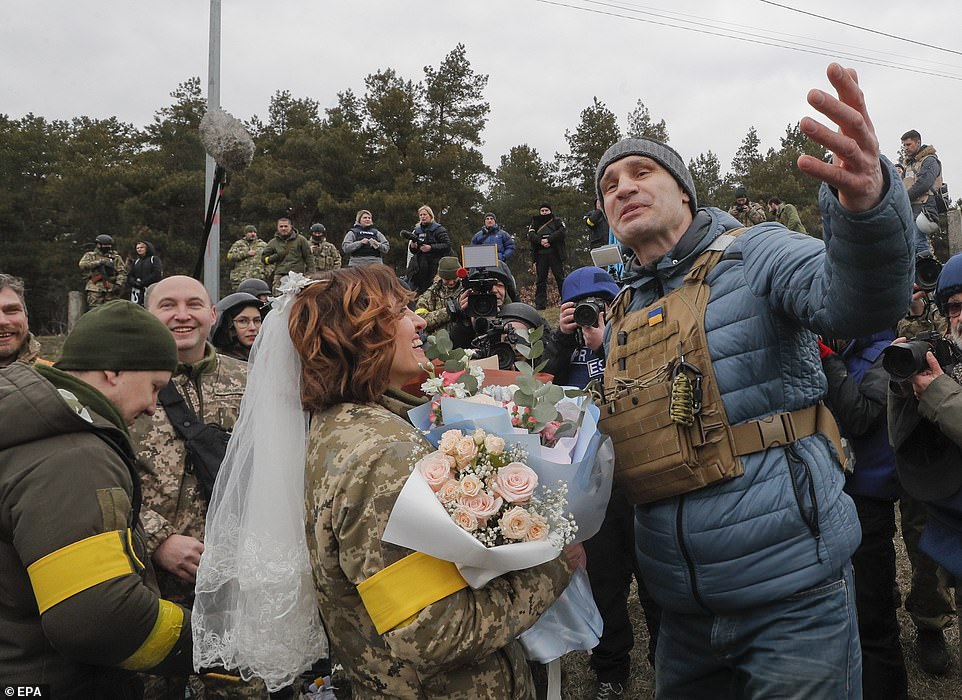 Vitali Klitschko offered his congratulations, as well as a good luck kiss, to the newlywed couple who tied the knot in their military uniforms yesterday

Both the newlyweds were applauded and the bride looks to have swapped out her helmet for a white veil as she smiled and held Valeriy’s hand.

A group of fellow soldiers also joined in a chorus to the couple, with one man playing what appears to be a bandura, a Ukrainian folk musical instrument similar to a lute.

The footage was shared by Paul Ronzheimer, reporter for German news outlet BILD-Zeitung.

It has since received around 22,000 views and accrued hundreds of likes, with most comments wishing them happiness and prosperity.

One of the soldiers also appears to be wearing an Orthodox Christian cross, often seen at weddings in the country where the religion is followed by a majority of people. 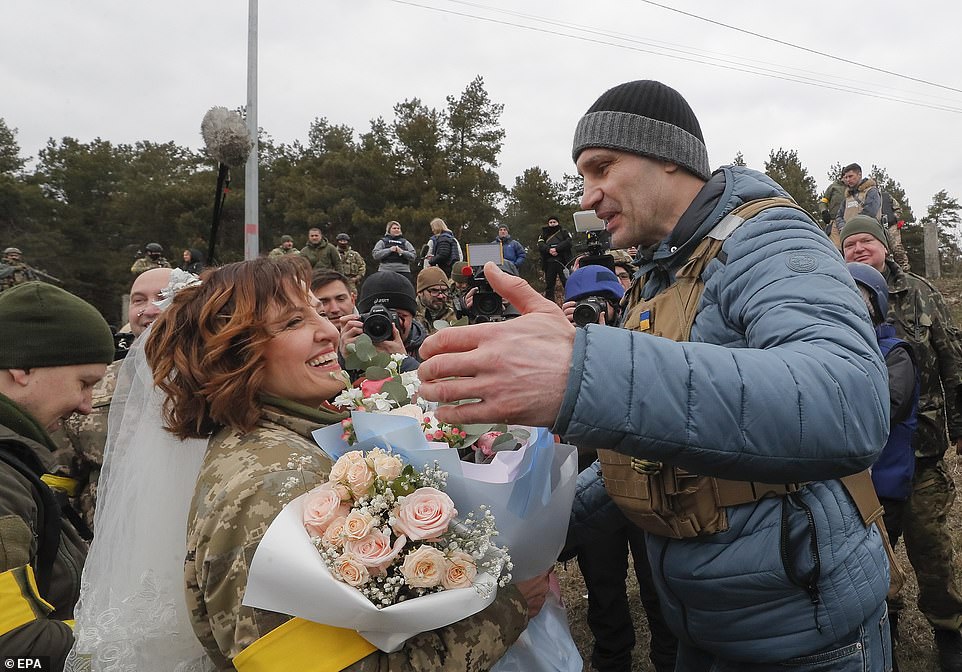 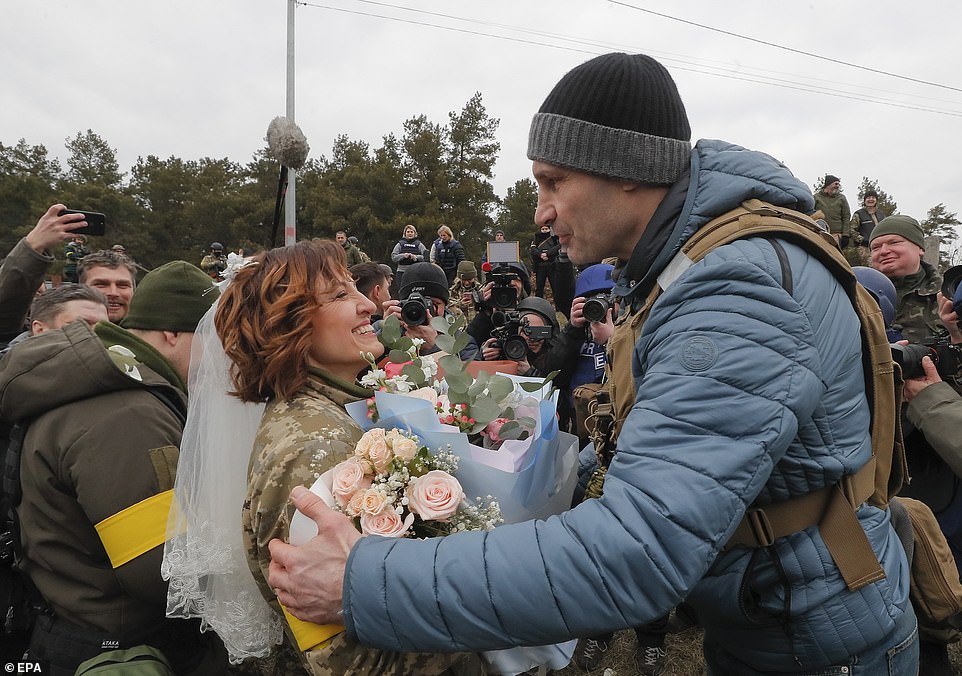 Vitali Klitschko paid a visit to a blockpost near Kyiv, to offer his well-wishes and blessings to two newlyweds in the territorial defence 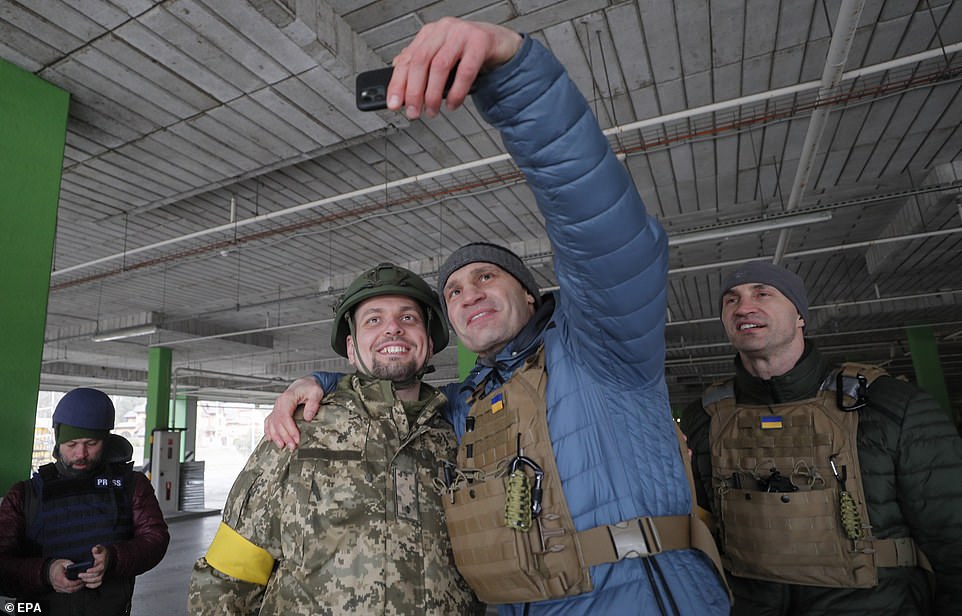 Vitaly Klitschko took a selfie with territorial defence fighters as his brother Vladimir (right) looked on, at a blockpost near Kyiv yesterday 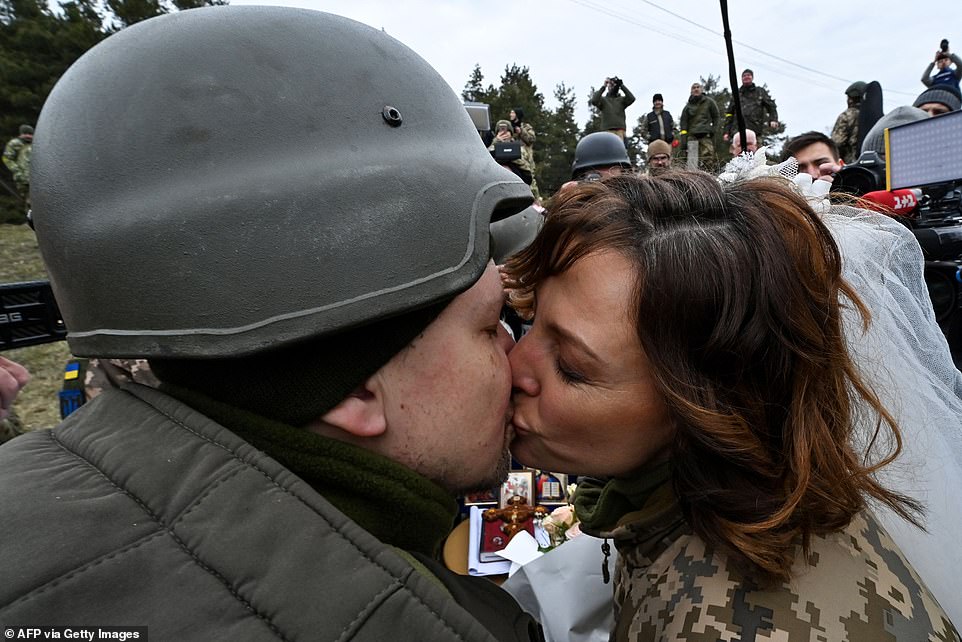 Valeriy and Lesya kissed as they got married not far from check-point on the Kyiv outskirts yesterday, in what appeared to be an Orthodox Christian ceremony 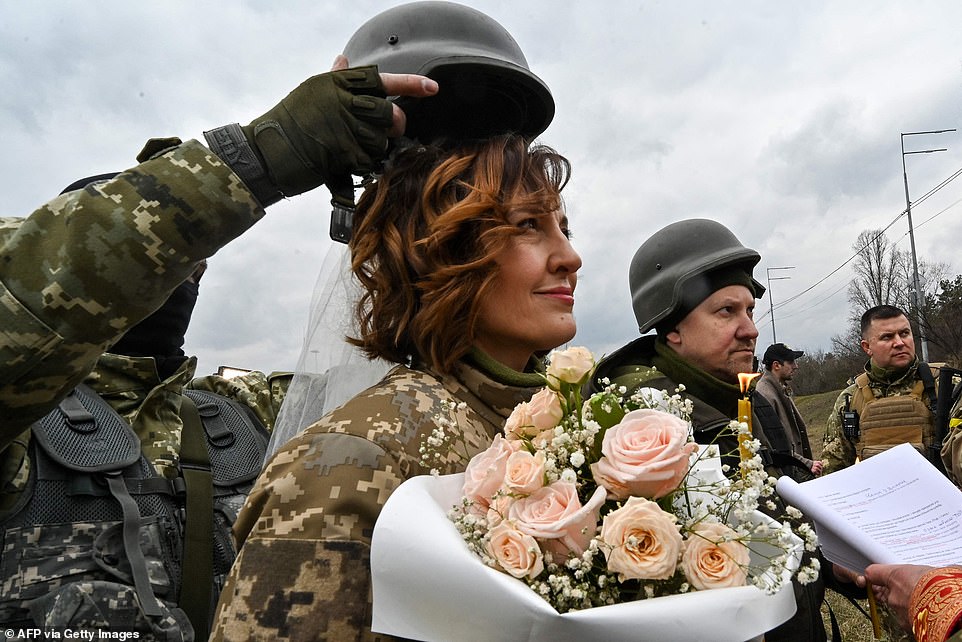 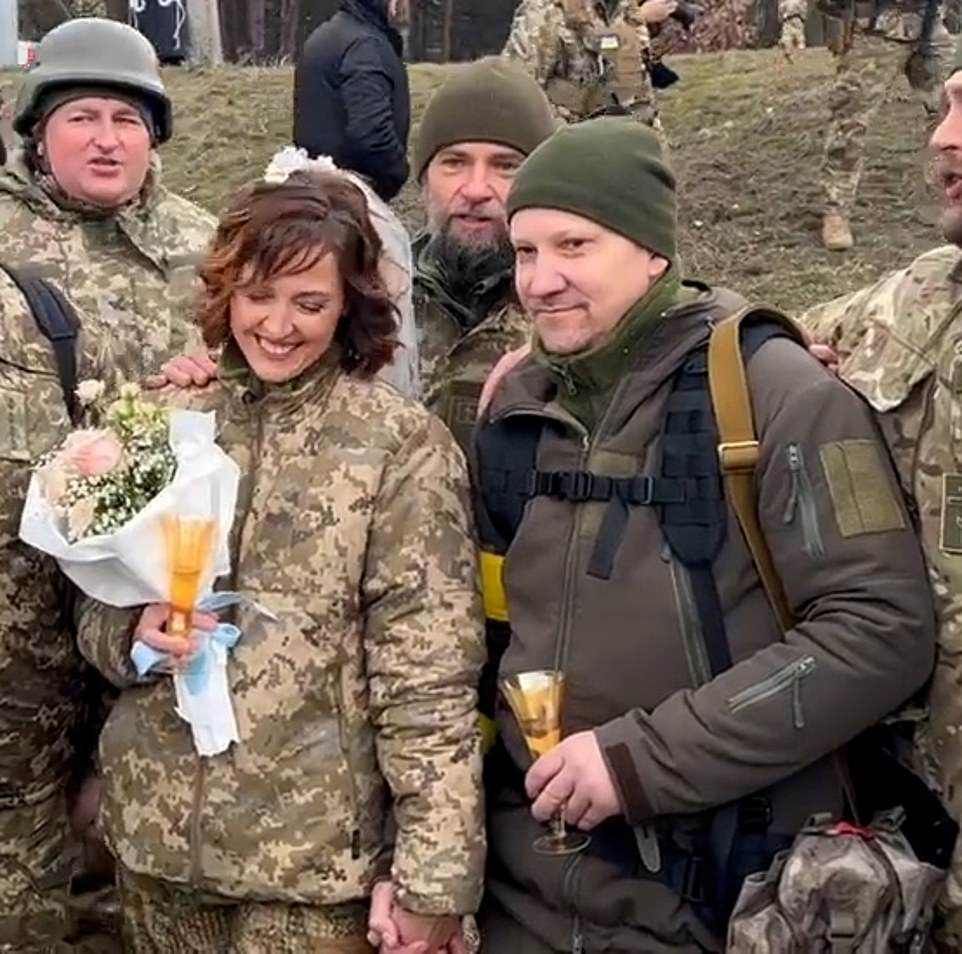 Lesya could be seen holding a bouquet of flowers and Valeriy, a champagne flute, as the newlyweds were applauded at their wedding

Volodymyr Zelensky has vowed that ‘God will not forgive’ and Ukraine ‘will not forget’ the slaughter of civilians by Russian, saying a ‘day of judgement’ is coming for them as cities were hit by fresh bombardments this morning with Vladimir Putin’s invasion entering its twelfth day.

Red Cross volunteers working in the heavily besieged city of Mariupol said their workers had attempted to use one of the ‘corridors’ out of Mariupol on Sunday, only to find land mines had been laid across it. 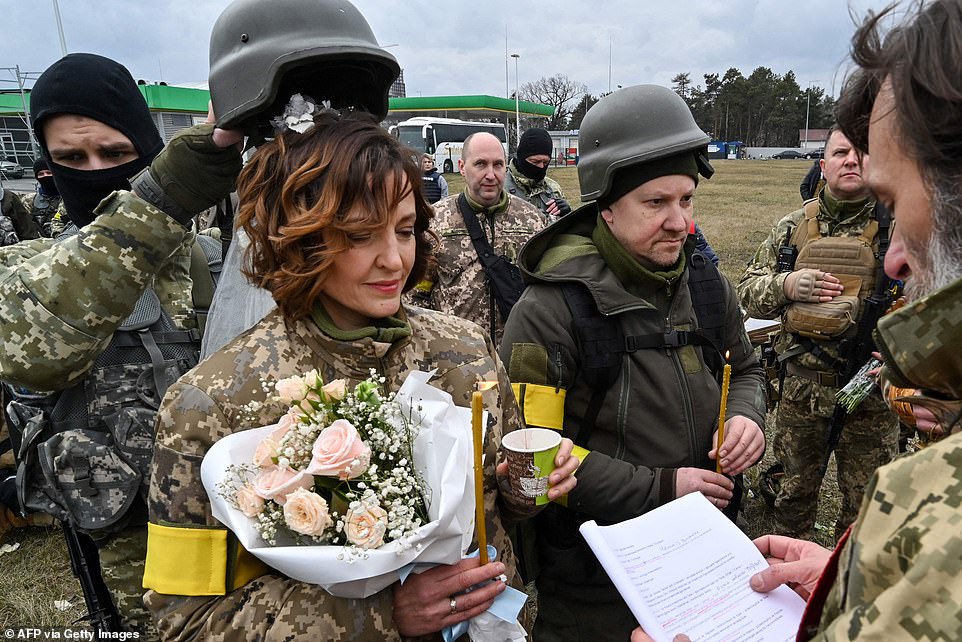 The newlywed couple was filmed getting married on the frontlines, donned in military uniform and surrounded by fellow soldiers 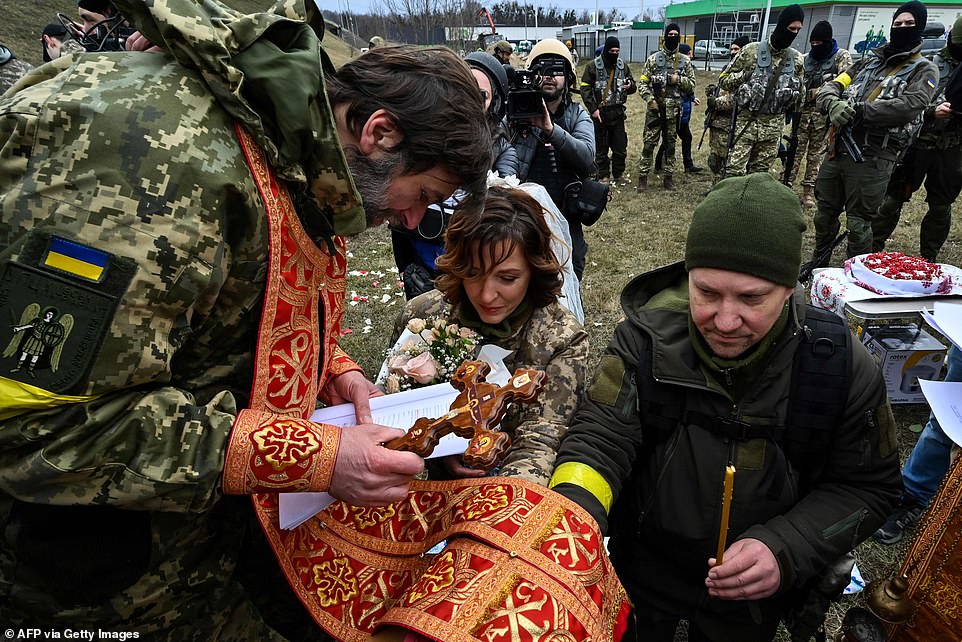 The grinning newlyweds celebrated their nuptials on the frontlines yesterday, surrounded by fellow servicemen at post near Kyiv 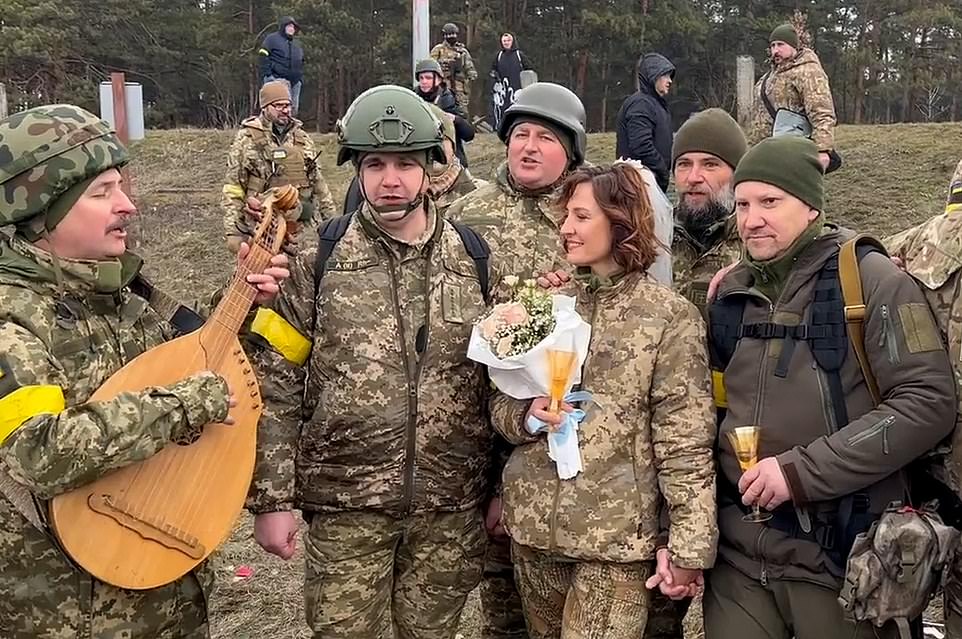 Video shared online showed a loved-up pair, called Lesya and Valeriy, who are with the territorial defense, celebrating the nuptials near Kyiv, Ukraine 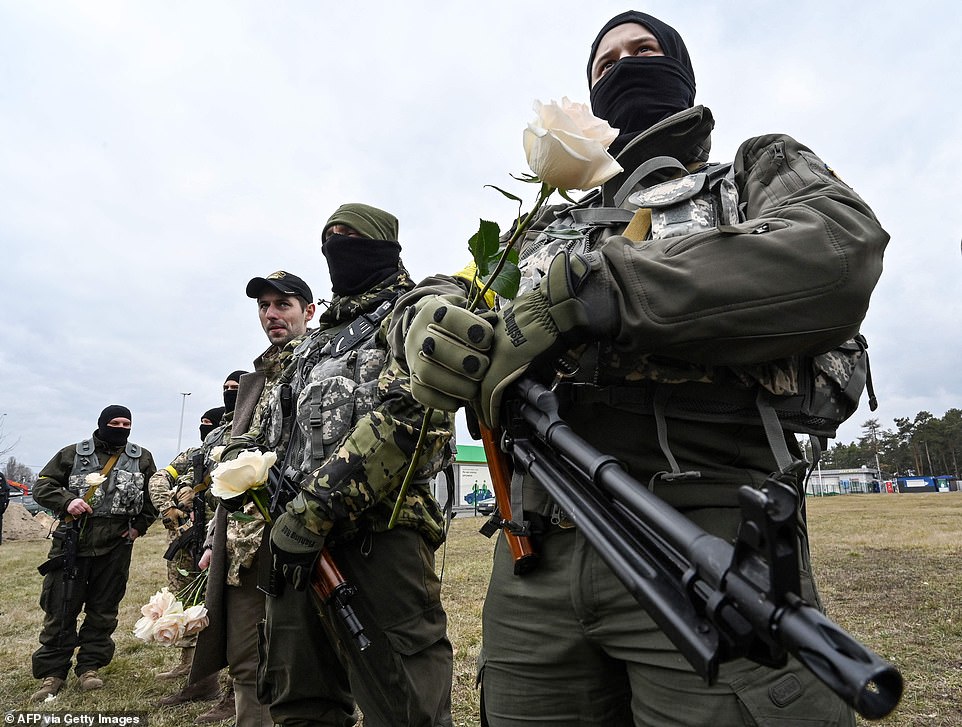 Servicemen of Ukrainian territorial defence attended a wedding ceremony not far from check-point on the Kyiv outskirts, pictured yesterday 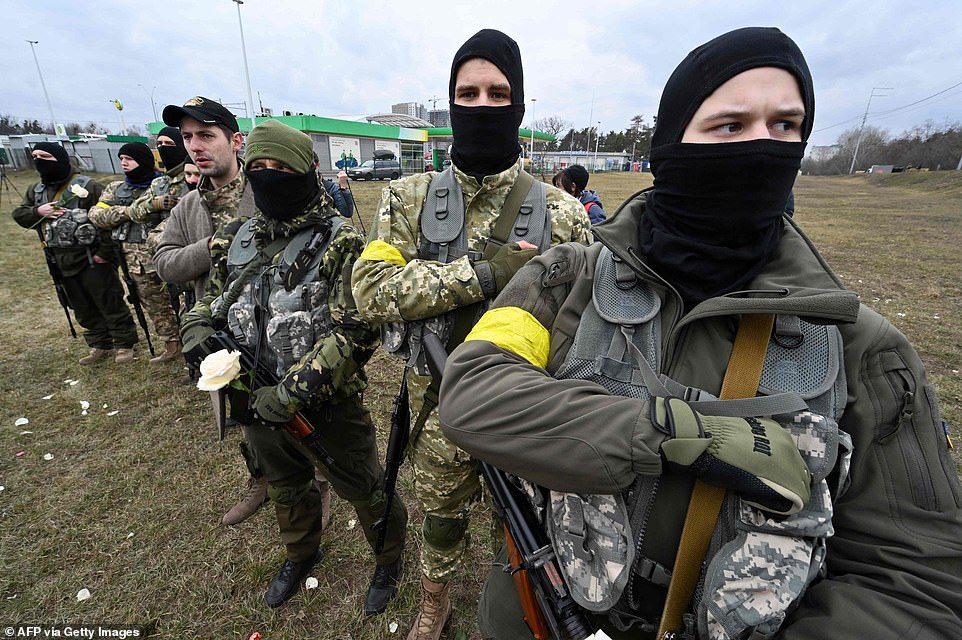 Servicemen, pictured yesterday, held flowers as they celebrated the newlywed couple, in a wedding ceremony on the frontline 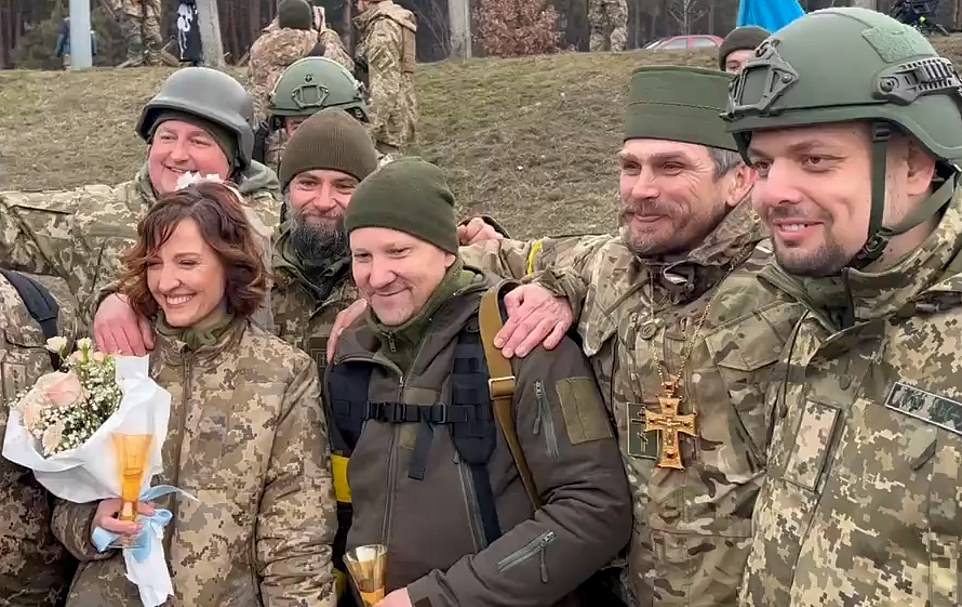 One of the soldiers also appeared to have worn an Orthodox Christian cross, often seen in weddings in the country, at the nuptials yesterday