Kew Gardens is growing woke! Famed attraction will have ‘decolonised’ labelling showing visitors how plants played a part in the slave trade

By Kumail Jaffer For The Daily Mail

Kew Gardens has vowed to show visitors how plants on display played a part in British colonialism and the slave trade.

The famous botanic gardens in London will change display boards for plants such as sugar cane – previously harvested by slaves – to highlight their ‘imperial legacy’.

Kew director Richard Deverell said the gardens – a major attraction for UK and overseas visitors before the pandemic – would ‘move quickly to decolonise’ collections.

However, the ‘woke’ move caused anger as Tory MP Sir John Hayes said he would inquire about the cost to the taxpayer for the publicly-funded gardens.

Sir John, of the parliamentary Common Sense group, told the Mail: ‘This is preposterous posturing by people who are so out of touch with the sentiment of patriotic Britain. 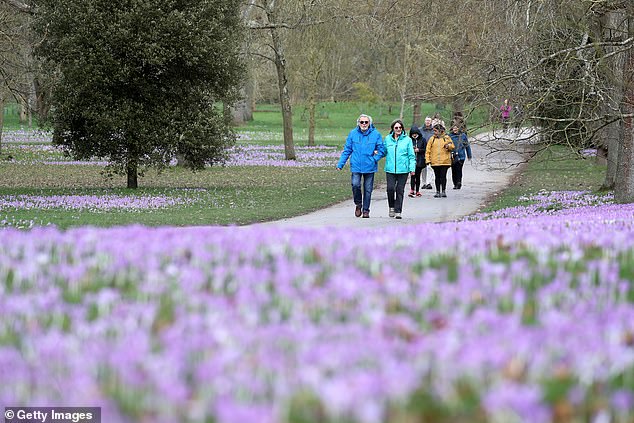 The famous botanic gardens in London will change display boards for plants such as sugar cane – previously harvested by slaves – to highlight their ‘imperial legacy’. Pictured, walkers in Kew Gardens last month

‘They would be better off spending the rest of their days in a potting shed.

‘This is typically bourgeois liberal arrogance which is ill-fitting of people that get public funding.’

The sugar cane display at the 326-acre Royal Botanic Gardens – a world heritage site in south-west London – will be the first to be reworded.

It was the main crop produced on Caribbean plantations – then part of British colonies – during the 18th and 19th century. UK slave traders supplied Africans to the plantations, with the profits and product going back to the Empire. 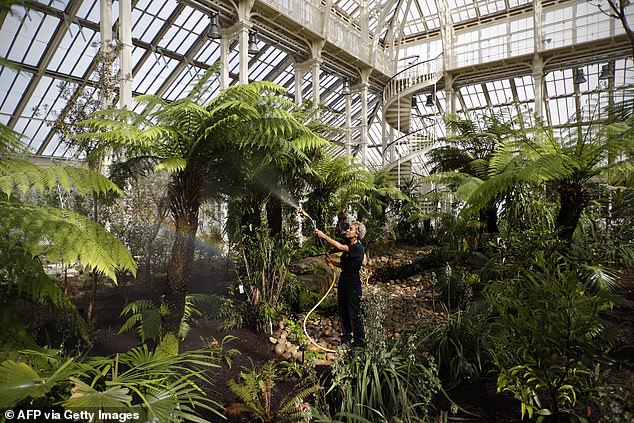 A horticulturist waters plants in the Temperate House at Kew Gardens in west London on May 3, 2018

A Kew spokesman said signs for the plant will be changed after consulting Ajay Chhabra, an actor with an insight into how sugar cane was linked to slavery.

The changes will then be carried over to other plants at Kew which has 50,000 species in total and normally attracts more then two million visitors to its sites in London and Sussex.

‘I recognise there is a lot to do.’ He has also said he is keen to diversify senior staff by providing more roles for ethnic minorities. It comes after Kew this week released a podcast about botany’s ‘hidden legacy of inequality’.