Jessica Rowe has paid tribute to the Good Samaritan bus driver who helped her and her daughter escape their burning car moments before it exploded in a fireball.

A passing school bus driver named Mev flagged them down to alert them of the danger and helped the pair escape from the vehicle and flee to safety just as the car burst into flames.

The pair luckily escaped uninjured but were traumatised by the ordeal.

Rowe hours later assured concerned fans she and Allegra were doing fine at home, and thanked Mev and all the others who helped them. 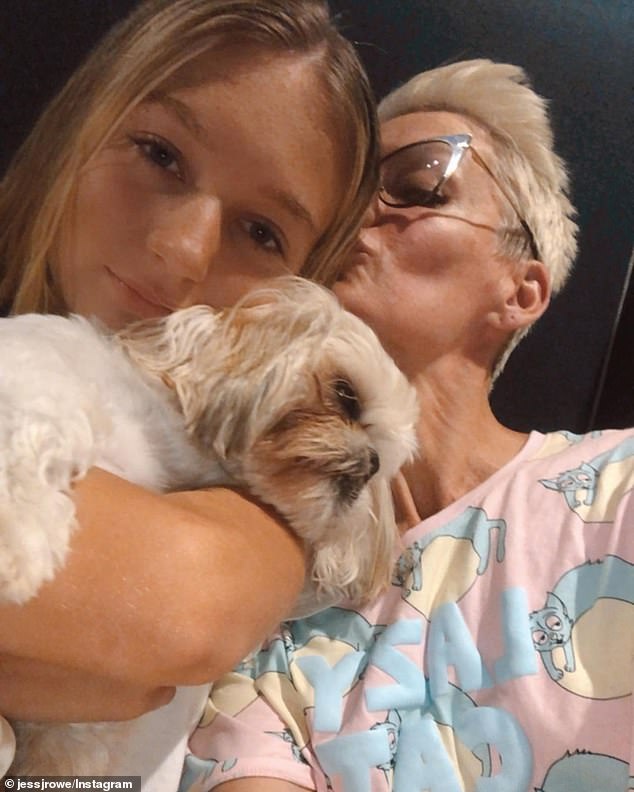 ‘We’re safe and sound! Thank you for all of your kindness and love,’ Rowe posted on Instagram late Thursday night.

‘Thank you to the thoughtful, fast thinking and kind school bus driver Mev who got us out of the car, called the fire brigade, cleared the road and then stayed to drive us home.

‘Thank you to the police and paramedics who are angels. And the tow truck driver! And the mums and dads who stopped to help. We love you.’

The post include a photo of Rowe dressed in pyjamas kissing Allegra as the teen cuddled the family dog Daphne.

She was flooded with messages from well-wishers.

Newsreader Chris Bath added: ‘Now that is a serious school pick up story. Lots of love to all. Glad you are OK. How good is Mev!’ 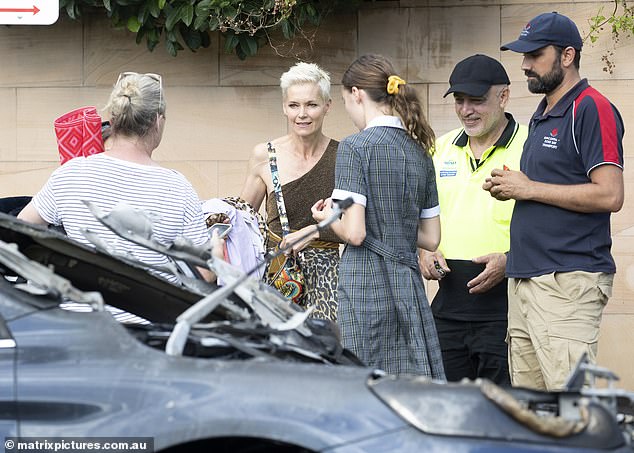 Photos from the scene show a distraught Rowe and her daughter at the scene before heading home.

The expensive car, valued at least $65,690 was destroyed by the inferno and later towed away.

Rowe and her family and friends hailed the bus driver Mev as a hero for alerting the family before the situation became more serious.

‘He got the everyone to move away from the footpath, directed traffic, rang the fire brigade and then drove them all home,’ Rowe’s manager David Wilson told the Wentworth Courier.

‘There’s no hospitalisation or anything like that involved, but both are really rattled as you would be.’

Mr Wilson later told news.com.au: ‘Jess was saying to me earlier that if the school bus driver hadn’t jumped out of his bus and run over to Jess’ car and told them to get out right now it could have been a much more serious outcome.’

‘The whole family is so very grateful to him for his quick action and courage. Approaching a car that was clearly in serious trouble meant he was also at risk of putting himself in harms way, and that’s amazing.’ 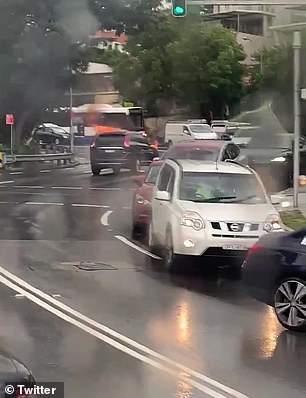 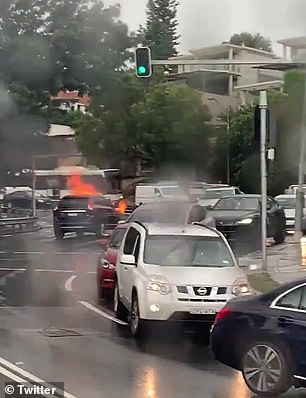 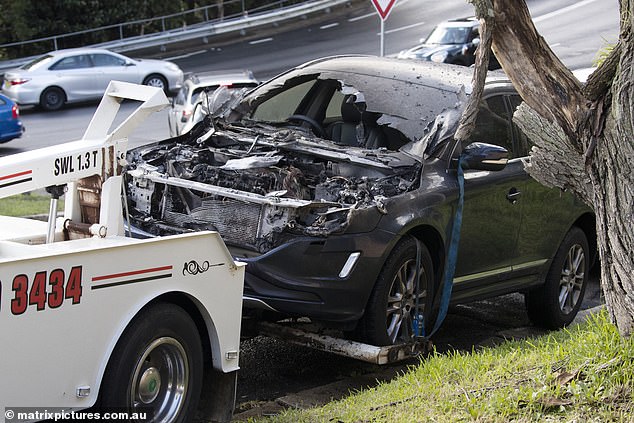 Rowe’s husband of 16 years, Channel Nine newsreader Peter Overton, was preparing to present the nightly bulletin when he got the call from a distressed Allegra and dashed home to be with his family.

‘Everyone at work could see that I was absolutely traumatised when I saw my 14-year-old on FaceTime absolutely inconsolable,’ he told 2GB radio on his way home to his family on Thursday night.

‘I saw in the background the car ablaze.

‘Fire and rescue, ambulance and police were there. They’re all OK and they’re home now. There was a real fear that the car could’ve exploded.

‘I want to point out, there’s a lot of heroes we’ve been talking about in the floods and I salute them but I salute that bloke this afternoon who got Allegra and Jessica out and alerted them that smoke was coming out and that they had to get out of the car.’ 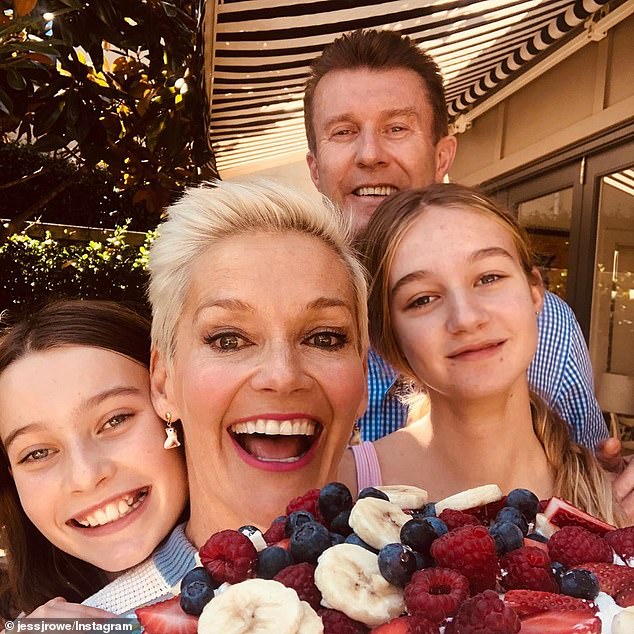 He understands the good Samaritan was driving a local school bus at the time.

‘This bloke was fantastic. My greatest concern is that the car could have exploded, which happened outside a school,’ Overton said.

‘I’ll make sure we find out his name and make contact with him. I’ll be thankful to him when I meet him and I will.’

Overton said the cause of the blaze is still unknown.

‘When Allegra rang me, just to see her absolute state of despair, that’s why I can’t wait to see her. I don’t care about the car,’ he said.