Stunning mountainous European landscapes tend not to be associated with Germany – but these jaw-dropping photographs might help to change that.

The amazing images have been snapped by photographer Christine Madeux, an American living in Garmisch-Partenkirchen, south of Munich, with her husband Scott. She says the Bavarian Alps has ‘no shortage of hidden gems to explore’.

Christine, who is also full-time wedding photographer, told MailOnline Travel: ‘I think a lot of people imagine visiting Switzerland or France when they picture a trip to the Alps, but Germany is absolutely stunning too.

‘Something that makes the German Alps really stand out is that it is so green here. The mountains are full of high alpine meadows that stay blooming with wildflowers for a solid three months of the summertime. There’s also plenty of craggy peaks too though and the contrast between lush fields and tall, rocky summits is really spectacular.’

Scroll down and behold the beautiful Bavarian landscape… 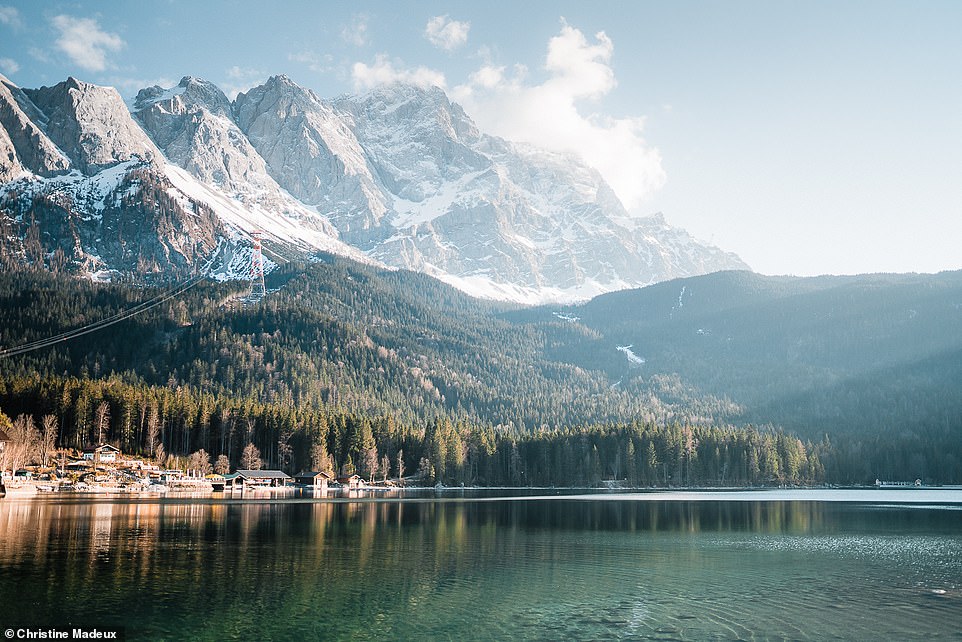 This breathtaking image shows a spring evening at Eibsee, a crystal-clear lake in Garmisch-Patenkirchen, around an hour south of Munich. The lake sits at the foot of Zugspitze – Germany’s highest mountain at 9,718ft (2,962m) 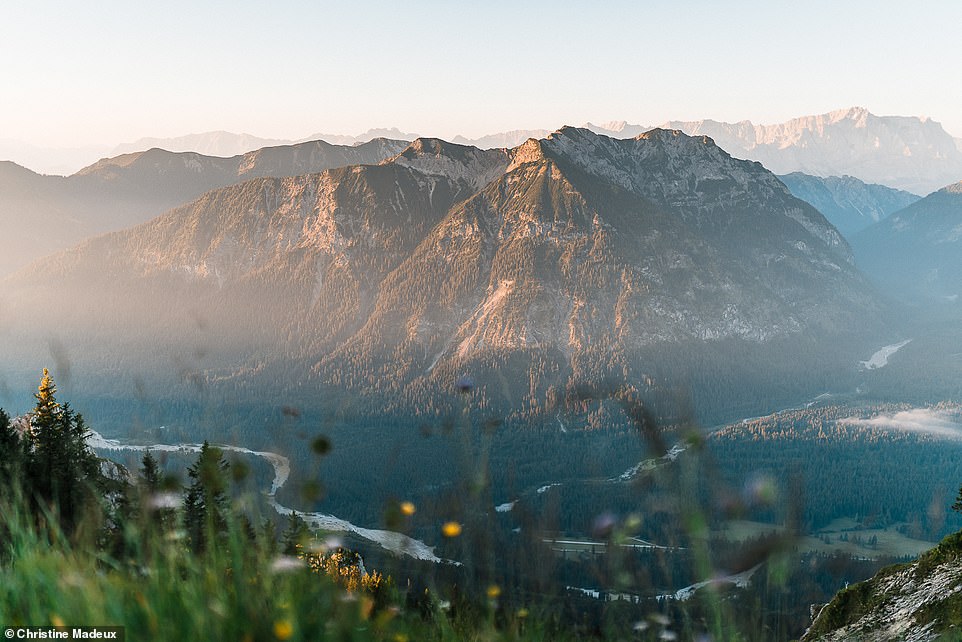 A stunning shot taken by Christine at sunrise above the Ammer Valley in the Ammergau Alps, a mountain range in the Bavarian Alps that runs through Bavaria and into Tyrol in Austria 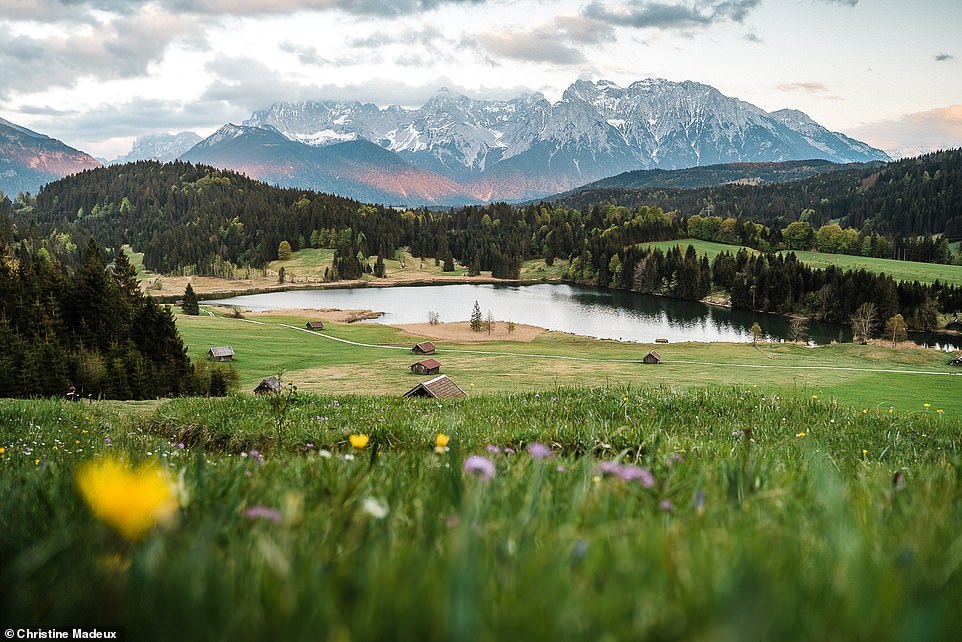 Christine says: ‘Something that makes the German Alps really stand out is that it is so green. The mountains are full of high alpine meadows that stay blooming with wildflowers for a solid three months of the summertime.’ Pictured is a spring sunset at the Geroldsee lake, which lies between the towns of Garmisch-Partenkirchen and Mittenwald. In the background is the Karwendel Mountains. The range spans Bavaria and Tyrol in Austria 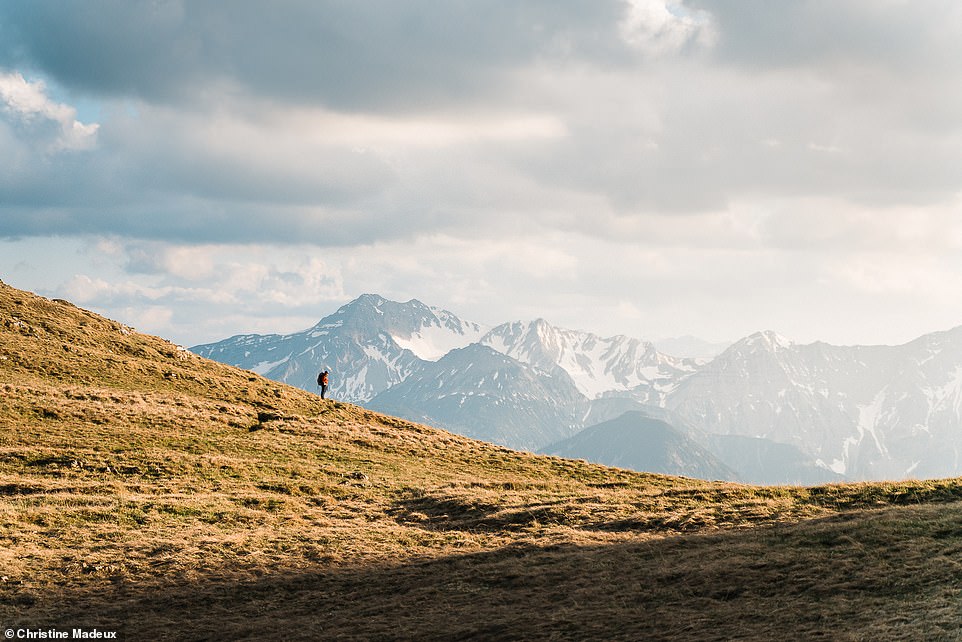 A breathtaking image of the Ammergau Alps with its largest mountain, the Daniel (7,677ft/2,340m), which actually sits in Austria, in the background. Christine snapped this photo while hiking with her husband Scott on the German/Austrian border near Garmisch-Partenkirchen 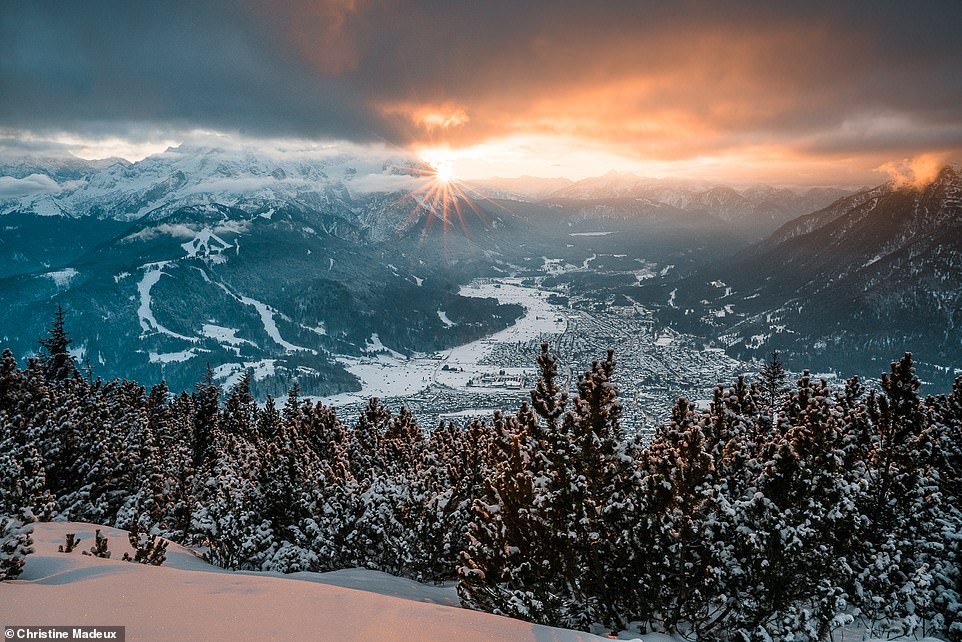 The last rays of sun peek from behind the Zugspitze mountain on to the town of Garmisch-Parternkirchen. Christine says: ‘I think a lot of people imagine visiting Switzerland or France when they picture a trip to the Alps, but Germany is absolutely stunning too’ 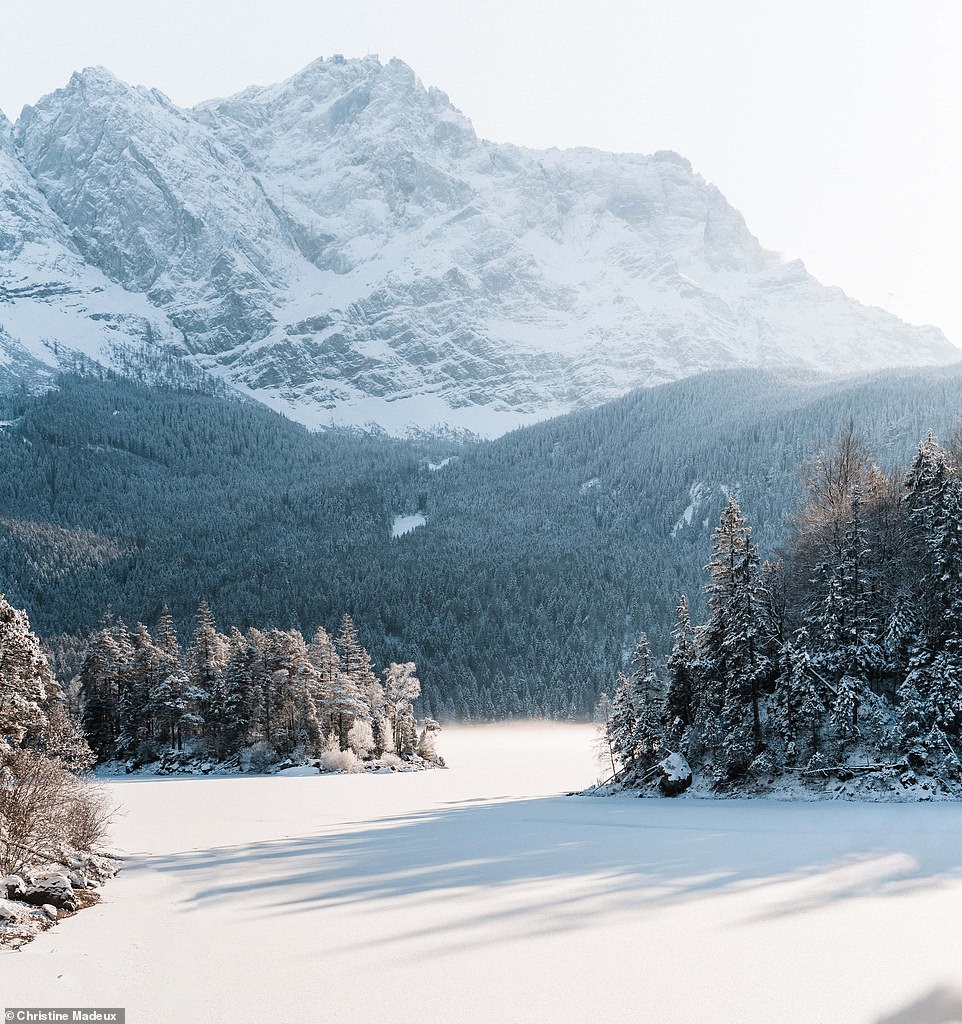 On a clear day, those who reach the summit of Zugspitze, pictured, are rewarded with views of four countries – Germany, Austria, Switzerland and Italy 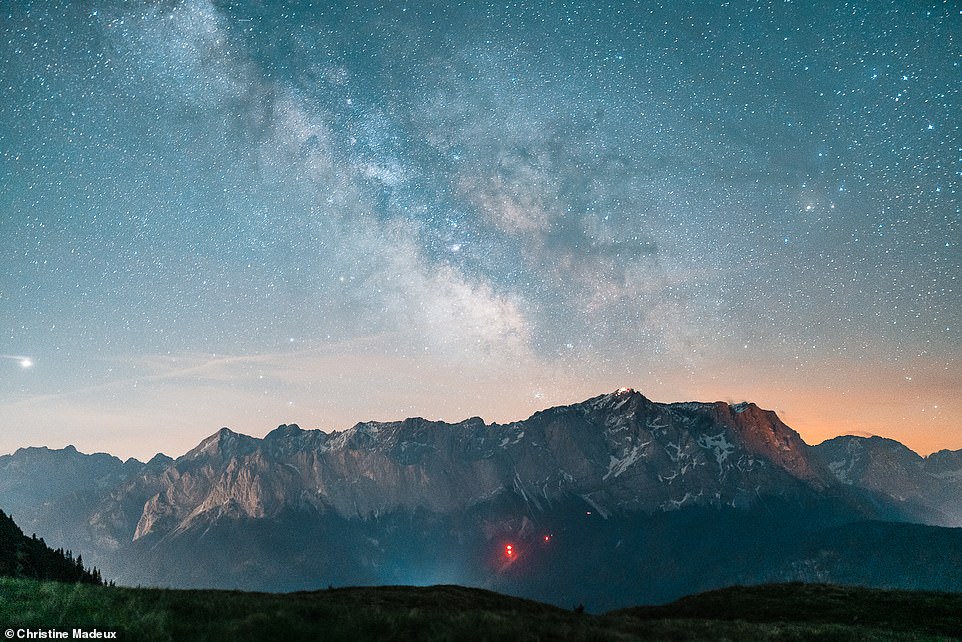 The Milky Way shines above the Zugspitze on a late spring night. A cable car can take visitors from Eibsee, the lake at the foot of the mountain, to the peak of the mountain in around 10 minutes 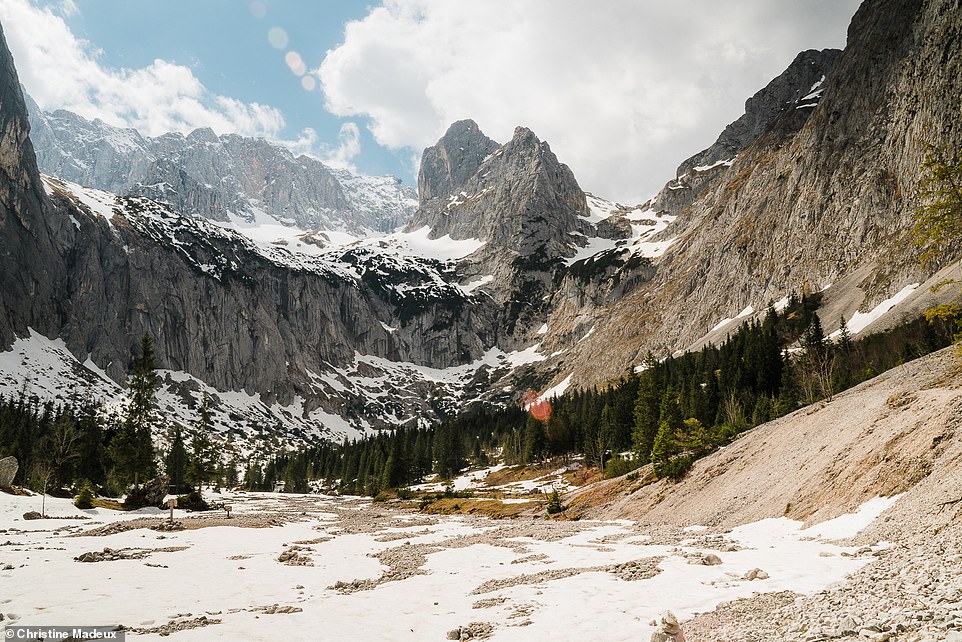 This spectacular shot shows the incredible view from the Hollentalangerhutte, a popular shelter for hikers next to the Zugspitze. Christine says many stop off at it before heading for the summit 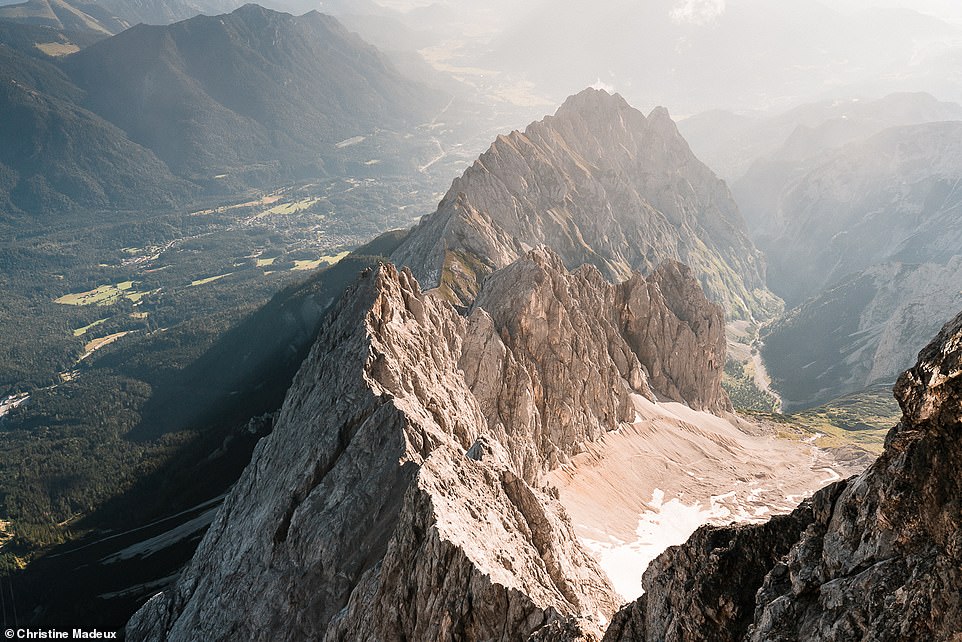 An amazing shot taken from the summit of Zugspitze looking down on the town of Garmisch-Partenkirchen. In 2020, Christine and Scott reached the peak of more than 50 different mountains in the Alps, the majority of them in Bavaria 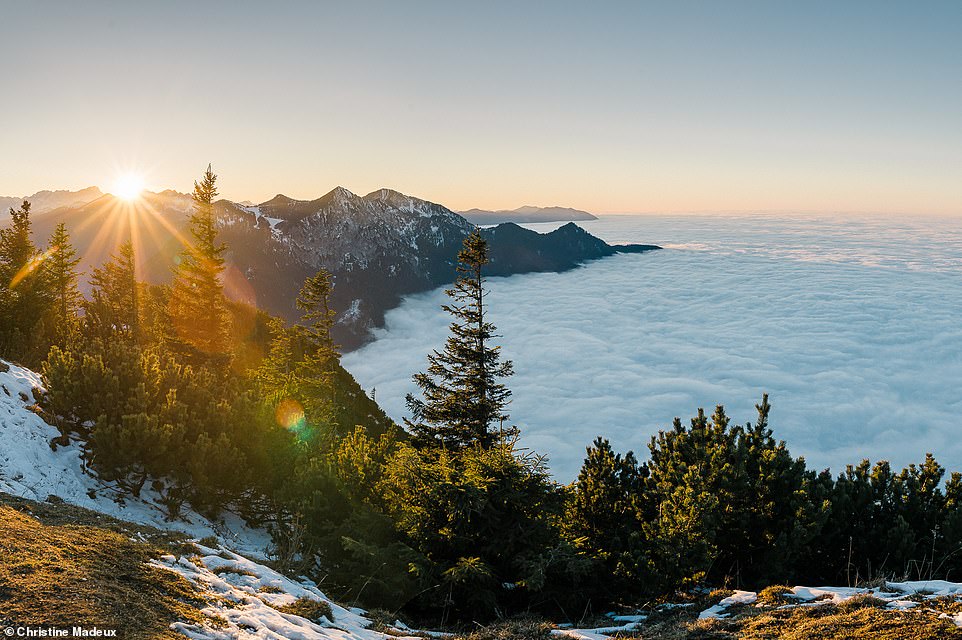 A mesmerising cloud inversion near Walchensee – one of the largest Alpine lakes in Germany at 6.3 square miles – which is nestled close to the town of Kochel am See. Inversions occur when cold, moist air is trapped below warm, dry air, causing low-level clouds 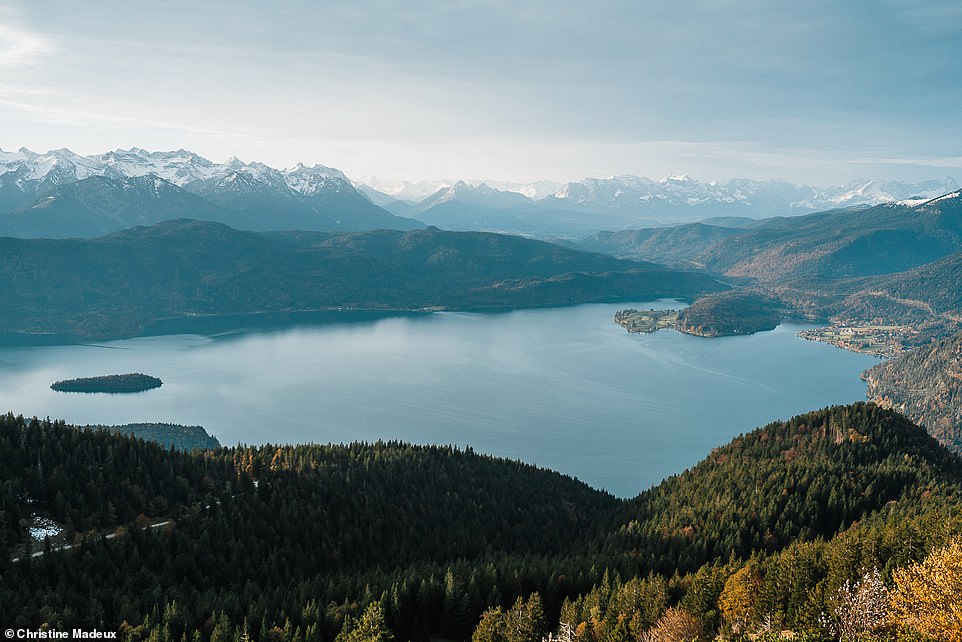 A clearer view of Walchensee lake pictured at first light. On the left of the image is the lake’s heart-shaped forested island 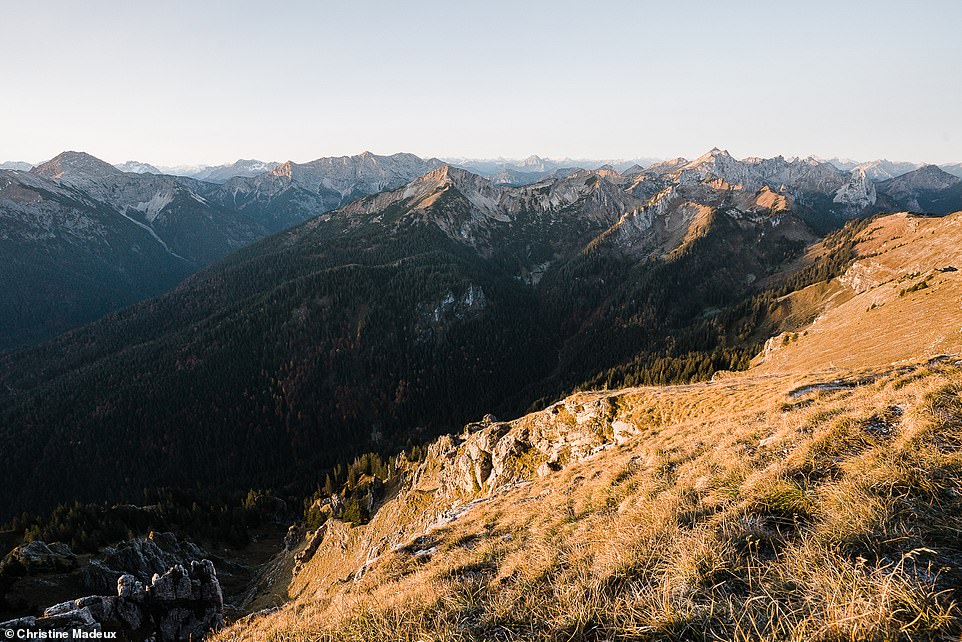 To take her stunning images, Christine often hikes with Scott very early in the morning or late into the night. This beautiful shot was taken at sunrise and shows the view into Austria from the 6,321ft (1,924m) high Grosse Klammspitze mountain, which lies in the Ammergau Alps 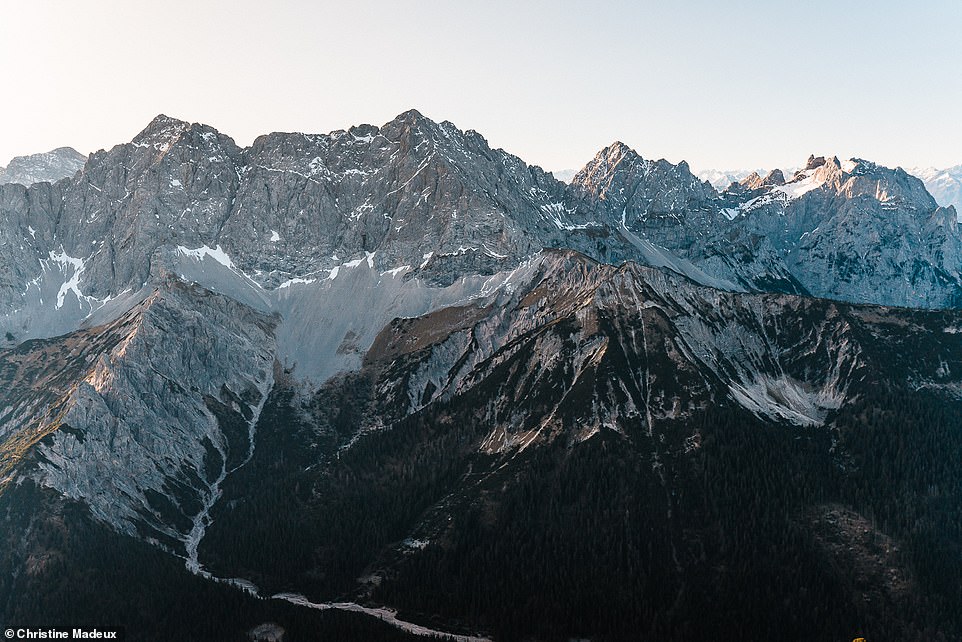 Christine says that the contrast between lush fields and tall, rocky summits in the German landscape is ‘really spectacular’. Pictured is an epic part of the Karwendel Mountains. The highest peak in this range is the Birkkarspitze (9.019ft/2,749m) – located across the border in Austria 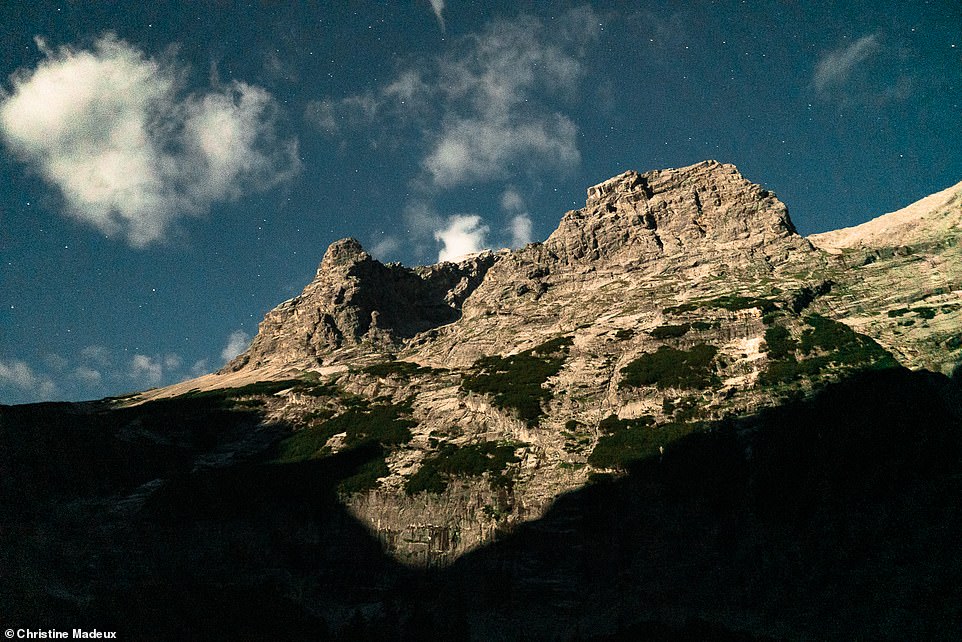 An incredible image showing a starry night sky above the Reintal, also known as the Rein Valley, close to Zugspitze. During the summer months, Christine says she and her husband find themselves out on hiking trails four to five days a week 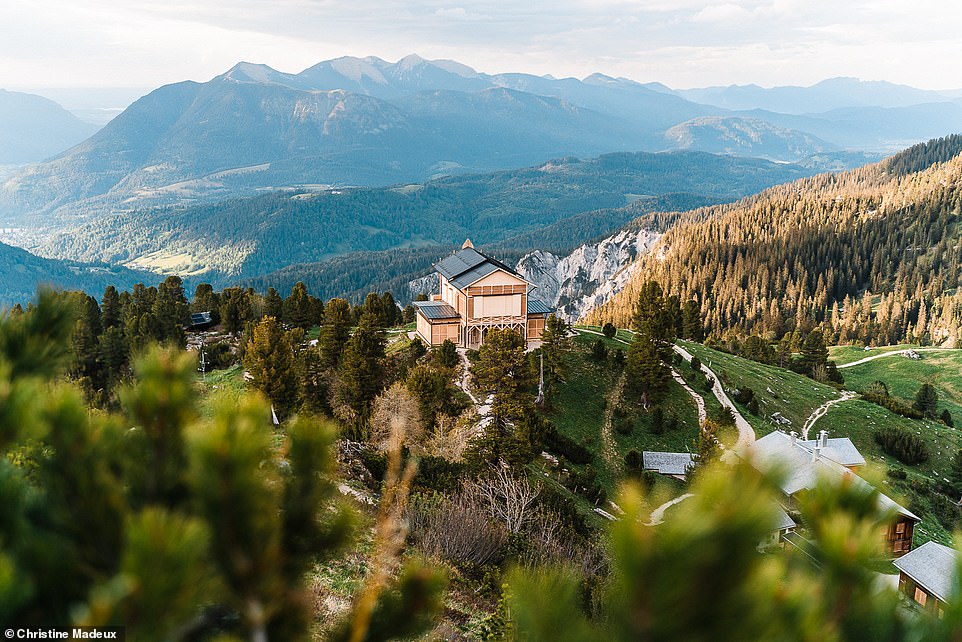 The picturesque Konigshaus am Schachen, a villa in the Wetterstein mountains in the Bavarian Alps, near Garmisch-Partenkirchen. It was built by Ludwig II, the king of Bavaria, between 1869 and 1872 and sits at an altitude of 6,122ft (1,866m). It is only accessible by foot and is usually open for hikers to visit in the summer months 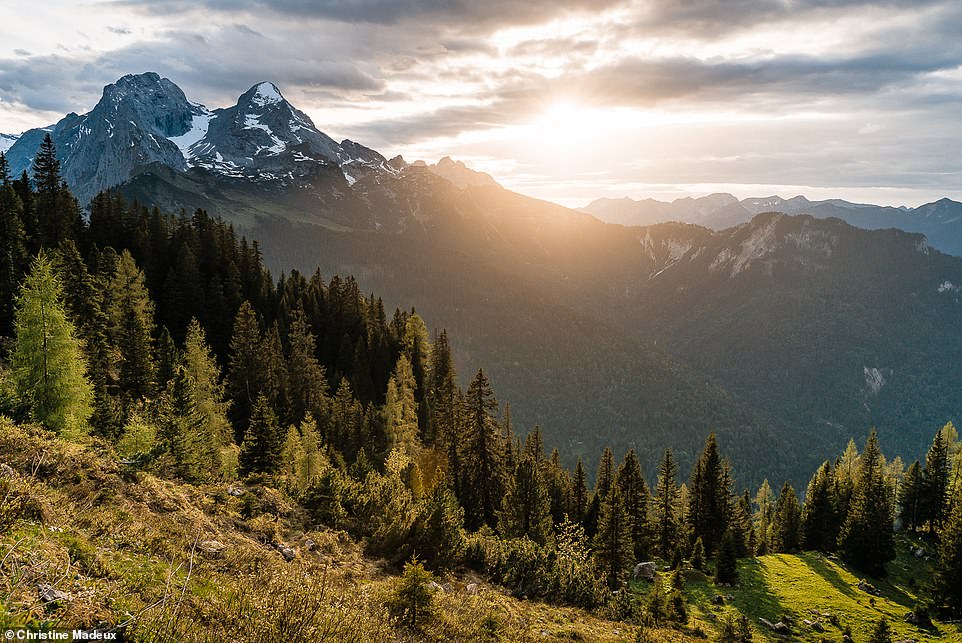 The mighty Alpspitze, pictured, is an 8,622ft (2,628m) peak in the Wetterstein Mountains in Garmisch-Partenkirchen. Christine says: ‘For anyone thinking about coming to Germany post-lockdown, just do it!’ 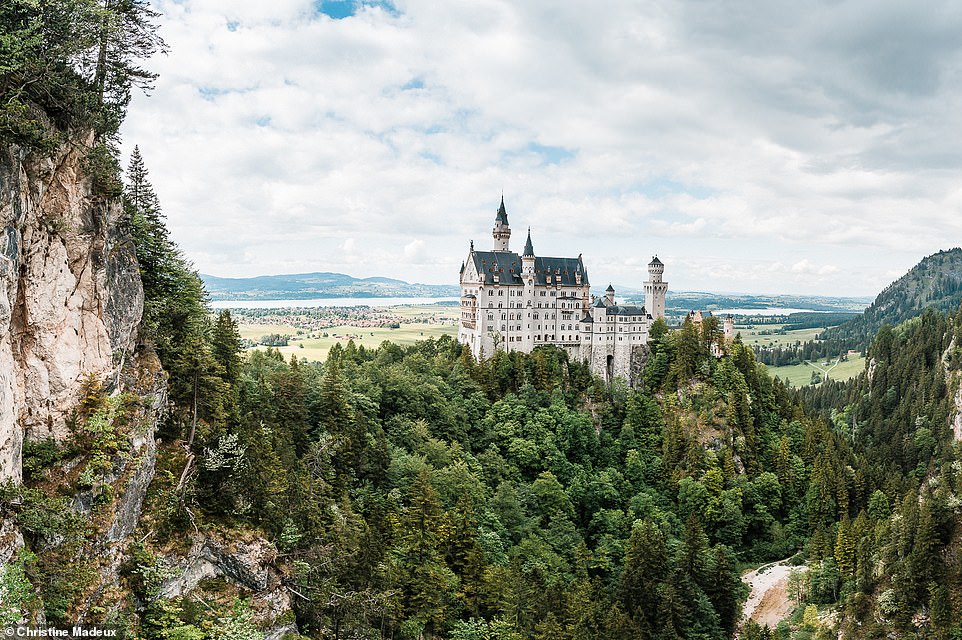 This amazing image shows the famous Schloss Neuschwanstein – a 19th-century castle built by Ludwig II near the village of Schwangau. It is said to be the main inspiration for the design of Disney’s Cinderella’s Castle. According to the castle’s website, ‘every year 1.4million people visit “the castle of the fairy-tale king”‘ 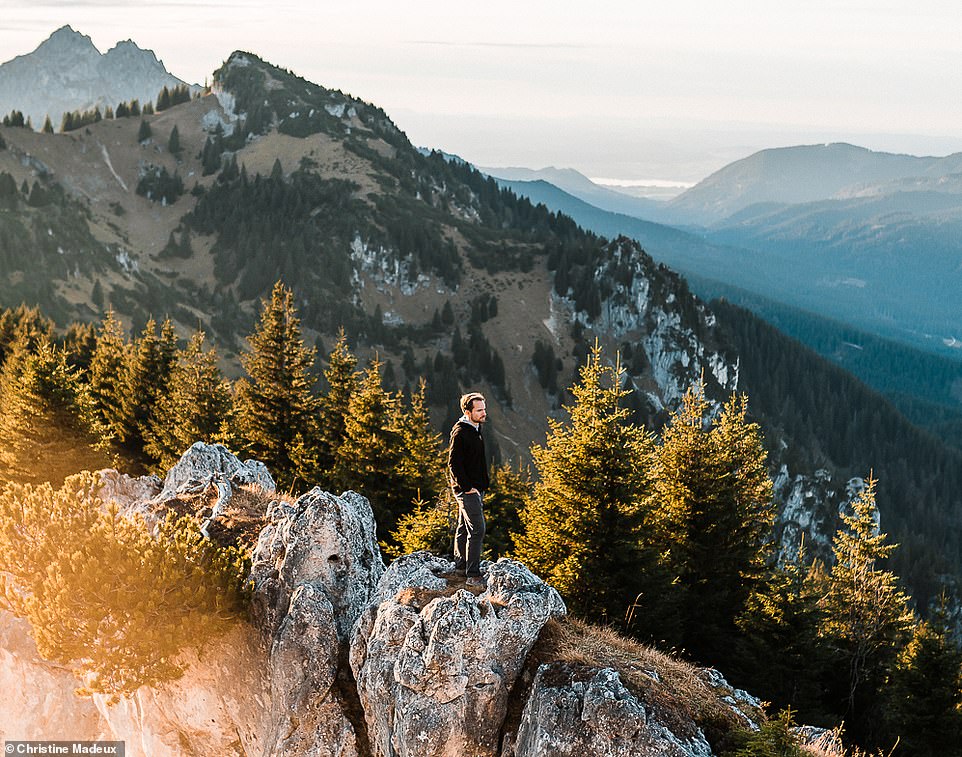 Christine’s husband, Scott, hikes along a ridge in the Ammergau Alps. Christine says: ‘My husband and I love exploring the Ammergau Alps, a small range located right where we live. There are endless trails to hike ranging from easy walks to more difficult scrambles just ten minutes from our door’ 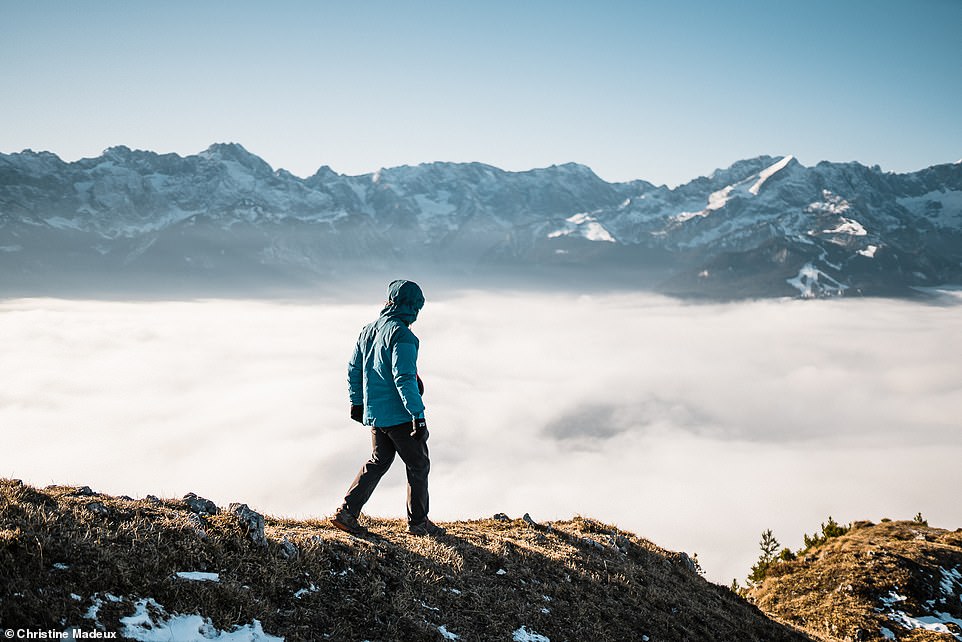 The incredible view of a cloud inversion taken from Mount Wank (yes, really) – a 5,840ft (1,780m) high peak in the Ester Mountains, a small range in the Bavarian Alps 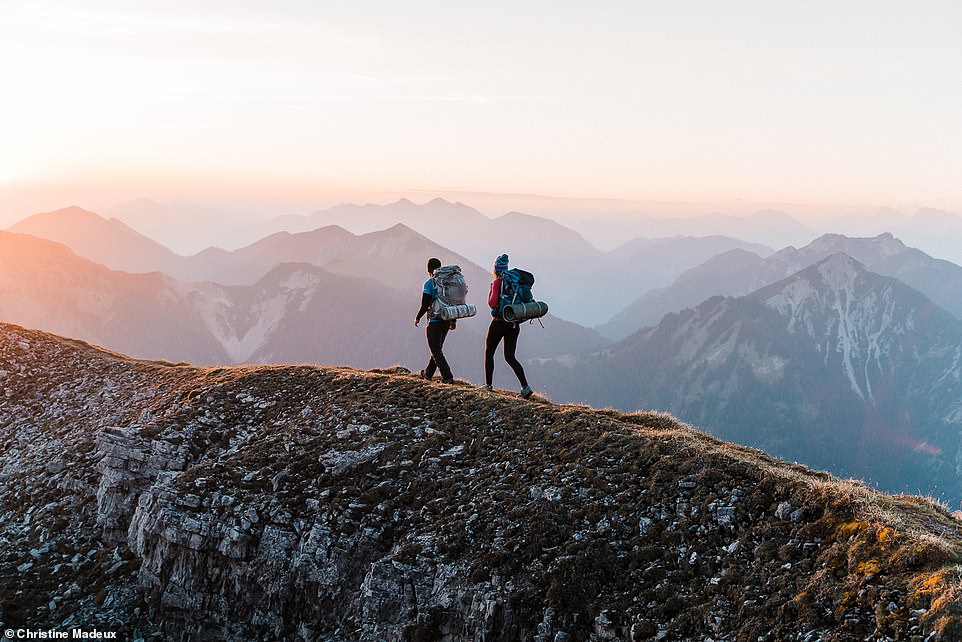 Christine and Scott hiking along a ridge in the Ammergau Alps at sunrise. Christine was able to snap the jaw-dropping picture using a tripod and a self-timer on her camera. She explained: ‘It was a really surreal morning watching the mountains bathed in blue, purple, and then an orange glow as the sun came up’ 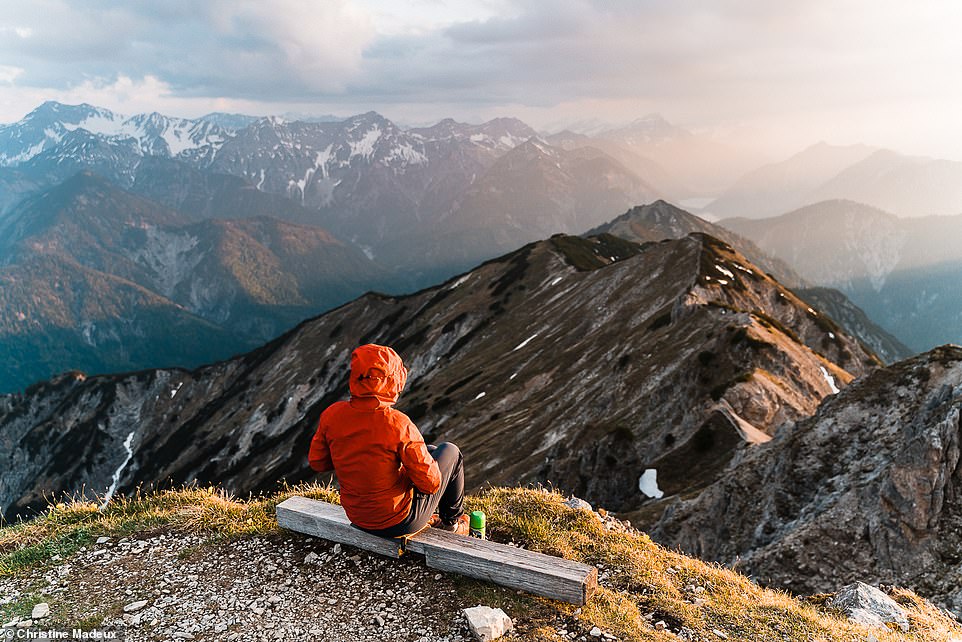 Scott watches a stunning sunset from a peak in the breathtaking Ammergau Alps. Christine says she and her husband have ‘been able to find a lot of solitude throughout these mountains’ 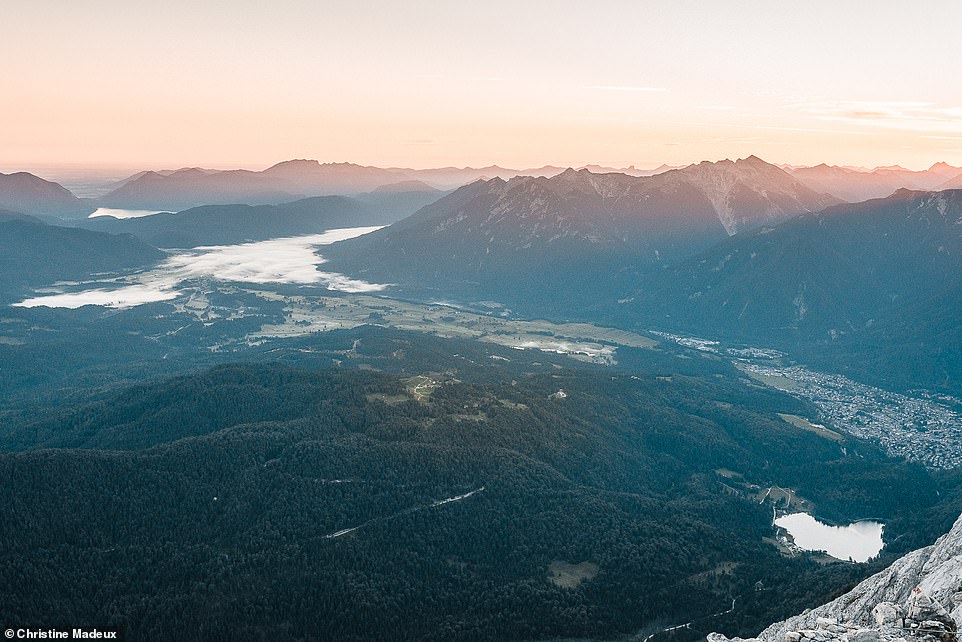 This serene sunrise scene was captured by Christine from the summit of Obere Wettersteinspitze, a 4,429ft (1,350m) peak that towers over the town of Mittenwald in the very south of Germany. The town is famous for its violin-making heritage – the instruments have been manufactured there since the 17th century 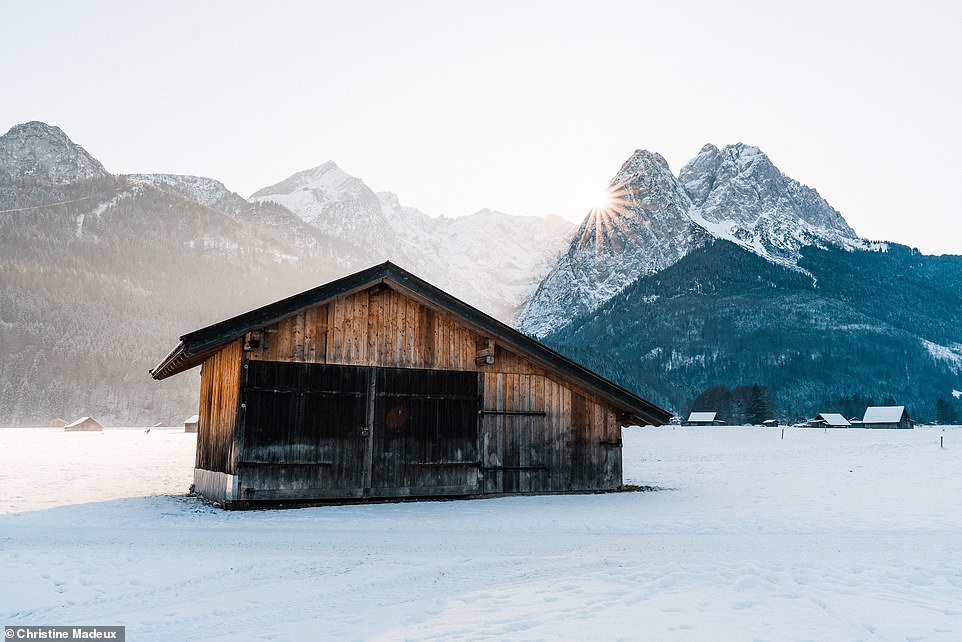 Christine says that the valleys among the Bavarian Alps are dotted with these huts, known in German as Heustadel, which were traditionally used to store hay. This is one of many located in Garmisch-Partenkirchen 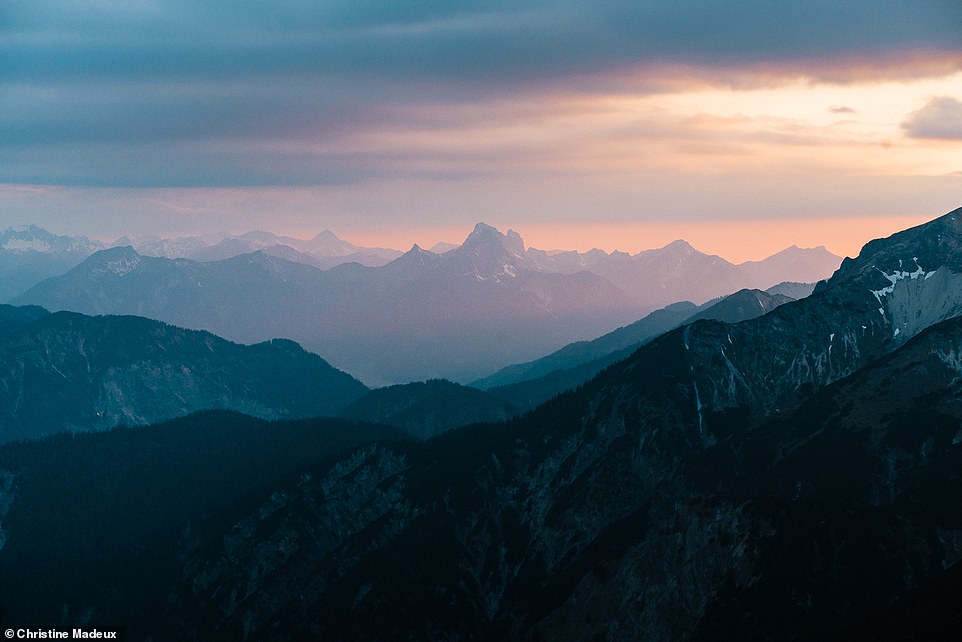 This mesmerising shot of a purple-hued sunset shows the view from a ridge in the Ammergau Alps, just outside of Garmisch-Partenkirchen, towards Reutte, a market town across the border in Austria 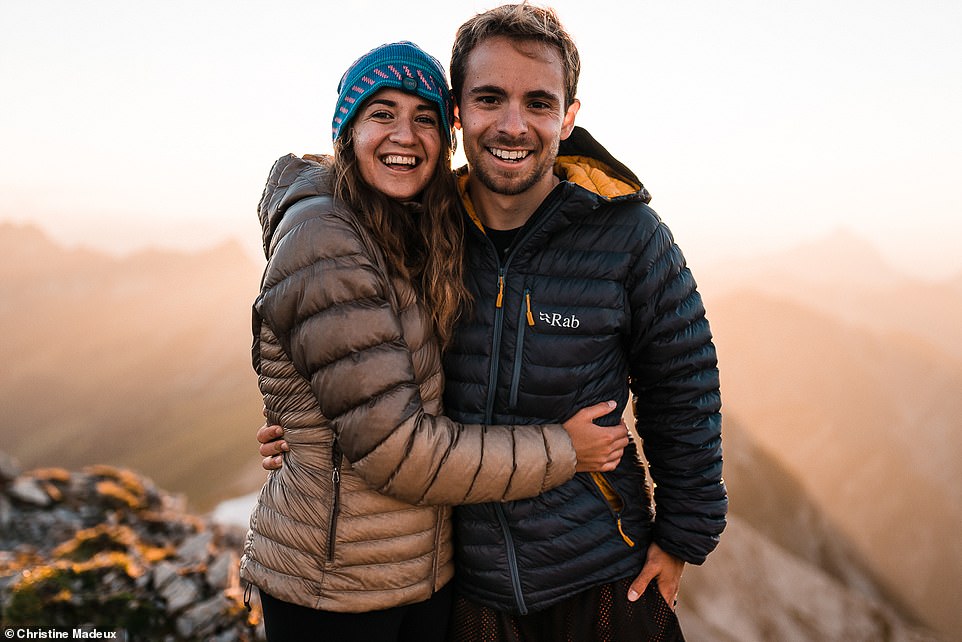 Photographer Christine and her husband Scott. The pair are both from the United States but moved to Garmisch-Partenkirchen in Bavaria in 2019