It’s a long way from Tipperary! Irish brothers are worth £16 billion as value of their fintech giant soars

Two Irish brothers have seen their fortune soar above £16billion after their fintech company Stripe was valued at £69billion.

Those stakes are now worth £8.3billion – or £16.6billion combined – following a funding round that made Stripe the most valuable private company in Silicon Valley. 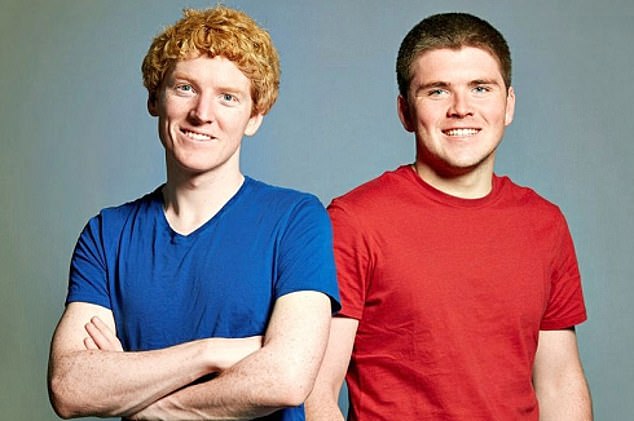 It is a remarkable rise for the brothers who were born and raised in Tipperary by their father Denis, an engineer who ran a lakeside hotel, and microbiologist mother Lily.

Stripe builds software so businesses can process payments online. It has some notable names on its board, including former Bank of England governor Mark Carney and Christa Davies, chief financial officer at services giant Aon, who both joined earlier this year.

The firm has no plans to go public but a listing would thrust the two already very rich young men into the spotlight.

Both showed early signs that they would grow up to be tech pioneers and by eight years of age Patrick had taken his first computer course at the University of Limerick.

He later attended Massachusetts Institute of Technology, but dropped out, while John attended Harvard.

Before Stripe, they founded Shuppa, which was sold in 2008, making them millionaires at just 19 and 17.

Two years later they launched Stripe with investment from PayPal co-founders Elon Musk and Peter Thiel and by 2016 they were the world’s youngest self-made billionaires.

But there are some sceptics, especially as Stripe has yet to show its revenues or profits and has refused to open its books.

Based in San Francisco, the company also has offices in Dublin. The money from the funding round will be used to hire 1,000 more people for the Dublin office and expand further into Europe.