The controversial murder trial concerning a notorious IRA commander shot dead as he ran away from arrest has relived the moment a policeman spotted the ‘three star suspect on the Army wanted list’ and tried to detain him, yelling ‘halt, halt’.

Joe McCann – said to have been responsible for the death of 15 British soldiers himself – was clocked by an RUC Special Branch officer shortly before the shooting in April, 1972.

The policeman identified the well-known republican paramilitary – who had been wanted at the time – and went to a checkpoint manned by paratroopers to get help.

Moments later he encountered Mr McCann and told him ‘take your hands out of your pockets’.

But a brief scuffle ensued and he fled the scene, before the soldier defendants – who cannot be named for legal reasons – opened fire and killed him.

A statement from the officer revealed he had ‘darted from side to side’ as he had fled.

It was disclosed in the ongoing case in Belfast over the shooting over Mr McCann nearly 50 years ago, that has seen two veteran former Paratroopers in their seventies in the dock.

Proceedings against the pair – who both deny murder – are happening in a juryless court amid claims the historic cases are politically motivated to appease Sinn Fein. 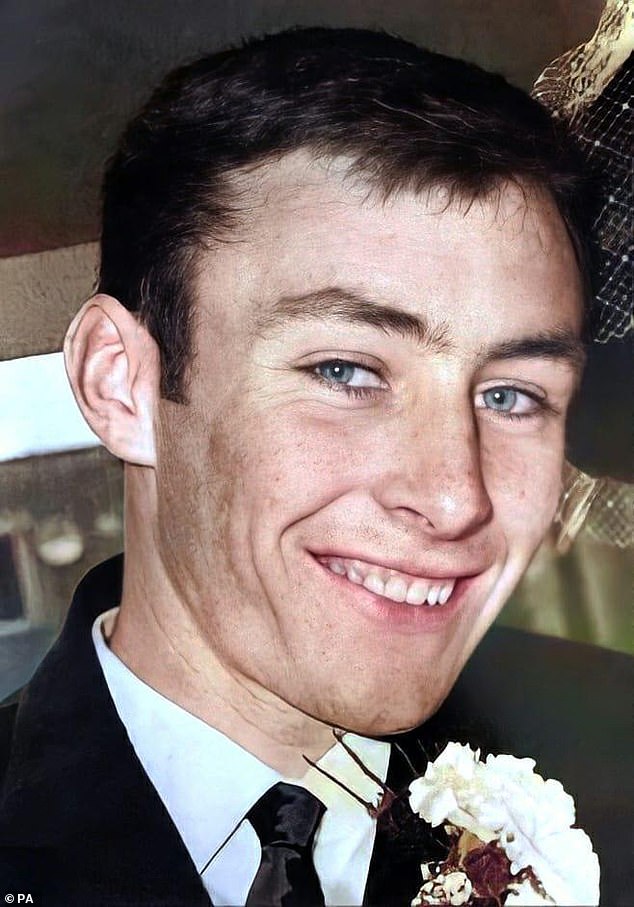 The prosecutor, who is also unnamed, told judge Mr Justice O’Hara: ‘The officer is unidentified as to the investigation into this matter.’

The judge, who initially asked if the officer was now dead, replied: ‘How do we know anything about the truth of this statement if we don’t know who the person making it is.’

But the Crown lawyer said the statement had a provenance and had been located in original case files that were re-examined by the police’s historical inquiries team in 2010.

He said a ‘gateway’ had been established to admit it as hearsay evidence to the trial with the agreement of both the defence and prosecution. 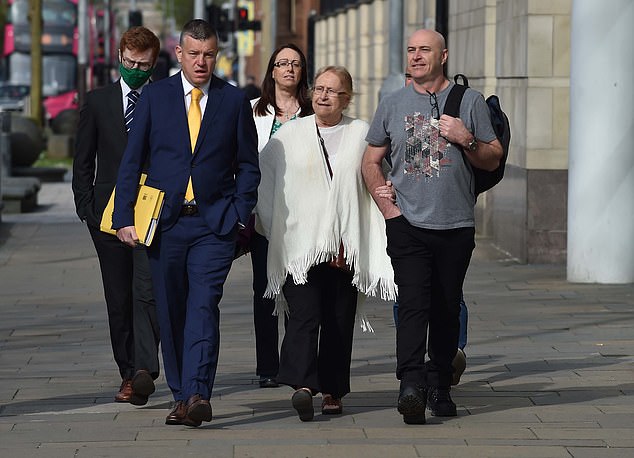 Dec 3, 1965 – Convicted of possessing Army bayonets and being an IRA member and was sentenced to a year in prison.

March 9, 1971 – Reports he was involved in the murder of Provisional IRA member Charlie Hughes.

June 28, 1971 – Convicted of breach of the peace at an IRA funeral and is sentenced to six months, but absconds on bail.

August 10, 1971 –  Involved in a bakery siege and subsequent firefight.

September 21, 1971 – He is implicated in the attempted murder of four police officers.

February 22, 1972 – Took part in the bombing of Parachute Regiment headquarters in Hampshire that killed seven civilians.

April 15, 1972 – He is shot dead in the Markets area of Belfast. The Official IRA say he was responsible for killing 15 British soldiers.

The statement was then read into the court record by the Crown lawyer.

In it the officer described how he had tried to detain Mr McCann, whom he described as being a ‘three star suspect on the Army wanted list’, on the junction of Joy Street and Little May Street.

‘I said ‘Joe McCann, I’m a police officer, take your hands out of your pockets’,’ read the statement.

‘The subject pushed hard against me and ran down Joy Street.’

The officer said Mr McCann ‘darted from side to side’ as he ran away.

The officer said he dropped to the ground and called ‘halt, halt’.

He said he heard similar calls from behind him, where the soldiers were positioned.

The officer said he then heard gunfire and saw Mr McCann fall to the ground.

In the statement, the officer said, upon witnessing Mr McCann fall, he returned to his police vehicle.

He said he did not fire his pistol during the incident.

After the statement was read, the trial moved into a separate process to determine the admissibility of statements provided by the defendants.

The Crown and defence raised no objection to those legal exchanges, which are anticipated to last a number of days, being reported.

McCann, who was known as the ‘Officer Commanding of the 1st Battalion of the Official IRA’ and a member of the IRA Army Council, was at the time of his death suspected of the murder of two soldiers, including Corporal Robert Bankier, one of the first killed during the Troubles.

He was also wanted for the attempted murder of four policemen and suspected of being involved in the attempted assassination of the then home affairs minister Lord Kilclooney, facts agreed between the prosecution and defence in the case revealed. 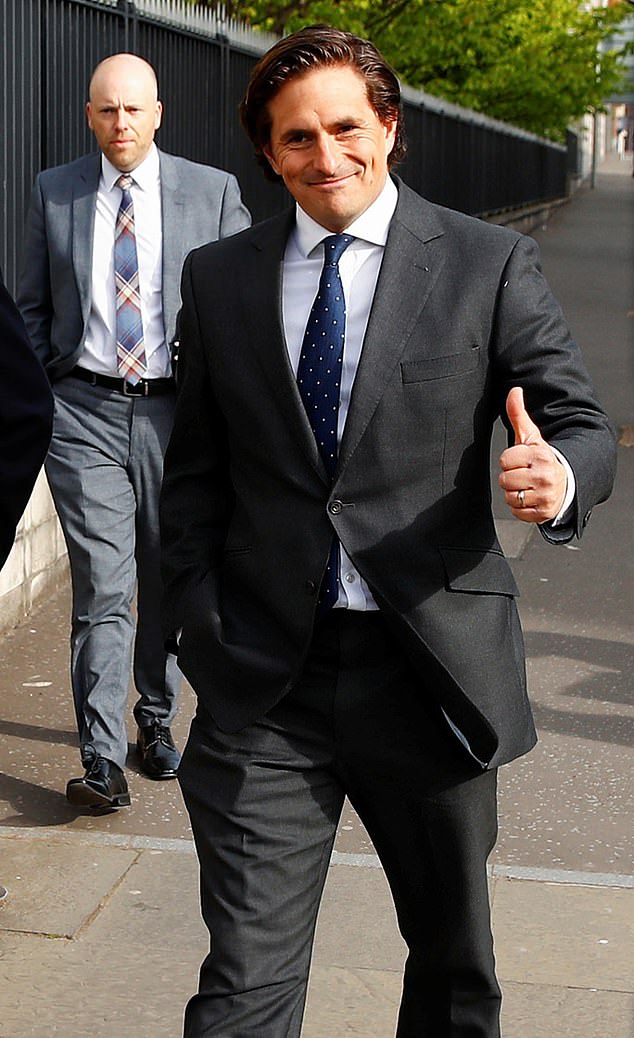 MP Jonny Mercer is also attending the trial, which is being heard by a judge with no jury

Why is this a No Jury Trial? Northern Ireland and the reason for NJTs

Unusually the case is being heard by a judge with no jury.

It came after the Director of Public Prosecutions issued a certificate for a non-jury trial.

Trials by judges alone are only usually held when there is a fear that a jury could be tampered with in cases concerning paramilitary organisations.

In this case, the two defendants had begun processes to challenge the decision, but abandoned the procedure.

Their lawyers had originally claimed the no-jury decision was wrongly based on the 2007 Justice and Security (Northern Ireland) Act.

Previous to 2007 the ‘Diplock system’ let NJTs carry on because the terrorist intimidation of jurors in Northern Ireland was an obstacle to dealing effectively with terrorist crime in the courts.

Now the Act gives statutory provisions that allow no jury if is is ‘deemed necessary for a small number of exceptional cases’ where the jurors could impair justice.

The most recent figures on record show during 2019, 14 non-jury trials took place in Northern Ireland.

The court heard that reports had linked the father of four to a bomb attack at the Parachute Regiment headquarters in Aldershot in February 1972 which killed seven civilians.

They are also the first ex-servicemen to face charges relating to the death of an active member of the IRA.

Both men, alongside a third soldier who has since died, are said to have fired at McCann as he ran away on April 15, 1972, having been called by a police officer to assist in his arrest. McCann sustained three bullet wounds but was found to be unarmed.

The prosecution say the shooting was unlawful and amounts to murder because ‘it was not justified to effect an arrest’ and ‘the level of force used was unreasonable’.

The Crown alleges that both soldiers are responsible for the murder, regardless of who fired the fatal shot. Soldiers A and C pleaded not guilty from the box usually reserved for the jury before proceedings commenced.

The case is being tried by Mr Justice John O’Hara, sitting alone, under Diplock rules introduced during the Troubles to avoid jury tampering. Flanked by two security officers, the veterans sat quietly, with Soldier A admitting that he was ‘lip-reading’ the proceedings owing to poor hearing.

From the gallery, the family of McCann, including his widow Anne and daughter Nuala, came face-to-face with those allegedly responsible for his death for the first time in 50 years.

Sacked veterans minister Johnny Mercer who last week blasted the Government for ‘abandoning’ Northern Ireland veterans, sat just feet away, offering a thumbs-up to the two soldiers during a break. 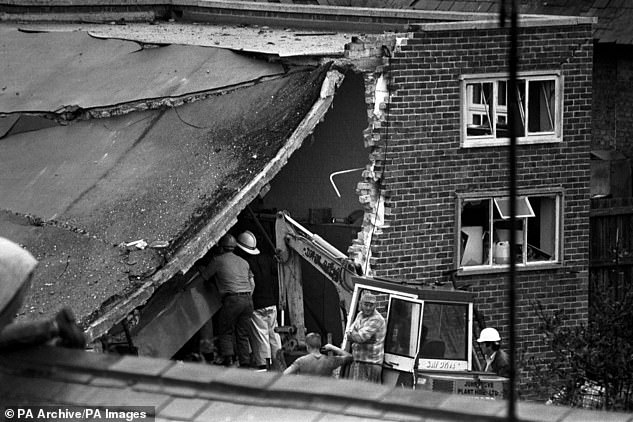 Attempts are made to shore up a collapsed roof at the Royal Marines School of Music in Walmer, Kent, after an IRA bomb tore apart the recreation centre, killing 11 people 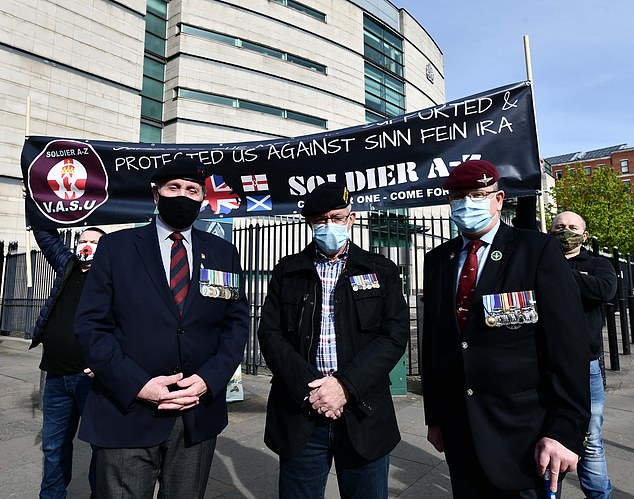 What is the timeline of the Northern Ireland troubles and peace process?

The Stormont Government is dissolved and direct rule imposed by London

Bobby Sands, a republicans on hunger strike in the Maze prison, is elected to Parliament. He dies a month later

An IRA bomb explodes at the Grand Hotel in Brighton, where Margaret Thatcher is staying during the Tory Party conference

Margaret Thatcher and then Sir John Major set up a secret back channel with the IRA to start peace talks. The communications was so secret most ministers did not know about it.

Tony Blair helps to broker the Good Friday Agreement, which is hailed as the end of the Troubles.

It establishes the Northern Ireland Assembly with David Trimble as its first minister.

The Queen and Prince Philip make a state visit to Ireland, the first since the 1911 tour by George V.

In a hugely symbolic moment, the Queen is pictured shaking hands with Martin McGuinness – a former IRA leader.

Outside court he chatted to veterans, but denied ‘interfering’ in the judicial process.

However, he added: ‘What is happening today is not fair. We have two individuals in court for something [that happened] 50 years ago. They served their country, they did their best.’

The court heard that police held a large amount of information on McCann at the time of his death.

As well as suspicion of his involvement in a number of murders, he was known as a ‘well-skilled gunman’.

Former veterans minister Johnny Mercer who last week blasted the Government for ‘abandoning’ Northern Ireland veterans, sat just feet away, offering a thumbs-up to the two soldiers during a break.

Outside court he chatted to veterans, but denied ‘interfering’ in the judicial process.

However, he added: ‘What is happening today is not fair. We have two individuals in court for something [that happened] 50 years ago. They served their country, they did their best.’

The court heard that police held a large amount of information on McCann at the time of his death. As well as suspicion of his involvement in a number of murders, he was known as a ‘well-skilled gunman’.

According to the evidence provided at the time by the Special Branch officer who tried to arrest McCann, the republican was ‘at the very top of the three-star list of people wanted for arrest’.

After his death, the Official IRA claimed that he was responsible for the deaths of 15 British soldiers, the court heard.

Witnesses attested to seeing the shooting and the immediate aftermath.

Joseph Donaldson – just ten at the time and now 59 – said he and a friend cycled towards the sound of ‘high-velocity shots’ to ‘see what was going on’.

He said: ‘I saw a body on the corner of Joy Street. I saw a soldier with a black cap turn him on his back. The man wasn’t moving.’

When Soldier A went to check on McCann, he is said to have told him as he lay dying: ‘You have got me cold. I have no weapon.’

The prosecution and defence agree that McCann was regarded by the security forces as someone ‘who would be armed and would not hesitate to use his weapon to resist arrest’.

In statements they gave in 2010, both soldiers insisted they used ‘reasonable force in all circumstances’.

A lawyer for Soldier A yesterday argued that McCann was suspected of involvement in murders and could have committed more if he had evaded arrest.