Sisters Viktoria and Diana Petrova are the lucky ones that escaped the bloodshed and made it into Poland – but it was an arduous journey to safety.

They spent the first night of Vladimir Putin’s bombardment sleeping rough with their family in a car park in Kyiv.

But last night the teenagers and their mother, Elena, 46, took shelter at one of the nine centres that have been set up by Polish officials for Ukrainians fleeing the bloodshed. The centre is in Korczowa, which is close to the border between Poland and Ukraine.

‘It wasn’t safe to sleep in the basement,’ the visibly exhausted 19-year-old Viktoria said. ‘The only alternative was the metro but there was no space.’ 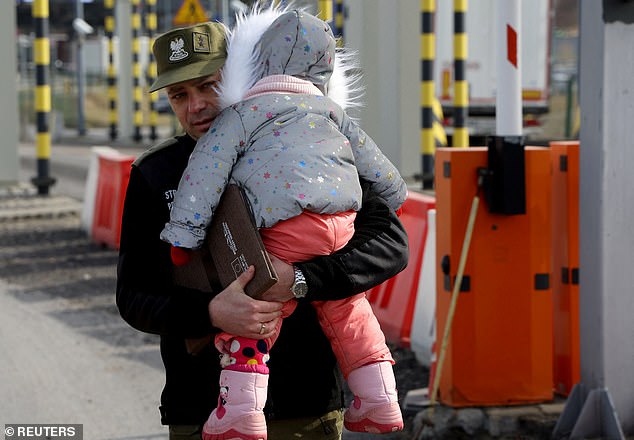 A Polish Border Guard carries a child at the border crossing between Poland and Ukraine, after Russia launched a massive military operation against Ukraine, in Medyka, Poland

The family, who are from Zaporizhzhia in south-eastern Ukraine, spent two days stuck in traffic trying to escape before walking over the border into Poland.

Ukrainian refugees who cross on foot are picked up on buses by border guards. Some have even been ferried by ordinary Poles who have volunteered to help.

The family described how locals here have answered the call of duty to help their neighbours as they flee Russia’s military assault.

‘On the border, Polish people were waiting with a lot of food and warm clothes,’ Diana, 14, said as she sat on her makeshift bed in the refugee camp, which used to be a shopping centre.

Mrs Petrova smiled with appreciation as she spoke of the kindness that has been shown. The family told the Daily Mail that they had been offered a lift by a stranger to Lubin, a six-hour drive, close to the German border.

‘We are safe now,’ Mrs Petrova said. ‘Maybe the situation in Ukraine will not last that long and we will be able to go back in a week or two.’

The sprawling aircraft hangar-like building, now dubbed Kyiv Hall, has 600 makeshift camp beds. The operation is being handled by Poland’s military, which is taking charge of the logistics and distributing supplies to those in need.

Donations of food, clothes, medicines and even toys have been handed out after a massive grassroots effort across Poland. 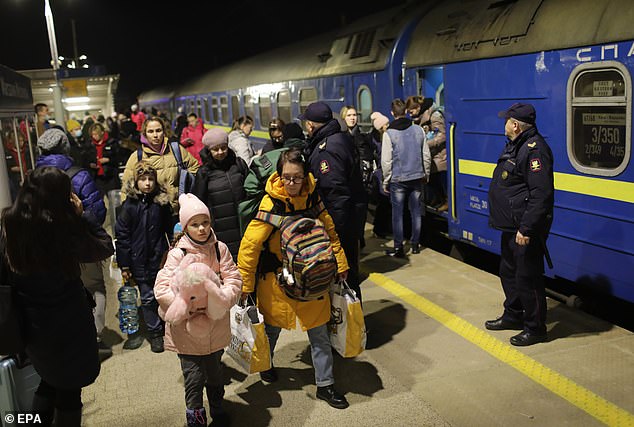 Ukrainian refugees arrive by train from Kiev at the Warszawa Wschodnia station in Warsaw, Poland

At the camp, the food is left out in cardboard boxes and shopping trolleys for refugees to collect.

And Izabela Nowak, 31, told the Mail how she had rallied a group of 30 volunteers to set up a soup kitchen for refugees.

‘We will be here for as long as we need to be,’ she said.

Miss Nowak works at a computer store run by Adam Holboy, 38, who decided to shut down his business so he could help the Ukrainians.

They gathered outside Kyiv Hall as two buses, both crammed full of people, pulled up and offered them a free ‘taxi service’ to other parts of the country. Some had even come from further afield to help. 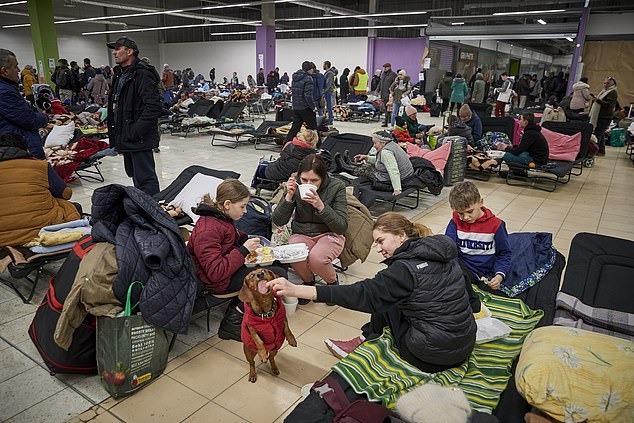 Frank Koryk, a 27-year-old wind turbine technician, said he had driven from Prague overnight so he could be here to take the Ukrainians to safety.

‘I felt this was better than just watching what was happening on TV,’ Mr Koryk said. ‘We Czechs have been under Soviet occupation as well, so I wanted to help.’

Polish volunteer drivers are walking through the building, calling out their destination at the top of their voice. ‘Anyone to Berlin?’ shouts one man.

But there were reports last night that African migrants in Ukraine were being blocked from entering Poland. A man said he and his family had been turned away from the border and told ‘no blacks’, The Independent reported.

Most of the arrivals spend just a few hours here before they leave for hotels, apartments, or to stay with relatives in other parts of Poland. The centre has a high turnover, with people coming and going on a near hourly basis.

One NGO worker, who declined to be named, said that there had been an increase in arrivals over the weekend. ‘It’s really chaos here now,’ he said. ‘We are trying to find beds for people, or at least places for them to go.

‘Most of those crossing the border seem to want to stay in Poland or go to Germany.’