Valentyna Pushych did not run away. In fact she was killed this weekend as she deliberately headed towards the place of greatest danger.

A Ukrainian military paramedic, she was shot dead by Russian forces as she tried to evacuate the injured from a front line on the edge of this city.

Known to her friends as ‘Romashka’ – Daisy – she was described by those who knew her as a ‘daredevil’ who was always ‘running to the most dangerous places’ to help others.

She has been laid to rest under a blanket of red roses, her grave covered with the blue and yellow of her country’s flag.

Daisy is not the only female medical professional to have made the ultimate sacrifice here in the last few days. 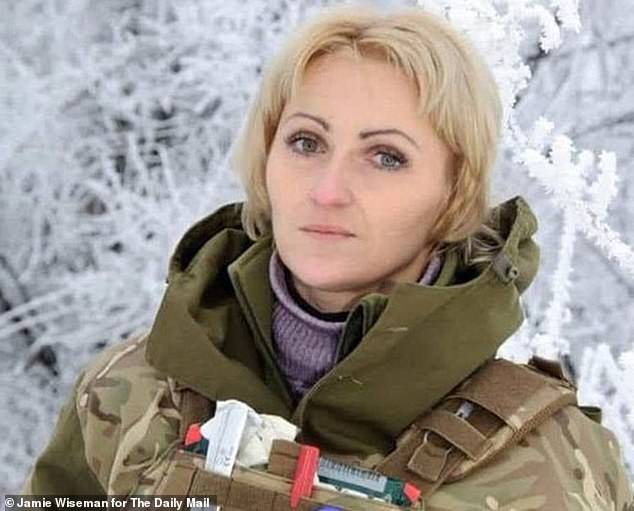 Valentyna Pushych did not run away. In fact she was killed this weekend as she deliberately headed towards the place of greatest danger. A Ukrainian military paramedic, she was shot dead by Russian forces as she tried to evacuate the injured from a front line on the edge of this city

Dr Maryna Kalabina, an anaesthesiologist, died when her car came under fire as she rushed her injured nephew to hospital from the village of Kukhari, 50 miles from central Kyiv.

Volunteer Anastasiia Yalanskaya, 26, was also killed as she delivered food to a dog shelter in Bucha, 20 miles from the capital.

‘I asked her to be extra cautious, that nowadays a mistake costs extremely much,’ her devastated husband, Yevhen Yalanskyi, said. ‘But she was helping everyone around.’

Tomorrow is International Women’s Day. This year, the achievements and suffering of the women of Ukraine should be at the forefront of global attention.

One of the abiding images of this dreadful war has been the exodus of women and children. More than one million have now become refugees abroad.

Their menfolk have largely stayed here to fight. But many women have also remained to actively defy the Russian threat.

They are of all ages, from primary school girls to pensioners, and from all walks of life. They are united by a love of country and a desire to do something to show it. 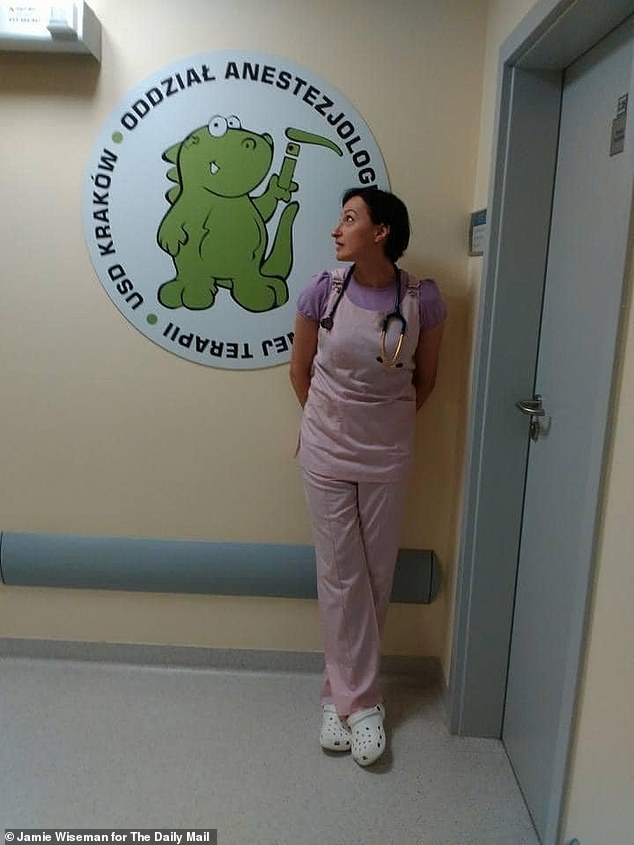 Dr Maryna Kalabina, an anaesthesiologist, died when her car came under fire as she rushed her injured nephew to hospital from the village of Kukhari, 50 miles from central Kyiv 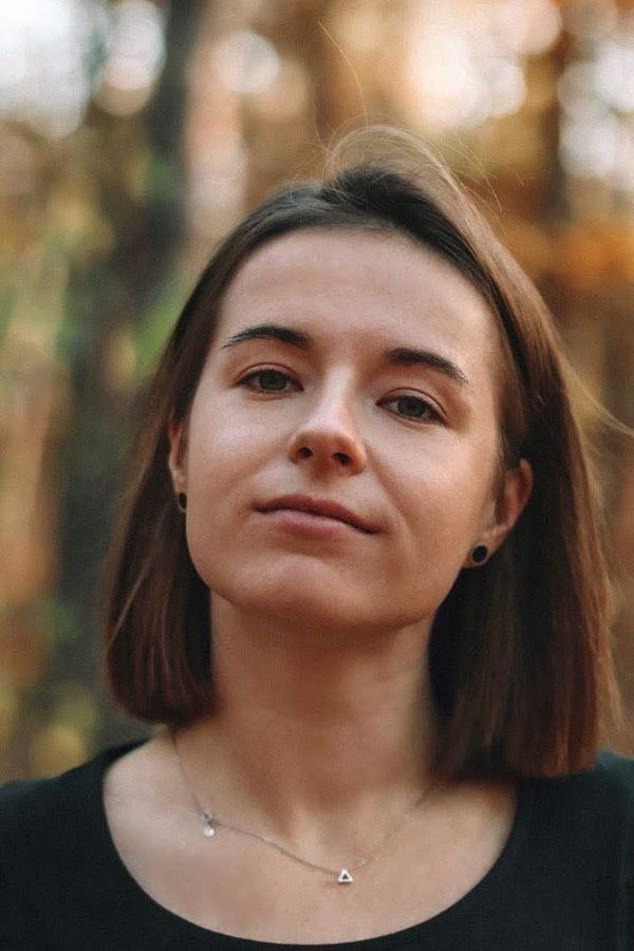 Volunteer Anastasiia Yalanskaya, 26, was also killed as she delivered food to a dog shelter in Bucha, 20 miles from the capital

Yesterday we met some of these hugely impressive females.

Between two platforms of the Metro’s ‘red’ line, deep under central Kyiv, a number of trestle tables have been set up.

Many of the stations are now being used as bomb shelters for civilians and the tables are covered in donated foodstuffs: Cartons of yoghurt, biscuits, pastries, milk, fruit, walnuts, mineral water and urns of tea and coffee.

A bedsheet draped over one of the trestles carries the handwritten message ‘Food for Children’. But children – or rather schoolgirls – are also among the volunteers running the enterprise.

Karina is the daughter of one of the Metro station’s female supervisors. Both mother and daughter have stayed in Kyiv and are doing their bit.

Karina reminds me of my own younger daughter, not least because she is 16 years old and a fan of Billie Eilish. She wants to go to law school and in different circumstances would now be studying for her exams.

‘Fifty of my friends have left Kyiv,’ she says. ‘I decided to stay because my mum works here and I believe it is my duty to help in such a dark hour.’ 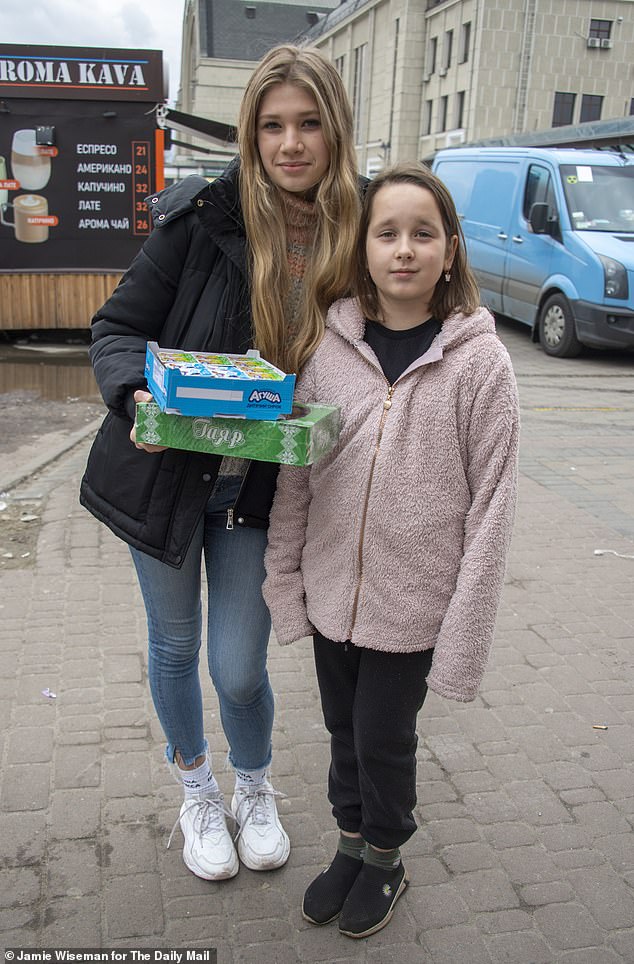 Beside her is nine-year-old Valeria. Why is she here, helping? ‘It is important to distribute food,’ she explains.

‘Because people are already weak and if they do not have enough strength then we will not win this war.’

What did she think of the Russian invasion? Valeria twice tries to articulate her feelings, before giving up with a shake of her head. When you are sensitive and only nine, President Putin’s actions are particularly inexplicable.

Until the war Tetiana, 30, was the manager of a branch of McDonald’s in the Kyiv suburb of Borshchahivka.

Now, along with her sister Olena, 35, she is supervising the food distribution volunteers.

For nine days now the siblings have been working around the clock. They sleep in the Metro stations. Today they began at 5am.

‘Yes, I was scared at first,’ Tetiana says. ‘But in a phone call with my parents we agreed, as a family, that we could not give up. The guys on the front line are having a really tough time and we have no right ourselves to retreat.

‘So I am not going to go anywhere. This is my land and I would not be able to sit calmly in any other place during such a time.’

Did she have a message for women outside Ukraine who are watching her country’s agonies unfold?

‘Yes,’ she says. ‘You must stay strong and enjoy every single second of your lives, and not be afraid of anything.’

On platform five of Kyiv’s main railway station, we find another unsung heroine.

The service to the city of Kharkiv, now under siege and enduring a savage bombardment by Russian forces, is due to pull out in ten minutes. Waiting by an open carriage door for any last-minute passengers – there are very few – is one of the train’s female guards. Her name is Lesia and she is 41 years old.

Her current journey started at Kharkiv, and has taken her close to the Romanian border and halfway back again. It now takes twice as long as it did in peacetime.

‘We have to do a very big detour because a bridge that we normally use has been destroyed by the Russians,’ she explains.

‘Going westwards, the train was very crowded with women and children. The sleeping berths are only meant for four people but there were four times as many in them. It was impossible to move about the train.’

By journey’s end, she will have been travelling and working for three days solid. Surely, what awaits her in Kharkiv, the final stop of her wartime odyssey, is a terrifying prospect. Scores of civilians are reported to have been killed in Ukraine’s second city by indiscriminate Russian shelling and rocket attacks. Why does she undertake such a risk?

‘I got used to the situation,’ Lesia shrugs. ‘In any case, Kharkiv is my home. And we must all do what we can to help Ukraine in these times.’

It’s a sentiment that has become a mantra here.

This week, the world will celebrate female achievement. The heroic women and girls who have chosen to stay in Ukraine and do their bit – even if it means paying the ultimate price – are an example to us all.