Scott Morrison has apologised for his controversial comments about sexual assault allegations where he said he viewed them through the lens of being ‘a father’ and discussed them with wife Jenny before making a public statement.

Responding to allegations former political staffer Brittany Higgins was raped inside a parliamentary office, Mr Morrison said last month: ‘Jenny and I spoke last night, and she said to me, ‘You have to think about this as a father first’.

What would you want to happen if it were our girls? Jenny has a way of clarifying things. Always has.’

In an emotion-charged press conference on Tuesday, Mr Morrison said he said he accepted his responses fell short of expectations – but he has always discussed issues with his wife.

‘I acknowledge that many have not liked or unappreciated some of my own personal responses to this over the course of the last month, I accept that,’ he said.

‘Whether that was seeking to openly share how I try and deal with such dramatic events, people might like the fact that I discuss these with my family, they are the closest people to me. But is how I deal with things, I always have.

‘I have grown up in a loving and supportive family, and I discussed this is my family and those who are closest to me, no offence was intended by me by say that I discuss these issues with my wife.

‘Equally, that is in no way indicated that these events had not already dramatically affected me already at that point.’ 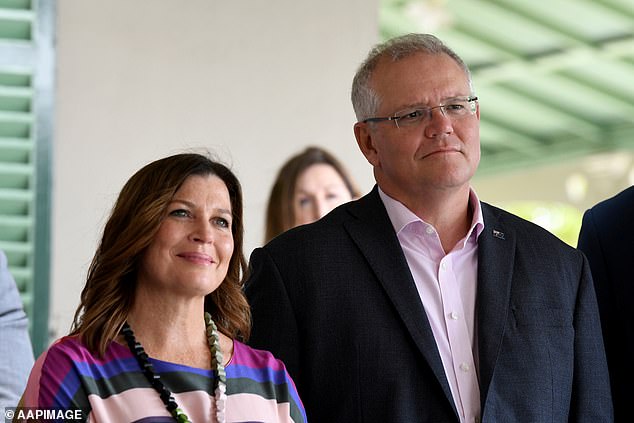