A pair of killer whales have put on a show for a group of snorkelers by twirling near the ocean’s surface.

Footage posted online shows two orcas frolicking beside a dozen snorkelers during a day trip to Rowley Shoals, a marine park 332km off the coast of Broome, Western Australia.

One of the cetaceans flipped over onto its back, puffing its chest up towards the top of the water as the other swam gracefully nearby, swaying its tail.

The adventure seekers stopped to tread water as the whales performed in front of them before swimming away.

The video was captured by Western Australia charter company The Great Escape, which runs cruises and water activities along the state’s coast line, before it was circulated on social media.

Online viewers were dlighted by the close encounter.

‘What a dream!’ a third added. 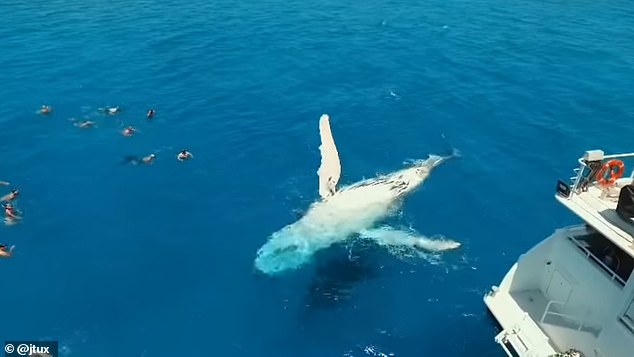 One of the killer whales rolled in the water, puffing up its chest into the water’s surface

Rowley Shoals, south of the Timor Sea, is made up three coral atolls and is home to diverse marine life, including fish, molluscs, sea turtles, manta rays, dolphins and whales, such as orcas and humpback whales.

Killer whales are highly sociable and intelligent mammals that live in groups in all oceans across the world.

An apex predator, they are the only known natural predator of great white sharks and also feed on seals, fish, sea birds, and whales bigger than them.

Orca attacks on humans in the wild are extremely rare and no deaths have been recorded, and the creatures have been known to work alongside whalers to help them hunt whales.