They came to the cathedral high on a hill seeking succour, and to light candles for peace.

Not all were as devout as the elderly ladies who arrived first, filing into St George’s through a side door and wiping snow from their best coats while chatting to Father Paul.

Most were refugees, their patchy faith suddenly sharpened by war.

People such as Nina Khomenko, a 21-year-old project manager for an IT company.

Normally she attends Mass only at Easter but, having fled the horror of Kharkiv hundreds of miles east, found herself drawn to the cathedral while out walking on only her first morning in Lviv, the historic capital of western Ukraine. 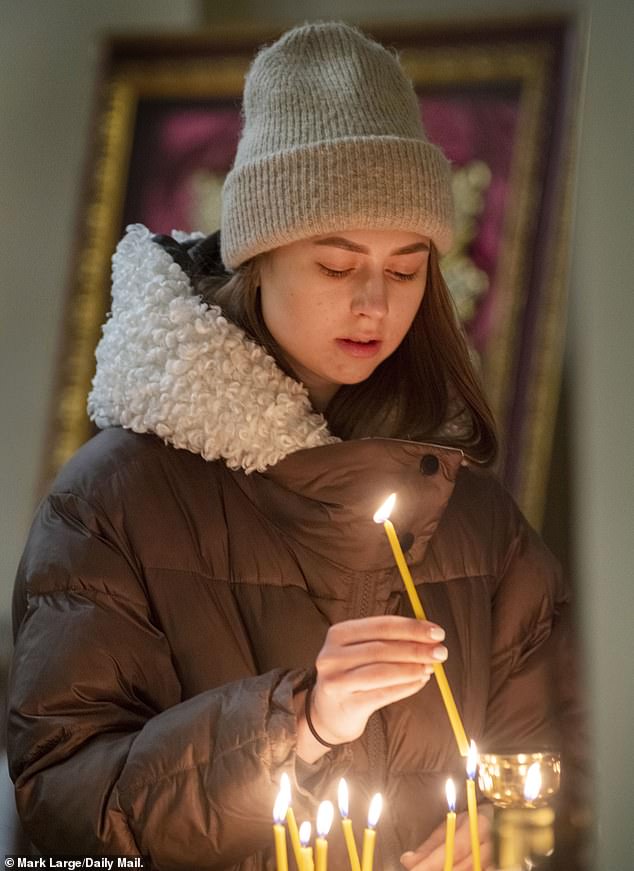 Nina Khomenko, 21, was among the many displaced Ukrainians who joined a service on Sunday morning at St George’s – a Greek Catholic church – in Lviv, the historic capital of western Ukraine

‘I arrived here last night after a terrible journey. When I saw this beautiful temple high above the city, I knew that I had to reach it.’

Built in the mid-18th century, St George’s – the sacred centre of the Greek Catholic Church in Ukraine – is indeed magnificent.

As much a national shrine as a place of worship, it holds a special place in Ukrainian hearts and one imagines that it has welcomed any number of refugees down the centuries.

Today the ogre is Vladimir Putin and his advancing army.

Worshippers waiting for Archbishop Ihor Vozniak to begin his service speak of little else.

Once inside, Nina waits behind a six-year-old boy and his father to light a candle.

When her turn arrives, she stands in contemplative repose. ‘I prayed for an end to the war,’ she says later.

‘I prayed that my family keep safe, my friends too, and for all those who have already died.

‘And I asked God to make our country better again.’

Originally from the Donetsk region in the east, Nina’s parents sent her to stay with relatives in Kharkiv, Ukraine’s second largest city, when fighting erupted between Russian-backed separatists and Ukrainian troops in 2014.

‘Now it is Kharkiv that is unsafe,’ she says. ‘War is chasing me around the country.’

She decided to flee when the city came under shell and missile attack, reducing parts of her old university faculty to rubble.

From her apartment she saw bodies of people carried from destroyed homes.

‘It was terrible. Only a few weeks ago I was socialising with friends in the city, leading a normal life.

‘Who knows now what the future will bring,’ she says.

Svitlana Pankova, 32, from Donetsk, who is making for Poland, also drops in to light a candle. ‘I prayed for an end to this suffering,’ she says.

Before leaving she hears Archbishop Vozniak denounce the Russian invaders for their ‘brutal aggression… for coming to our country simply to kill’. 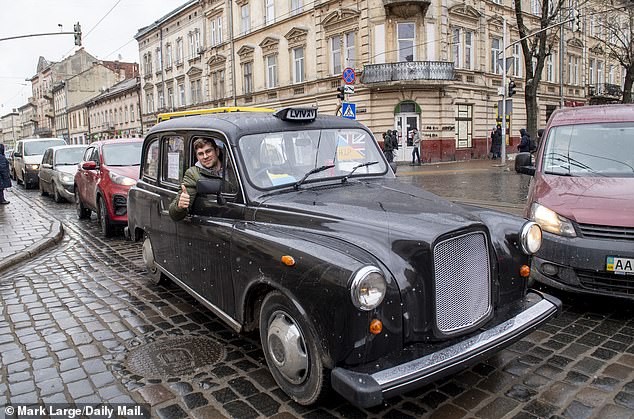 A 31-year-old software engineer, Roman Tymchyshyn, from Sunbury-on-Thames in Surrey, but born in Ukraine, took leave from his well-paid job in the UK to ferry refugees fleeing Putin’s forces in an old London taxi 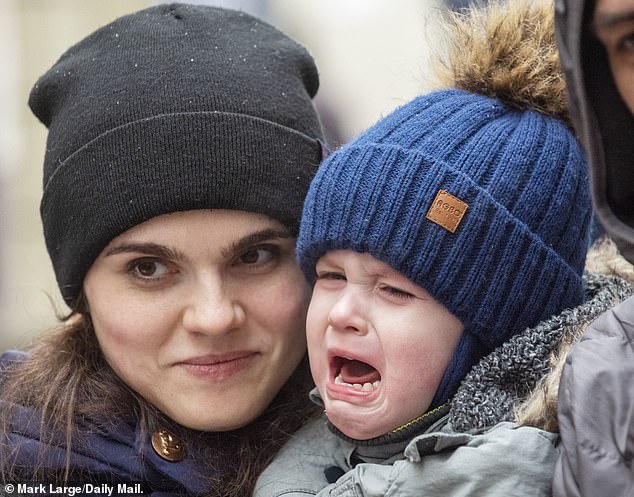 Pictured: Daria Zelenskiy holds her 18-month-old son in her arms at Lviv railway station after their long journey from Odesa

Svitlana nods in solemn approval as he adds: ‘Suddenly we live in a state of great anxiety marked by refugees fleeing abroad and migration within our country. We mourn the deaths of children, innocent civilians and the military.

‘Our country is defending itself from incomprehensible and senseless attack.’

Later, as worshippers drift back down the hill, Father Paul reports that the refugees doubled the usual congregation size.

‘Perhaps, he suggests, it is because of a growing unease in the city, which, since the invasion, has always been considered a safe haven.

Others sense it too. Fears that Russian guns will turn on Lviv find vivid expression in sandbags which have begun appearing in recent days.

Outside a drop-in clinic at the bottom of the cathedral hill they are piled six high.

That they might soon be threatened is a horrifying thought and one that occupies the minds of all those from the area who have volunteered to protect the city.

Among them was businessman Salvik Kizyma who said: ‘The idea of even a single Russian tank in Lviv is unthinkable.

‘People here talk all the while of this possibility.

‘We decided to take action and, while we all have young children, we are not afraid of dying.

‘We did not want this war but we will win this war.’

Now he must learn how to load and fire a Kalashnikov rifle and, among other things, how to search for weapons.

Already though, Salvik has manned checkpoints and patrolled the city streets. ‘Then we sleep for a few hours and go to the office about lunchtime.

‘We know there are Russian spies here and it is our job to stop them.’

Everyone, it seems, is doing their bit, whether preparing to repel the invaders or helping the huge humanitarian effort.

On Horodotska Street, near the main railway station, we come across 31-year-old software engineer Roman Tymchyshyn, from Sunbury-on-Thames in Surrey, driving an old London taxi.

He explains that he returned to the country of his birth to help evacuate refugees to Poland, operating a free taxi service to the border.

He says: ‘The day after the war broke out I was on the road to Ukraine to help. I use my taxi to help elderly and disabled people to get out of the country.

‘The cab is big and comfortable and it is much easier for the old people to get in rather than having to fight their way on to the trains.

‘I have a nice life at home. I am married and I have a good job.

‘But on the day that the Russian army invaded I asked my boss for time off and he agreed.

‘That night I packed the car and started driving.

‘I spent that night in Poland and arrived in Ukraine the next day.

‘My family are originally from Lviv and everyone – my mum and dad, my wife – have all come to do whatever we can to help.

‘My dad is old now but I will take a gun and fight for our freedom.’