A a deadly blue-ringed octopus and crab battled it out in an epic showdown on the sea floor as fascinated scuba divers watched.

Free diver Jules Casey found the unexpected pair locked in underwater combat while he was swimming off the Mornington Peninsula south-east of Melbourne.

The footage posted online showed the octopus attempt to move past an onlooking crab by whirling it’s glowing tentacles in the murky waters. 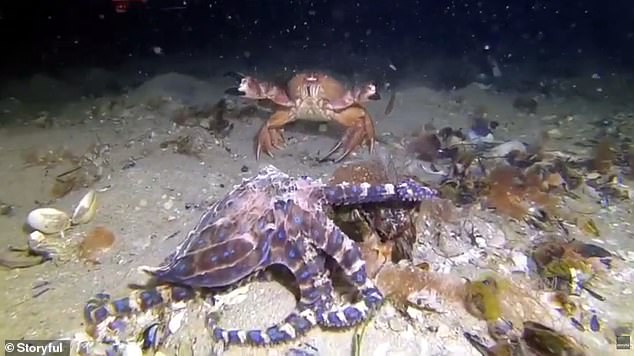 But the aggravated crustacean immediately jumped onto its back and fended off the venomous octopus by repeatedly striking its tentacles.

The showdown didn’t deter the eight-legged creature as it continued to swim along the sea bed and approach another crab.

The angry crustacean repeatedly pinched it’s claws at the persistent octopus and continued to stalk the mollusk as it moved along the sand.

The seasoned diver said she was pleasantly surprised to find the two creatures.

‘The octopus touches a crab and his quick reflexes and defensive position are almost hilarious,’ she said. 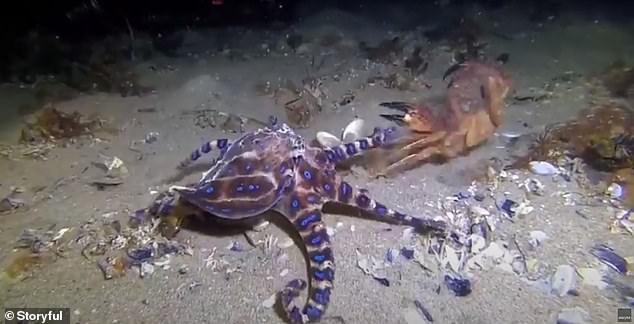 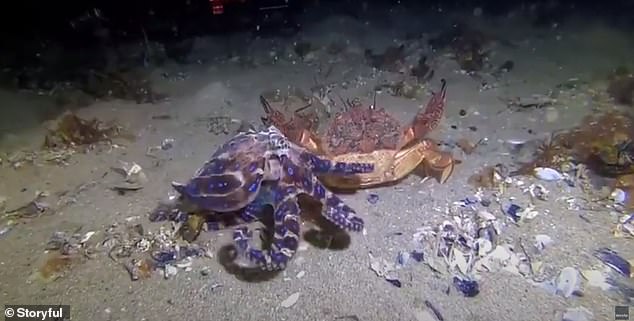 Jules said the venomous octopus swam towards her camera with outstretched tentacles.

‘She was curious but once she realised it wasn’t food she continued to hunt,’ she said.

The stunning footage, posted to Instagram on April 25, mesmerised viewers who were enthralled by the undersea duel.

‘So beautiful and calming to watch, I could watch for hours,’ one person commented.

‘She is absolutely beautiful! Those blue coloured markings,’ another wrote.

‘What a gorgeous octopus,’ a third wrote.

What are blue-ringed octopuses?

The blue-ringed octopus bite is highly venomous to humans and emergency services should be called immediately if it occurs.

Blue-ringed octopuses are not aggressive animals and most cases of bites are from a person picking up and handling the creature, or stepping on it.

It injects its toxin by biting – the venom is held in salivary glands and the mouth of the octopus in on the underneath side in the middle of the body.

Most bites cause minimal pain for the first 5-10 minutes then begin to throb and may get numb.

The bite could cause excessive bleeding, nausea, vomiting, changes in vision and difficulty swallowing.

After 10 minutes, the victim may have difficulty breathing, become paralysed, and require artificial ventilation until they can be transported to a hospital.

The duration of life-threatening symptoms is usually four to 10 hours – after that time, surviving patients typically show rapid signs of improvement.

There is no anti-venom available for blue-ringed octopus bites.