The summer of 2012 was hailed as a triumph for British sport as a home Olympics unfolded with gold raining on London in the most successful Games for Team GB in 104 years.

Of the 65 medals for the host nation, 19 of them gold, 12 gongs came from a single sport: cycling. 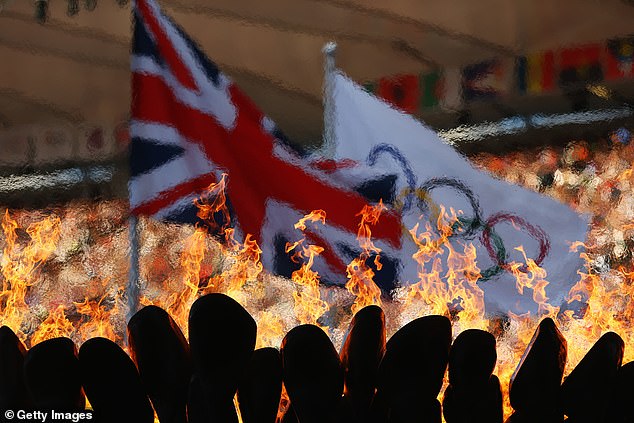 But today, yet again, the achievements of Britain’s cyclists will be viewed through a different prism as the sport’s national governing body, British Cycling, is under the spotlight for the wrong reasons.

As a Mail on Sunday investigation reveals, in the years in the run-up to London 2012, British Cycling had been allowed by the UK Anti-Doping Agency (UKAD) to conduct their own secret internal doping probe.

UKAD are supposed to be the independent overseers of clean sport in Britain, but their laissez-faire attitude in the years before the Games, uncovered by The MoS investigation, has now led to them being the subject of a formal investigation by the World Anti-Doping Agency (WADA). 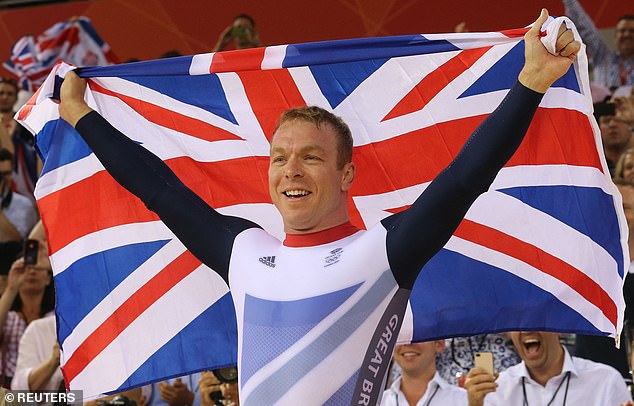 A WADA spokesman confirmed there is now a WADA inquiry into UKAD’s conduct in this matter. ‘We have asked our independent Intelligence and Investigations Department to look into this matter further and to contact UKAD to seek further information,’ said the spokesman. ‘Any allegation that an NGB may be testing their athletes in private, in a non-accredited lab, for the purposes of screening for a prohibited substance should be investigated thoroughly.’

The findings of The MoS’s investigation make a mockery of the notion that UKAD were genuine arms-length regulators at that time and raises serious concerns over whether UKAD were lenient towards British national governing bodies (NGBs) such as British Cycling and indeed their athletes.

The starkest illustration of the closeness between UKAD and British Cycling revolves around an episode where a British rider’s urine sample from an out-of-competition (OOC) test in 2010 contained irregular levels of nandrolone, a banned anabolic steroid. Nandrolone can also be produced naturally at high levels by some people and there have been spates of nandrolone contamination in supplements.

Rather than UKAD pursuing this case themselves to discover the cause of the anomalous sample – as the WADA Code in place at the time dictated – they tipped off the senior management team at British Cycling, who did their own investigation in secret. 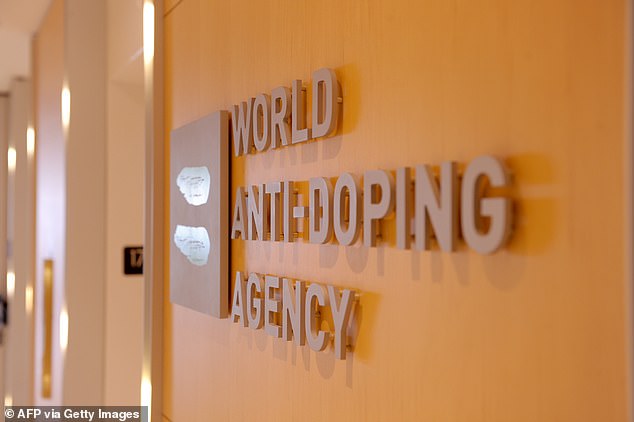 The anomalous sample came from one member of a high-profile group of British riders, a small number of whom were then asked by British Cycling to submit to private follow-up urine screening. The MoS knows the identities of the riders who were screened and contacted them for comment. They all declined to do so on the record.

The tip-off to British Cycling that one of their riders had the irregular nandrolone metabolites in 2010, sources say, came from UKAD’s then head of legal, Graham Arthur, to the senior management team of British Cycling. The team at the time comprised of performance director Dave Brailsford, head of medicine Steve Peters, team doctor Richard Freeman and head coach Shane Sutton.

A cloud of suspicion continues to linger over the achievements of British Cycling after a General Medical Council tribunal concluded this month with Dr Freeman permanently being struck off as a doctor, pending appeal.

This resulted from Freeman being adjudged guilty of ordering 30 sachets of a banned testosterone gel in May 2011 to the Manchester velodrome ‘knowing or believing’ it was to enhance the performance of a rider. No evidence pertaining to any specific rider was heard at the tribunal and Freeman maintained his position throughout the case that he was not a doper.

Back in early January 2011, a group of British Cycling staff became aware of the 2010 anomalous nandrolone test and different staff members privately discussed possible reasons for the adverse finding. 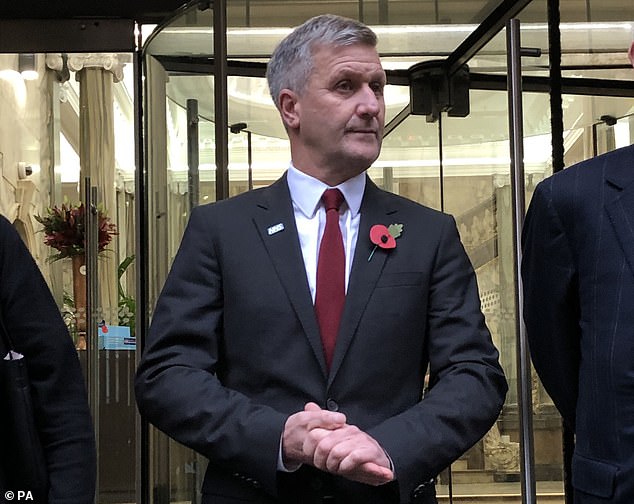 Richard Freeman was struck off as a doctor, pending appeal, with suspicion lingering over British Cycling’s achievements

They concluded there were four possible theories: a naturally occurring high level; contamination of supplements; a lone wolf doping rider; or a rider doping with the assistance of somebody, internal or external to British Cycling.

The management group quartet agreed on a two-prong strategy to investigate: batch-testing any dietary supplements the riders had been using; and testing some riders’ urine, privately, in a non-WADA laboratory. This urine testing would show whether any of the riders were producers of naturally high levels of endogenous nandrolone.

Freeman drafted a letter to the riders to ask for their consent to test their urine to study nandrolone levels. ‘It is confidential within British Cycling,’ the letter said. ‘Analysis will be performed by an independent laboratory, reporting only to myself and Dr Steve Peters and NOT WADA or UK Anti-doping. UK Anti-doping are aware of the study and support it.’

Peters told Freeman the letter was ‘excellent’ and instructed Freeman to distribute it. The riders all agreed to the testing. British Cycling then contacted a private laboratory, HFL Sport Science in Cambridgeshire, and inquired about the costs and logistics of doing the testing. The lab said they would need ‘clearance’ from ‘either UK Sport [who fund Olympic athletes] and/or UKAD’. 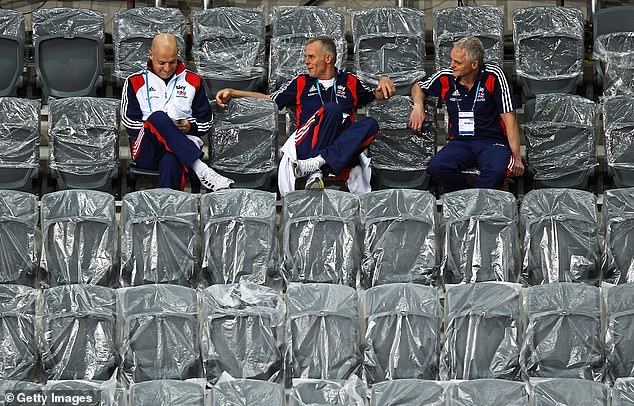 Freeman, on January 11, 2011, responded to the lab boss that UKAD were aware of and supported this ‘audit’ (private testing). One day later, Freeman contacted Arthur at UKAD to request an ‘approval email’ from UKAD for the lab boss and Arthur replied that he would be happy to speak to the lab boss about this.

Sources say Arthur had a phone conversation with the lab boss on or around January 13, 2011. The lab boss then emailed Freeman to say: ‘I’ve spoken to Graham. No problems. We are good to go.’

Sample bottles were dispatched and the riders produced four samples each over the subsequent weeks, which were then returned to HFL. The lab gave the samples a batch label of ‘WADA samples’. A lab source said this was not because WADA had any involvement but as a ‘generalised internal terminology for a urine test, screening for the list of compounds that would be routinely analysed for WADA or other regulators’. 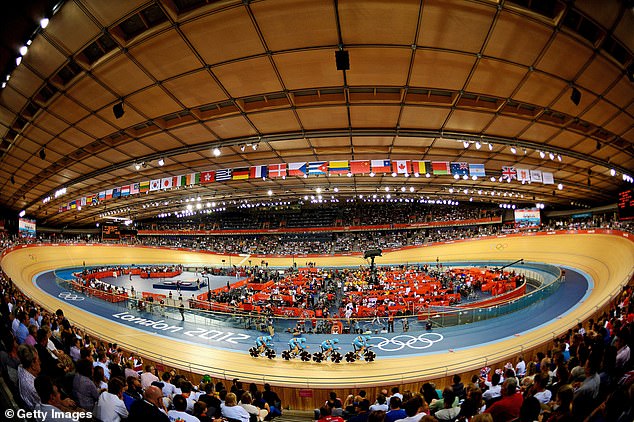 Today, again, the achievements of Britain’s cyclists will be viewed through a different prism

The HFL results were shared internally at British Cycling and discussed by Brailsford, Peters, Sutton and Freeman, all four of whom were aware of all the findings by late February 2011.

No action was taken by UKAD as a result of the 2010 finding aside from telling British Cycling about it. Sources say the British Cycling probe ended when supplement contamination was ruled out and the samples came back clean.

‘He was also often referred to as “Head of People” during his time at British Cycling. The most important [thing] here is that he wasn’t a clinical supervisor, therefore was not involved with prescribing, anti-doping, or testing procedures.’ 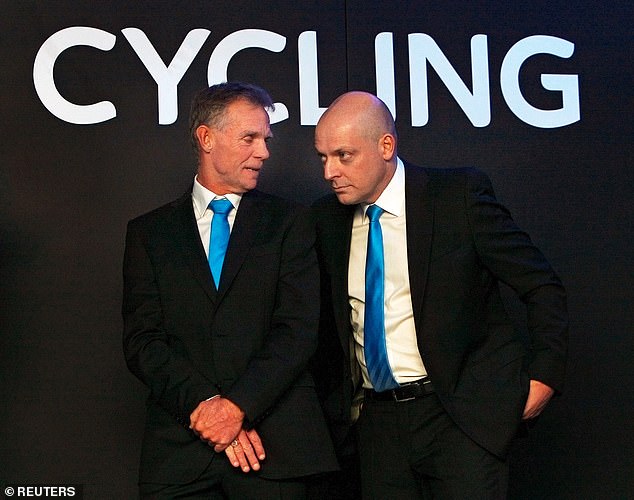 The MoS asked Peters whether British Cycling shared the private lab results with anyone at UKAD and his spokesman said: ‘Professor Peters would not be involved with these results.’

Peters’ spokesman then provided The MoS with a copy of the email sent to the riders, which described the lab as ‘an independent laboratory, reporting only to myself and Dr Steve Peters and NOT WADA or UK Anti-doping.’

The MoS asked Peters what further work British Cycling did to ascertain the cause of the anomalous 2010 test. His spokesman said: ’As explained previously, this relates to an area that Professor Peters wasn’t responsible for, nor involved with.’

The MoS asked UKAD why British Cycling had effectively been allowed to conduct their own investigation when the WADA code applicable at the time seems clear that UKAD should have conducted the investigation.

Clause 20.5.6 of that code stated one of the ‘roles and responsibilities’ of national anti-doping bodies such as UK was: ‘To vigorously pursue all potential anti-doping rule violations within its jurisdiction including investigation into whether Athlete Support Personnel or other Persons may have been involved in each case of doping.’

Given that doping was never pursued by UKAD even as a possibility for the 2010 anomalous test, UKAD appear to have neglected their duty.

The MoS asked British Cycling a detailed set of questions, including why it went no further when contamination and naturally occurring nandrolone had been ruled out. A spokesman for British Cycling said: ‘None of the people relevant to your enquiry now work for British Cycling and this makes it difficult to check any of the information you have sent, particularly given the events you describe are over a decade ago. 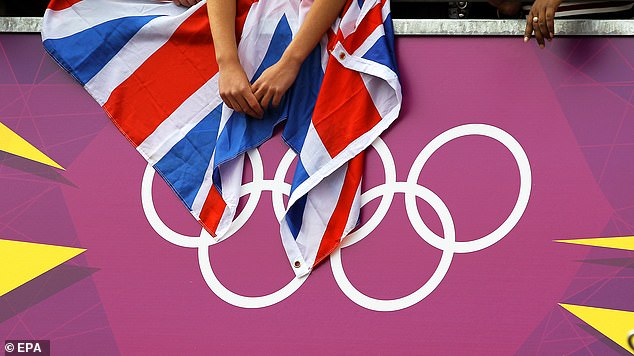 Sportsmail has asked what work British Cycling, who are in the spotlight after Olympic successes, did to ascertain the cause of the anomalous 2010 test

‘We are happy to check what email records we have from the time and – subject to GDPR and other legal or regulatory constraints – share our findings with you. But this is not a straightforward process and will take some time so we are not able to respond before your deadline [of Saturday].’

UKAD sent a statement from CEO Nicole Sapstead saying: ‘We cannot confirm or comment on individual test missions or results.’

Sapstead added that sometimes low amounts of a suspicious ‘threshold substance … are found to be below the threshold where an investigation is required.’ In apparent reference to UKAD providing an initial tip to British Cycling about the 2010 anomalous finding, Sapstead said: ‘We refute any implication that speaking to an NGB about a sample containing trace amounts of a threshold substance amounts to anything improper.’

UKAD’s statement did not address why, if the 2010 finding was not relevant enough to launch their own inquiry, UKAD green-lighted British Cycling to conduct their own secret investigation using a private non-WADA lab.

UKAD said they have ‘no record’ of a conversation between Arthur and the lab boss. Asked if anyone at UKAD had seen the results of British Cycling’s private urine testing, UKAD said: ‘UKAD has no record of this.’ Brailsford, Sutton and Freeman did not respond to questions asked by The MoS.

Late 2010: A Team GB rider has a random out-of-competition doping test and their urine contains an anomalous finding of nandrolone. The finding is deemed sufficiently significant that, sources say, UKAD’s head of legal, Graham Arthur, tips off British Cycling’s (BC) management.

First week of 2011: BC’s senior management team of Dave Brailsford, Steve Peters, Dr Richard Freeman and coach Shane Sutton consider reasons for the result from innocent naturally-occurring nandrolone to doping. They decide to test supplements taken by the three-man group where the anomalous finding occurred and privately test the rider’s urine to explore what that shows over time.

January 7, 2011: Freeman emails Peters with a draft version of a letter to be sent to the riders asking them to volunteer for urine tests to monitor their nandrolone levels. It includes this: 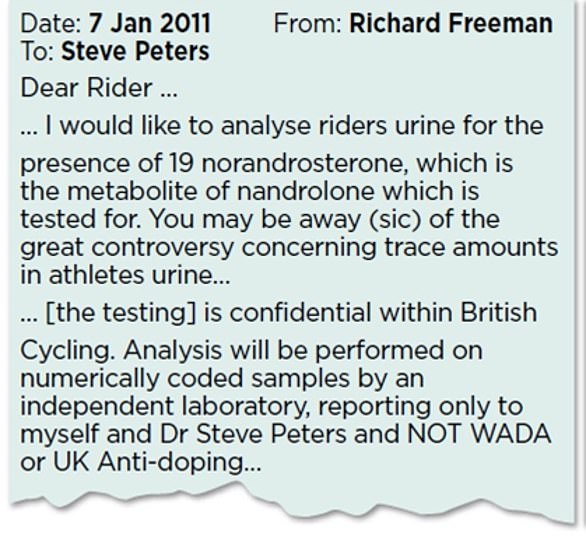 January, 10: British Cycling make phone contact with a private laboratory, HFL, in Cambridgeshire, asking about the cost and logistics of private testing. The lab respond later that day with a quote and say they need permission from UK Sport or UKAD.

January 12: Freeman emails Graham Arthur at UKAD saying the lab want UKAD approval for the private testing. Arthur replies he will be happy to speak to them. 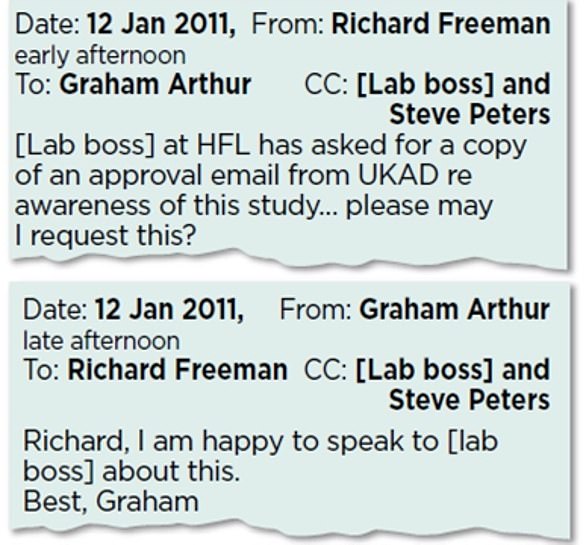 January 13: Lab boss emails British Cycling to say: ‘I’ve spoken to Graham. No problems. We are good to go.’ This is sent on to Steve Peters, who replies…

January 27: A coach with the riders training in Australia emails Freeman, Peters and Sutton: ‘I have given the [specimen] bottles to the guys’.

UKAD have confirmed to The Mail on Sunday they have no record of ever seeing the findings.