For the second day running, I awoke yesterday to the wailing sound of sirens warning of air attacks.

I had covered up the windows of my rented apartment with blankets as protection from flying glass in case of nearby explosions.

My colleague and photographer, Kate Baklitskya, slept behind a sofa for safety. 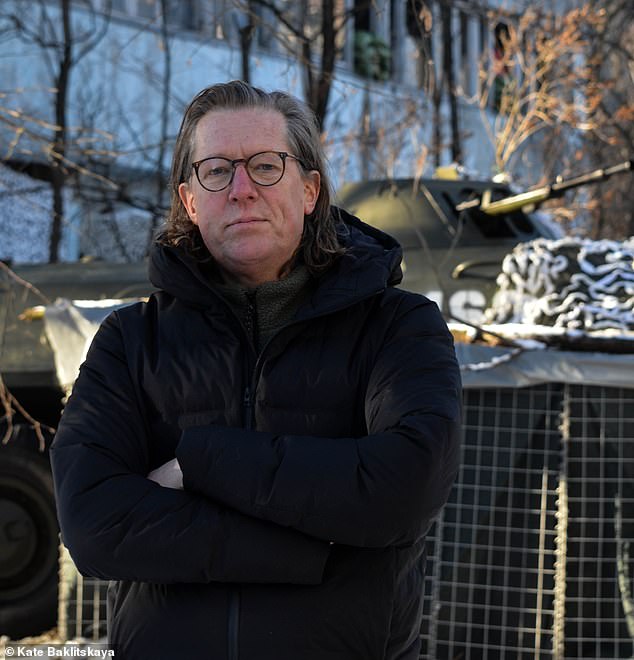 Ian Birrell at Chernobyl, in Ukraine. He writes: ‘For the second day running, I awoke yesterday to the wailing sound of sirens warning of air attacks’

Residential homes in the Ukrainian capital, Kyiv, had been shelled overnight and images on social media showed a Russian aircraft shot down just ten miles away, devastating a block of flats.

I looked out into the street as several groups of people hastily headed to shelters, some taking cats or dogs.

Others were setting out on the uncertain exodus from Kyiv — an estimated 100,000 people on the first day alone had fled Moscow’s evil assault.

The key question facing me — along with other foreign media here — was whether it was better to stay or go.

I decided it was time to get out rather than risk becoming trapped in a basement for days, unable to report freely amid intensifying shelling and street-fighting.

First, we needed a car — no easy task when the streets were deserted. However, a van driver agreed to take us.

But he failed to find petrol at four fuel stations and needed 100 litres of fuel for the 1,000 km (620-mile) return trip to Lviv, in the west of Ukraine.

Fortunately, we were able to secure two seats in a car with an almost full fuel tank being driven out of the city by another journalist. I agreed to meet him back in the central government area — where street-fighting broke out less than five hours later.

I went for one last walk in the Ukrainian capital after two weeks here. The sun shone as I strolled towards the botanical gardens, passing straggling groups of strained-looking people carrying bags and suitcases. It was 8.30am — normally rush hour — in a European capital city. 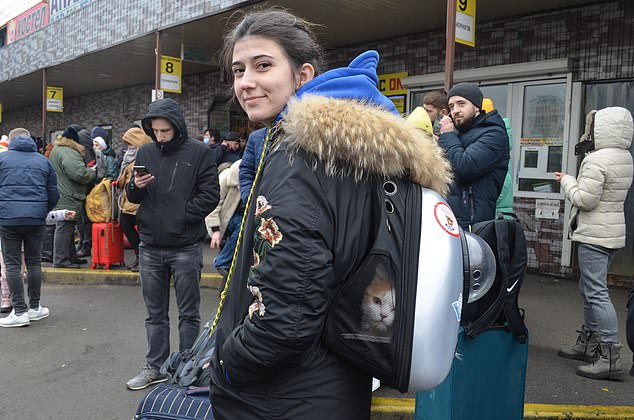 But the roads were almost empty, except for a few packed cars heading out of the city filled with scared people. All the cafes were closed.

In the city centre, the sound of shelling started again. I passed groups of well-armed soldiers and police.

There was no one around the famous tourist site of Saint Michael’s — a beautiful cathedral with golden domes.

It was there, in 2014, that pro-democracy protesters hid from the slaughter that killed 104 people and effectively started the long-running conflict that exploded last week.

After taping ‘Press’ and ‘TV’ signs on our silver Skoda, I noticed a young soldier, barely out of his teens, striding along with a holdall to join his unit. I wondered if he would survive the day.

At 10am, we set off but were soon stuck in a crawl of cars, vans and lorries. At Beresteiska Metro station, there were several Ukrainian troops atop the entrance with an armoured car lurking in trees behind them.

On the other side of the road, a soldier stood on a mound, legs apart, rifle dangling, as he surveyed the road. A colleague sat casually on the grass with several grenade-launchers resting against a tree, hidden behind blue sandbags.

Many of the cars were filled with families. A 24-year-old man called Maxim told me he was travelling with ten members of his family in a three-car convoy including his mother, father, a three-month-old baby and their pet spaniel.

It had already taken them two days to reach Kyiv from the city of Chernihiv, which lies east of Chernobyl and is in an area that in the past 24 hours has seen some of the most brutal battles against the Russians. 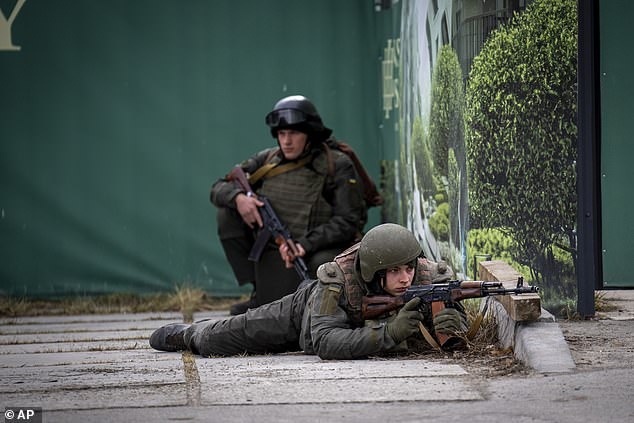 ‘We drove yesterday to stay with friends in Kyiv and were planning to leave on Thursday,’ he said.

‘At night, we heard planes flying over the apartment building. Judging from the sounds, they were descending to drop something, whether bombs or fighters. We were so scared.

‘We packed everything in our cars, then we sat there until we could leave. My only job now is to protect my family.’

While we progressed West, we started to see military vehicles heading into the centre of Kyiv: tanks, armoured personnel carriers with grim-looking troops sitting on top, humvees flying the Ukrainian flag from their radio mast, trucks carrying troops, fuel tankers and several motorised ambulances. After an hour, we had barely travelled one mile.

Beside us there was a steady tide of human misery struggling along the pavement — an endless procession of people with hurriedly packed backpacks and suitcases.

A family with a small girl on her father’s shoulders. Three teenage girls in brightly-coloured coats. An elderly couple pulling cases on wheels. A young man with a cat in his arms.

Ruslan, 45, was walking alone. He told me he was a taxi driver who had been working in Kyiv and was trying to get back home to Khmelnytskyi, halfway to the Romanian border.

‘There are such problems to get out of the city,’ he said. He had tried to buy a bus ticket but none were available so was now walking to the Dachna Bus Station. We passed the station six miles later. It was closed.

These scenes were a pitiful sight. So many lives being shattered as a venal dictator attempts to thwart democracy in a neighbouring nation out of fear that it might infect his own beleaguered and repressed citizens.

We passed a digital advertising board. One moment it showed the blue and yellow Ukrainian flag, then recruitment adverts for the volunteer Territorial Defence Force — although almost certainly too late to count in this cruel war. 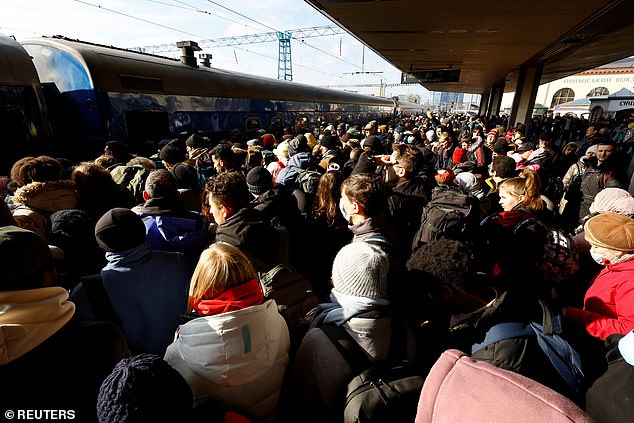 Crowds of people waiting to board an evacuation train from Kyiv to Lviv at Kyiv central train station, Ukraine today

One showed a cyclist delivering food who had decided to save his city in this time of danger. Another featured a woman doctor who had signed up, saying: ‘I always had the desire to save others.’

Still we crawled along. Shortly after noon, there were a series of ground-shaking explosions a few miles to the right of the car.

They came from Obolon, a district of Kyiv and the scene of fierce street-fighting between the Russian forces.

According to Ukraine’s defence ministry, the Russian contingent arriving in the city was led by soldiers wearing stolen Ukrainian uniforms — with tanks and mechanised artillery following.

I saw more troops and armoured personnel carriers head into battle, along with groups of men from the Territorial Defence Force walking towards the city.

Sirens rang out again. Vitali Klitschko, the former heavyweight boxing champion who is mayor of Kyiv, issued a warning that people should stay at home and enter bomb shelters when hearing the sirens.

He said: ‘There is fighting in several parts of the city and you can hear the shootings. The Ukrainian army is destroying Russian sabotage groups.’

We passed more military vehicles haring to the city. More armoured vehicles. More mechanised ambulances. And more of the depressing dull thuds from Russian bombs and missiles hammering down on the unfortunate people of Kyiv.

President Volodymyr Zelensky had introduced martial law on Thursday and ordered that state arsenals should be opened up so citizens could be given firearms to defend their city.

As we inched forward, defence minister Oleksiy Reznikov announced that 18,000 semi-automatic rifles and ammunition had been doled out.

‘The number of people who want to protect their motherland as part of the territorial defence against Russian occupation is growing and we are being sent more weapons,’ he said.

At 3pm, on the opposite side of the road, we passed a National Guard checkpoint monitoring vehicles entering the city. Black-clad officers with rifles in their hands and pistols on their thighs in holsters ordered five men out of one car to search it.

I spoke with other families in cars crawling alongside us. All had stories of fleeing in fear from the hail of terror falling from the skies on their homes. Yulia, 30, told how her mother had woken her during the night.

‘It looked like the sky was in flames and I realised it was the shelling. I was really scared. I woke up my husband, I told him we needed to leave but he said we must wait for the morning.

‘We ran to the bomb shelter and sat there for several hours. I started calling everyone I knew, asking if they could drive us out the city.’

They found some friends driving West who offered help. Yulia said: ‘If it was just me and my husband, we could have walked out of the city but we have a six-year-old daughter. My husband stayed behind. I hope he can get a bus or train out.’

Iryna, 28, told me that she was with her husband who was driving their two young children, her mother and grandmother — but they had no idea where they were heading except, hopefully, to safety. 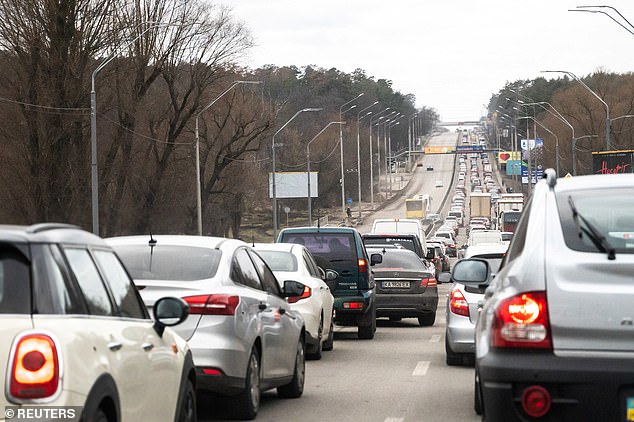 ‘We woke up today to the sound of shelling very close to our place. It was still night but we decided to leave,’ she said.

Next, we passed an abandoned concrete building where six soldiers in balaclavas were standing as two colleagues were talking on phones — then saw their tank’s gun poking out from the woods beside the road.

When I glanced back towards the city centre, I suddenly noticed a large expanse of empty road just behind us. Clearly, the traffic had been halted. It was impossible to tell if it had been stopped by Ukrainian or Russian soldiers.

My colleague, Kate, started receiving voice messages from a lawyer friend, Anna, in Kyiv, who told her that she had gone into her apartment’s basement, for safety, with her partner, their dogs, and supplies of food and water.

She said: ‘There are lots of people here. People are crying. It’s very tense and people are nervous.’

As darkness fell, we started seeing empty tank transporters and troop trucks thundering the wrong way down the other side of the road.

On the verge, there were a trio of surface-to-surface missile launchers — and still some unfortunate people plodding along with bags in the direction of Poland.

Kate’s text messages to Anna were not getting through. Presumably she was still in the basement.

Now it is nine o’clock as I write these words. We have been on the road for 11 hours and travelled 70 miles. Lviv remains a long way off; maybe we will head somewhere else to cover this nation’s torment. But at least we are — for now — safe, along with all those others in the thousands of cars fleeing from Kyiv.