The hedge fund founded by Brexit-backing tycoon Sir Paul Marshall has become the first investor to take a significant bet against Deliveroo since its disastrous stock market float last year.

Marshall Wace, set up with partner Ian Wace, has taken an £11million short position in the takeaway firm, The Mail on Sunday can reveal.

Deliveroo floated its shares on the London Stock Exchange at £3.90 in March last year, but the value plunged as investors baulked at its £7.5billion valuation – prompting critics to brand the firm ‘Flopperoo’. 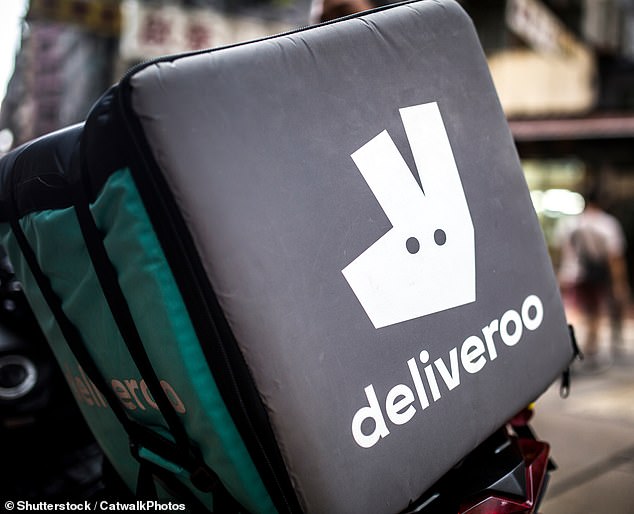 Flop: Deliveroo floated its shares on the London Stock Exchange at £3.90 in March last year, but the value plunged

But until now, no short positions – where traders gamble on the price falling – have been listed on the Financial Conduct Authority monitoring list. Only shorts above a certain threshold need to be published.

The stock has continued to fall, hitting a record low of £1.07, valuing the firm at less than £2billion.

The plunge has vindicated influential City figure Mark Hiley, who runs The Analyst website. He told The Mail on Sunday in April he believed Deliveroo shares could fall a further 40 per cent after its initial losses. Shares have tumbled more than 50 per cent since. The Analyst was the first to sound the alarm over collapsed German payment giant Wirecard, which was later engulfed in allegations of fraud. It also rounded on The Hut Group founder Matthew Moulding’s protein powder to make-up ecommerce business in September before its shares plunged – also first revealed by The Mail on Sunday.

The slump at Deliveroo has been blamed on many factors, from a global sell-off of technology stocks to fears of looming employment regulations for gig economy workers in Europe. The prospect of inflation, which could squeeze consumer spending, and the reopening of restaurants after Covid lockdowns have also weighed heavily on the price.

But the emergence of hedge fund heavyweight Marshall Wace as a short-seller represents a blow to investors hoping the share price fall had reached its nadir.

Marshall Wace was co-founded in 1997 and now has £42billion of assets under management. It is betting against a string of UK consumer stocks including Domino’s and retailers Boohoo, Burberry and WHSmith. Deliveroo’s biggest backers include Amazon and DST Global, the investment vehicle of serial tech investor Yuri Milner. Both have seen the value of their holdings shrink.

Russian-born billionaire Milner previously invested in Twitter, with funds backed by VTB Bank, the state-controlled Russian lender which has since been sanctioned. Washington put him on a list of prominent wealthy Russians in 2018.

Deliveroo’s flop was a blow to the banks tasked with pricing the float, including Goldman Sachs, JPMorgan, Jefferies and Numis. Analysts at each still recommend investors buy the stock. An investor who followed their advice a year ago would have lost two thirds of their money.

The share slump comes despite the fact that Deliveroo, co-founded by former banker Will Shu in 2013 and who remains chief executive, said that its gross transaction value – a measure of sales – had surged nearly 70 per cent last year to £6.6billion. Marshall Wace declined to comment.