Indonesia’s military and family members today paid their last respects to the 53 submariners who died when their vessel sank during torpedo drills off the coast of Bali.

Grieving relatives and sailors in ceremonial dress were seen casting flowers into the waters off Bali from the navy’s Soeharso hospital ship.

The KRI Nanggala 402 disappeared last week shortly after it dived below the surface during torpedo-firing exercises. An official cause has not yet been determined.

Officials have vowed to recover the sub from the seabed but are awaiting the arrival of a Chinese naval vessel capable of hauling objects from 3,000ft below.

High-powered magnets and air balloons are among a number of options on the table, but how the 1,400 ton sub loaded with missiles will be hauled to the surface remains unclear. 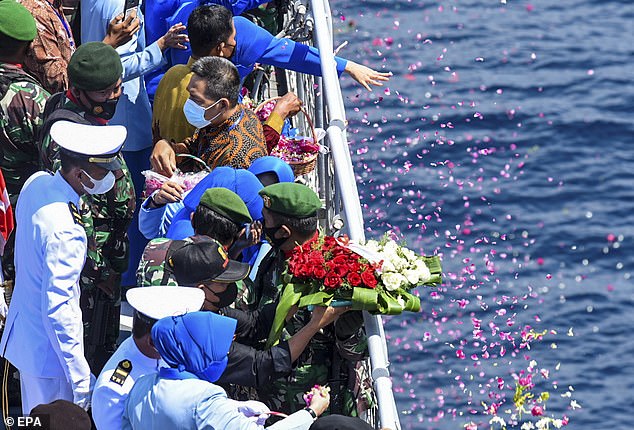 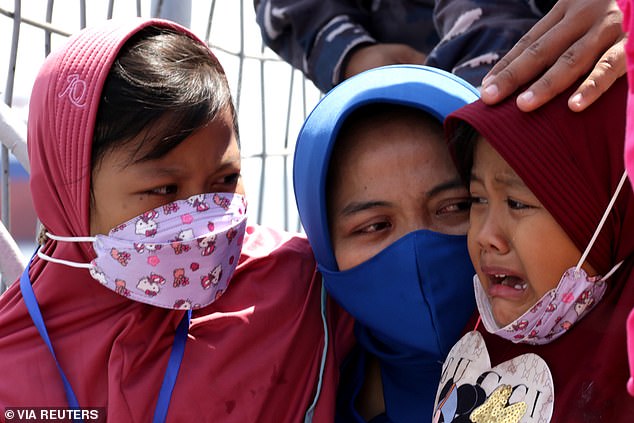 Families of the sunken KRI Nanggala-402 submarine crew members mourn during a visit at the site of the crash to pay their tribute, on the deck of Indonesian Navy’s KRI Soeharso in the northern waters off the island of Bali on Friday 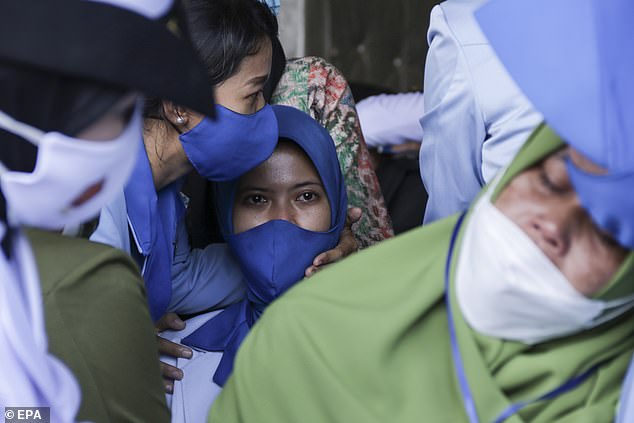 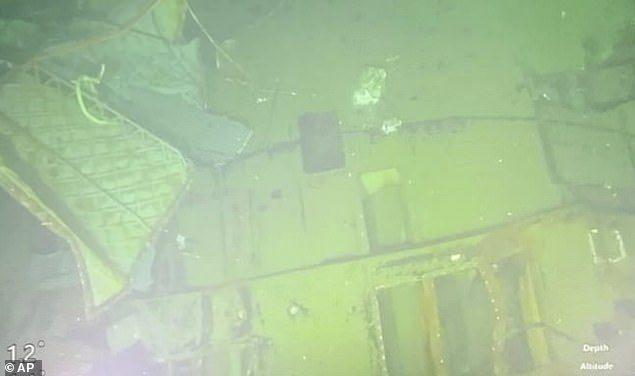 The crew are still believed to be inside despite its cracked hull, observed by an underwater rescue vessel supplied by Singapore.

The eerie images captured on Sunday were final confirmation that there was no hope of finding survivors.

President Joko Widodo met the families of the 53 crew members on Thursday and expressed his condolences.

The German-built diesel-powered submarine had been in service in Indonesia since 1981 and was carrying 49 crew members and three gunners as well as its commander.

It went missing last Wednesday while it was scheduled to take part in live torpedo training exercises.

The crew asked for permission to dive. It lost contact shortly after.

Later, search teams spotted an oil spill where the vessel was thought to have submerged, pointing to possible fuel tank damage and a catastrophic accident.

The military has yet to offer an official explanation for the sinking of the submarine. 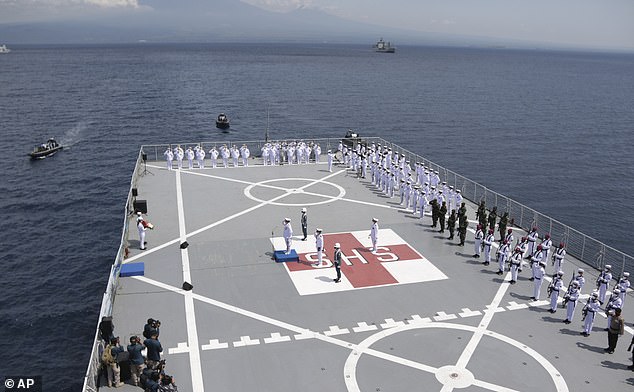 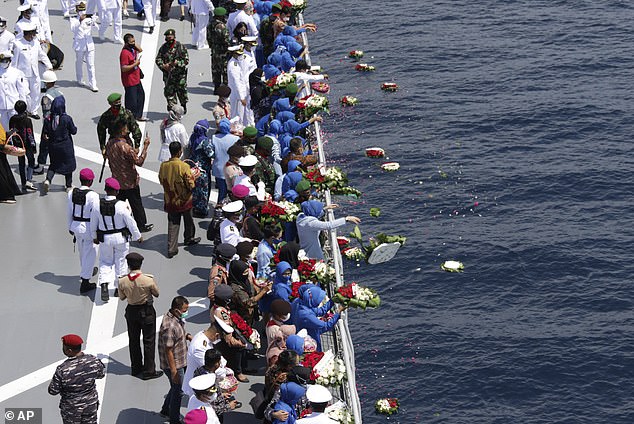 Flowers are thrown overboard during the remembrance ceremony on Friday 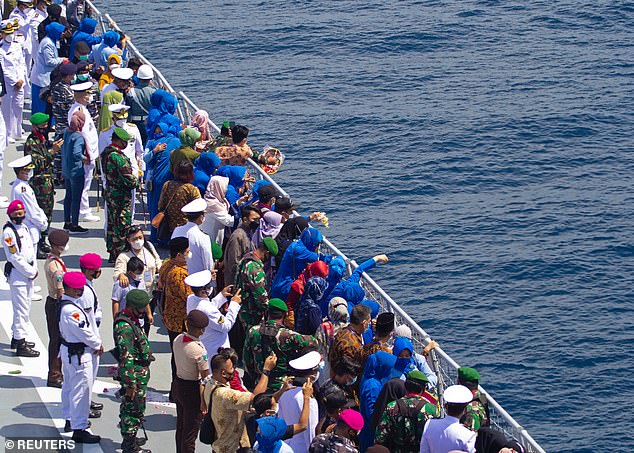 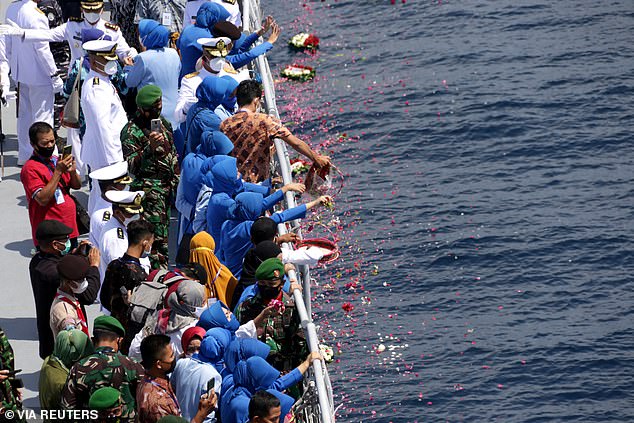 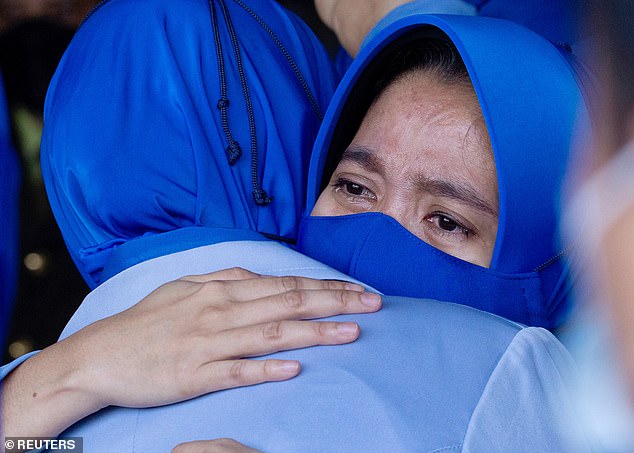 Women embrace during the ceremony today 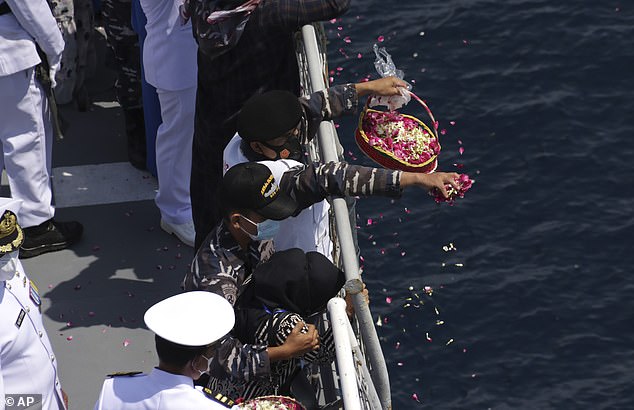 It has said, however, that the reconditioned vessel was seaworthy and discounted the possibility of an explosion.

The navy has said that the submarine may have suffered a blackout and left the crew unable to perform emergency measures.

Its hull would have been torn apart as it sunk to depths far below what the KRI Nanggala was built to withstand, they said.

The submarine’s former commander, Rear Admiral Muhammad Ali, has told local media that a so-called internal solitary wave could have been to blame.

The natural phenomenon occurs when different sea depths come together, creating forces that could have dragged the vessel down, he said. 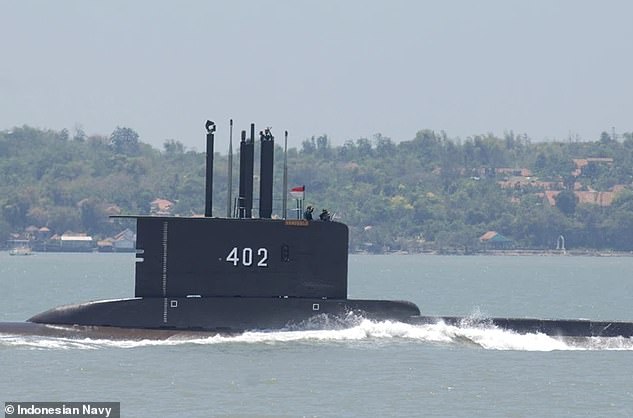 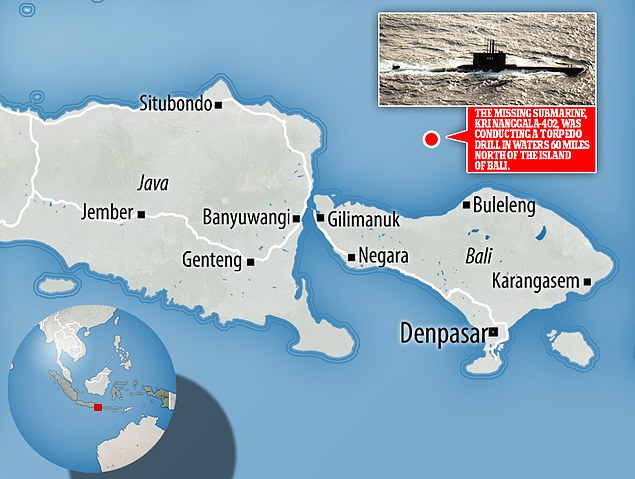 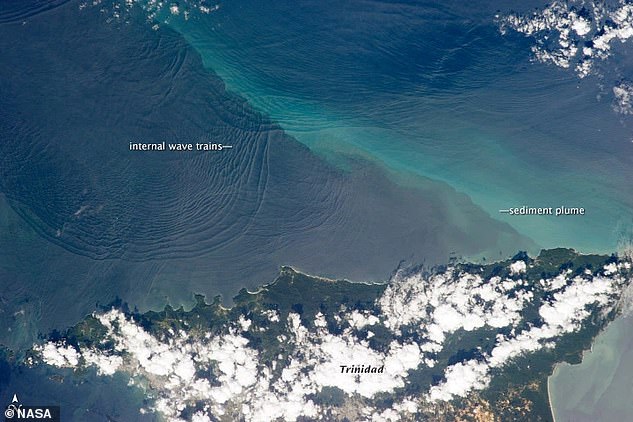 Internal waves occur when deep water meets shallower seas, causing a huge shift in tides and massive movement of water (as seen off the coast of Trinidad)

Indonesian defence officials said images from a Japanese satellite confirmed large underwater waves were present in the area at the time of the KRI Nanggala 402 sinking, moving a huge mass of water that the vessel couldn’t handle.

‘It moved up from the bottom to the north, and there’s a trench between two mountains,’ commander of the Indonesian Navy, Rear Admiral Iwan Isnurwanto, said.

Another admiral said the incident was ‘nature’s will’.

Why are flowers our saviors?