More than 60 Brits are thought to have crossed into war-torn Ukraine to fight invading Russian forces.

Polish border guard officials at the frontier point of Medyka told MailOnline that several UK nationals in ‘military fatigues’ had gone through passport control in the last few days.

Earlier this week, it emerged that former British Army and Special Forces veterans had been among those who had answered a ‘call to arms’ from Ukrainian president Volodymr Zelensky to join the fight. 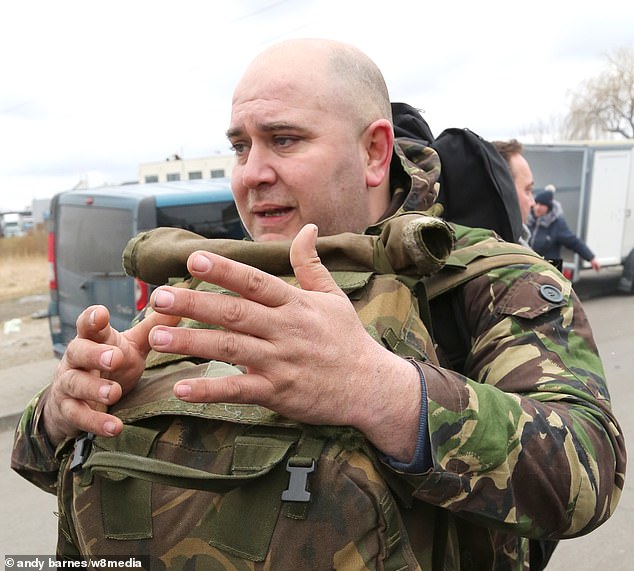 Construction company owner Neil Broome, 42, was carrying two bergens, one of which had a helmet and body armour

On Saturday, MailOnline met a group of four Brits who had flown into Poland and were heading across after flying into nearby Krakow on easyJet flights from Stansted and Edinburgh.

Among them was grandfather-of-two Neil Broome, 42, who is originally from Northern Ireland but moved to Scotland after 13 years with the British Army.

Construction company owner Neil was carrying two bergens, one of which had a helmet and body armour.

Neil said: ‘There must have been around 30 Brits at the hotel where we stayed after I flew into Krakow from Edinburgh and they were all talking about going over to fight.

‘I’ve got three grown up kids and two grandkids of two and three [years old] so I would like to get back in one piece to see them.

‘I’ve left the boys back home running the business.

‘I’m prepared to fight because what’s going on is wrong.

‘Like I said, I’ve got kids and grandkids and to see those wee children suffering just gets to you.

‘I’m prepared to stay three weeks but then I need to get back and run my business.’

As he went through passport control Neil joked: ‘I know it might be a one way ticket so that’s why I sorted my will out before I left.’ 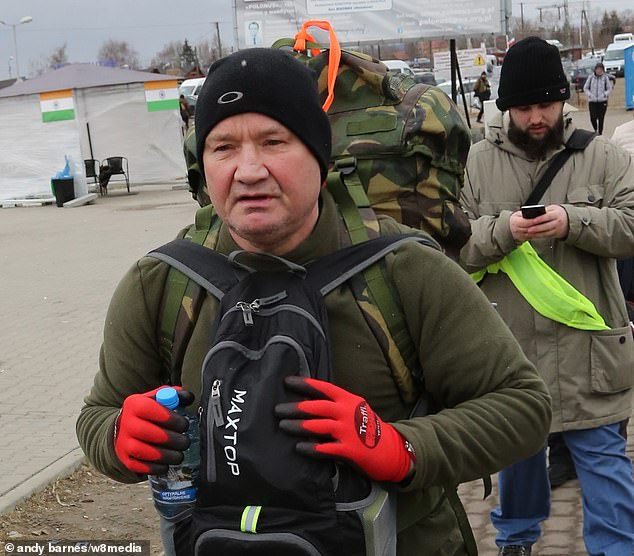 A man who gave his name only as Paul, 55, from the south coast said: ‘I’m ex-Army and want to help, simple as that. I can’t tell you who I served with mate, but I did more than 15 years.’

Charlie Banton, 26, from Aylesbury, Buckinghamshire, who admitted he had no military experience said: ‘I saw what was happening on the TV, to all those poor women and kids and decided to do something about it.

‘I just couldn’t watch helpless as Vladimir Putin’s thugs just indiscriminately killed these people so I jumped on a plane.

‘I understand the dangers and I know I may have to use a gun, I don’t know how to but I’m sure the Ukrainians will teach me.

‘My mum and dad know I’m here, they are worried about me but at the same time they are proud of me for doing what I’m doing.

‘I lost my son to cot death about five years ago and I’ve had other issues but this will give me a chance to do some good with my life.

‘I met some other guys on the plane who are doing the same thing and we were told by the Ukrainian Embassy in London to just let the border guards know when we get over the they will take care of everything. 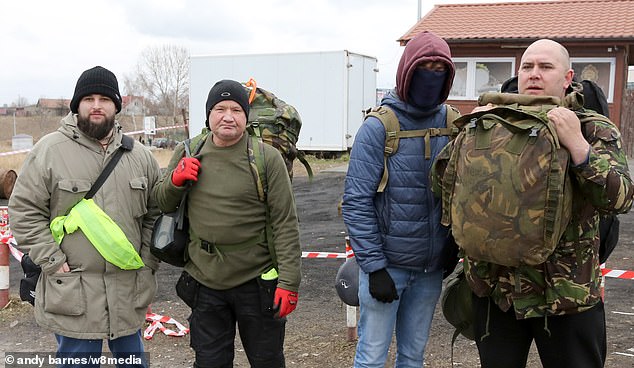 ‘It is foolhardy, dangerous and risky but I’m grown up and I know what I’m doing.’

Another man, who would only give his name as Joe, 25, and who said he was from south-east England, said: ‘I got out of the British Army six months ago.

‘I did six and half years but I’m not prepared to say with which unit and haven’t really done anything since then, so I wanted to see how I could Ukraine.

‘Having served in the forces I know the risks.

‘Am I prepared to die? Well, we will see what happens but everyone thinks they are Superman but you never know.

‘I will just do what I can to help because the Ukrainians are being bombed by that a*****e Putin.

‘I’ve struggled since I left the Army so this gives me a chance to put into use what I’ve learnt.

Another of the group, who gave his name only as Paul, 55, from the south coast, and also said he was ex-military, said: ‘I came out Friday from England and met these guys in the hotel in Poland. 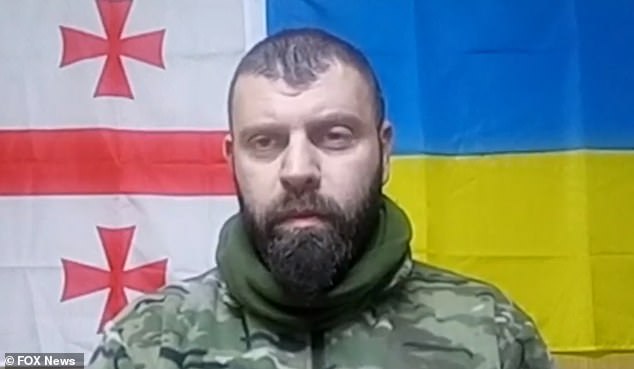 Commander Mamuka Mamulashvili, of the Georgian National League, which was formed to fight Russia after the 2008 invasion of Georgia is also battling Putin’s army in Ukraine

I’m ex-Army and want to help, simple as that. I can’t tell you who I served with mate, but I did more than 15 years.

‘I’ve seen action in the past so I know what I am getting myself into.

I’m a little bit on the older side now so would prefer to do something more humanitarian but if they need military personnel I’m willing to get stuck in and fight if I have to.’

Commander Mamuka Mamulashvili, of the Georgian National League, which was formed to fight Russia after the 2008 invasion of Georgia is also battling Putin’s army in Ukraine.

Mamuka told MailOnline: ‘I’m expecting several British volunteers this weekend. Some of them are old comrades and others are new.

‘They have been told to get to Poland, cross the border into Ukraine and then make their way to the city of Lviv where they will receive further instructions.

‘It’s going to be very tough and intense and now it is the civilians who are paying the price but we will hold on to the end and for victory.’