The House Republican campaign arm is employing an aggressive online fundraising strategy that tells potential donors who won’t sign up for recurring contributions that they are a ‘DEFECTOR’ and that former President Donald Trump will be informed about it.

The fundraising by the National Republican Campaign Committee came to light just days after it was revealed the Trump campaign was forced to refund $122 million to online donors, many of whom claimed they had unknowingly signed up for recurring online donations.

The appeal comes at the bottom of a ‘Trump Social Media Poll’ that claims the former president is planning to launch a new social media sight ‘very soon.’ 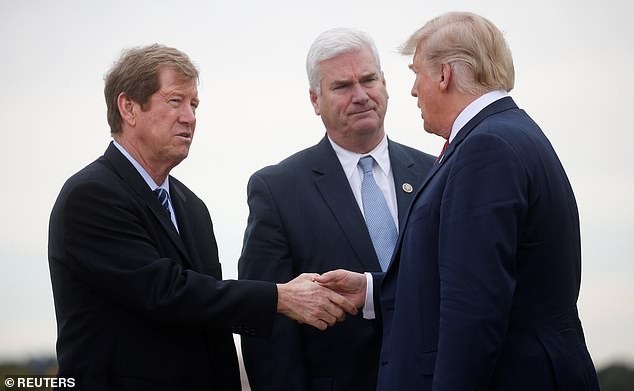 U.S. President Donald Trump talks with U.S. Rep Jason Lewis (L) and Rep. Tom Emmer (C) the chair of the National Republican Senatorial Committee, on October 4, 2018. The NRCC has conducted fundraising using pre-checked boxes and threatened to tell Trump they were a ‘DEFECTOR’ if it weren’t checked

Then, a pre-checked yellow box tells them. ‘We need to know we haven’t lost you to the Radical Left. If you UNCHECK this box, we will have to tell Trump you’re a DEFECTOR & sided with the Dems. CHECK this box and we can win back the House and get Trump to run in 2024.’

Lower down inside the box, it says: ‘Make this a monthly recurring donation’ – which provides authorizations for deductions again and again. 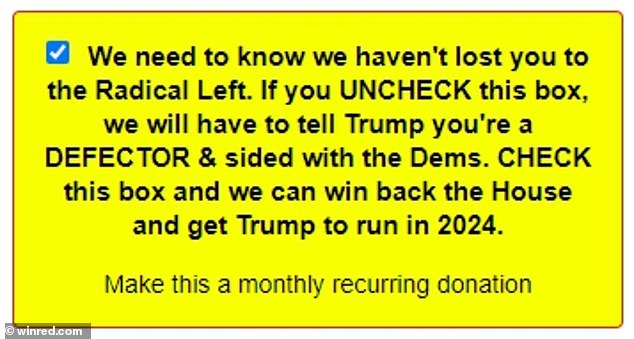 BOXED IN: Donors were told if they unchecked a box ‘we will have to tell Trump you’re a DEFECTOR’ 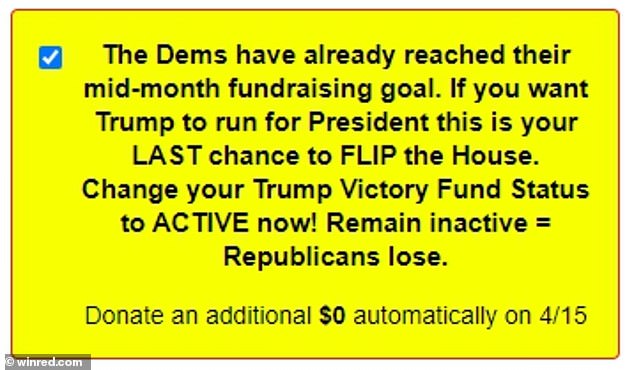 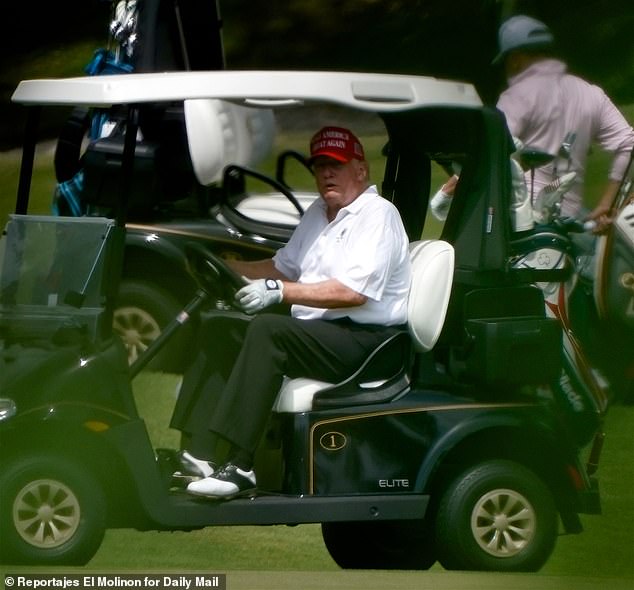 Another pre-checked box explicitly ties a House Republican takeover to Trump running for reelection, and allows for an additional specific donation. The box states that: ‘If you want Trump to run for President this is your LAST chance to FLIP the House.’

The fundraising was identified by former anti-Trump Republican operative Tim Miller  in the Bulwark.

The appeal also offers to activate ‘5x matching’ – a tactic Trump’s campaign used repeatedly in the fall of 2020 without offering specifics or assurances that Trump himself provided the match.

Rep. Tom Emmer of Minnesota, who chairs the NRCC, told Politico last month it would not be ‘helpful’ if Trump follows through on his threat to back primary opponents against 10 House Republicans who voted to impeach him.

‘He can do whatever he wants. But I would tell him that it’s probably better for us that we keep these people and we make sure that we have a majority that can be sustained going forward,’ he said.

It follows a  New York Times investigation that Trump has been forced to pay back $122 million to donors who were got saddled with recurring payments to his 2020 reelection campaign.

The donations poured in during the fall at a critical time in Trump’s campaign against Joe Biden.

The pre-checked box is a fundraising tool by for-profit GOP firm WinRed, which was founded in 2019, the Times reported. Democratic group ActBlue also allows some prechecked donation boxes.

The report  found Trump’s campaign employed deceptive fundraising tactics that saw thousands of his supporters unwittingly sign up to give repeat contributions, when they had only intended to make a one-off payment.

The pre-ticked boxes on fundraising emails often buried under lines of fine print sparked thousands of complaints to banks and credit card companies.

Among the victims were elderly and military veterans, as well as some experienced political operatives, and many have been left with overdraft fees and busted credit card limits.

One victim, Stacy Blatt, was battling cancer and living in a hospice in Kansas City when he donated $500 last September, the New York Times reported.

Blatt was charged another $500 the next day, and then $500 each week until October, and it was only after his rent and utility bills bounced that his family discovered what had happened.

‘It felt like it was a scam,’ his brother Russell, who helped Stacy get to the bottom of what had happened, told the Times.

A bright yellow box began appearing in emails with the words: ‘Make this a monthly recurring donation.’

Anyone making a donation would have to opt-out to avoid being charged repeatedly.