Germany is considering bringing back national service after the Ukraine war demonstrated that ‘peace is not a law of nature’.

Political leaders from all sides of the Bundestag have backed the reintroduction of compulsory service in the German military, a week after Chancellor Olaf Scholz pledged a one-time £85bn spend to boost the strength of the country’s forces.

In a decision hailed as the waking of a sleeping European giant, Mr Scholz also pledged to increase Germany’s defence spending above 2 percent of GDP by 2024, in line with NATO requirements for the first time. 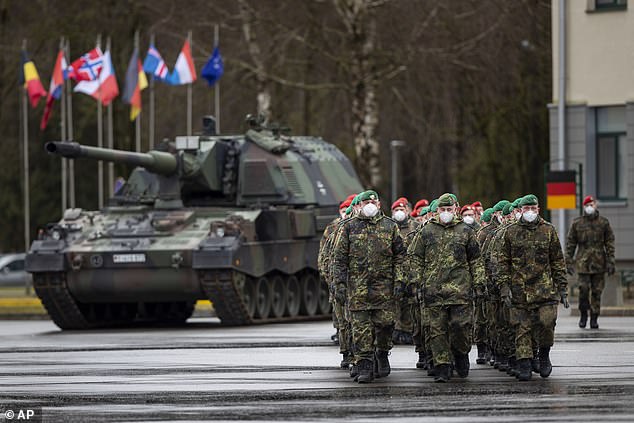 Germany is considering bringing back national service after the Ukraine war demonstrated that ‘peace is not a law of nature’. Pictured: German Bundeswehr soldiers of the NATO enhanced forward presence are seen in Lithuania on February 22

Now, ministers are arguing in favour of the reintroduction of compulsory service, with Carsten Linnemann – deputy leader of the conservative CDU – saying on Sunday that to do so would ‘do real good’ for Germany by bringing people together.

‘What we’re witnessing at the moment is that peace is not a law of nature,’ Mr Linnemann said in an interview with broadcaster ZDF.

He also said that Germany has ‘too many people putting themselves before the state,’ and that compulsory service could counteract increasing polarisation.

Scholz’s governing centre-left SPD party is also calling for the return of conscription among men and women over the age of 18.

Wolfgang Hellmich, the SPD’s defence spokesman in the Bundestag, said the programme would ‘promote a sense of community’ and urged for a debate on the issue to be held urgently.

‘It needs social consensus,’ he said, according to The Telegraph.

Until 2011, all adult Germany men were required to perform a year of compulsory military service, although they could also opt – on moral grounds – to undertake service in civil society. 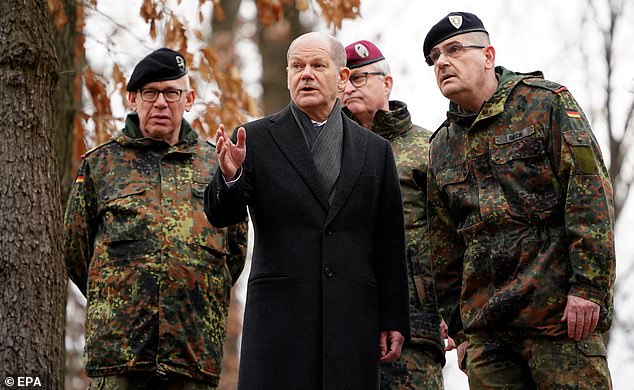 German Chancellor Olaf Scholz (centre) at the ‘Forest of Remembrance’ memorial site during a visit to the Bundeswehr Operations Command in Schwielowsee, Germany, 04 March 2022

While a law was passed at the time ending the programme, it was said then that conscription could be brought back during times of war or increased tensions.

There have been some recent calls in Germany for compulsory service to be brought back, but it is clear that the Ukraine crisis has made the position more mainstream.

Speaking to Die Welt newspaper, CDU deputy leader in the Bundestag Johann Wadephul said that compulsory military service would be ‘a chance to find a lot more recruits’ for the German military as it expands in the coming years.

He also proposed a system that would see those who undertake military service gain points in a pension system or a easier path to places at universities.

Other politicians have been more sceptical of the suggestion, arguing that the German forces should focus on modernisation. 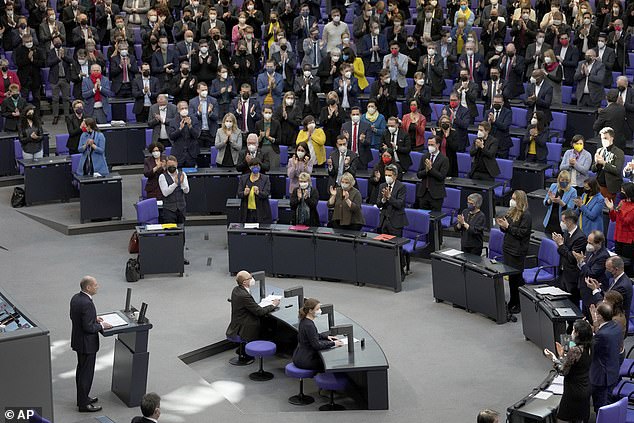 Lawmaker applaude during German Chancellor Olaf Scholz’ speech on the Russian invasion of the Ukraine during a meeting of the German federal parliament, Bundestag, at the Reichstag building in Berlin, Germany, Feb. 27, 2022

‘We need technology and weapons systems, not brains. Conscription is not an issue at this point in time.’ Florian Hahn, defence spokesman for the CDU in the Bundestag, said according to The Telegraph.

In another break to Germany’s pacifist inclinations, Lithuania’s defence minister said on Sunday that the country will deploy air defence capabilities to Lithuania.

The United States will send a troop battalion armed with tanks, Lithuania said.

In addition to the £85bn one-time spend, Germany also announced that it would be sending 1,000 anti-tank weapons, 500 surface-to-air Stinger missiles and thousands of gallons to petrol to Ukraine.

The one-time £85bn special fund and the increased spending pledge is significant for Germany, which has come under criticism from the United States and other Nato allies for not investing adequately in its defence budget.

It currently only spends about 1.5 percent on defence, but the new pledge will make it the biggest defence spender in Europe.