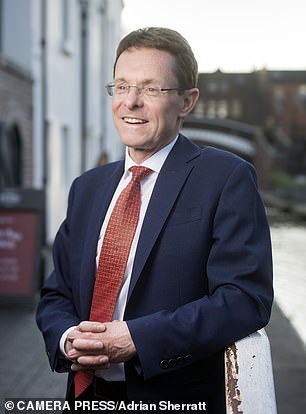 Andy Street is one of few high profile businessmen to make the switch to front-line politics in recent years. And, by his own assessment, he has ‘thrived’. Four years ago he beat Labour – by the slimmest of margins, 4,000 votes – to become the West Midlands’ first mayor.

In six weeks, his constituents will be called to the polls for a second time.

His former business – by sheer coincidence – is at its own crossroads. Last year, the John Lewis Partnership struck a blow to the heart of his region when it permanently closed its giant Birmingham shop – and has warned more closures will follow later this month.

Street, who takes questions on the chain’s future in his stride despite the five-year gap since running it, has criticised Birmingham’s closure as a ‘dreadful mistake’. He now reflects on the lines he believes the group should not cross.

‘The flagship shop was Birmingham and I thought that was a mistake. Long-term, the John Lewis brand needs presences in the big regional cities,’ says Street.

‘My own view is that you have got to continue to invest in that part of it. You have got to find a way of winning on the high street. Even if there’s a challenge to profitability in the short term or you end up doing different things, broader services, in the space. You’ve got to stick at it.’

He was ‘fortunate’ to run it at ‘a relatively good time’ – sales grew by 50 per cent. But he insists: ‘First of all you have to be a brilliant retailer. I mean that was what we always did, wasn’t it? In the good years, we were winning market share pretty convincingly by having the best product at the best price with the best service. I still believe that has to be the essence of John Lewis’s distinction.’

Now the 57-year-old says: ‘I gave it all up because I wanted to serve my home city and region.

‘It wasn’t called ‘levelling up’ back then, but I believed there were opportunities for people in the West Midlands to do better than we had in the previous 30 years.’

Street is perennially – and genuinely, it seems – enamoured by a city that he says should compete with Paris and Berlin.

In his mild Brummie accent, he describes Birmingham as a ‘sophisticated city centre’ with diverse job opportunities. ‘I believed that we could get much more out of this major regional economy – and that the whole of the UK economy, including London, would be better for it.’

He adds: ‘Before the pandemic there was evidence that was beginning to happen. We had an economy that grew at 25 per cent in the five years to 2019, the fastest anywhere outside London.

‘Levelling up was happening. We saw young Londoners moving to the West Midlands – a positive net brain drain.

‘The economy was reshaping. Jobs we were creating before this were in digital and financial services – and they have been sustained. The vacancies are now coming back here faster than the national average and the booming sectors are tech, digital, health and life sciences – a huge £200million investment into the Birmingham Life Science Campus, for example.’ But he admits the pandemic has ‘bashed regional economies really hard’.

An estimated 100,000 job losses across the West Midlands in sectors such as hospitality are ‘about the same as we gained in the previous three years. A horrible symmetry.’

Myriad employment schemes are not just about draining jobs from London, though. 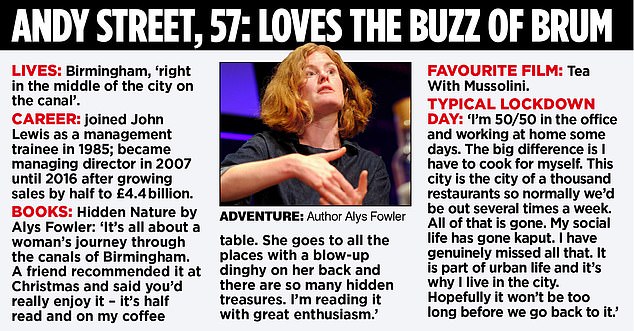 A new faculty at Wolverhampton college will train hundreds of electric vehicle mechanics, for example, and a local Kickstart youth employment programme has a target of 20,000 jobs.

‘The ingredients are all there. But is this all at the scale we need? Probably not. We need to see the Prime Minister’s plan – the Skills Fund commitment, for example – we need to see it feeding through on the ground.’

He says the future can still be bright in a post-Covid recovery. HS2 – ‘a one-hundred year investment’ and a Metro extension can provide vital support to the recovery. ‘I think there’s a long-term opportunity. These are places where your money goes a lot further. The quality of the houses, access to green space – these are things that people have really cared for in the past 12 months.’

Street says he fought hard for Government funding to unlock derelict industrial sites across the region into light commercial or residential – ‘old factories, copper works, steelworks and warehouses, some that have been stuck for 30 years and now they’ve got the go-ahead.’

He also predicts something ‘dramatic’ will happen with the now empty John Lewis store. There are ‘a number of potential suitors’ he hints.

Will it be better than having a John Lewis? ‘Of course not! It will be different. Newer. Something that benefits from that huge footfall in one, well-connected, central place. Just think about the big malls in China and the Middle East with eSports or ski slopes. And don’t forget this is the youngest city in Britain – so that also has to be thought about too.’

He admits ‘of course’ he’s nervous about the upcoming election.

‘I’ve savoured the past four years. Others can judge, but this is a very different political job and I felt like this job was made for me.

‘I’m proud to be a member of the Conservative party but I am not whipped by them. My only loyalty is to the citizens of this region and doing the right things for them.’