An Alabama deputy known as being a fan favorite on Live PD sobbed and began hyperventilating as she suffered a severe reaction to fentanyl she had touched during a drug raid.

Jefferson County Sheriff’s Corporal Deanna Marshall, 33, was administered two doses of Narcan after she pulled over on the side of Interstate 65 to radio for help on March 27.

Marshall’s intense reaction was captured on her body camera.

‘I’ve seen how quick it can take someone over on the many times that I have worked overdose calls. I’ve actually used Narcan on someone. I’ve seen them blue,’ Marshall said to AL.com. 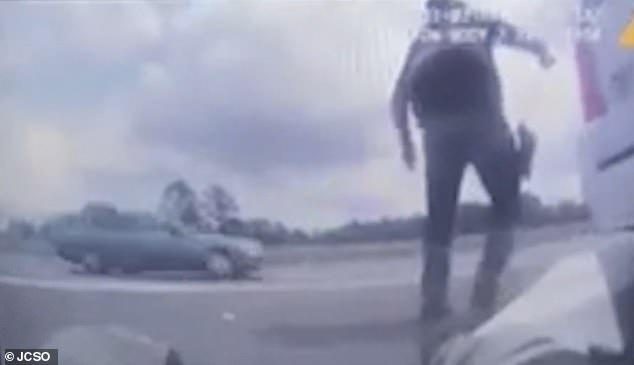 Jefferson County Sheriff’s Corporal Deanna Marshall, 33, was administered two doses of Narcan after she pulled over on the side of Interstate 65 to radio for help on March 27

‘I can control anything that I work with, but I couldn’t control this because it was something that alters your mind and body that I didn’t do to myself. It was a very helpless feeling.’

Marshall and other members of the Sheriff’s Neighborhood Enforcement Team (SNET) were sent to a Warrior area home after receiving tips that there was heroin, methamphetamine and fentanyl inside. Authorities were also searching for two people they wanted to question.

‘We were allowed access inside of the house and one of the suspects was there that we needed to talk to,’ she explained. ‘We saw paraphernalia and drugs in plain view and at that point we just did a walk through with the suspect with us.’ 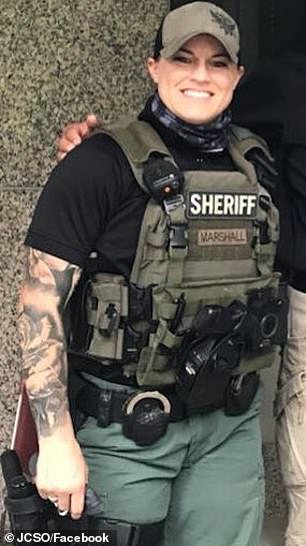 Marshall’s intense reaction was captured on her body camera

Marshall even found 7.2 grams of crystal meth, hidden in the floor vent of a bathroom where a woman had been taking a shower.

The deputy was responsible for collecting the drugs, and she wore gloves and a face mask as she collected the illicit items and placed them on a tray.

‘When I left, I felt like I was just overheated. There was no AC in the house, we hadn’t eaten lunch and we were in full gear. I didn’t really think anything about it.’

Marshall had been driving the woman suspect to the downtown jail when the inmate recommended that she take the Interstate to get to Birmingham faster.

The deputy struggled on her ride, eventually asking the suspect if there had been fentanyl inside the house.

‘She was like, “yes,” and I was stupid to even ask that question,’ Marshall explained. ‘At that point, I decided to radio it in. I pulled over on an exit ramp and radioed in that I felt like I was about to pass out.’ 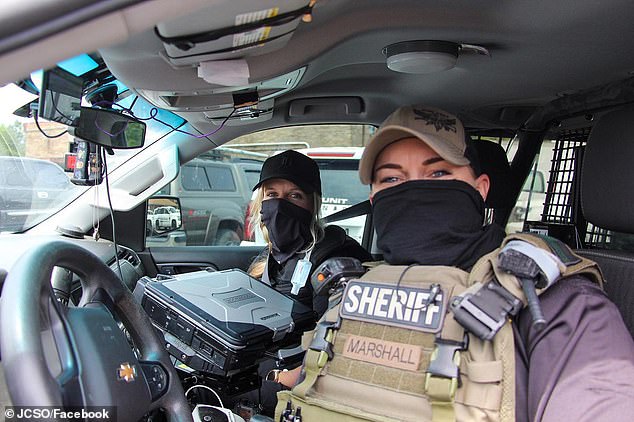 Marshall and other members of the Sheriff’s Neighborhood Enforcement Team (SNET) were sent to a Warrior area home after receiving tips that there was heroin, methamphetamine and fentanyl inside. Authorities were also searching for two people they wanted to question

Marshall’s reaction only got more intense as she spoke with the dispatcher and Sgt. Brandon Sunday, who was nearby and had just seen her patrol car on the interstate.

‘It was out of my control so then I began to panic, and my adrenalin was going which was accelerating it,’ she described.

Even the woman inside the patrol car tried calming the deputy down.

‘When she realized I was in full panic mode, I could hear her telling me to breathe, that it was OK and I was going to get through it,’ Marshall said. 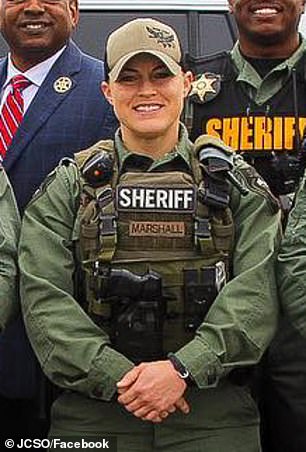 Marshall stayed on call with the dispatcher as her team arrived at the scene, with Cpl. Ryan Holley getting to her first.

‘He grabs me, and I start walking out and I’m yelling at him that I’m numb. He dragged me from the side of the Tahoe to behind the Tahoe to get me away from the traffic. I was laying in his lap and he had both of my hands. He was trying to get me to calm down.’

‘He was getting me to talk to him, to answer questions to distract me from the shock. I think it really did help. The right side of my body was locked up and my right hand was like a dinosaur hand. It was like when your foot falls asleep and it tingles and hurts and is numb. That was my whole body.’

It was then that deputies administered the life-saving nasal spray to Marshall.

Marshalls was taken to a local hospital, where she said that she also cried.

‘I felt fine, but I didn’t understand – that’s how quick Narcan can reverse it,’ Marshall said. ‘One of the paramedics even said, “Are you mad at us for killing your high? We’re so used to addicts getting mad at us for stopping it.” I was crying like, “Thank you for stopping that terrible feeling.”‘

‘It blows my mind why somebody would choose that. It’s actually very sad. It was something that I could not help. I was helpless and I’m not OK with being helpless.’

It is unclear to the deputy how she came into contact with the fentanyl, however.

‘I touched so many different things,’ she said.

But ultimately, Marshalls is thankful for her team for quickly coming to her rescue.

‘I was scared I was going to die right then. It was my boys that got me,’ she said. ‘They’re my brothers. It was teamwork, in a different way.’