Florida middle school student, 14, is suspended for 10 days after she clashed with teachers over her outfit when she was told she was ‘letting them hang out’ and accuses them of sexual harassment

By Adam Schrader For Dailymail.Com

A Florida middle school student who was suspended for 10 days after she clashed with teachers over her outfit has accused them of sexual harassment.

Alice Wagner, an eighth grader at Yulee Middle School, had a heated exchange over the dress code with school administrators after a teacher allegedly told the 14-year-old she was ‘letting my chest hang out,’ WJXT reported.

Wagner told the outlet that that she was leaving her classroom when the teacher, whose name was not revealed, suggested that her outfit was too revealing.

The young teen was wearing a white tank top underneath a long-sleeve gray cardigan sweater with a bohemian skirt. Wagner was allegedly told her undergarments could be seen but she claims her sweater made that impossible. 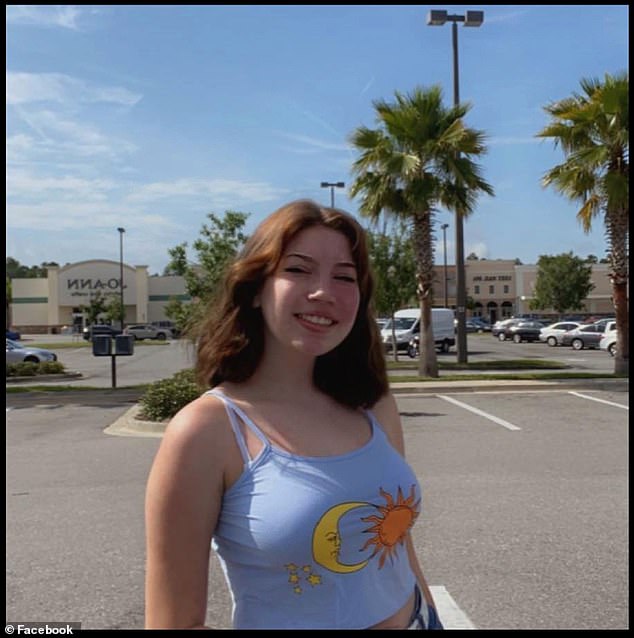 Alice Wagner, an eighth grader at Yulee Middle School, is pictured in an undated Facebook photo. This is not the outfit she was wearing when she was suspended

Alice Wagner, an eighth grader at Yulee Middle School, had a heated exchange over the dress code with school administrators

‘[The teacher] told me I was “letting them hang out for the whole world to see,” as I was exiting the classroom,’ Wagner told the outlet.

‘I went to the bathroom and I came back and I said, “You need to stop sexualizing 14-year-old girls.” I grabbed my stuff and I removed myself from the situation.’

Wagner then went to the administration office to call her parents but claims she was not allowed to make the call before she got into a heated debate with administrated which led to her suspension, she told the outlet.

In messages made online, Wagner said the comments from her teacher made her ‘feel very uncomfortable.’

She noted that she was suspended after she reacted in a way she ‘shouldn’t have’ towards the school’s assistant  principals, but did not detail what those were.

Her mother, Sarah Wagner, told WJXT that Wagner’s behavior went to far but claimed that her daughter was ‘basically sexually harassed by her teacher.’

‘I don’t think it’s okay for her to talk to teachers that way but I understand why she was angry. She was basically sexually harassed by her teacher,’ the mother said.

‘The teacher did apologize, she did understand what she did was wrong.’ 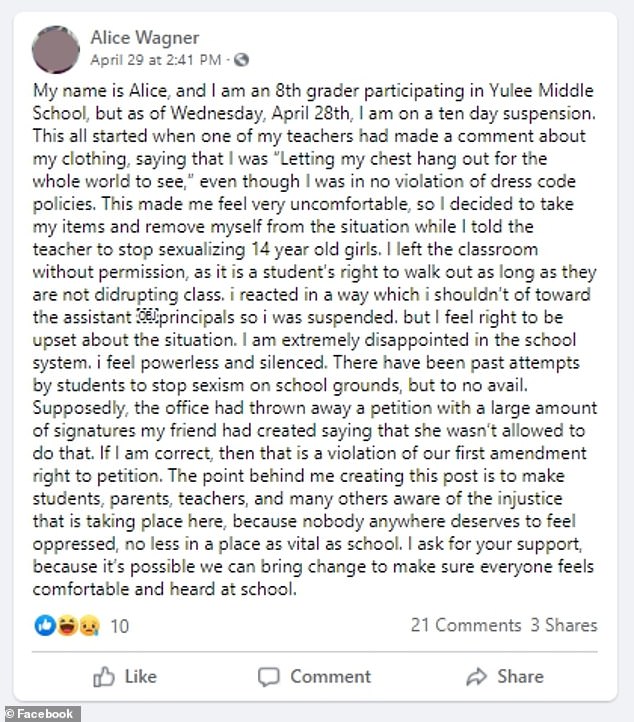 Wagner, 14, posted about the incident on Facebook and said it made her feel ‘very uncomfortable’

The young teen added that the situation has left her ‘extremely disappointed in the school system.’

‘I feel powerless and silenced,’ she said.

Wagner said that students have previously tried ‘to stop sexism on school grounds’ but ‘to no avail.’

The young teen said she wants ‘to make students, parents, teachers, and many others aware of the injustice that is taking place here, because nobody anywhere deserves to feel oppressed, no less in a place as vital as school.’

DailyMail.com has reached out to Sarah Wagner as well as the Nassau County School District, which oversees the school, for more information and additional comment.

The Nassau County School District has a dress code policy that bans clothing that reveals undergarments.