Brave Brit ex-soldiers and volunteers have begun arriving in Ukraine to fight with the crack international Georgian National Legion battling against Russian forces.

MailOnline revealed last week how dozens of ex British servicemen and resistance fighters were heading out following an appeal from Ukraine president Volodymr Zelensky for help in pushing back the unprovoked invasion.

Many are heading towards training camps set up by Mamuka Mamulashvili, commander of the Georgian National Legion, and who arranged for us to speak to two British men who have just arrived in the country.

Named only as Thomas and James, Mamuka explained how both had travelled to Ukraine after jetting into Poland last week and following several hours negotiating he allowed us to speak with them via telephone.

Thomas, 25, from London, said: ’I did four years with the British Army and have now left but a contact of mine in the forces suggested I get in touch with Mamuka as they were looking for men. 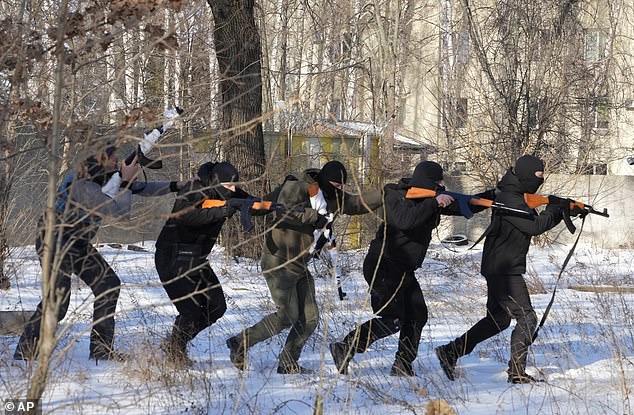 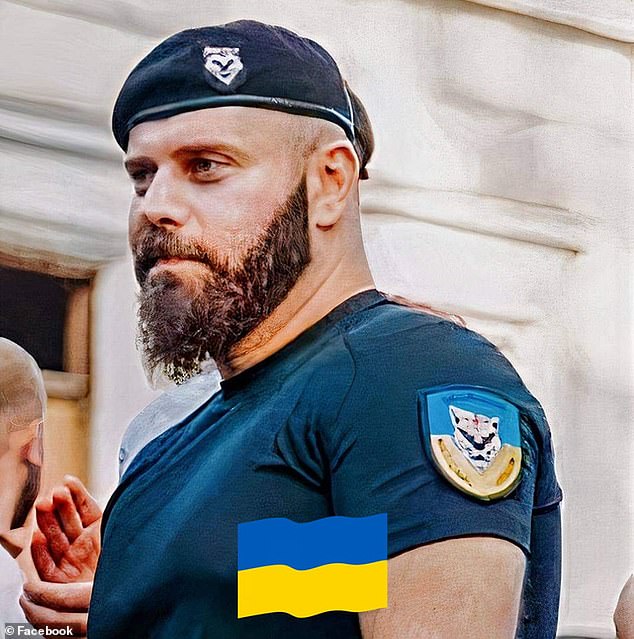 The training camps have been set up by Mamuka Mamulashvili (pictured), commander of the Georgian National Legion

‘I didn’t hesitate. I’ve got good experience, mainly peace keeping but the key thing is I have training and medical knowledge which is what you need in these situations.

‘The guy who put me in touch with Mamuka is well connected and when he told me about the Georgian Legion and what they were doing it was a no brainer.

‘The guys out here are very switched on and the training they are giving those with no experience is second to none – they have some good people out here, British and Americans ex Special Forces.

‘They all have different skill sets and are sharing their knowledge which is great for those guys who are arriving and don’t have any military experience.

‘I just want to help the Ukraine people in their fight against Russia. You can’t stand by and watch women and children being bombed mercilessly.’

However Thomas had a word of warning for those tempted to travel to Ukraine and fight ‘just for the thrill of it’.

He said: ’My advice to them is stay at home and do some humanitarian work back in Britain, you can help in other ways, there is no point coming out here and probably getting yourself killed.

‘It’s not Call of Duty out here, this is real and the Russians aren’t screen graphics, they have guns and are quite prepared to shoot and kill.’

However James, 22, from Manchester, who was a warehouseman until he lost his job last month, admitted he had no military background but had felt a ‘sense of duty to help’. Named only as Thomas and James, Mamuka explained how both had travelled to Ukraine after jetting into Poland last week and following several hours negotiating he allowed us to speak with them via telephone

He added: ’Ok, I don’t have any experience but Mamuka has offered to train me and the instructors here are very good.

‘They are not going to just give me a gun and send me to the front line – they are going to teach me tactics, how to use a weapon and how to stay alive because I’d like to get back to Manchester alive.

‘As Thomas said, the instructors here are the best, they are from Britain and the US so language is not a problem, I can listen and learn.

‘Like lots of people at home I was just watching all this horror unfold on the news and wanted to help. I heard they were looking for people to fight so I decided to come out here.

‘I’m young, fit, I’ve got my arms and legs and so why not help out ? My life wasn’t really going anywhere in the UK so I flew out here and made my way to the Legion HQ.

‘The Ukrainian border guards pointed me in the right direction and that’s where I met up with Thomas and some of the other Brit guys.

‘I appreciate it could be a death sentence for me but I am very, very serious about doing something to help and the training I’m getting will hopefully help me to stay alive.

‘I’ve only been here a few days but it’s pretty intense and we are all just cracking on with it. My family know what I am doing and of course they are worried but they are proud of me as well.

‘When you see families being slaughtered like animals you have got to get out and help.’ 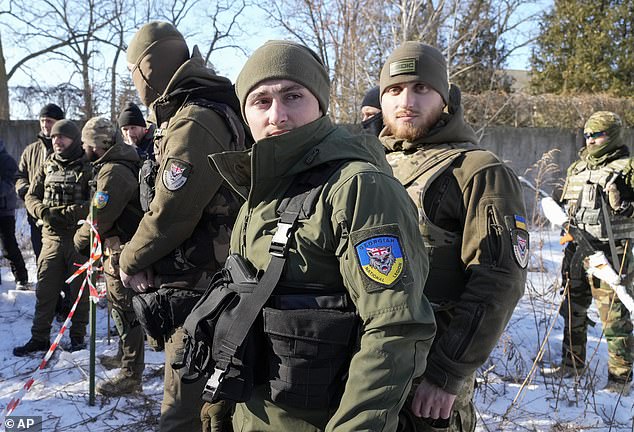 Commander Mamuka told MailOnline: ’I have three bases across Ukraine where I am training foreign fighters and those who want to come are welcome to make themselves known at the border.

‘The guards have instructions for people who want to reach us and we will give them training when they arrive if they have no military experience.

‘I have many guys from Britain, some have fought with me before and some who are new like Thomas and James but we are ready to take on more.

‘We are receiving help and men from many countries but we need more to ensure the freedom of Ukraine.

‘If people want to join us in a battle for democracy against military authoritarianism.’

Commander Mamuka, who has been fighting the Russians since they invaded Georgia in 2008 and set up his resistance movement as a result, added: ’We have to take on Putin. He is threatening world security not just European security.

‘Everyone saw what Russia did in Georgia and now we are seeing the same thing happening in Ukraine.

‘We must all help to try and stop it and defend Ukraine and it’s people – who are being killed as I speak with you.

‘What we need is a no fly zone over Ukraine. That’s the only way to help the country and its people because the Russian aggressors are killing innocent civilians.’