A female boxer who was disfigured after losing a gruesome 10-round bout says the horrific facial injury has left her with ‘eyes bigger than her boobs’.

Aussie school teacher, Ebanie Bridges, who is known as the ‘Blonde Bomber’ in the ring, lost her first professional fight on Saturday after going head-to-head with Shannon Courtenay for the world champion title.

Despite a dominant start to the fight, the 34-year-old Sydney-based math teacher couldn’t compete after the pair accidentally clashed heads in the fifth round, leaving Bridges with a gruesome haematoma injury on her right eye.

The massive knock turned Bridges’ eyelid purple and swollen, but despite the outcome of the intense showdown, the fighter remained in high-spirits after the match. 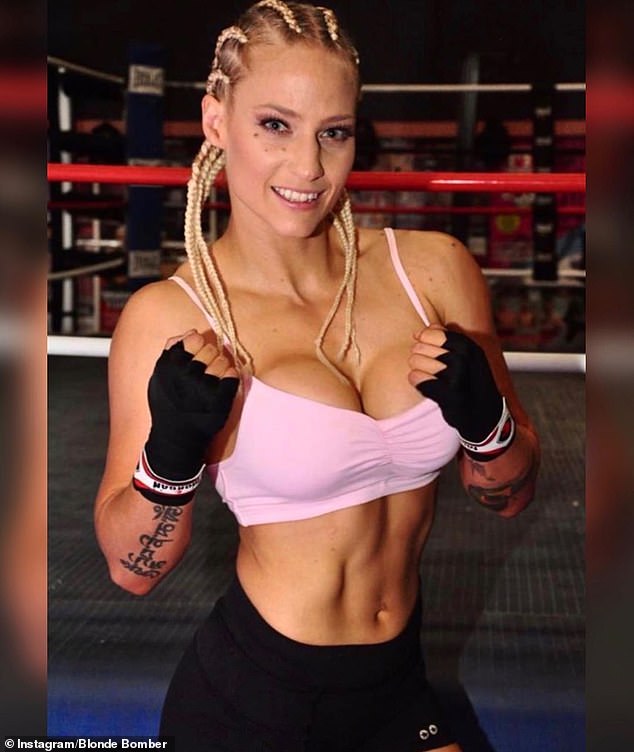 Aussie school teacher, Ebanie Bridges (pictured) says her ‘eyes are bigger than her boobs’ after being struck in the face during her world championship fight against Shannon Courtenay on Saturday 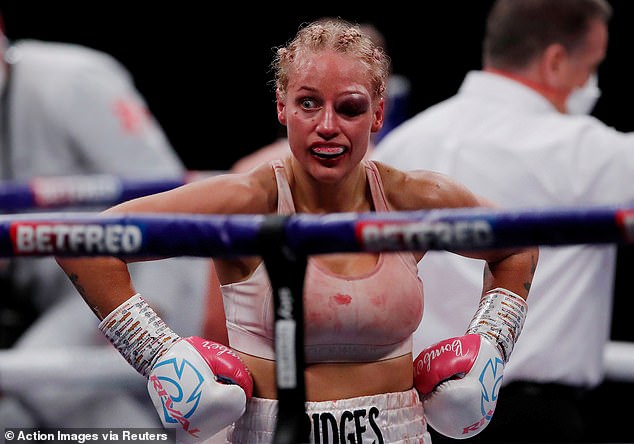 The female boxer, known for using her good looks to try to lure more fans into the sport, was left disfigured after losing in a gruesome 10-round bout

‘What a war – blood, guts and heart. Not a pretty face anymore. My eyes are bigger than my boobs,’ she wrote on social media.

‘I love fighting. I enjoy every bit of it. What can I say? I didn’t get the W, but I fought my heart out. I couldn’t see for the last three rounds, but I have no quit in me!

‘Congrats to Shanny. It takes two to tango, and I hope we did what I said we would. I showed that pretty girls fight hard too! I hope it was entertaining for everyone.’

The Australian sports star just fell short of taking home the title, with outraged fans flocking online to claim the judges’ scorecards were too harsh.

Although starting out strong, she became briefly rattled after Courtenay delivered a brutal blow to the side of her head during the fifth round, which was initially reported as the cause of her injury.

When Bridges walked out for the start of the eighth round, the crowd was shocked to see her entire eye had swollen and almost entirely closed over. 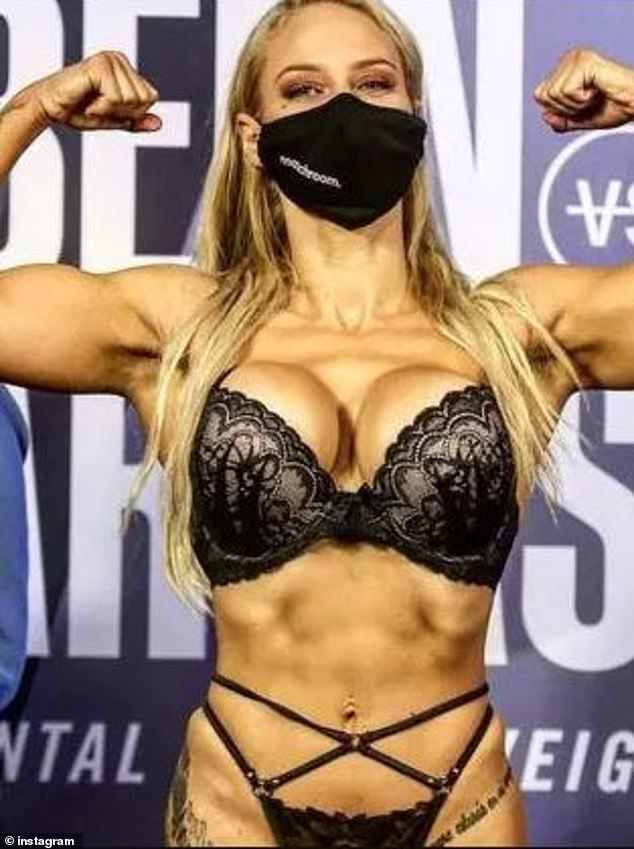 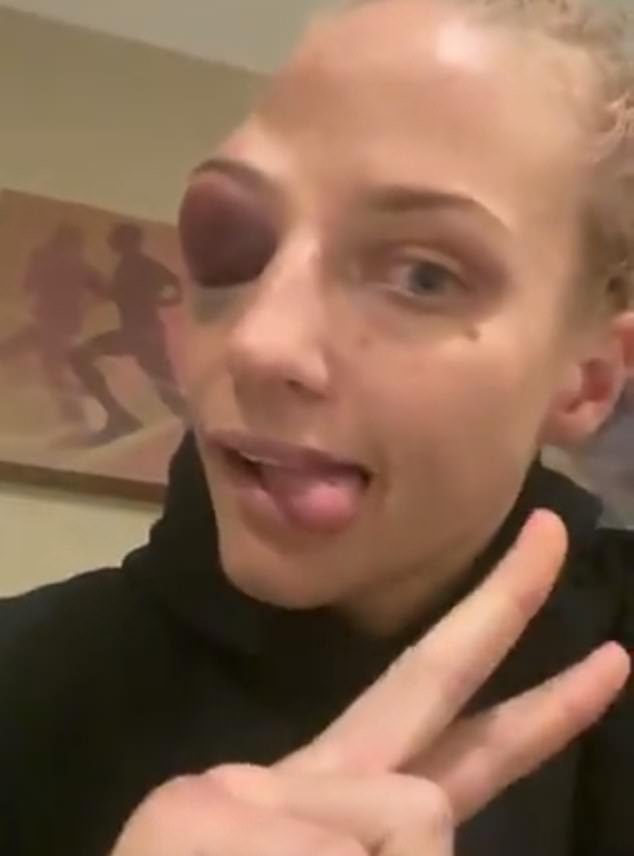 Bridges updated fans on her injury in a video on Sunday (pictured), which showed her eye still extremely enlarged

She admitted she couldn’t see out of the eye, but her corner controversially agreed to let her finish the 10-round fight.

Bridges continued to cop blow after blow to her head but never stopped trying to take down Courtenay.

On Sunday, she posted a video online of her eye, still extremely enlarged and blackened, jokingly writing alongside it: ‘No modelling for a few days’.

After the match critics said Bridges undoubtedly proved herself as a legitimate world title contender and commended her bravery in finishing the fight.

Courtenay was unanimously declared the winner (97-94, 98-92) but Bridges won’t be easily forgotten by the judging panel as she begins preparations for her next bout.

The fight, which was on the undercard of the Conor Benn vs Samuel Vargas match in the UK, was heavily promoted in the lead up.

Matchroom Boxing’s Eddie Hearn said Bridges succeeded in living up to the hype she had created through her bold behind-the-scenes jabs at her opponent. 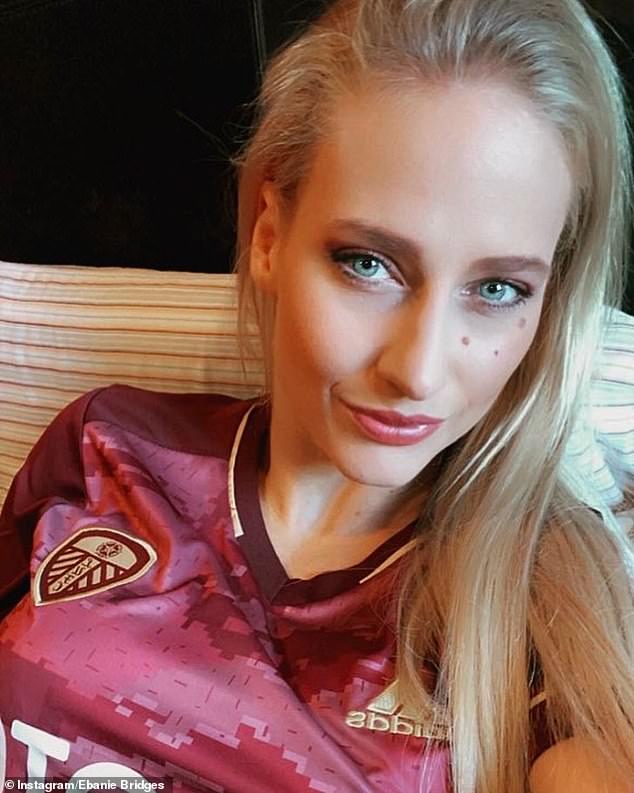 After the match, critics said Bridges undoubtedly proved herself as a legitimate world title contender and commended her bravery in finishing the fight 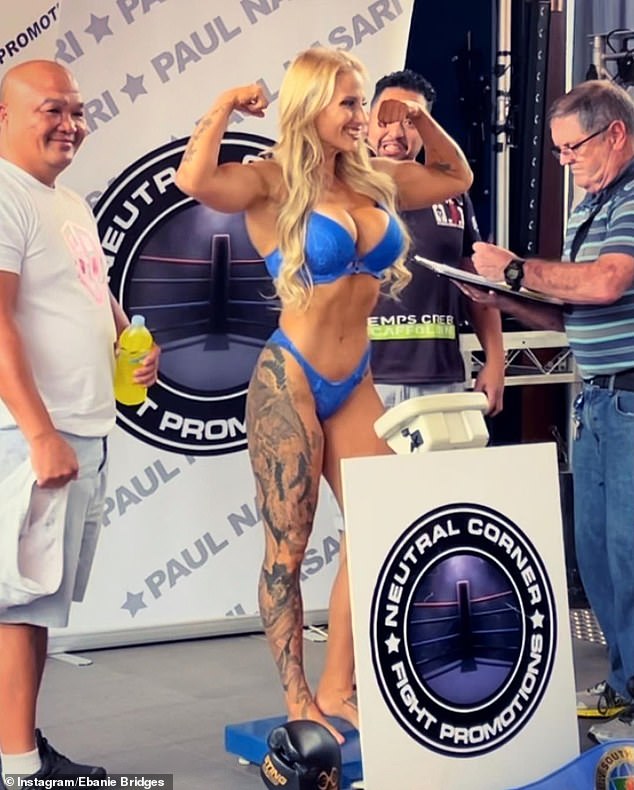 Bridges, who goes by the ‘Blonde Bomber’ while boxing, argued her lingerie is simply another ploy to draw viewers into the game

‘Great advert for women’s boxing because we know it’s had a massive build-up – probably the biggest build-up I’ve been involved with in a female fight – but if it doesn’t deliver, it’s no good for anyone,’ he said.

‘It was brilliant from start to finish.’

Bridges antagonised her opposition by arriving at the weigh-ins on Saturday wearing lacy black lingerie to showcase her ripped physique.

Her blonde hair was worn loosely as she posed proudly when her 117 pound (53kg) weight was announced.

Later, Bridges gifted her English opposition a pair of her own father’s underwear, a reference to the fact that Courtenay would not also wear lingerie in promos.

Bridges argued her lingerie is simply another ploy to draw viewers into the game.

‘Let’s be real. If I wore what everyone else wore, people wouldn’t be interested. I’d just be another fight. Whatever,’ she previously told Sky Sports.

‘I’m trying to bring more eyes to the sport. You can criticise me as much as you like. But if I looked plain then you wouldn’t even know this fight was happening.

‘People will tune in to see if this girl wearing lingerie can actually fight, or is she just a model? The thing is; me and Shannon can really fight.’ 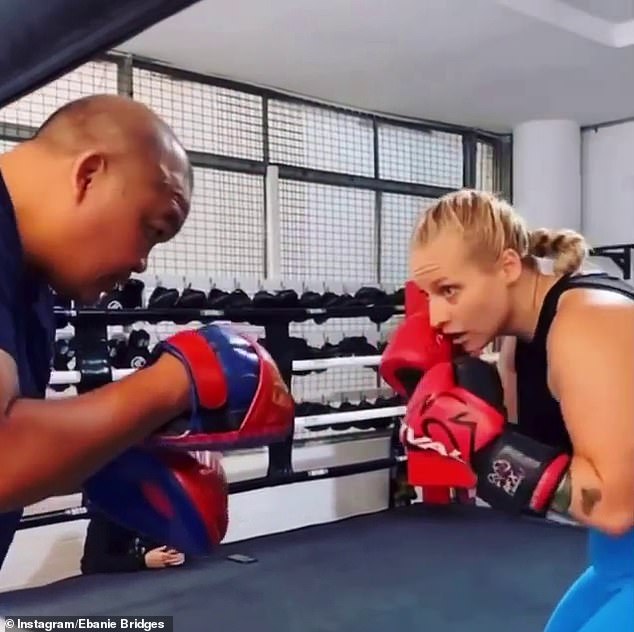