Britain’s miserable start to spring could finally be set to change as the sun will come out on Sunday after another two days of snow, hail and rain.

Large swathes of the country can expect daytime showers throughout Friday before it begins to clear later this evening with some late spells of sun.

Overnight will be mostly dry with patches of mist and fog across north-east Scotland. But in the south-west there will be thick cloud bringing rain which will be heavy for the area by dawn.

Yet Sunday will be the day to stoke the barbecue as temperatures rocket to 72F (22C) due to a plume of ‘sub-tropical air’. Sunseekers will have to dodge outbreaks of rain and scattered showers in some parts.

The heat will be in sharp contrast to the mitten-wearing weather seen over the past week as snow caused chaos across large parts of Scotland and northern England following a -5C freeze the night before. 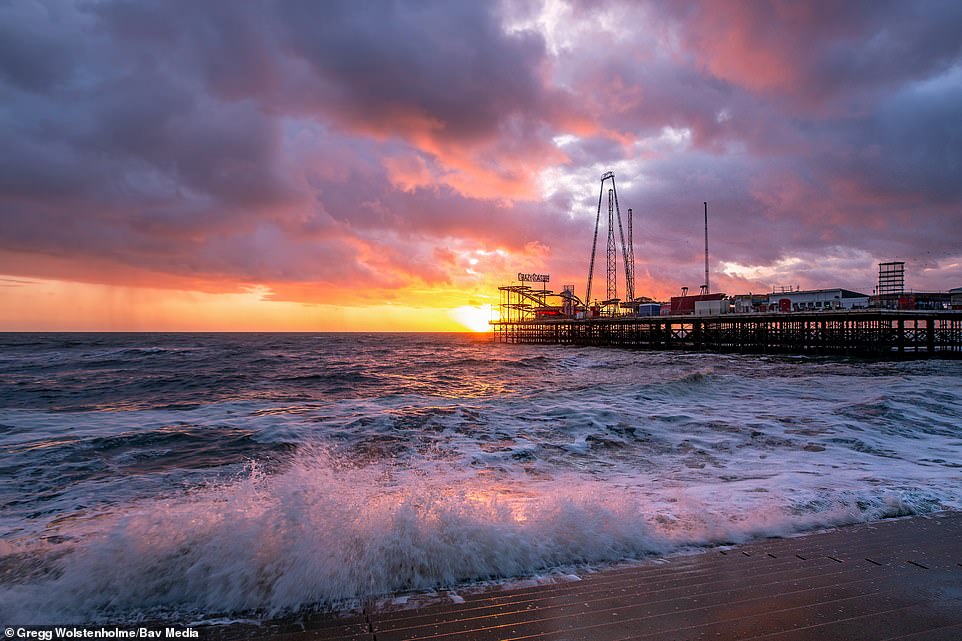 Large swathes of the country can expect daytime showers throughout Friday before it begins to clear later this evening with some late spells of sun. Pictured: Blackpool last night 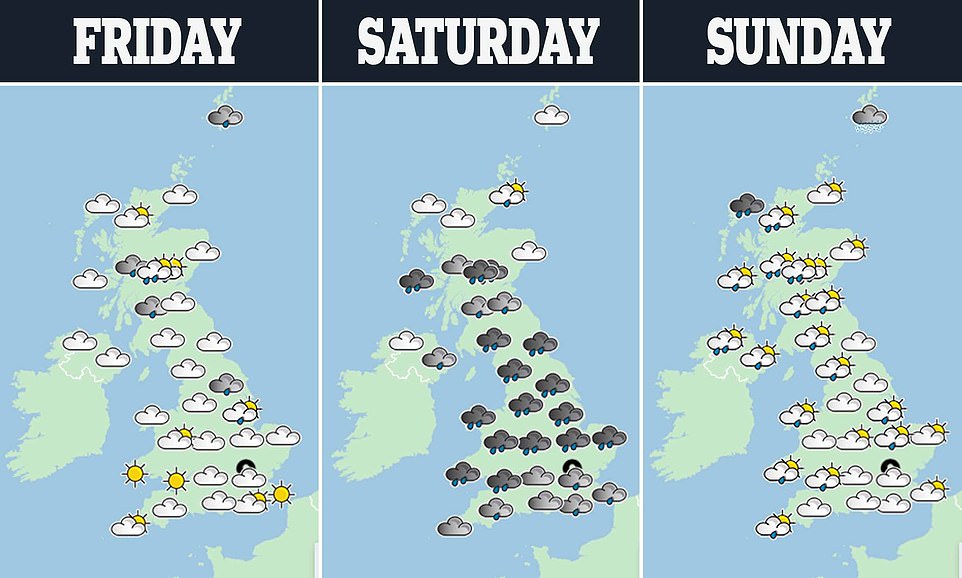 The Met Office’s Nicola Maxey said: ‘Temperatures are rising during the day and, even if they’re not rising to what we expect in April and May, they are warm enough to melt snow.’

The meteorologist said the sun is also quite strong at this time of year, meaning some people are suffering sunburn on clear days even though it feels quite close.

She said more snow and hail showers could be expected on Friday, but temperatures will rise at the weekend when a cold air mass is nudged out of the way by a warmer system from the Atlantic.

But Ms Maxey said the weather will be ‘giving with one hand and taking with the other’ as this system will bring wind and rain on Saturday.

She said: ‘At the weekend we’ve got one of these low pressure systems coming in which pushes the high pressure out of the way and allows the temperatures to rise a bit but brings some wet and windy weather.

‘It pushes in from the South West on Saturday morning and by Saturday evening it will have reached as far as the north of Scotland.

‘You will see temperatures pushing up a bit then and returning more to normal with the South East potentially seeing temperatures as high as 20C just for Saturday.

‘But we’ll see some rain and breezy conditions and some of that rain could be quite heavy.’ Ms Maxey said places like Dartmoor could see as much as 70mm of rain in the 24 hours to Saturday. 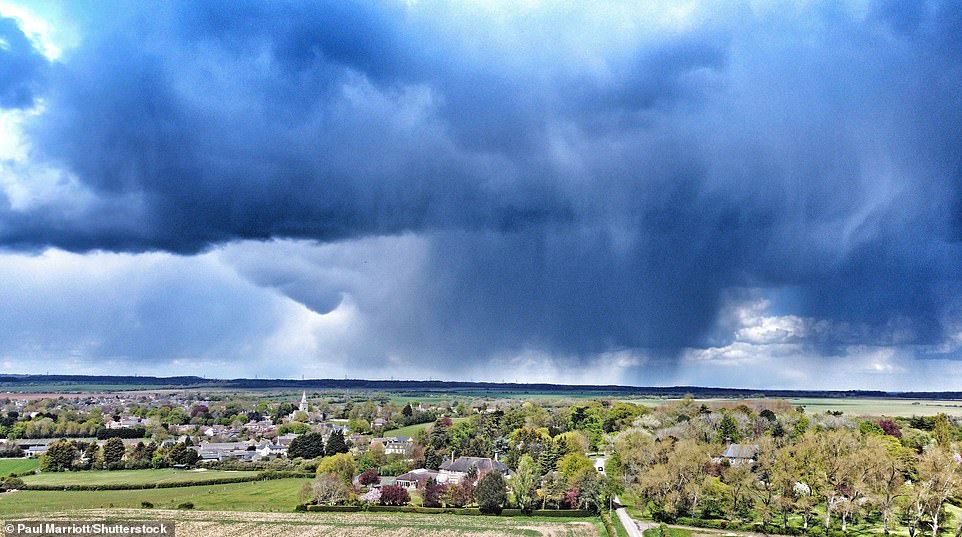 Overnight will be mostly dry with patches of mist and fog across north-east Scotland. But in the south-west there will be thick cloud bringing rain which will be heavy for the area by dawn. Pictured: Peterborough yesterday 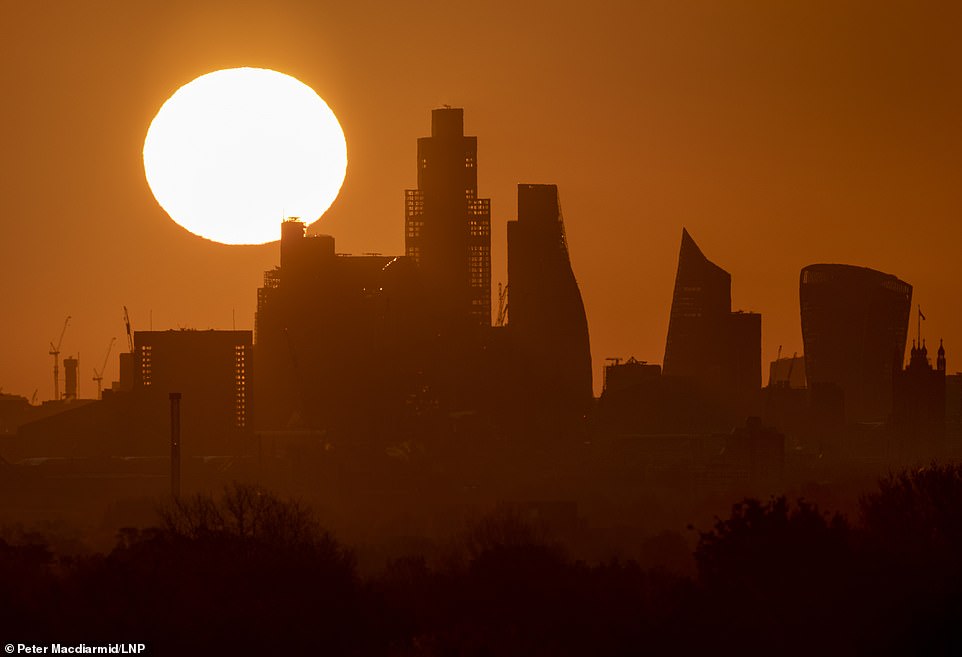 Sunday will be the day to stoke the barbecue as temperatures rocket to 72F (22C) due to a plume of ‘sub-tropical air’. Sunseekers will have to dodge outbreaks of rain and scattered showers in some parts. Pictured: London this morning

The Met Office said yesterday most of the snow in northern England was on the highest ground and did not settle lower down, though there were reports of some showers at low levels, including in Gateshead.

Ms Maxey said snowfall was not that unusual in England in May, with some as recently as last year, but lying snow was much more uncommon for the time of year.

The last time snow accumulated in any quantity at this time in May was in 1997, when several centimetres settled in Scotland, Wales and northern England.

Ms Maxey said: ‘Through spring you get these swings in weather types. So it’s not unusual to see a cold snap through April and May.

‘During those cold snaps you potentially see a bit of falling snow but generally over higher ground and generally in the north.’ She said snow settling was much more rare as the ground is warming up, even if it does not feel like it.

It gave skiers in some areas of the country ideal conditions to return to the slopes today after a winter of lockdown. 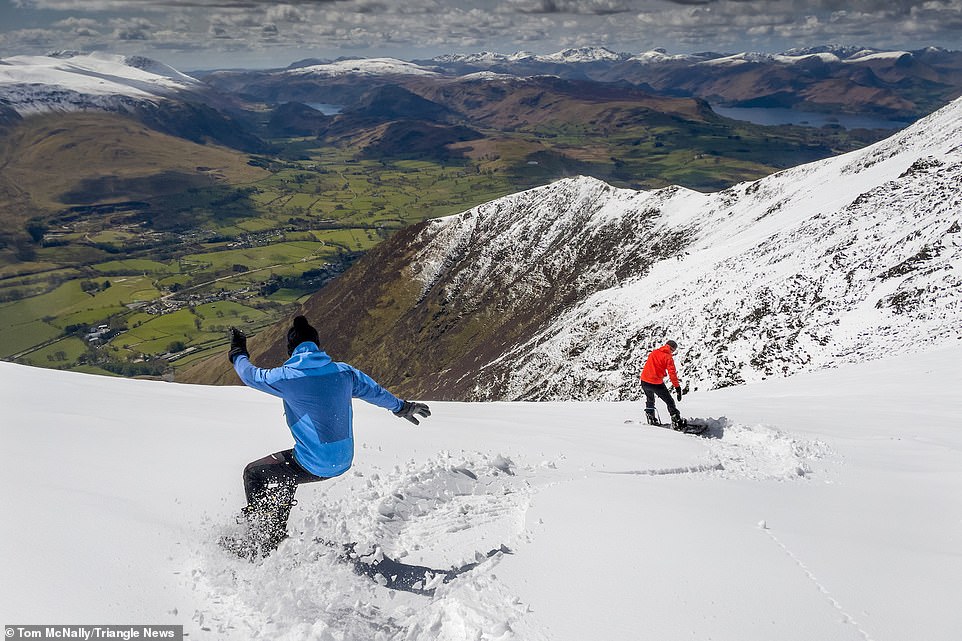 Snowboarders Kev Dunnabie and Rob Richardson on Blencathra in the Lake District enjoy the unusual May conditions (pictured, yesterday) 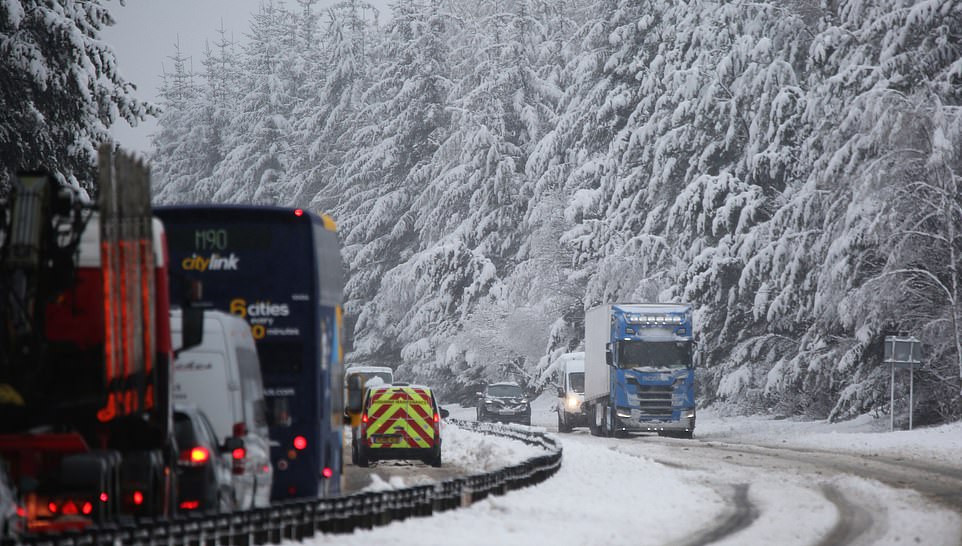 He said about 40 people used the tow on Raise, near Helvellyn, to get to the top on the slope yesterday, when there were blue skies and views as far as Scotland, as well as deep snow.

The snow started to fall on Tuesday and was still coming down on today, although visibility had got worse, Mr Sweeney said.

He added: ‘I haven’t seen snow at this time of year before, but I was speaking to some other members who said there was snow in June in 1963, although that was a very unusual year for weather.’

For many of the club’s 370 members, including Mr Sweeney, 64, who lives in Lancaster, the snow gave them the chance for their first ski of the season because of lockdown restrictions.

After spending Wednesday on the slopes, he said he and fellow skiers braved hailstones for an apres-ski pint in the beer garden of the Travellers Rest pub. 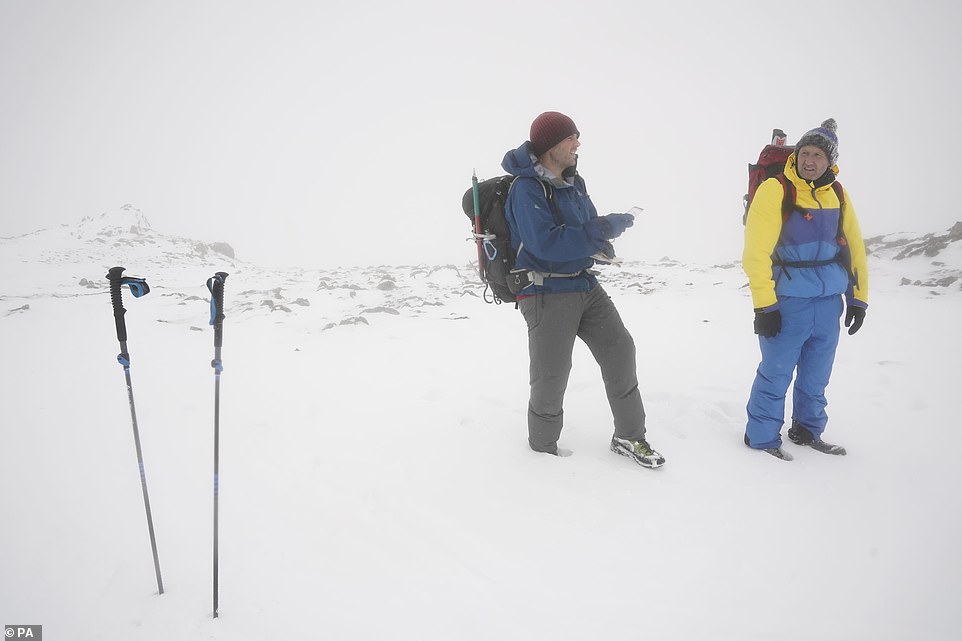 Two skiers stand in the snow at the Lake District Ski Club on Raise, next to Helvellyn in the Lake District National Park, after an unseasonal May snowfall allowed the reopening of the slopes (pictured yesterday) 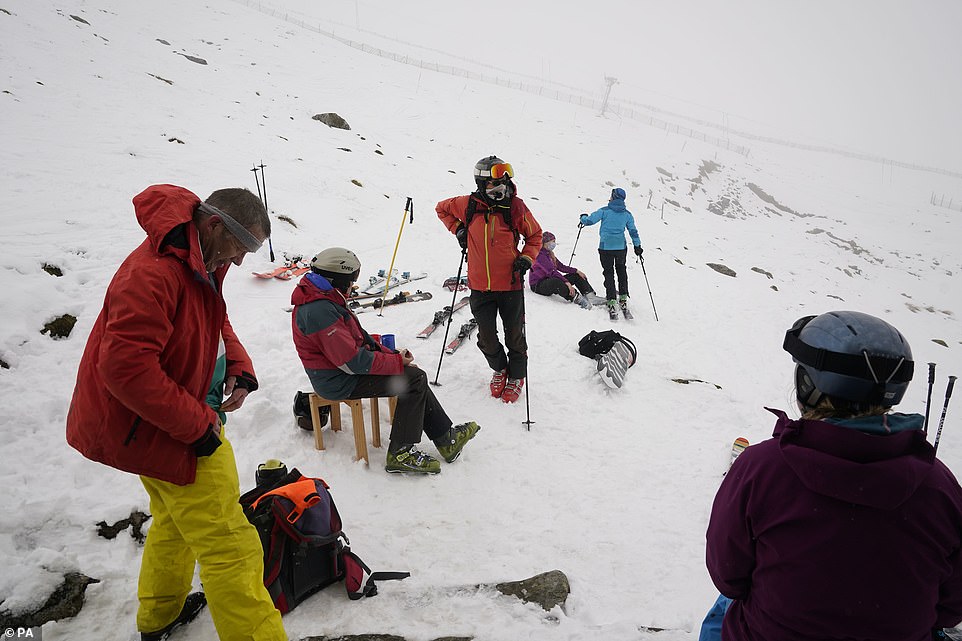 Former president of the club and assistant hut warden Gerard Unthank, 80, said: ‘It’s very unusual to get the snow at this time but we’re very pleased to get the opportunity.

‘People are very enthusiastic and excited and it’s been wonderful. Up here we rely on drifts and have snow fences because we don’t get a great depth of snow, but some of the drifts today are as high as the fences.’

Mr Unthank said there are still Covid restrictions in place in the club’s hut to ensure social distancing.

He said: ‘We came up here for one or two days in November and then lockdown restrictions came in so we weren’t able to.

‘We’ve been looking at all the snow reports while we’ve been in lockdown and we have had quite a bit of snow this year.’

The club was founded in 1936 and operates a 360-metre button tow, about an hour’s walk from Glenridding, to give access to the mountain.