A bewildered driver has told of his wild ride with Jarryd Hayne after the footballer rolled out of a pub and paid $100 for a lift to the police station.

Comedian and presenter Jon-Bernard Kairouz has provided a stunning insight into the one-time football star’s jovial behaviour while he awaited trial on rape charges.

Mr Kairouz told Daily Mail Australia he was sitting in the car when Hayne burst out of the St George Hotel in Kingsgrove about 2pm one afternoon in October 2019.

Hayne, 33, asked the young man if he could drive him some 30km to Castle Hill Police Station where the footballer was required to report for bail.

During the bizarre trip, Hayne slapped his thigh singing karaoke, protested his innocence of his rape charges and expressed fear about catching cabs and Ubers.

‘I was just picking up some food from my grandmother’s place and he just pulled out of the pub,’ Mr Kairouz recalled.

‘He’s walked around the car and e said, “listen mate, here’s a hundred bucks, can you drive me to Castle Hill Police Station. 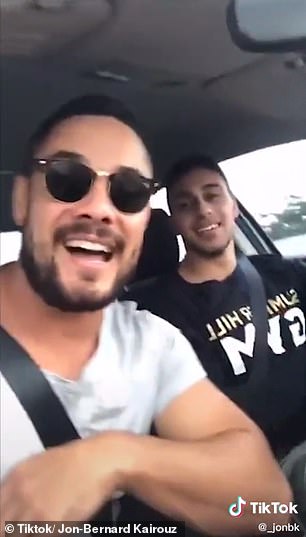 During the lengthy trip, Mr Kairouz said Hayne proclaimed he was innocent of the charges against him.

‘We chatted about it in the car. He was kind of all over the place because he was intoxicated.

‘He was a bit on edge. He was talking on Viber, he was FaceTiming people on Viber in the car,’ Mr Kairouz recalled.

‘(Hayne) didn’t want to get in an Uber or taxi. He was saying he can’t trust them. It was very strange.’

A female taxi driver played a critical role in Hayne’s sexual assault incident with the young woman from Newcastle in 2018.

Hayne was driven to the woman’s home on the city’s outskirts after offering the driver $500 to take all the way from Newcastle back to Sydney.

Hayne’s victim was infuriated when she realised the footballer – up the coast on a buck’s weekend – had left the cab running out the front, ready for his departure.

She alleged – in claims supported by a jury – that he then went on to sexually assault her.

Hayne told the District Court he wanted to ‘please her’ – and did so orally and digitally – but they did not have sexual intercourse.

The victim told Hayne in a later text: ‘I know I’ve talked about sex and stuff so much but I didn’t want to do that after knowing the taxi was waiting for you.’ 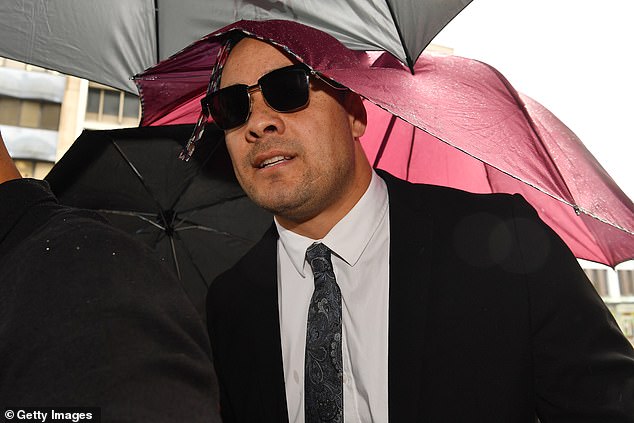 Last steps as a free man: Hayne is seen entering court on Thursday where he was sentenced to a maximum jail term of five years and nine months

Hayne married Amellia Bonnici on the NSW Central Coast earlier this year. She cried as his sentence was revealed on Thursday

Hayne was jailed for up to five years and nine months on Thursday, shortly after telling the court he ‘didn’t do it.’

Judge Syme said Hayne ‘refused to accept the verdict, shows no remorse and refuses to change his attitude towards sex or women’ in a damning indictment of the former Parramatta Eels captain.

‘I have found the offender was fully aware that the victim was not consenting and went ahead anyway,’ Judge Syme said.

Hayne’s lawyers are appealing the sentence. Pending that decision by a panel of judges, he will be eligible for parole in three years and eight months.

His one-time car-buddy, Mr Kairouz, posted a video clip of the pair singing this week.

1988: Jarryd Hayne is born in Sydney, the son of Manoa Thompson and Jodie Hayne.

2006: Hayne makes his NRL debut for the Parramatta Eels aged 18 against the Penrith Panthers.

2007: The speedster makes his representative debut for New South Wales and Australia.

2008: He signs a $2million extension with Parramatta.

2008: Hayne was shot by a bikie gang member during a night out in Sydney’s Kings Cross, an event he said was a turning point in his life.

2008: After missing out on a place in the Kangaroos World Cup squad he plays for Fiji, later turning to religion.

2009: The star fullback leads the Eels to the NRL Grand Final and wins his first Dally M Medal.

2014: He announces his departure from rugby league to attempt a career in the NFL.

2015: Hayne signs a three-year contract for US$1.58million with the San Francisco 49ers.

2015: Hayne is accused of raping a virgin during a night out in San Jose, California – an allegation Hayne denies.

2016: He retires from the NFL and joins the Fiji rugby sevens team in the hopes of making the 2016 Rio Olympics.

2016: Hayne returns to the NRL signing with the Gold Coast Titans on a million-dollar contract.

2018: He signs with the Parramatta Eels on a cheaper-than-usual contract.

2018: Hayne is charged with aggravated sexual assault relating to an alleged incident on Grand Final night in the Hunter region.