With a beautiful coastline that stretches for more than 1,000 miles and home to picturesque towns and cities, Croatia makes for a perfect holiday destination, whatever the time of year.

Even during the busiest months, Croatia’s huge number of islands means nowhere feels totally overrun. Brac and Losinj are great options for families, with good beaches and pleasingly unspoilt inland. Cavtat, on the mainland south of Dubrovnik, makes for a romantic week. 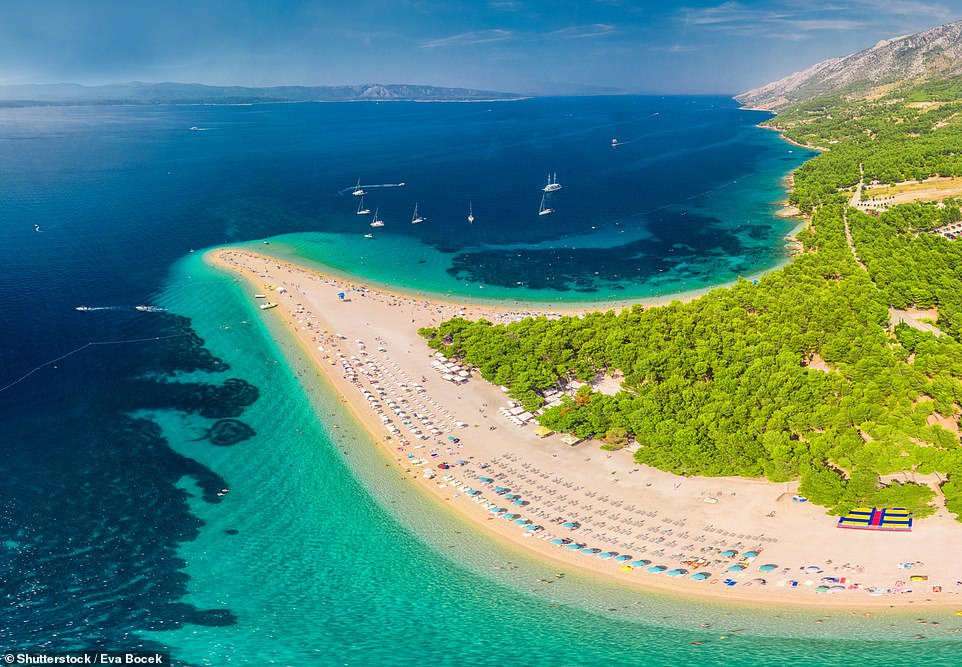 Spellbinding: Zlatni Rat beach in Brac is a long, golden sandbar that stretches out into the sea

Losinj: One of Croatia’s loveliest islands, Losinj is best for active families, with diving, watersports and cycling all on offer, as well as more white-knuckle options, including parachuting and rock-climbing (visitlosinj.hr). There are surf and dive schools on Cikat beach, while the lush and shady Cikat Forest Park is a gentle place to cycle or walk.

Younger families will love Veli Zal, a shallow shingle beach with loungers – for lunch, eat delicious pizzas overlooking the water at Restaurant Veli Zal. Linked to Losinj by a short road bridge, the neighbouring island of Cres is also worth exploring, with walking trails through the Tramuntana Forest and a quiet beach at Sveti Ivan.

A week’s B&B at Hotel Bellevue costs from £955pp, including flights and transfers (completelycroatia.co.uk).

Brac: It may not be as green and lush as Losinj, but Brac boasts the country’s most beautiful beaches, in particular Zlatni Rat – a long, golden sandbar that stretches out into the sea and changes shape according to the tide and wind.

In Supetar, the port and main town, you’ll find a charming cluster of waterside restaurants – bag a table on the terrace at Palute and watch the fishing boats come and go.

Most holiday accommodation is in the resort of Bol, but it’s worth having a car to explore the island’s interior, which is delightfully unspoilt.

A week’s B&B at Gava Waterman Milna Resort costs from £782pp, including flights and transfers (jet2.com).

Cavtat: Hidden away between pine forests, the pretty and small town of Cavtat dates back to Roman times but now boasts a buzzy waterfront dotted with restaurants and bars.

The best beach is in front of the Albatros hotel, ten minutes’ walk from the centre, but there are regular boat taxis to nearby coves as well as regular 40-minute crossings to Dubrovnik.

The town really comes alive from late afternoon. Settle in to watch the sunset at Beach Bar Little Star – a simple shack tucked away among pine trees – before strolling to the nearby Leut for dinner, which has been run by the Babic family for the past 50 years (restaurant-leut.com).

A week’s B&B at Hotel Croatia costs from £760pp, including flights and transfers (balkanholidays.co.uk).

When the blazing summer heat has faded, autumn allows for a relaxing break to discover Croatia beyond the beaches, from the foodie trails that loop through the northern region of Istria, to the glorious national parks of Plitvice and Krka and the charming wine region of Konavle. 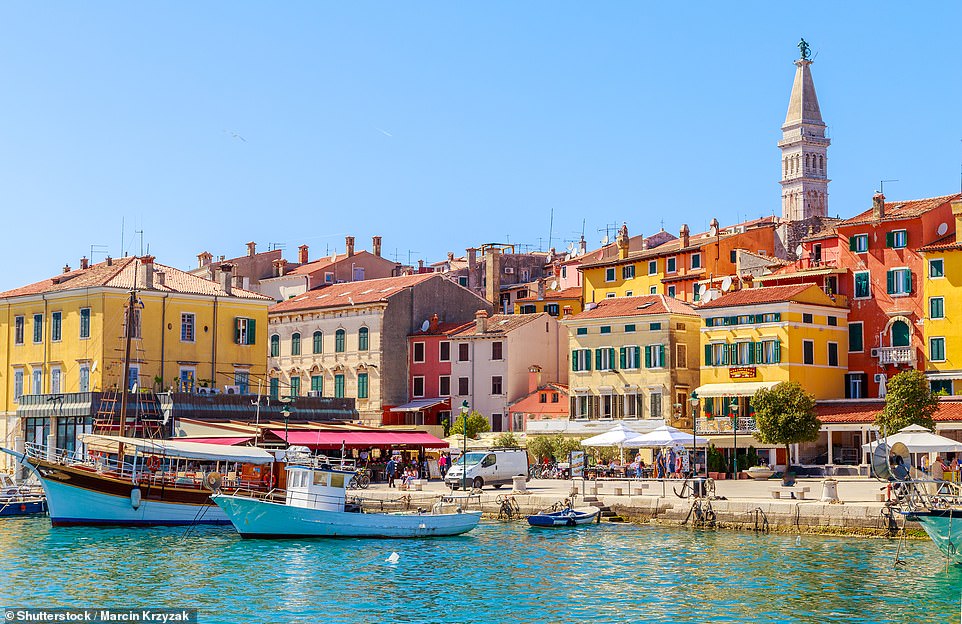 Charming: Rovinj in Istria, pictured above, looks a lot like Italy with its cobbled streets and colourful houses

Istria: Part of Italy until 1945, the vineyard-clad hills of inland Istria that roll out between picturesque hilltop towns are strongly reminiscent of Tuscany.

Motovun and Groznjan are particularly worth visiting. At this time of year the fields are busy with olive and grape harvests. Follow one of the well-marked wine routes (istra.hr) or book a truffle-hunting tour (trufflehuntingcroatia.com).

Combine time inland with a few days on the coast. Rovinj is a miniature Dubrovnik, its old town encircled by walls that jut out into the sea, while Pula is most famous for its spectacular Roman amphitheatre. Foodies should book a table at Monte, Rovinj’s most elegant restaurant which holds the region’s only Michelin star (monte.hr).

Konavle: Walkers and wine-lovers should head to Konavle, where vineyards and sleepy villages roll south from Dubrovnik to the Montenegro border.

There are slivers of beach at Cavtat and Molunat, but you’ll really want to explore this region on foot, stopping off for wine-tastings and lunch at the famous Konavoski Dvori restaurant (esculaprestaurants.com).

Drop into the Brajkovic Winery (opg-brajkovic.hr) to sample Malvasia, a classic Croatian white wine, and its own olive oil.

A week at Duka, a one-bedroom villa with private pool, costs from £550, excluding flights (vintagetravel.co.uk). 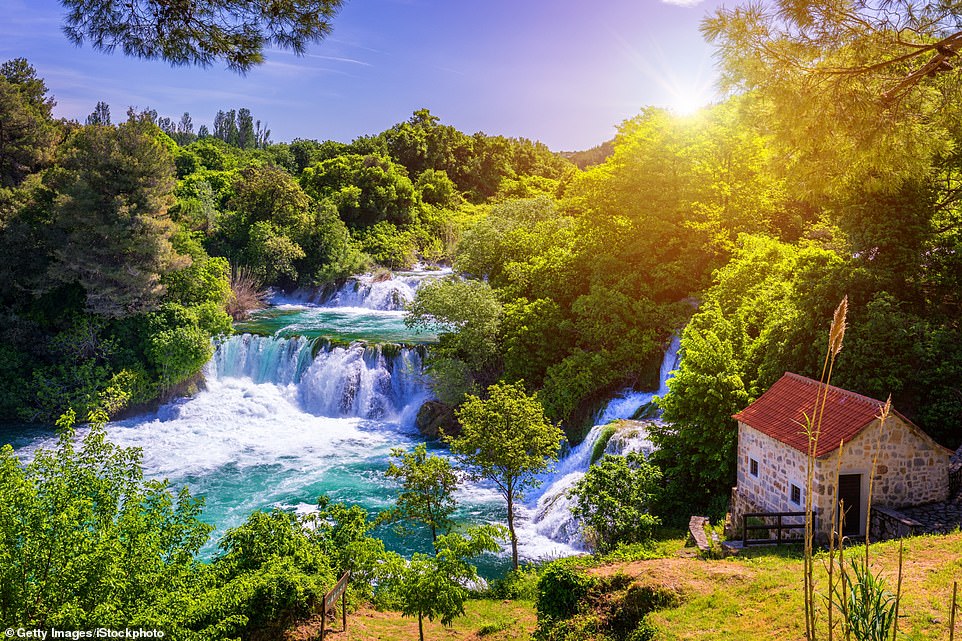 Golden glow: Krka National Park is latticed with walking and hiking trails and famous for its seven waterfalls

Plitvice and Krka National Parks: Croatia may be known for its stunning coastline but the Plitvice National Park – two hours inland from Split – is one of Europe’s most beautiful landscapes.

Cascading down a hillside is a vast network of 16 terraced lakes and waterfalls that are coloured emerald-green by naturally occurring minerals.

Krka, closer to the coast, is famous for its seven waterfalls. Both parks are latticed with walking and hiking trails that are at their most beautiful in autumn.

A two-week self-drive tour, including nights at Plitvice and Krka, costs from £995pp, including transfers and car hire (responsibletravel.com).

The coldest months are the best time to visit Croatia’s cities, from the snow-lined streets of Zagreb to Split’s spectacular Roman sites. 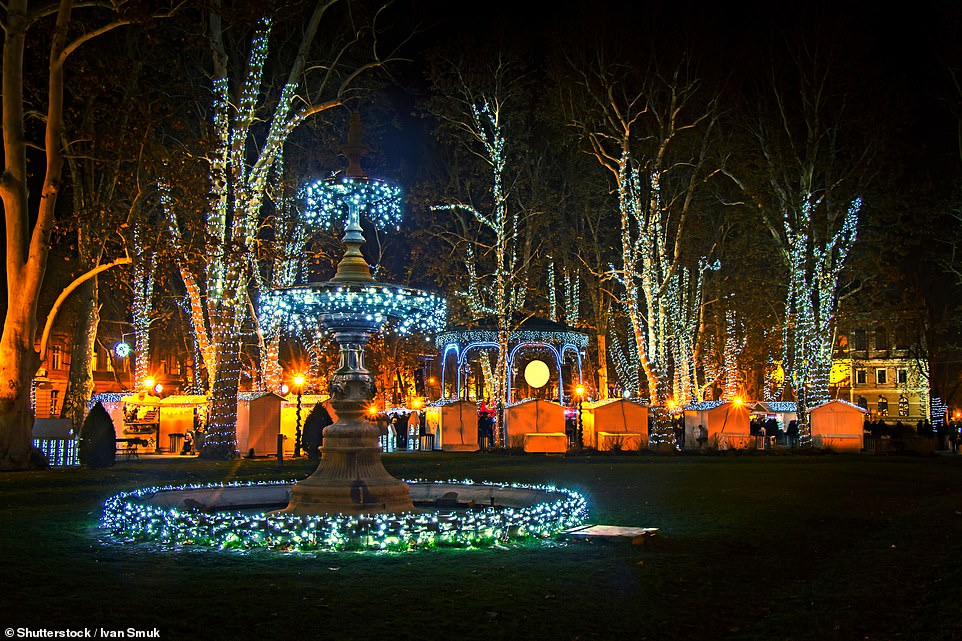 Zagreb: The cobbled streets of Croatia’s elegant capital are at their most atmospheric in winter, when the trees in Zrinjevac park are illuminated with more than two million lights and its Christmas market (repeatedly voted Europe’s best) takes over Ban Jelacic Square. The Upper Town is the city’s historic heart. Take a stroll along Stross Promenade to Caffe de Matos, a collection of bars and shops that create the feel of a winter festival.

Split: Surrounded by the snow-capped Dinaric Alps, Split has a very different feel in winter to the hectic summer months.

The streets of the Old Town were built in 305 AD for Emperor Diocletian as his retirement complex, and seeing them in a crisp winter light, free of crowds, is a joy. In the evening, discover hearty local cuisine – the fish stew at family-owned Konoba Hvaranin is reckoned to be the best in the city.

Before the summer crowds arrive, this is a dreamy time to follow the gleaming yachts to Hvar, take the ferry to mountainous Korcula or explore Dubrovnik. 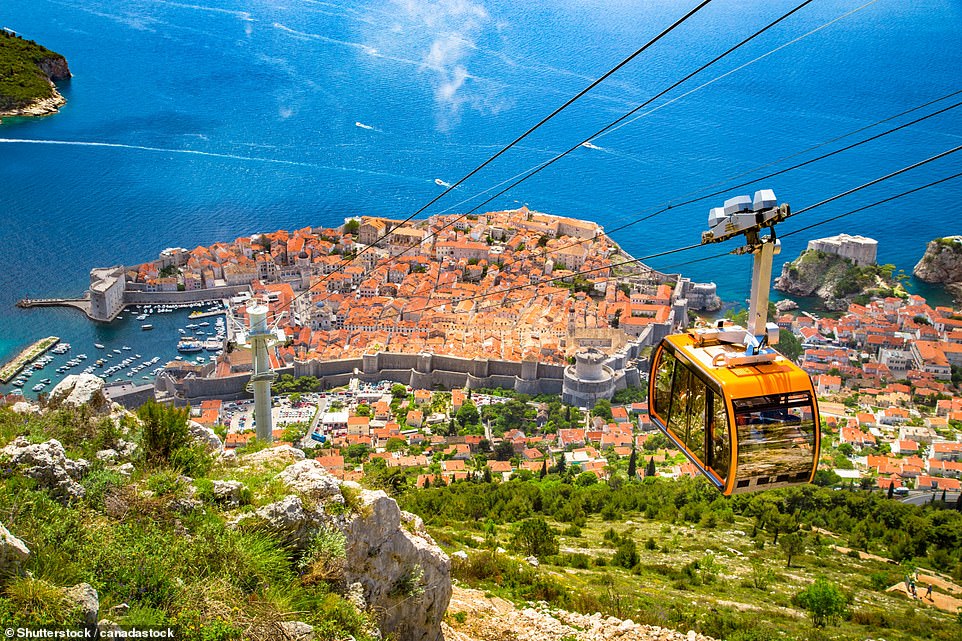 Dubrovnik: In spring the weather is still cool enough to walk the city’s ancient walls at any time of day. Take the queue-free cable car up Mount Srd (dubrovnikcablecar.com), which offers spectacular views. Avoid the over-priced restaurant at the top and instead, when you return to the lowest cable-car station, tuck into the city’s best pizza at Tabasco right next door.

Visit the Homeland War Museum (mdrd.hr) for a glimpse of what the city went through during the country’s civil war in the early 1990s, or swap the busy streets for a chilled, island vibe – the car-free Elafiti Islands of Kolocep or Lopud are ideal for a day trip.

A week’s B&B at Dubrovnik Palace costs from £946pp, including flights and transfers (tui.co.uk).

Hvar: Everyone from backpacking students to Euro royalty descends on Hvar in summer to enjoy its Ibiza-esque vibe. But in spring, things are calmer – it’s possible to get a table for cocktails on Riva’s elegant terrace, for example, and the winding roads that lead to the island’s hidden beaches are less jammed.

Hop on a boat taxi to the nearby island of Sveti Klement, where the Meneghello restaurant at the cute Palmizana hotel (palmizana.com) is an idyllic spot for lunch.

A week at the Amfora Hvar Resort costs from £799pp B&B, including flights (onthebeach.co.uk).

A thing of beauty: Korcula, above, the reputed birthplace of explorer Marco Polo

Korcula: Most famous as the reputed birthplace of explorer Marco Polo, Korcula is dramatic – swathed in forests and vineyards with a windy coastline that’s ideal for sailors and windsurfers.

The elegant, streets of Korcula Town are dotted with art galleries and boutiques that are perfect for a morning’s browse before lunch at Adio Mare (konobaadiomare.hr), one of the island’s best-loved konobas – little Croatian restaurants with simple menus that are often family owned.

A week at Hotel Marko Polo costs from £549pp half-board, including flights and transfers (prestigeholidays.co.uk).