A desperate Vladimir Putin is trying to ‘conceal fuel trucks as regular support vehicles’ as Ukrainian forces continue to hammer his beleaguered support lines – while the Russian President has also stepped up attacks on civilians in a ‘bid to break morale’.

Supply issues and logistical problems have been plaguing Russian advances for a number of days as Ukrainian forces continue to put up stiff resistance and hold key cities.

It has defied Putin’s plans for a swift and crushing victory that would not require significant supply lines or reinforcements.

A huge Russian military convoy was pictured traveling towards the Ukrainian capital of Kyiv earlier this week, understood to extend for 40 miles, but has made no progress of note for at least two days due to fuel and food shortages.

And aerial footage has now emerged of burning Russian vehicles and armoured cars sat burning having being left abandoned after running out of fuel.

Now Russia is trying to disguise its fuel trucks in order to minimise losses.

It comes as dramatic footage emerged yesterday of the final moments of Russian attack helicopter shot down by Ukrainian soldiers over a rural village around 25 miles outside Kyiv, while evidence has also emerged to suggest that Russian jets have been downed near Chernihiv in northern Ukraine.

However, there have also been warnings that the vulnerability of Russian jets and helicopters may lead Putin’s commanders to further rely on artillery to bombard civilian infrastructure. This is likely to lead to further innocent lives being lost because artillery is less accurate than air strikes.

As the slow progress infuriates Putin, Moscow has been forced to deny it is targeting civilian areas.

The city council of Ukraine’s Mariupol has said an evacuation of some of 400,000 residents trapped by encircling Russian forces would start at 12pm today until 9pm under a temporary ceasefire.

It comes as residents are being forced to flee the nearby towns of Bucha and Irpin as they are pounded by air strikes.

But the latest agreement comes just a day after Russia’s abandonment of a ceasefire as fleeing refugees were shelled as they tried to escape on Saturday.

Some 200,000 civilians were set to leave the port city of Mariupol and 15,000 from Volnovakha in eastern Ukraine at 7am yesterday (UK time) as part of a temporary ceasefire deal overseen by the Red Cross.

But just 400 refugees managed to flee Volnovakha before the ceasefire was shattered. It is unclear how many – if any – families escaped Mariupol. 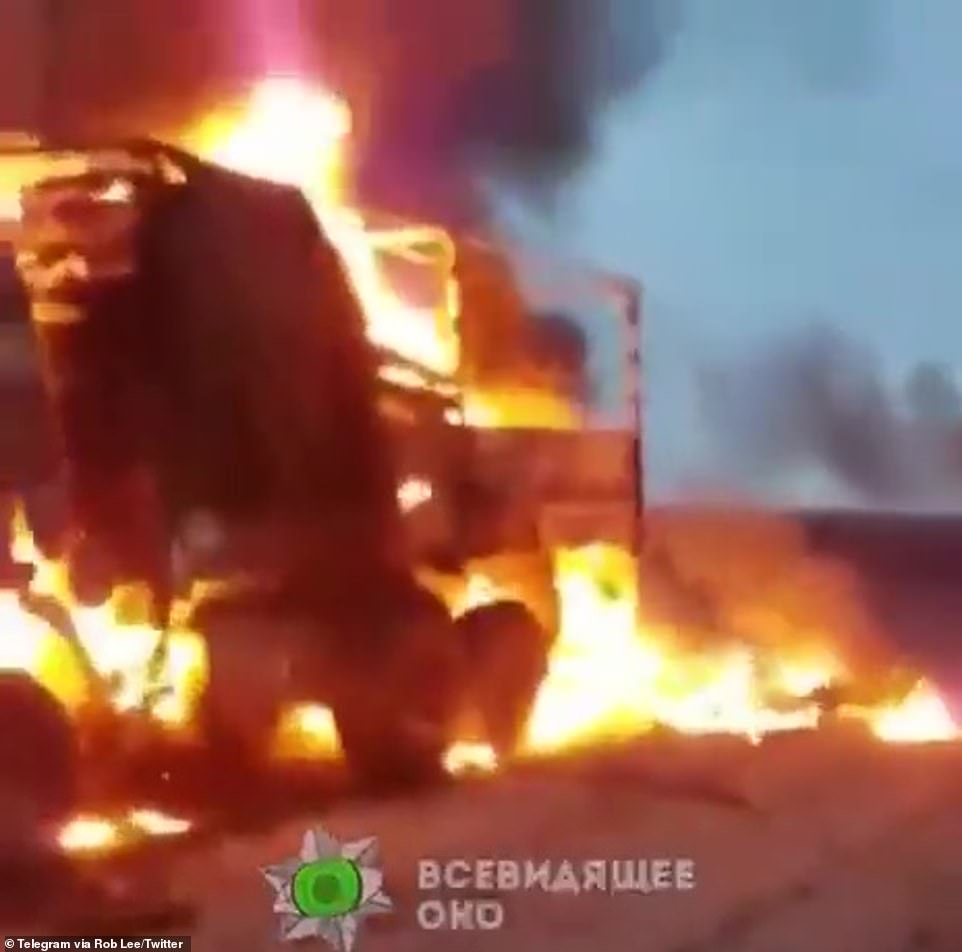 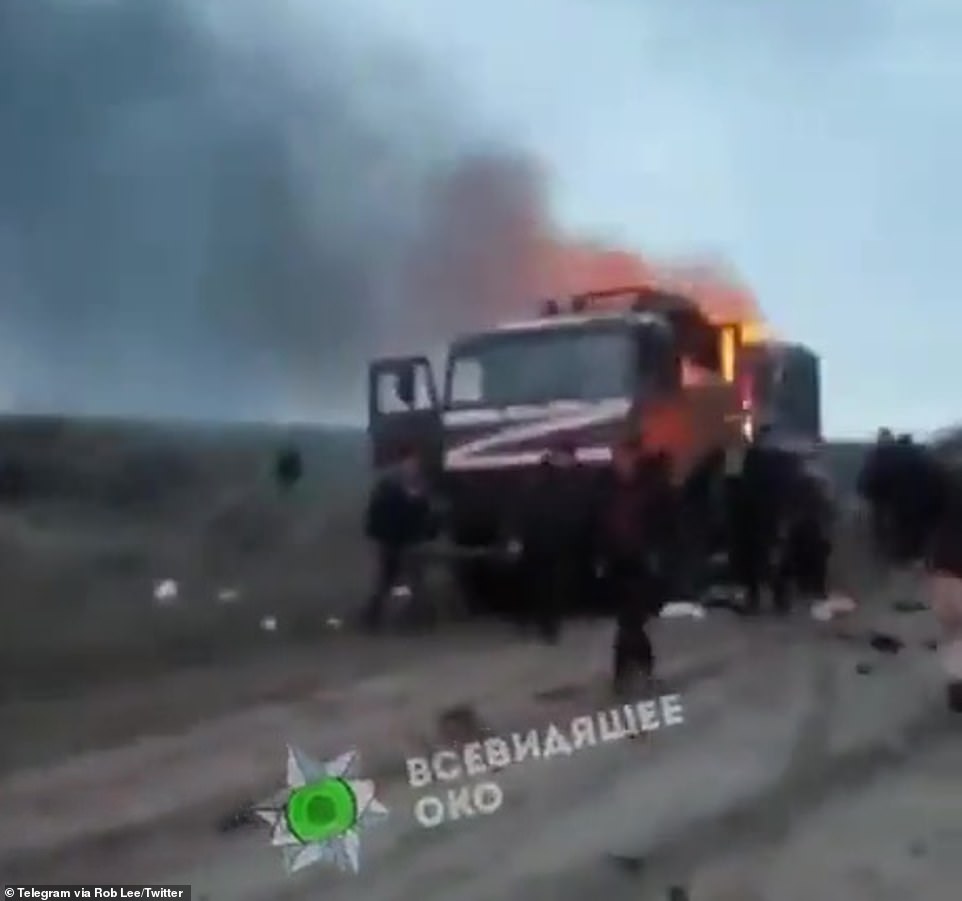 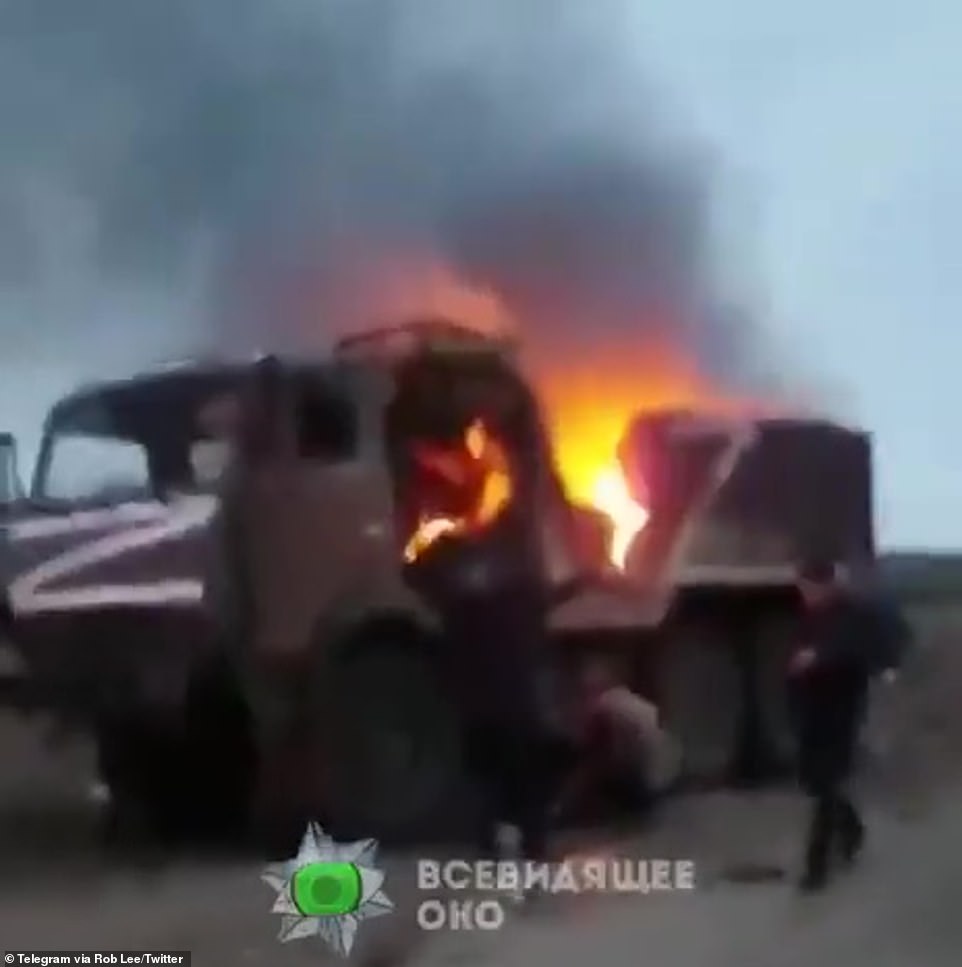 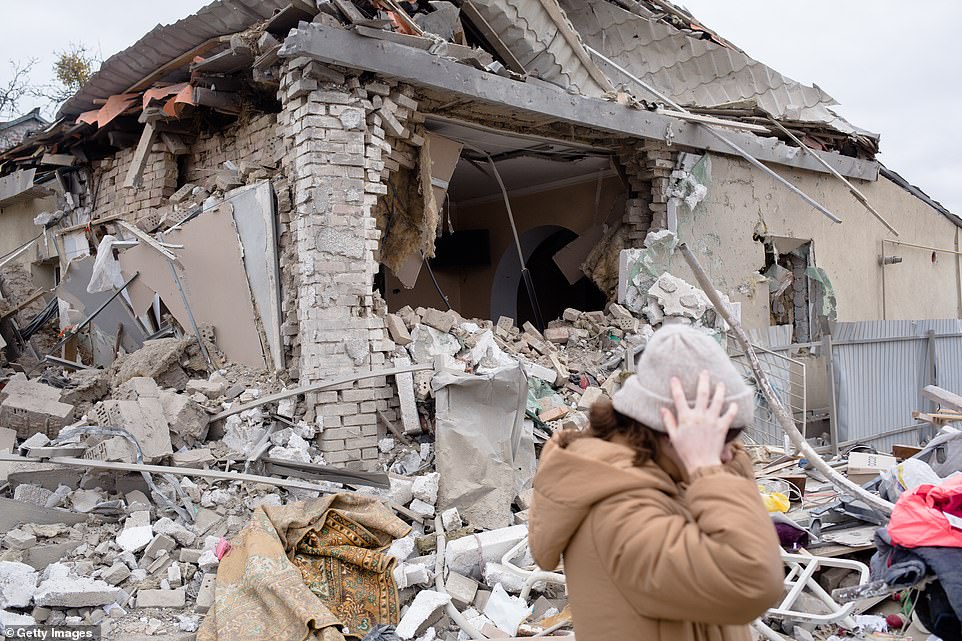 Residential houses were destroyed by shelling in the Markhalivka area of Ukraine on Saturday. Regional police said six people died, including a child, and four were wounded in a Russian air strike on this village southwest of Kyiv 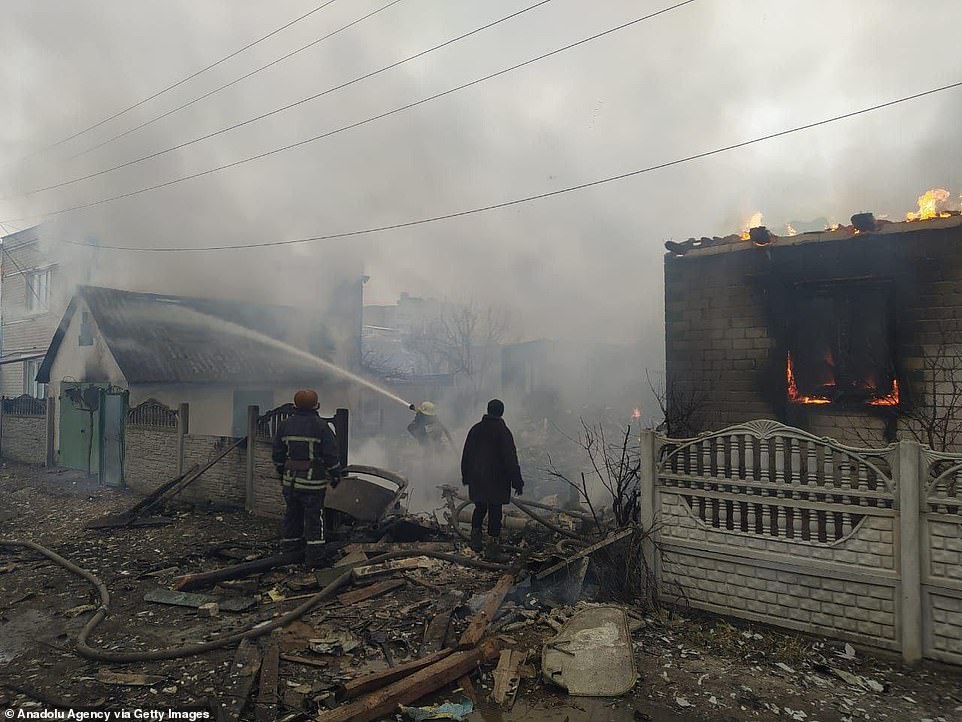 Firefighters try to extinguish a fire broke out at a house following Russian shelling in Chernihiv, Ukraine, on Saturday

‘Attacks on healthcare facilities or workers breach medical neutrality and are violations of international humanitarian law.’

Yesterday heartbreaking pictures emerged of men, women and children hiding under a destroyed bridge to escape Russian air strikes on Irpin, on the outskirts of Kyiv.

Hundreds of residents sheltered in the darkness beneath the bridge which had been blown up by the Russians. They were forced to seek refuge there – even though the bridge could collapse – because Russian warplanes were circling overhead.

The number of fleeing refugees is expected to reach 1.5 million on Sunday as the war reaches its 11th day.

Meanwhile, Putin yesterday warned the ongoing resistance is putting Ukrainian statehood in jeopardy and said sanctions imposed by the West sanctions are akin to ‘declaring war’.

He continued to pin the blame for the war squarely on the Ukrainian leadership and slammed their resistance to the invasion.

The Russian leader said: ‘If they continue to do what they are doing, they are calling into question the future of Ukrainian statehood. And if this happens, it will be entirely on their conscience.’

Putin added: ‘These sanctions that are being imposed, they are akin to declaring war. But thank God, we haven’t got there yet.’

Russia’s financial system suffered yet another blow late on Saturday as Mastercard and Visa announced they were suspending operations in the country.

It comes as some of Putin’s own soldiers remarkable called on Russia to stop the war yesterday. 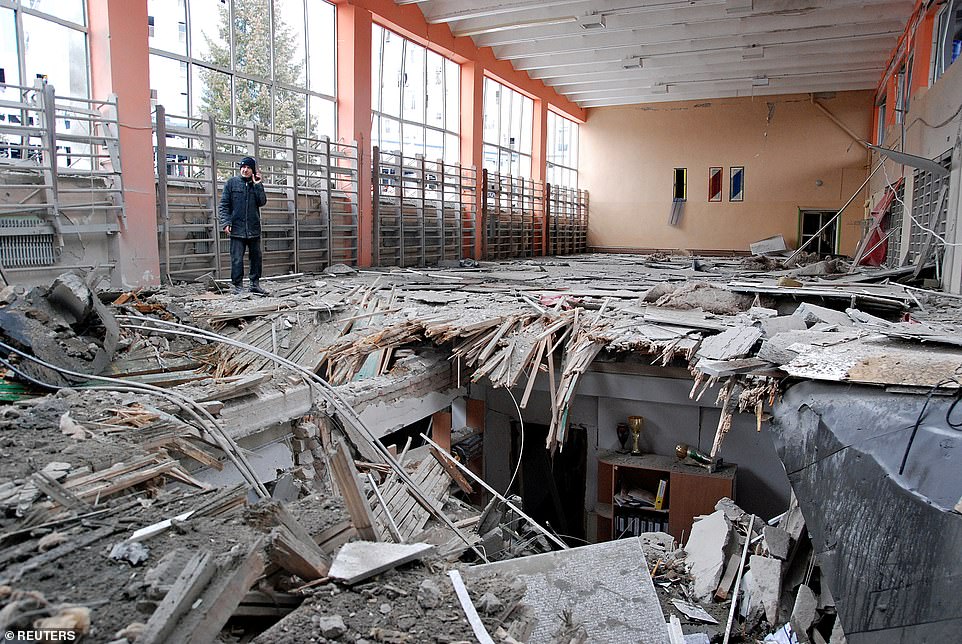 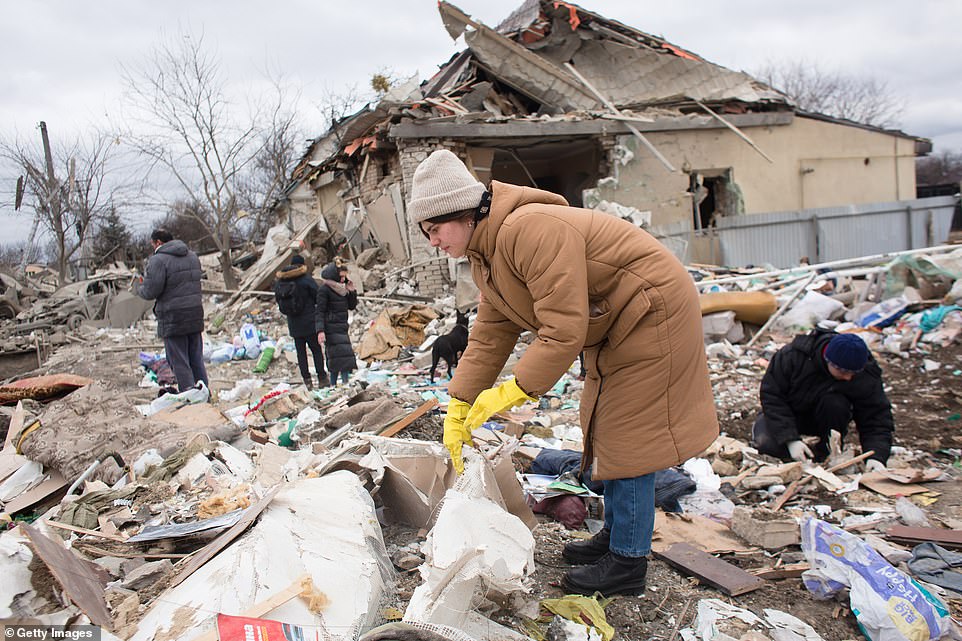 Neighbours and relatives help remove the rubble of a house destroyed with shelling in Markhalivka, Ukraine, on Saturday 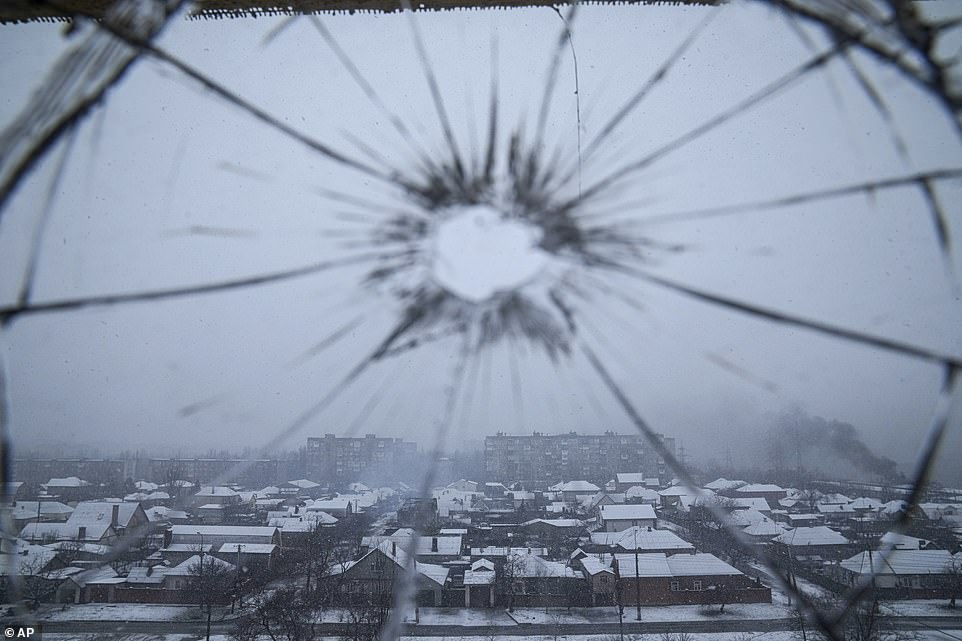 Glass on a hospital window is shattered by shelling in Mariupol, Ukraine on Thursday. It comes as the World Health Organisation said Russia has carried out several attacks on Ukrainian ‘health care’

President Zelensky claimed yesterday that 10,000 Russian troops had died in the war, a claim that could not be independently verified. ‘We’re inflicting losses on the occupants they could not see in their worst nightmare,’ he added.

The Russian military, which does not offer regular updates on casualties, said on Wednesday that 498 of its troops had died in the conflict. Ukraine’s military might is vastly outmatched by Russia’s, but its military and volunteer forces have fought back with fierce tenacity since the invasion.

A third round of talks between Russia and Ukraine will take place Monday, according to Davyd Arakhamia, a member of the Ukrainian delegation. He gave no additional details, including where they would take place.   .