Danone sacked its boss yesterday after a power struggle with activist investors.

The corporate giant behind Activia yoghurt said its board had ousted Emmanuel Faber.

The 57-year-old was stepping down immediately as chairman and chief executive, the company said. 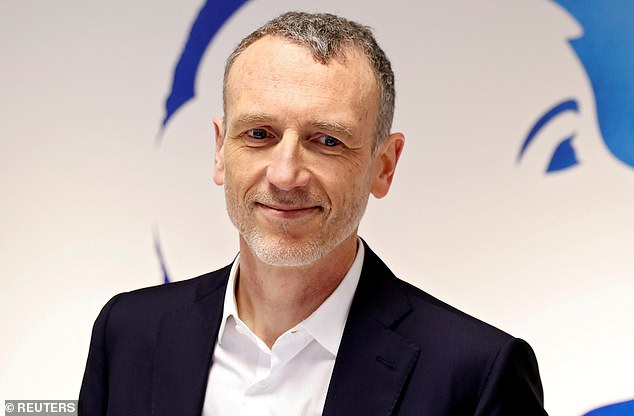 Out: Danone said its board had ousted Emmanuel Faber (pictured) and that the 57-year-old was stepping down immediately as chairman and chief executive

Faber’s departure comes after calls for his removal and a major governance shake-up by leading shareholders, who argue Danone has under-performed in recent years.

The row has rocked corporate France where big firms rarely come under attack from investors.

Faber, a strong advocate for environmental issues, had originally proposed changes that would have seen him stay on as chairman with a chief executive underneath him.

But in a statement, Danone said: ‘The board has decided that Emmanuel Faber will step down as chairman and chief executive.’

The company said Gilles Schnepp had been appointed as chairman in his place, while Véronique Penchienati-Bosetta, the international chief executive, and North America boss Shane Grant will jointly lead the business until a new chief executive is recruited.

Danone gave no reason for Faber’s departure and no statement from him was included.

But a statement from Schnepp praised the former boss for his ‘leadership and significant contributions to Danone since 1997’.

Schnepp added: ‘He leaves Danone with a strong platform from which to accelerate and grow.’

Shares in the French food group jumped in early trading following the news of Faber’s departure.

Faber, who became chief executive in 2014 and later took on the chairmanship, had led a push into healthy foods, including through the 2016 acquisition of Colorado-based food company, WhiteWave.

But problems at the world’s largest yoghurt-maker, which also makes Evian bottled water, were exacerbated by the Covid-19 pandemic, which hit sales to the restaurant sector for example.

That prompted Artisan Partners and Bluebell Capital to call for Faber to leave and to publicly champion Schnepp – the former chief of electrical firm Legrand named to Danone’s board in December – who they said would be a truly independent chairman.

The row has shaken corporate France where it is rare for top institutional shareholders like Artisan to argue with companies so publicly.

Francesco Trapani, chairman of Bluebell, said: ‘Gilles Schnepp has shown great leadership in getting the board to take the right decisions.

‘We are fully supportive of him in his next key task to recruit a high-calibre chief executive able to combine shareholder value creation and Danone’s commitments to environmental, social and governance.’