In Orwell’s dystopian novel 1984, the purpose of the Ministry of Truth was to rewrite history, by falsifying any facts which did not fit in with party doctrine.

In a chilling case of life imitating art, Vladimir Putin is doing precisely that in Russia today.

There is no war in Ukraine, he says, and anyone who says there is will go to prison for up to 15 years.

The Kremlin is trying furiously to shut down independent sources of news that show their leader to be a bare-faced liar.

But this is the age of the internet. The truth will out. The actual truth.

Truth is treason in Putin’s dystopian state. There is no war in Ukraine, he says, and anyone who says there is will go to prison for up to 15 years

There were anti-war demonstrations in 44 Russian cities yesterday, with more than 4,000 protesters herded into police vans.

They know what’s happening and so does everyone else.

The idea that the population can be kept in the dark is simply risible.

It’s easy to see Putin’s twisted logic. If there is no war, then it can’t be going badly.

But it is. Very badly. What was meant to be a stroll into Kyiv has become a deadly war of attrition.

The heroic resistance of Ukrainian forces has caused such disarray among the invaders that Britain’s chief of the defence staff, Admiral Sir Tony Radakin, believes Russia could even lose this campaign.

Meanwhile, there is also dissent in Belarus – Russia’s staunchest ally.

There are claims deputy defence minister Major General Viktor Gulevich has resigned, saying he couldn’t support the invasion and some Belarusian military personnel were refusing to engage in hostilities.

General Gulevich is among those facing UK Government sanctions, suggesting that asset freezing and travel bans are already concentrating minds.

Putin himself has described the sanctions regime as ‘an act of war’ and threatens reprisals – a sure sign that they are hurting him and his cronies.

In a six-point plan to overcome Putin’s aggression and end the horror of war in Ukraine, Boris Johnson pledged to ratchet up sanctions further still.

As we reveal today, more than 100 oligarchs, politicians and companies have been sanctioned by the US or EU but not yet by the UK.

Legal and bureaucratic hurdles are being cited as the reason. They must be cleared without further delay.

Short of military action, sanctions are the West’s most potent weapon.

For Ukraine to have any chance of being saved from tyranny, they must be deployed at full speed – and with utter ruthlessness.

It’s typical of Britain’s shambolic energy policy that in the midst of a global crisis we are about to block off the only avenue that could make us self-sufficient in gas.

Next week the country’s only two experimental shale gas wells – in Lancashire – are to be sealed with concrete, effectively abandoning this potentially vast domestic energy source.

As well as supplying cheap gas, fracking could provide many thousands of jobs in the North of England, playing directly into the levelling-up agenda. 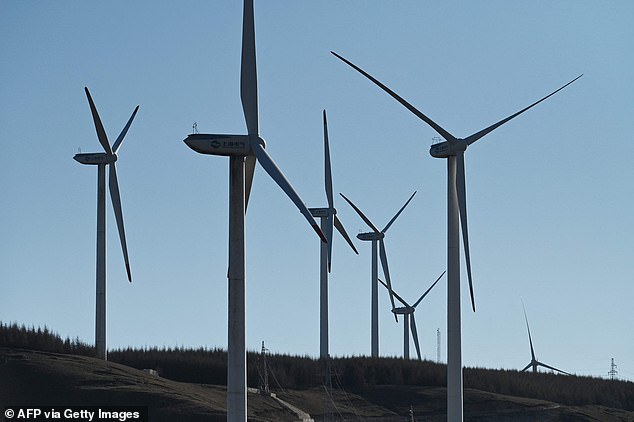 Renewables alone will not keep the lights and radiators on over the next 28 years. Isn’t it time we mobilised a taskforce – like we did during the vaccine rollout – to secure our energy needs for the next generation?

To dismiss it out of hand is simply crazy.

For all the wishing and hoping, renewables alone will not keep the lights and radiators on over the next 28 years.

So in the Gadarene rush to net-zero, we will either have to buy in increasing supplies from despots such as Putin or turbocharge our own nuclear and North Sea production.

The vaccine miracle showed what can be done by a public/private task force under dynamic leadership and liberated from the crushing red tape of Whitehall.

Isn’t it time to mobilise a similar force to secure our energy needs for the next generation?

We must get our heads out of the sand.