This newspaper is proud and grateful that our Ukraine refugee appeal today receives a Royal seal of approval.

In a marvellous gesture, the Duchess of Cornwall has made a substantial donation to help the victims of Russia’s barbarism.

Her generous gift takes the total raised to a staggering £2.55million.

Through decades of campaigning, we have always been awestruck by Mail readers’ benevolence. But you have surpassed yourselves again, helping make this the fastest newspaper appeal in history.

It’s hardly surprising. As a tearful Camilla told friends: ‘No one could fail to be moved by the appalling scenes of war.’ 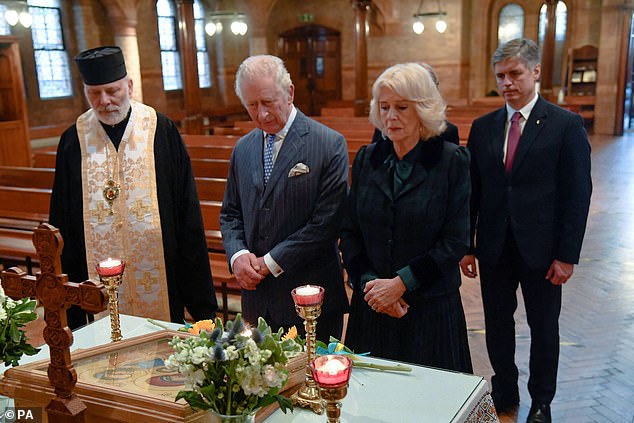 In a marvellous gesture, the Duchess of Cornwall has made a substantial donation to help the victims of Russia’s barbarism. Her generous gift takes the total raised to a staggering £2.55million. Pictured: Duchess of Cornwall and Prince Charles during a visit to the Ukrainian Catholic Cathedral in London

Prince Charles, meanwhile, spoke for the entire nation when paying tribute to the Ukrainian people’s ‘bravery and fortitude’ in the face of ‘truly terrible aggression’.

Every penny raised will go towards food, water, shelter and medical treatment for almost one million fleeing the warzone.

And every penny will be needed. With evil Putin’s forces indiscriminately bombing whole neighbourhoods, slaughtering civilians including children, countless others will be forced from their homes.

Furious his invasion is being resisted, the tyrant has resorted to war crimes.

But Boris Johnson rightly resists brainless calls to impose a no-fly zone to stop the carnage. However well intentioned, such a move would inevitably inflame a volatile conflict with a nuclear power.

For now, the West should continue arming Ukraine and tightening the sanctions noose strangling Russia’s economy.

Yes, these measures will cost British families in higher fuel and food bills. But this is a price worth paying to defend democracy from Putin’s pariah state.

It’s shameful that it has taken a brutal war for the Government to crack down on Putin’s pet oligarchs using Britain as a safe haven for stolen money.

Having got round to it, Mr Johnson is right to also take aim at the venal London legal firms, accountants and estate agents who get rich abetting billionaire gangsters.

Anger is mounting at amoral City lawyers, who think they’re untouchable, frustrating No 10’s bid to impose sanctions on kleptocrats, while intimidating journalists who investigate their clients.

These white-collar collaborators deserve to be named and shamed at the very least.

The reputational costs of working for the Kremlin and its stooges must become so high that no hourly rate can compensate for them.

In the face of ill-informed, hysterical and sinister anti-vaxxer scaremongering, more spectacular news that jabs work.

So successfully has the HPV inoculation cut the risk of cervical cancer – by nearly 90 per cent – that experts believe women will soon need only one smear test in their life.

That would mean fewer risking their health by shunning check-ups, which many find uncomfortable and embarrassing.

This seismic shift, within a generation, is a triumph for science – and the grateful women whose lives have been saved.

With its Online Safety Bill, the Government seeks to halt the tsunami of extremist material, pornography and criminality that swills across the internet.

But the unintended consequence of making social media firms responsible for policing ‘legal but harmful’ content is disastrous for freedom of speech.

Lord Frost hits the nail on the head.

Granting ‘woke’ Silicon Valley executives a censor’s charter makes them the arbiter of what views are considered acceptable – and which ones should be silenced.