That’s the message from the Cyprus minister of tourism, Savvas Perdios, who can’t wait to welcome Britons back to his island’s gorgeous beaches and azure waters when travel returns. Here we offer up a tantalising guide to the best of Cyprus.

Out of this world: A view of the Love Bridge from Protaras in Cyprus. In Protaras, you can try scuba diving, windsurfing and jet-skiing

A WELCOME MESSAGE FROM THE CYPRUS MINISTER OF TOURISM 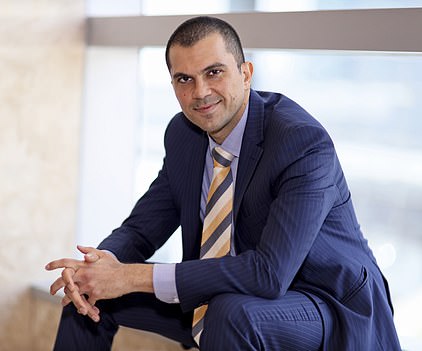 Savvas Perdios, the minister of tourism in Cyprus

Cyprus is a joy at the moment. There’s so much colour. It was 25c (77f) here yesterday; the sun was shining; people were swimming in the sea and walking on the beaches.

We know how much they enjoy Cyprus and we enjoy hosting them. They come here for the weather, beaches, hospitality and the quality of food.

It’s an island that feels like a second home to them. History has shown us that when a traveller from the UK comes to our country they tend to return — so we are trying to facilitate that in any way we can.

We learnt a lot from last year. We got a taste of what it’s like to run a destination with protocols in place. It went well and everyone was kept safe. No tourist left Cyprus with Covid-19.

It’s up to the UK Government to decide when people are allowed to fly, but we will be opening up to British tourists on April 1 with a new system of restrictions and, from May 1, British tourists who have been vaccinated can travel here without any testing or quarantine restrictions.

We are a small island, which means you can get anywhere in an hour and a half. You can be holidaying by the beach, then take a trip to the highest mountain and return to have dinner by the beach. Not many destinations can emulate that. Despite it being winter and lockdown, the weather over the past couple of months has been gorgeous. It’s a huge selling point for Cyprus.

We are determined to operate as usual this summer.

No masks will be compulsory on the beach, by the pool or while exercising and enjoying food and drink. It’s going to be a very relaxed atmosphere.

No other destination has come out to say how ready they are and we have done it.

We’re on the road to recovery and we look forward to welcoming you back.

BY SAVVAS PERDIOS, MINISTER OF TOURISM

Try scuba diving, windsurfing and jet-skiing while staying at the beach resort of Protaras in the south-east of the island.

There are no fewer than five beaches nearby with Mouzoura Beach one of the best, with a good restaurant for lunch.

Base yourself at the minimalist-chic Silver Sands Beach Hotel with its little curve of sand and jetty for boat excursions. The stylish cocktail bar has a lovely terrace facing the sea.

Don’t miss: Take an evening out to sample the lively bars and nightclubs of nearby Ayia Napa — at least we hope they will be up and running.

Details: A week half-board from £410pp departing from Gatwick (easyjet.com).

Take to winding roads and trails between remote villages in the south of the country on regular bicycles or e-bikes (electric bikes that help with pedalling) on a countryside tour.

Stop by at olive farms, wineries and honey-making centres — as well as tavernas and restaurants for lunch — while staying overnight at a series of hotels, apartments and guest houses.

Your luggage is transported. The route takes you through rolling hills and finishes by the sea. You can walk if you prefer.

Don’t miss: A visit to the tranquil 15th-century Convent of Aghios Minas in the village of Valva, with its elegant mixture of Byzantine and Gothic styles.

Between Paphos and Limassol on the south coast, Pissouri is a village of low-level whitewashed buildings on a peaceful bay.

The Kotzias Beach Apartments are 100 metres up a hillside from the seaside, making a lovely retreat after a beach day, with great views across the water.

There is a little pool surrounded by palm trees and lawns, with a rocky mountain slope on one side.

Each room has its own private terrace or balcony; perfect for putting your feet up with a novel or perhaps Colin Thubron’s entertaining 1975 travel book Journey Into Cyprus.

Don’t miss: Taking a walk in the hills behind Pissouri.

Details: A fortnight self-catering from £812pp departing from Manchester on May 20 (olympicholidays.com).

Explore the rugged coastline of the Akamas National Park, which covers 144 square miles in the north-west of the island, on a walking holiday.

Base yourself at the Tavros Hotel Apartments (days one to four), close to the picturesque village of Latchi with its three little tavernas, and the Souli Hotel (days five to eight), close to a small beach, while enjoying hikes of whatever length you choose each day in the conservation area.

Loggerhead turtles nest on the coastline and foxes, snakes, owls, griffon vultures, fruit bats and seals can also be spotted.

Don’t miss: The Fontana Amorosa is a freshwater pool where Aphrodite is said to have bathed with her lover Adonis.

Details: A week-long trip from £667pp with transfers between accommodation, breakfasts at the Souli Hotel and Gatwick flights (sunvil.co.uk). 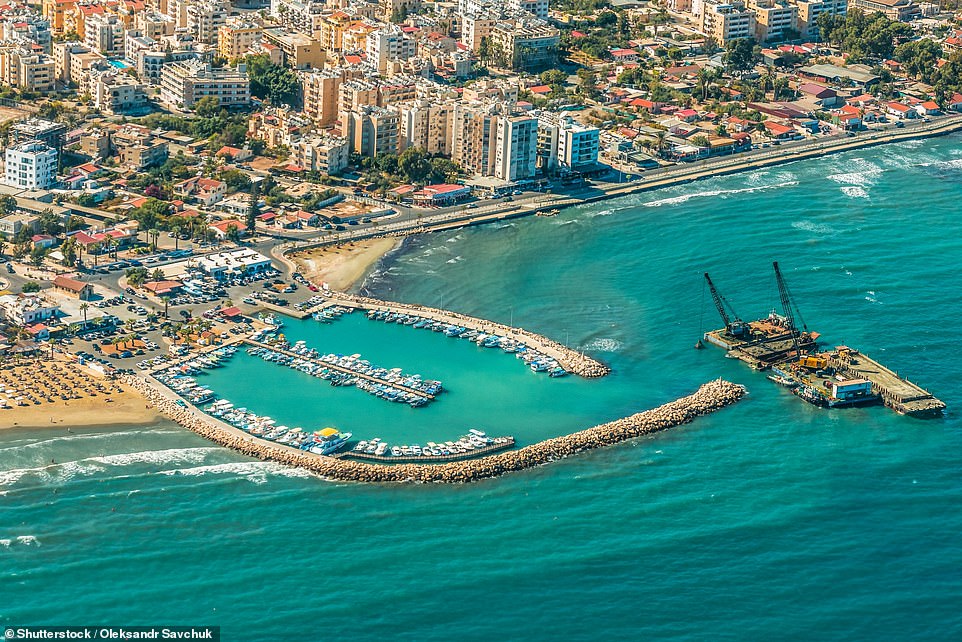 Larnaca, pictured, is the third biggest city in Cyprus. There are buzzy cafes and bars by its marina and it also has museums, forts and archaeological sites

Escape the first possible day you can to enjoy the usually buzzy cafes and bars by the marina in Larnaca, the third biggest city in Cyprus, located in the south-east.

Stay at the Palm Beach Hotel and Bungalows on the edge of town, which comes with a pool, tennis courts, gym, poolside bar and its own orthodox chapel.

The joy of the hotel is that you have Larnaca to explore with its museums, forts and archaeological sites, yet you can retreat to the splendour of the pool facing the sea.

Details: A week B&B from £504pp departing from Gatwick (easyjet.com). 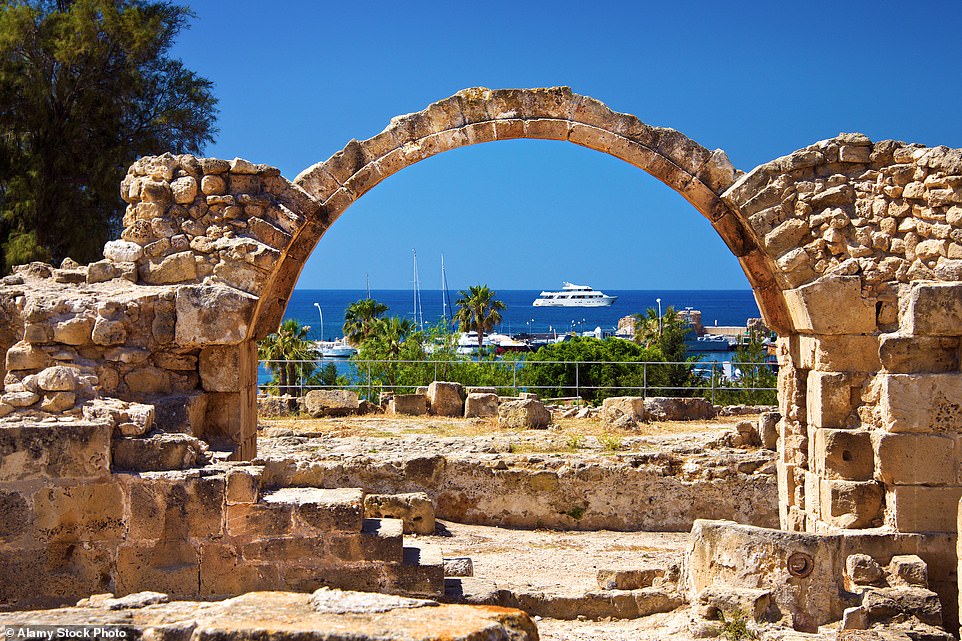 Hotel Louis Ledra Beach is close to the city-port of Paphos, pictured. It is where the mythical fertility goddess Aphrodite is believed to have risen from the sea 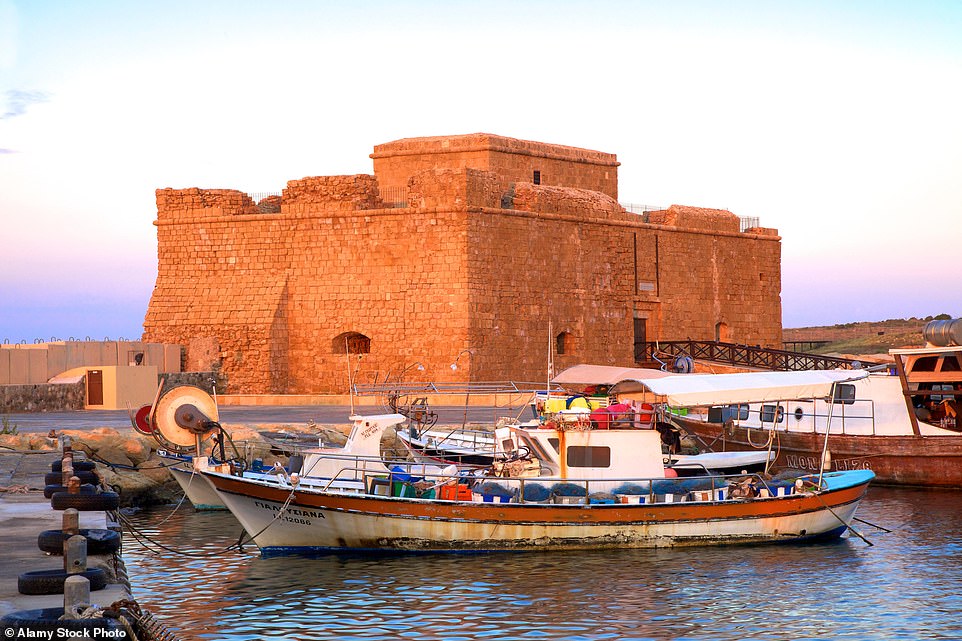 Visitors to Paphos should check out Paphos Castle, pictured, which was originally built as a Byzantine fort

Enjoy a sundowner at the beach bar facing the pleasant curve of sand and shingle at Hotel Louis Ledra Beach hotel.

This is a charming spot with a winding path along the coast leading to the city-port of Paphos, about 30 minutes away, where there are sights to explore connected to the mythical fertility goddess Aphrodite. Paphos, where she is believed to have risen from the sea, is in the south-west.

There is plenty to ponder while enjoying a glass of retsina (Greek white or rosé wine) or ouzo (the anise-flavoured aperitif) after taking a dip in the calm water.

Don’t miss: A trip to Paphos Castle, originally built as a Byzantine fort.

Details: A week all-inclusive from £688pp departing on May 19 from Gatwick (tui.co.uk). 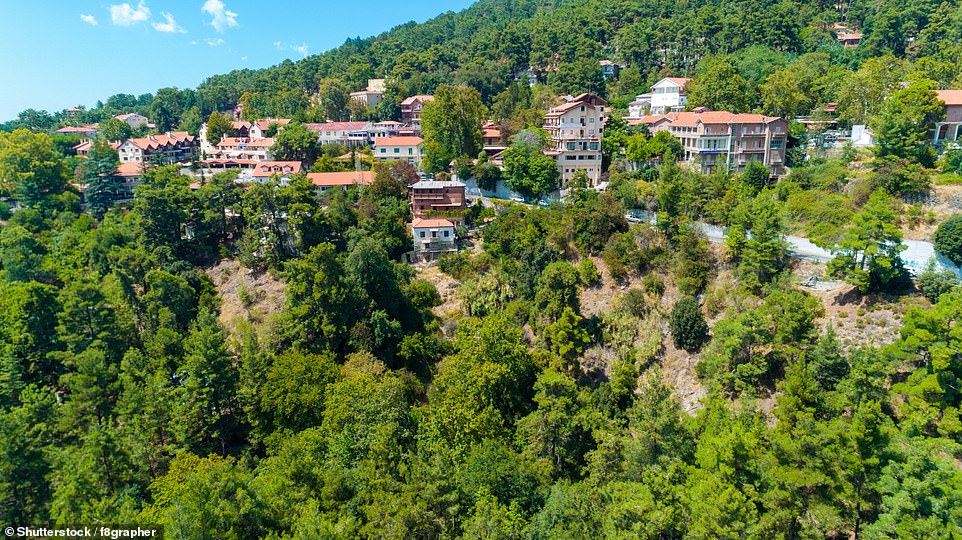 The stunning village of Platres up in the Troodos Mountains. It makes a fine base for a walking break or for visiting the nearby Trooditissa and Kykkos monasteries

WINE, ORCHIDS AND A ROYAL WEDDING

A mountain hideaway beckons at Forest Park Hotel, tucked away deep in pine forest on the edge of the village of Platres up in the Troodos Mountains.

This four-star hotel — where business conferences are sometimes held — has an indoor and outdoor pool, a spa and tennis courts. It makes a fine base for a walking break or for visiting the nearby Trooditissa and Kykkos monasteries; car hire can be arranged via the hotel reception. In bygone days, King Farouk of Egypt and the Greek Nobel Prize-winning poet Odysseas Elytis used to holiday in Platres — so you are in interesting historical company.

Don’t miss: One of the excellent walks, the Persephone Trail, is the least challenging, about two miles with a fine view at a lookout in the middle.

Details: A week B&B from £519pp with Manchester flights on May 22 (olympicholidays.com).

After so long stuck at home, perhaps it’s time to splash out —and getting away as soon as possible. If so, the Amavi Hotel on the coast near Paphos will fit the bill.

Its luxury suites have tinted windows facing the sea. Indulge in a treatment at the spa, in massage rooms with ceiling-to-floor windows overlooking the water, or play a game of tennis.Then enjoy a few leisurely laps in one of the infinity pools, or simply lie out on a sun lounger on the well-kept lawn surrounded by palm trees.

Don’t miss: A martini in the Selene Cocktail Bar at sunset or listening to the pianist in the Nocturne Restaurant.

Details: A week half-board from £1,501pp with Stansted flights (jet2holidays.com).

Seven miles outside Limassol on the south coast, the island’s second biggest city, the Amathus Beach Hotel has a first-rate spa and a series of pools. One is especially for those taking ‘laps’ for exercise. Another, with sea water, lays claim to being the largest indoor pool in Cyprus.

It is the kind of hotel that some people will not want to leave, set right by a beach and with a relaxed open-air restaurant on a deck facing the sea.

Don’t miss: A trip to the Byzantine Castle and excellent Archaeological Museum in Limassol.

Details: A week B&B from £757 departing from Heathrow on May 21 (britishairways.com). 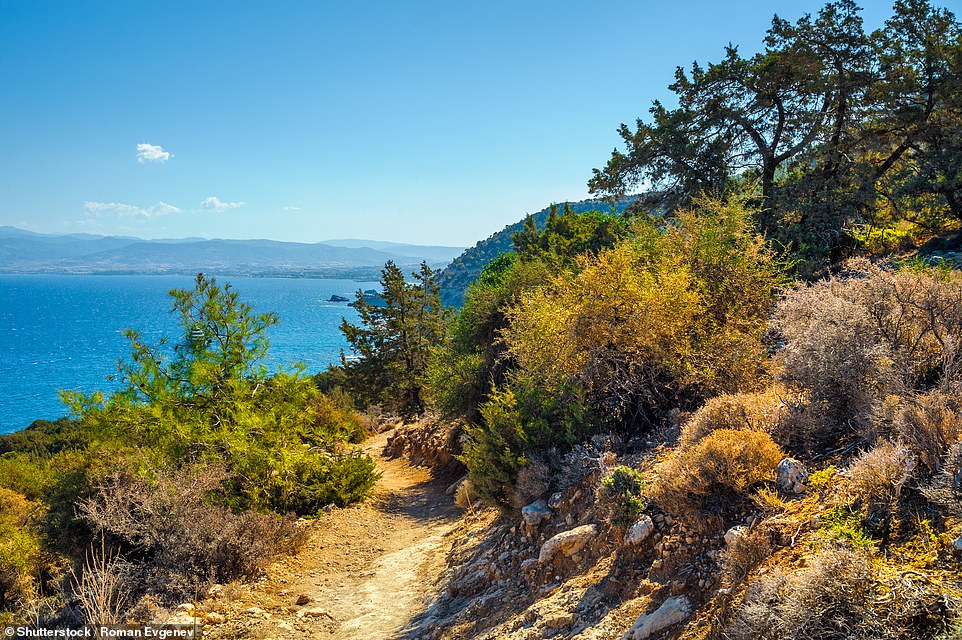 The beautiful Akamas National Park, where you can stay deep in the countryside in a self-catering villa

Stay deep in the countryside close to the beautiful Akamas National Park in one of the two Lenas self-catering villas.

Car hire is included in the price of a stay at these simple yet elegant properties hidden away on a hill clad with pine trees, olive trees and fruit orchards. Each comes with its own pool, kitchen and dining terrace. The villas are near the ancient town of Polis, which dates back to Neolithic times — so it is easy to stock up on groceries.

Don’t miss: A day trip to the peaceful fishing village of Latchi, near Polis, to pick up some fresh seafood.

Details: A fortnight self-catering from £967pp with Birmingham flights on May 23 (tui.co.uk).