‘Cross off that victory!’ Donald Trump falls victim to bad info by Fox News interviewer as he praises departure of Alejandro Mayorkas who is not actually resigning

President Donald Trump delighted in the seemingly big breaking news that Health and Human Services Secretary Alejandro Mayorkas was leaving his post – only to have to walk back his comment upon learning his interviewer gave him bad information.

The development had the potential to add more drama to the clash over the crush of child migrants at the border – until Harris acknowledged there was no resignation happening. 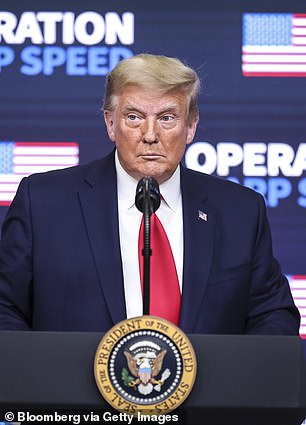 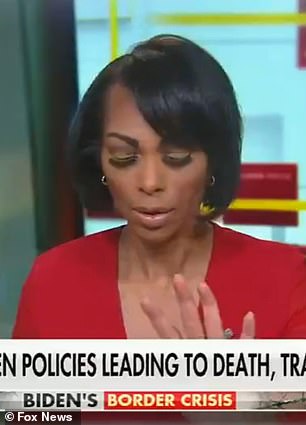 ‘Forgive me, that has not happened,’ Faulkner said, after taking a moment to listen to producers communicating with her through an ear piece.

‘I want to double-check this with our producers,’ Faulkner said with the former president on the line. ‘The DHS Secretary, Alejandro Mayorkas has resigned,’ she had told Trump.

‘Hold on, let me stop. Let me listen to my team one more time,’ she urged Trump. She then apologized for the error.

‘Okay. Cross off that victory,’ Trump told her,’ chuckling, as heard on a video clip of the interview. 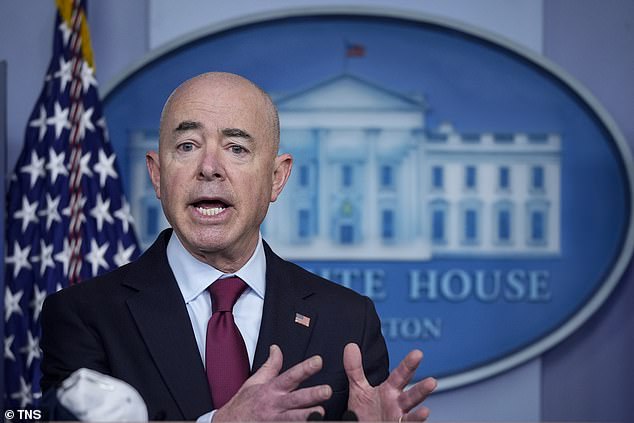 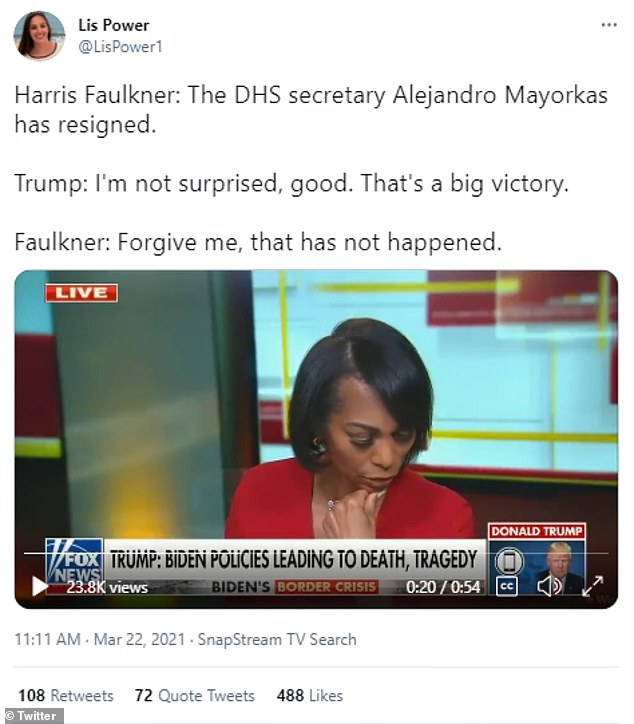 Trump responded when told that Alejandro Mayorkas was resigning, which he isn’t

Faulkner then brought up that Trump had issued a statement Sunday night calling for Mayorkas to go.

She then acknowledged her error again and joked about ‘clean-up on Aisle 7.’

Neither Trump nor Faulkner questioned the accuracy of the information when they initially came across it during the live call-in interview.

Mayorkas was only sworn in Feb. 2, and has not experienced any kind of personal scandal – although he has quickly become identified with the Biden Administration’s efforts to try to contain a growing crisis at the border of unaccompanied child migrants. The first Latino and first immigrant homeland chief was confirmed by the Senate 56 to 43, with six Republicans voting for him.

Mayorkas refused at a White House briefing days ago to call it a ‘crisis,’ and in Sunday talk show appearances urged potential immigrants not to come.

‘The pathetic, clueless performance of Secretary Mayorkas on the Sunday Shows today was a national disgrace. His self-satisfied presentation—in the middle of the massive crisis he helped engineer—is yet more proof he is incapable of leading DHS. Even someone of Mayorkas’ limited abilities should understand that if you provide Catch-and-Release to the world’s illegal aliens then the whole world will come,’ Trump said.

She accused the administration of being engaged in a ‘huge cover-up to hide just how bad things truly are’ and called for it to admit ‘their total failulre and adopt the profoundly effective, proven Trump policies.’

Trump’s own team also had to contend with a crush of arrivals, and faced criticism for it’s ‘zero toleration’ policy at the border and separation of immigrant families, many of whom the government is still seeking to reunite after admitting it cannot locate family members.

During his Fox appearance, Trump said the Biden administration was ‘destroying our country.’