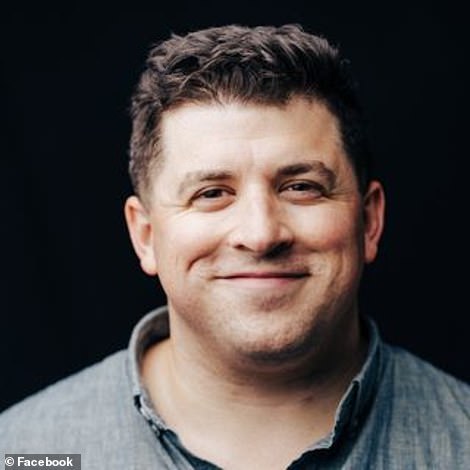 The creator of a wildly popular Instagram account that highlights the impressive wardrobes of America’s celebrity pastors has finally been identified two years after taking the internet by storm.

Ben Kirby, a self-described Evangelical from Dallas, revealed himself as the man behind the @PreachersNSneakers account on Monday.

Since opening his account in 2019, Kirby has amassed more than 210,000 followers by posting images of pastors next to exorbitant price tags for the items they’re wearing – most commonly, their sneakers.

Among his most liked posts were a photo of Hillsong pastor Carl Lentz – who baptized Justin Bieber – in a pair of $800 Fear of God kicks; Paula White – pastoral adviser to former President Donald Trump – in $785 Stella McCartney slip-ons; and Seattle megachurch pastor Judah Smith in a $3,600 Gucci jacket.

In his first interview ever using his real name, Kirby described to the Washington Post how he came up with the account after asking himself a simple question: How could a pastor afford shoes that cost more than my rent? 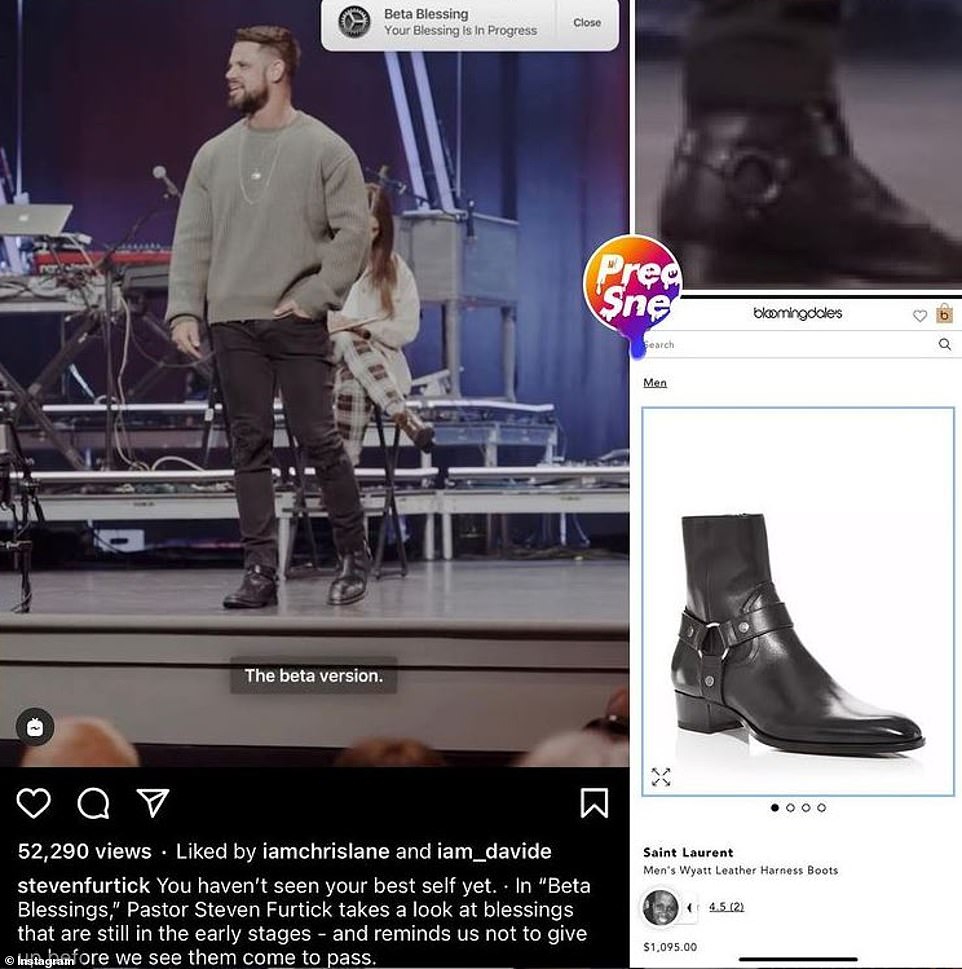 Since it began in 2019, the @PreachersNSneakers account has amassed more than 210,000 followers by posting images of pastors next to exorbitant price tags for the items they’re wearing – most commonly, their sneakers. Pictured: A January post identifies Pastor Steven Furtick’s $1,095 Saint Laurent boots 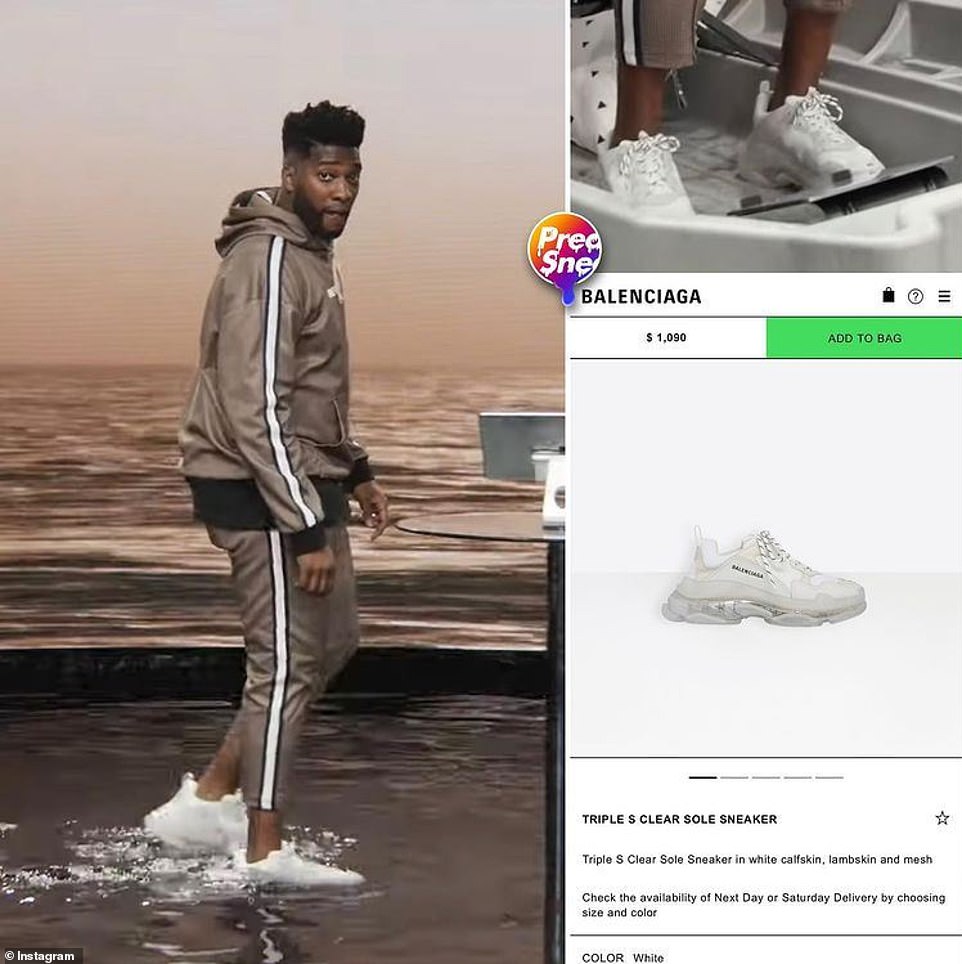 Pastor Mike Todd of the Oklahoma-based Transformation Church poses in a pair of $1,090 Balenciaga sneakers 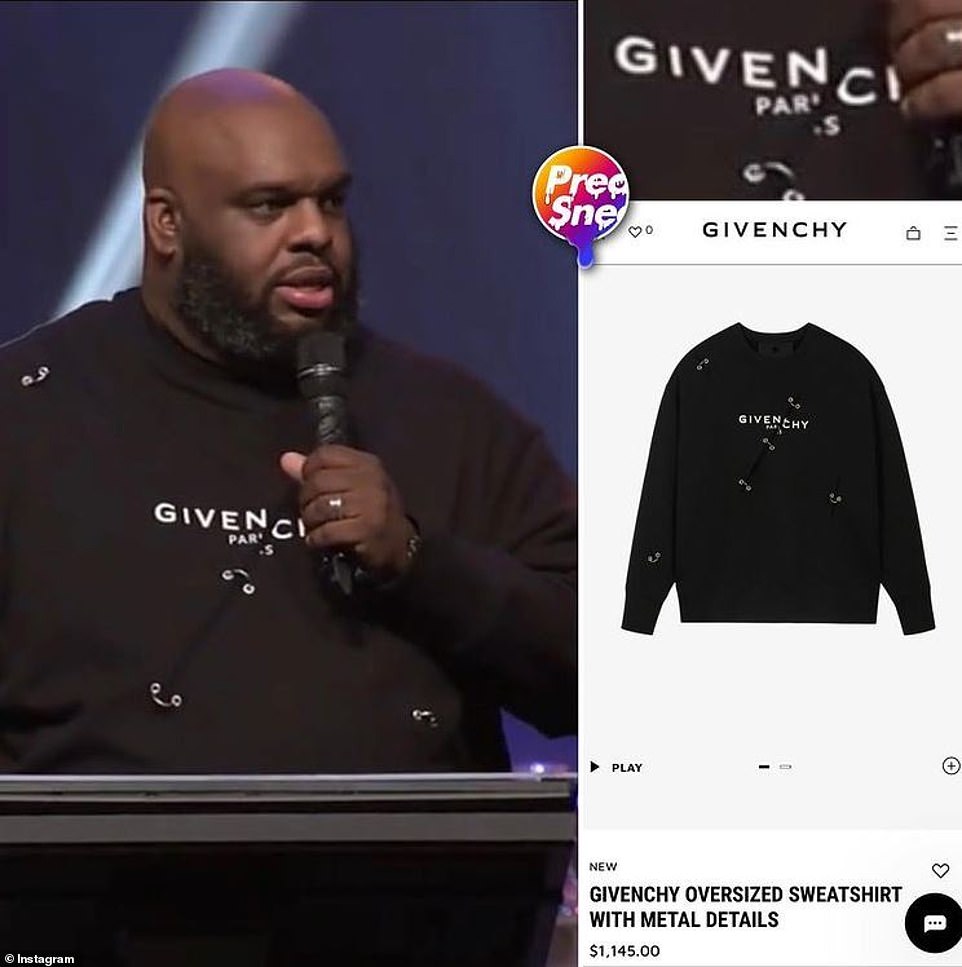 Pastor John Gray of the famed Lakewood Church in Texas preaches while wearing a $1,145 sweatshirt from Givenchy 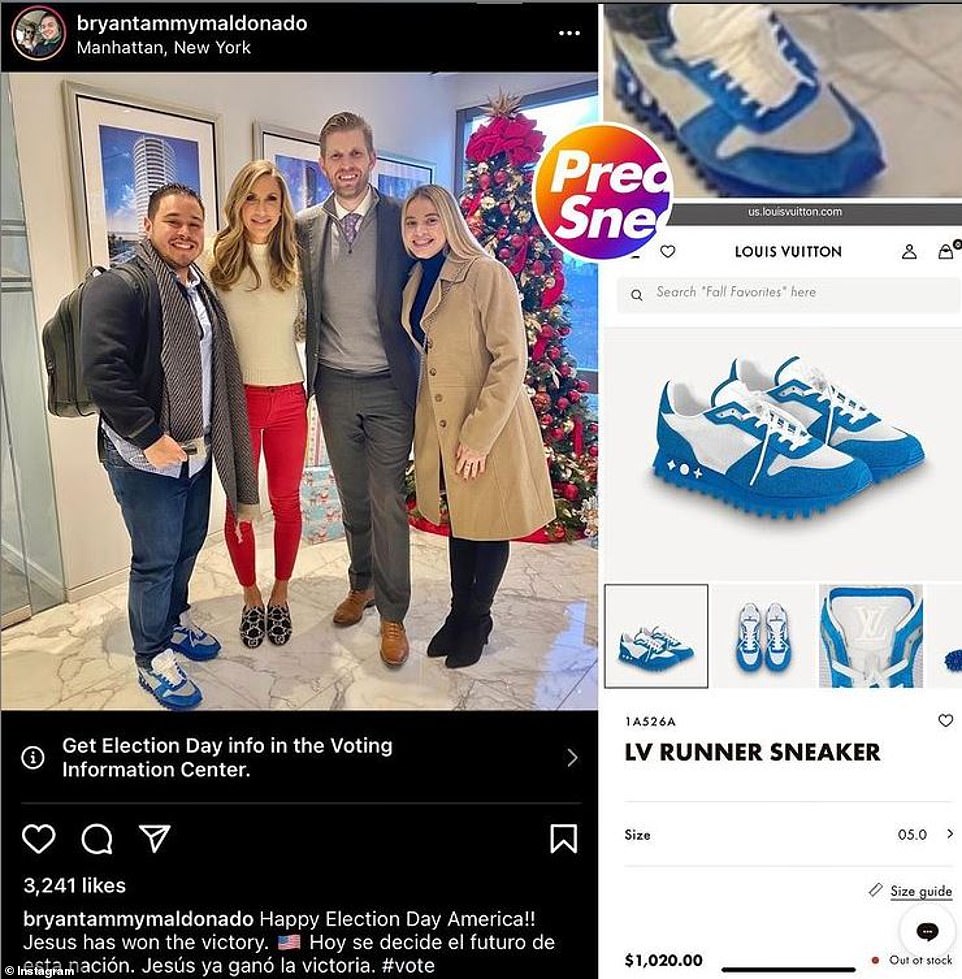 Kirby, who grew up in Ruston, Lousiana, and has a degree in marketing management and an MBA, said he began pondering the closets of America’s rich and famous pastors on a Sunday morning in 2019 when he was watching an online service at Elevation Worship, a North Carolina megachurch, and noticed a lead singer in the choir was wearing Yeezy sneakers.

He took to Instagram to ask: ‘Hey Elevation Worship, how much you paying your musicians that they can afford $800 kicks? Let me get on the payroll!’

Kirby also wondered how much Elevation Worship was paying its pastor, Steven Furtick, who stepped out in a new designer outfit nearly every Sunday.

His curiosity took off from there – and he made his first post on @PreachersNSneakers on March 18, 2019. Within a month the account gained more than 100,000 followers by poking fun at the preachers.

‘At the beginning, it was easy for me to make jokes about it,’ Kirby told the Post. ‘Some of the outfits are absurd, so it’s easy to laugh at some of the designer pieces. The price tags are outlandish.’

But Kirby said he soon began to ask more serious questions about the pastors he showcased – including whether it was right for them to be profiting off of their religion to the extent that they could buy designer labels. 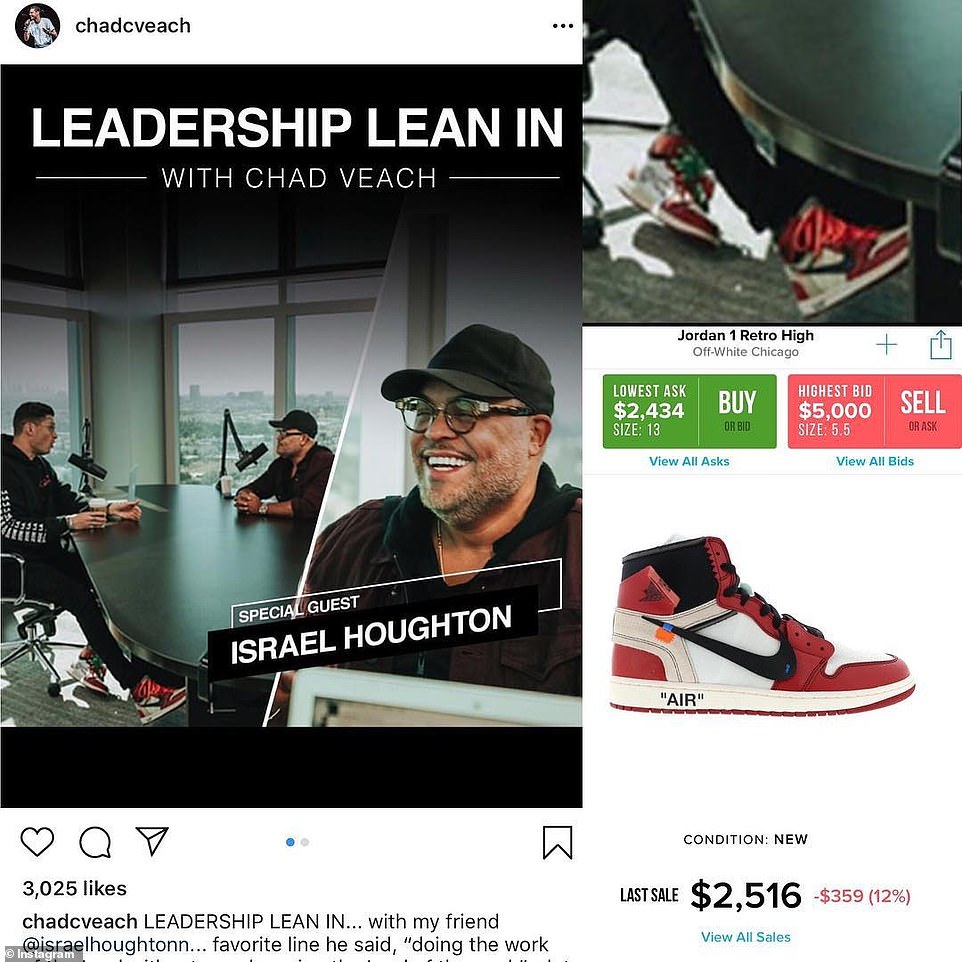 Chad Veach, who runs the hip Zoe Church in Los Angeles, was seen sporting a pair of $2,500 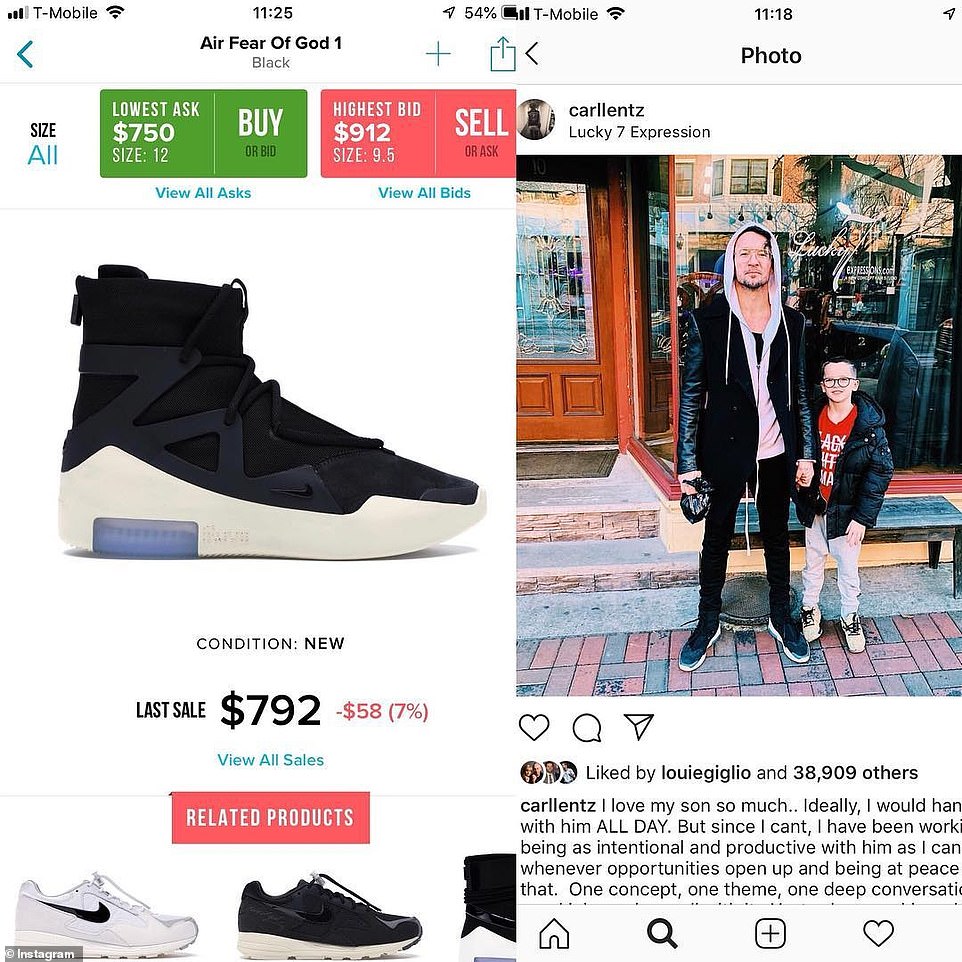 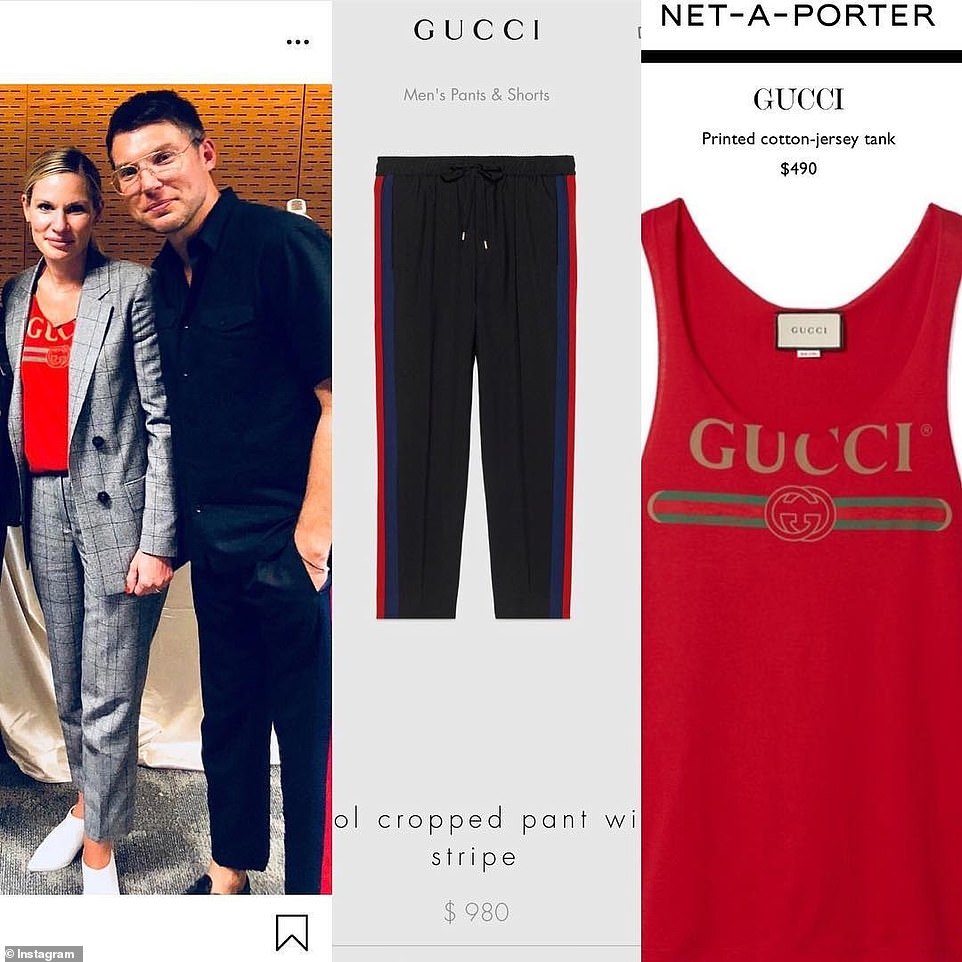 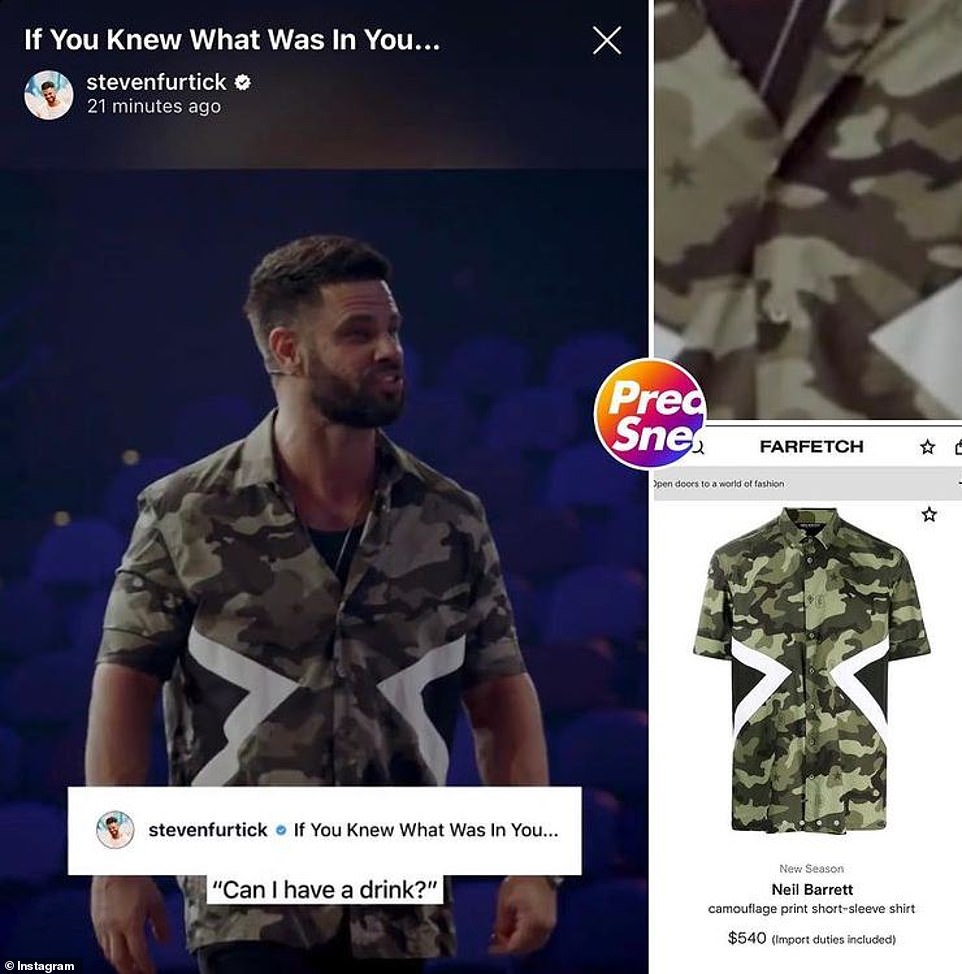 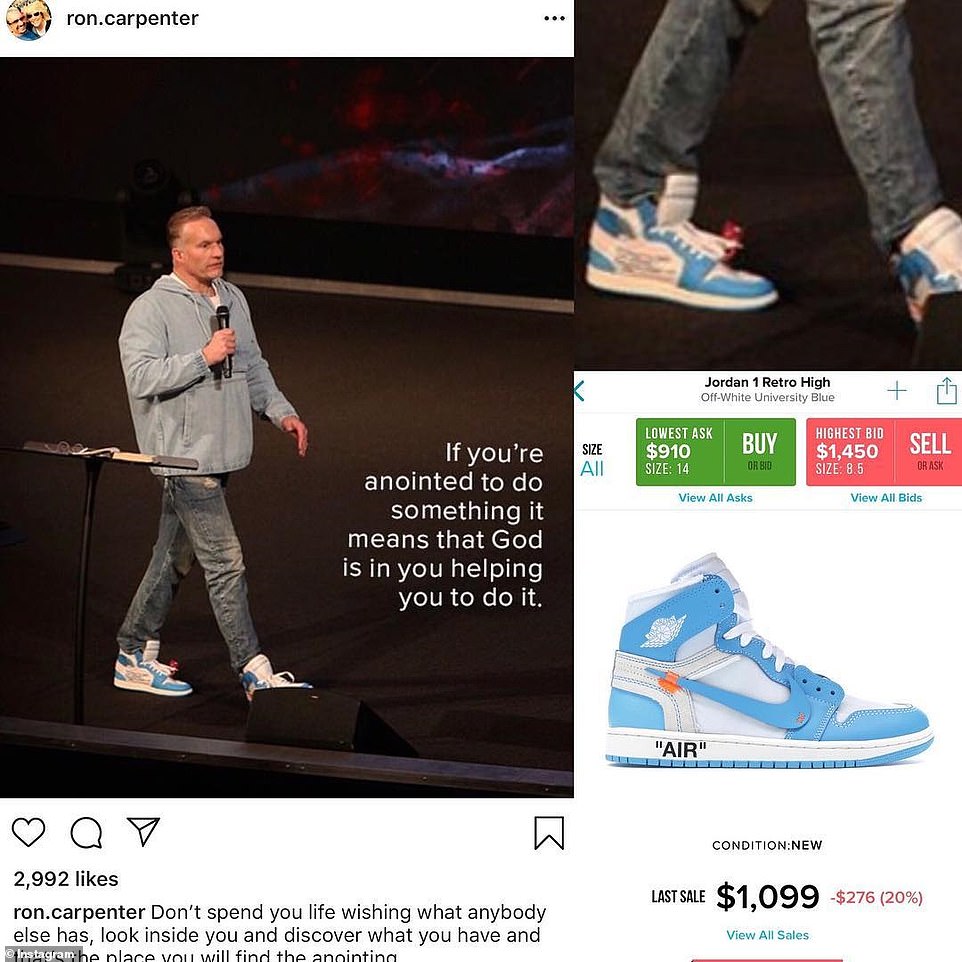 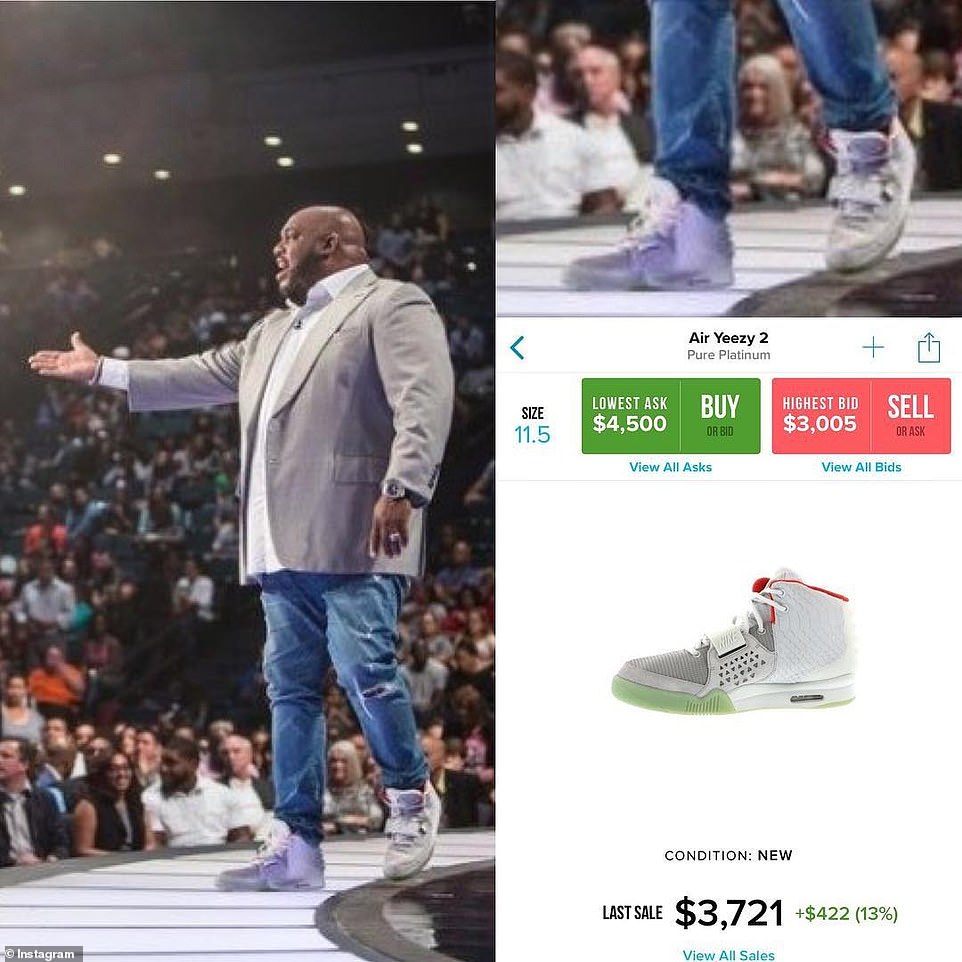 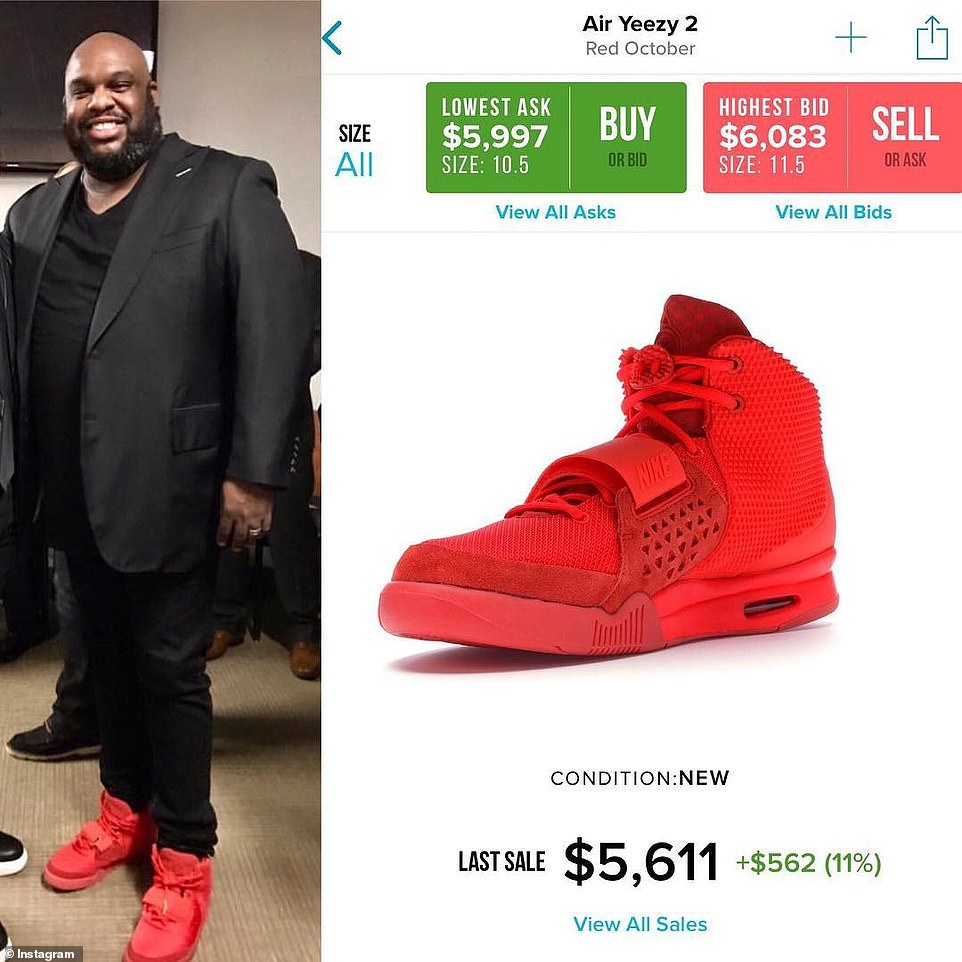 Pastor Gray seems partial to the Yeezy 2, which he has sported in multiple colors 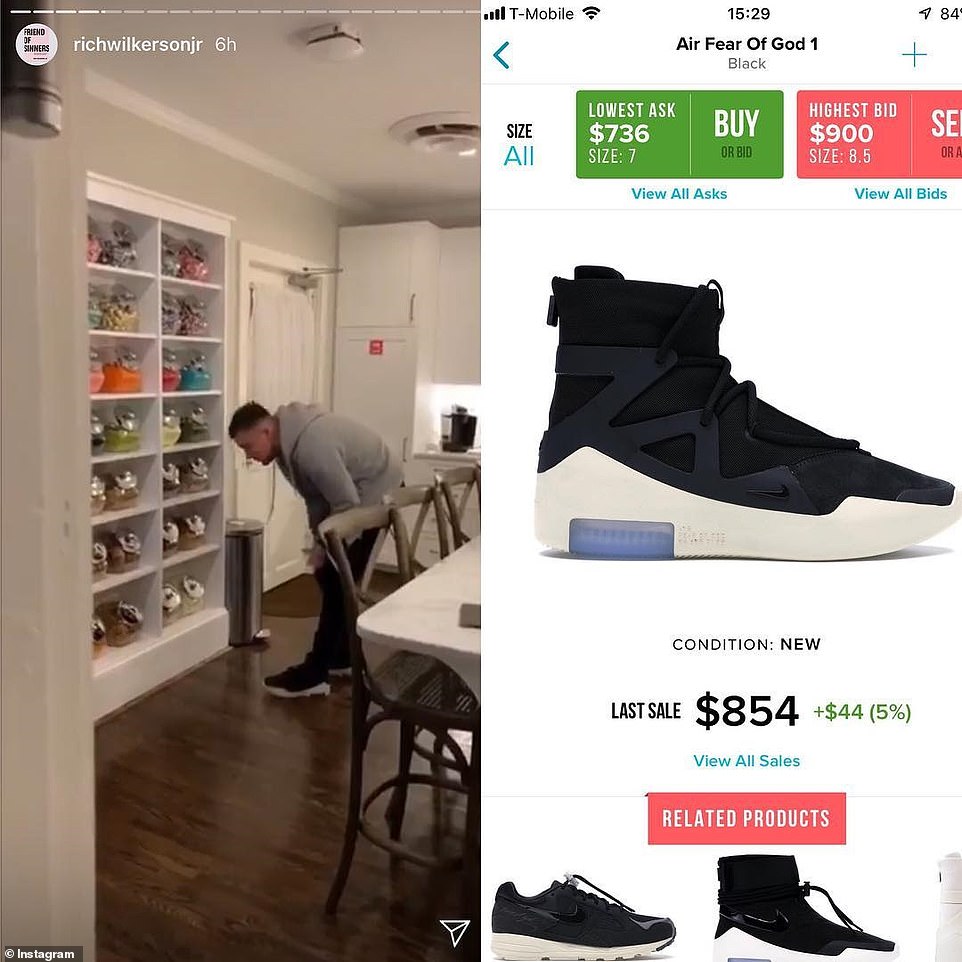 ‘I began asking, how much is too much?’ Kirby said. ‘Is it okay to get rich off of preaching about Jesus? Is it okay to be making twice as much as the median income of your congregation?’

Those are some of the questions Kirby grapples with in his new book, PreachersNsneakers: Authenticity in an Age of For-Profit Faith and (Wannabe) Celebrities.

The book examines how the style of modern pastors has morphed dramatically in recent years, with wardrobe serving as both a sign of status and a means to reach more people on social media.

‘Gone are the days of a choir, suited up pastor and random people sitting in velvet chairs onstage. No,’ Kirby wrote in the book.

‘Now it’s a U2 incarnate worship band, perfectly placed LED wash lights and a pastor … motivating, edgy and might even let a cuss word slip if you’re lucky.

‘Like Hollywood — a world so often criticized by the pietistic — these institutions and their leaders celebrate and reward the “blessing” of fame, popularity and influence.

Kirby said he hopes his Instagram account and book will inspire other people to ask the same questions he has about the potential problems with celebritizing religious leaders.

‘I’m getting people to question the status quo within the church and hopefully push for a reevaluation of what we value,’ he said. ‘People aren’t going to reach God without this guy wearing Yeezys? Come on.’ 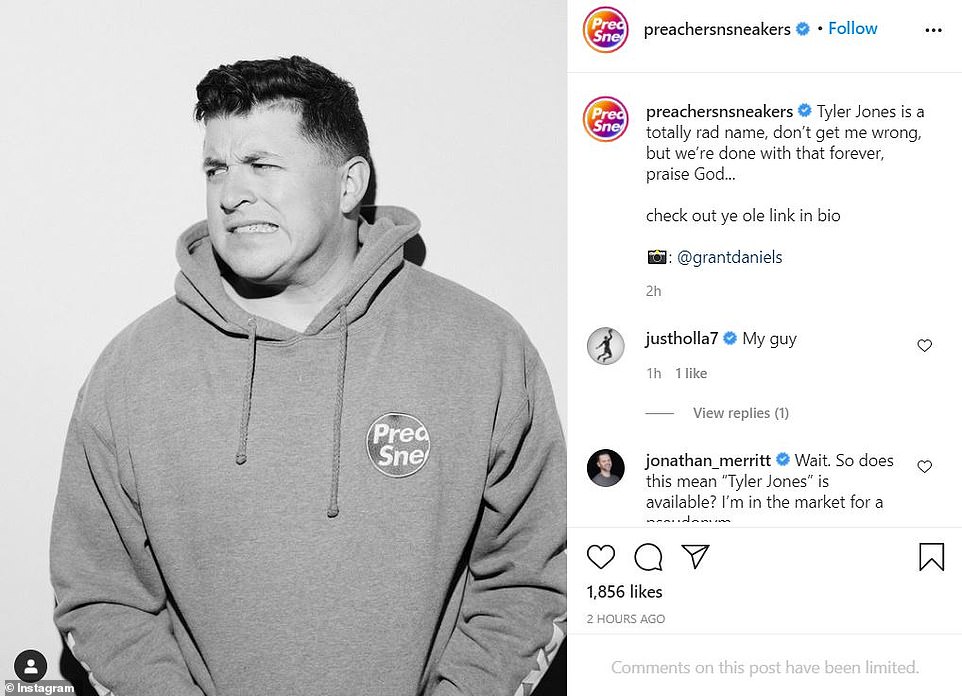