The US health agency has rowed back on a bold claim made by its director that ‘vaccinated people do not carry the virus’ and said she was ‘speaking broadly’.

Dr Rochelle Walensky, chief of the Centers for Disease Control and Prevention, said in a TV interview this week: ‘Vaccinated people do not carry the virus, don’t get sick, and that is not just in the clinical trials but it’s also in real world data.’

The CDC has now distanced itself from the claim, issuing a statement that ‘the evidence isn’t clear’ and saying its director made a generalisation in her interview.

The health body, which fills roughly the same role as Public Health England, this week published a study showing that Pfizer and Moderna’s jabs prevent around 90 per cent of coronavirus infections.

Vaccines are working well and protecting people, experts say, but one urged people ‘don’t think for one second that they cannot get infected’.

Dr Walensky’s comments are not backed by evidence that the Pfizer and Moderna jabs can totally stop transmission – that claim hasn’t been made about any vaccine though most of those tested, including AstraZeneca’s, appear to seriously reduce it.

The warning echoes comments made by UK Prime Minister Boris Johnson today, who said in a Q&A that vaccinated people still can’t meet indoors under social distancing laws because the jabs ‘are not giving people 100 per cent protection’. 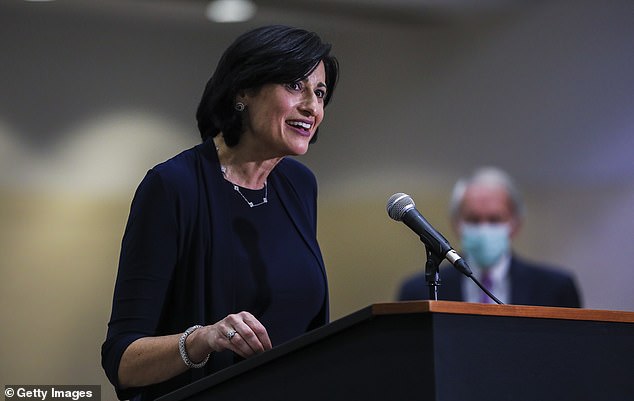 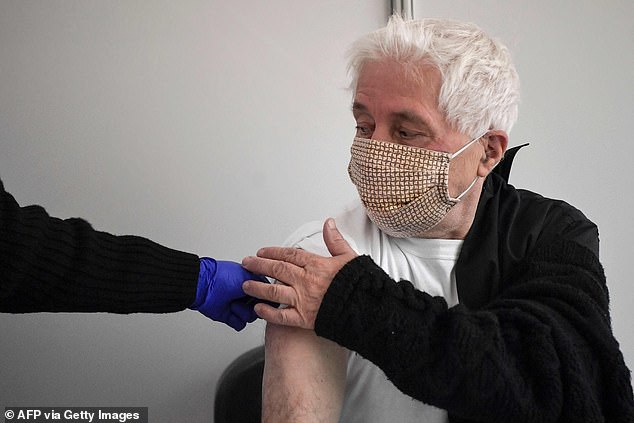 A study published by the organisation, full name Centers for Disease Control and Prevention, this week found that Pfizer and Moderna’s vaccines appear to prevent 90 per cent of all infections, including those without any symptoms, which experts said raises hopes they will stop most transmission – but not all of it and not for definite. (Pictured: A man is vaccinated with the Moderna jab in Athens, Greece, today)

‘It’s possible that some people who are fully vaccinated could get Covid-19.

‘The evidence isn’t clear whether they can spread the virus to others. We are continuing to evaluate the evidence.’

Dr Walensky did not elaborate on her comment but admitted later in the interview that it was vital for the US to bring transmission down with social distancing while the vaccines were rolled out.

The CDC published a study this week, however, which showed that the Moderna and Pfizer vaccines appear to stop 90 per cent of all coronavirus infections, including ones that don’t cause any symptoms.

The research, carried out on 3,950 key workers in the US of whom 2,956 got a vaccine, tested people for coronavirus every week for three months.

It found that cases tumbled 90 per cent in people who had been fully immunised and 80 per cent after a single dose.

Although it couldn’t prove that people who don’t test positive can’t spread the virus, scientists hope this will be the case.

A test looks for detectable levels of virus in the airways, and if there isn’t any it is unlikely that someone can spread the disease to someone else, even if it’s in their body in tiny amounts.

The CDC paper said: ‘The findings complement and expand upon these preceding reports by demonstrating that the vaccines can also reduce the risk for infection regardless of Covid-19–associated illness symptom status.

‘Reducing the risk for transmissible infection, which can occur among persons with asymptomatic infection or among persons several days before symptoms onset, is especially important among health care personnel, first responders, and other essential and frontline workers given their potential to transmit the virus through frequent close contact with patients and the public.’

And it might also fuel criticism that governments aren’t being totally open about evidence or jumping to conclusions – that saying vaccines stop all infections was a big leap from vaccines stopping most infections.

Dr Paul Duprex, a vaccines researcher at the University of Pittsburgh in Pennsylvania, told the New York Times: ‘It’s much harder for vaccinated people to get infected, but don’t think for one second that they cannot get infected.’

He added: ‘Clearly, some vaccinated people do get infected.

‘We’re stopping symptoms, we’re keeping people out of hospitals, but we’re not making them completely resistant to an infection.’

Trials of the Oxford University/AstraZeneca vaccine, which is likely to be the world’s most used jab by the time the pandemic is over, suggest it is able to significantly cut rates of virus transmission.